Tashkent City: Is ‘Progress’ Worth the Price Being Paid in Uzbekistan? 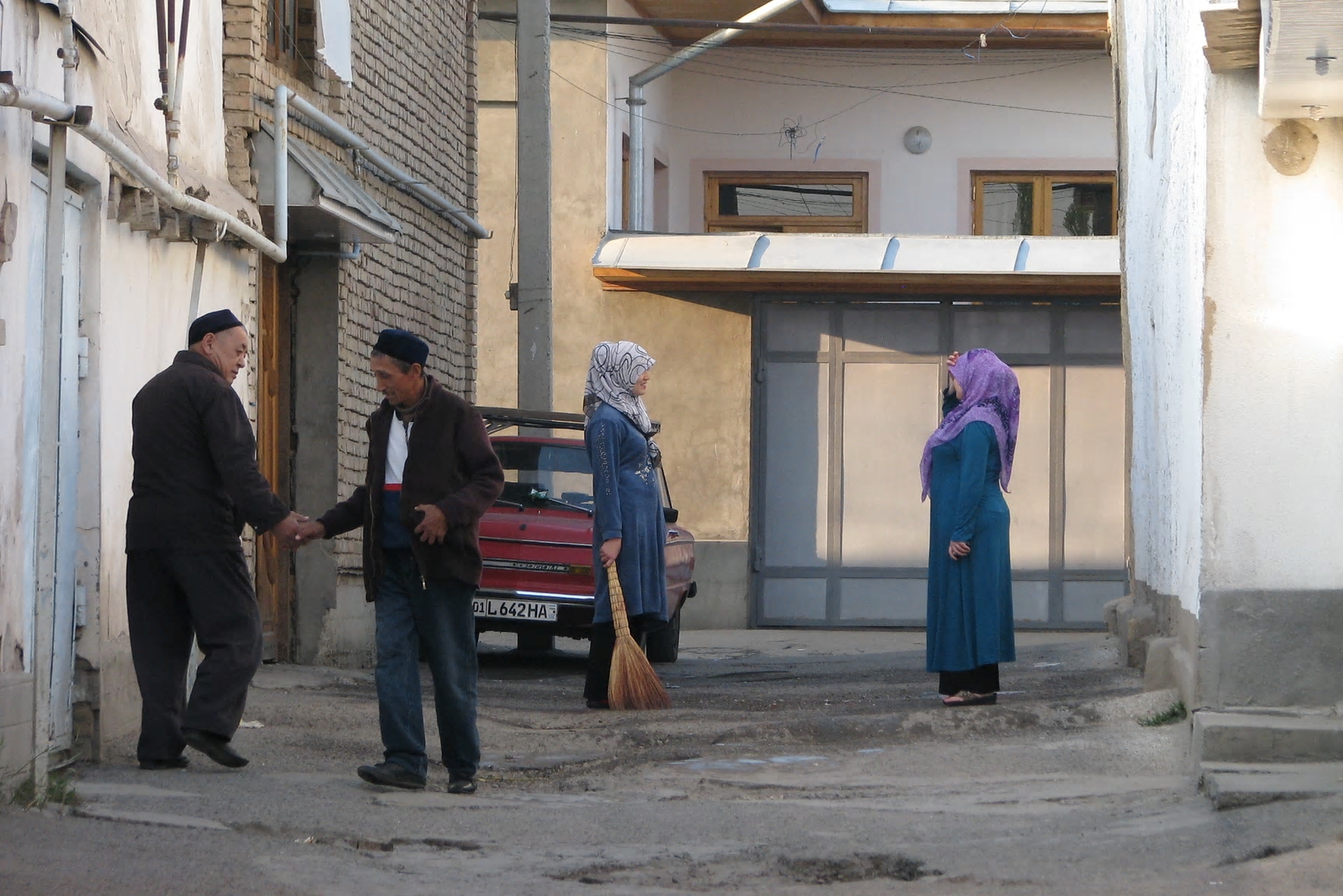 Residents of Tashkent’s Old Town, near other ancient mahallas which are earmarked for demolition. Many local people are resistant to moving out of the city centre and being cooped up in a flat. (Photo: Joanna Lillis)

The silver skyscrapers of Tashkent City are intended to declare Uzbekistan’s capital ‘open for business’. But for the residents of the historic mahalla districts, the cost is extreme.

Abdujalil Azimov sits on a stool listening to Uzbek pop on a transistor radio as his sheep graze contentedly in the evening sunshine on a strip of grass in the centre of Tashkent, the capital of Uzbekistan.

In front rises a line of gleaming white marble blocks containing opulent new flats. Behind him sprawls Olmazor, a centuries-old higgledy piggledy settlement of wattle-and-daub houses that harks back to the ancient history of this central Asian city that was once a pitstop on the Silk Road.

But unlike his ancestors, Azimov (a pseudonym, names have been changed to protect anonymity) will not live out his days in his birthplace: Olmazor is slated for demolition. His house, where he lives with his wife, children and five grandchildren, will be bulldozed along with hundreds of other homes.

In their place will rise a glitzy development of silver skyscrapers housing business centres, luxury apartments, hotels, offices and leisure facilities that the government hopes will put Tashkent on the international map.

In the ambitious vision outlined by Uzbekistan’s president, Shavkat Mirziyoyev, who came to power a year ago following the death of his dictatorial predecessor Islam Karimov, the new development, called Tashkent City, will become a magnet for foreign investors, kickstarting an economic revolution to transform the Uzbek capital into a business hub for central Asia and beyond.

With 2.4 million inhabitants, Tashkent is the region’s largest and most populous city, and in the Russian and Soviet colonial eras was central Asia’s political and cultural heartland. But during Karimov’s long rule, from before the collapse of the USSR in 1991 (which propelled Uzbekistan into independence) until his death last year, the Uzbek capital became a sleepy backwater, shunned by investors put off by basket-case Soviet-style economic practices and the government’s track record of grabbing their assets.

Now, Mirziyoyev has embraced sweeping reforms intended to polish Uzbekistan’s reputation as an investment destination – and Tashkent City is all part of the plan. It’s “a tangible sign that says: we are open for business”, as Bakhtiyor Nishanov, an analyst at the Washington-based International Republican Institute, puts it.

To build Tashkent City, the government has earmarked land around the size of a hundred football pitches slap bang in the city centre, near the Chorsu market, one of central Asia’s oldest and most vibrant bazaars, an area where mediaeval mosques and madrasahs rub shoulders with Stalin-era neoclassical edifices. Such juxtapositions embody Tashkent’s eclectic architectural heritage, which runs the gamut from glittering turquoise-domed mausoleums to the showy white marble structures favoured in post-independence Uzbekistan – a style critics deride as “dictator chic”. The tsarist colonialists left their mark in imposing rusty-hued brick structures, as did the Soviets in grandiose civic buildings and drab prefab tower blocks, livened up here and there with colourful murals depicting Uzbek motifs.

The history of Tashkent (meaning “stone city”) dates back over two millennia, but most of its ancient architecture has been destroyed by upheavals both manmade and natural: from the sacking of the city by Genghis Khan in the 13th century to a devastating earthquake that razed swathes of it in 1966.

Throughout all this, Tashkent’s close-knit Uzbek communities have lived on – in the Eski Shahar (Old Town) beloved by foreign tourists near Chorsu bazaar, where some houses date from the 14th century (although most are much more modern), and in the areas slated for demolition to build Tashkent City a stone’s throw away: Olmazor (“apple orchard”) and Oq’chi (meaning “fletcher”, harking back to a distant past when arrows were made here). Situated near Tashkent’s flying saucer-shaped Soviet-era circus and the squat Pakhtakor metro station, the mud-brick houses dotting the meandering lanes of Olmazor and Oq’chi reveal little from outside, but open on to airy courtyards where vines trail and fruit is laid out drying for the winter in the warm autumn sunshine.

Most families have lived here for generations – but now they will have to go. “Tashkent City is going to extend from up there down through all these mahallas,” says Dilnoza Ikramova, a housewife wearing a pink hijab (most Uzbeks are Muslims, though not all practising), using the word for “neighbourhood”. “They’re going to knock all this down.”

Uzbeks have a strong sense of family and community, so the breakup of the mahalla will be tough. “It’s a shame, of course. I’ve lived on the street all my life. My three brothers live in these houses with their families,” she says, gesturing down a narrow lane as a couple of boys kicked a dogeared football nearby. “I was born here, but what can you do? It’s the state that decides.”

Like many others, she hopes the authorities will rehouse her extended family together, but so far official information is sparse. Bureaucrats are totting up how many people live here – but “no one knows”, shrugs an official sitting in the district council office. Rehousing the inhabitants will be a mammoth task: 12 people from three generations live in Ikramova’s house, which is fairly typical.

Back in 2008, it was estimated that 10,000 people would need resettling from these districts, which have long been earmarked for demolition under an urban regeneration strategy that involves replacing mahallas like Olmazor and Oq’chi – which look like mediaeval villages in the heart of a 21st-century city – with modern dwellings and business developments.

Most people here believe they will be offered flats in the suburbs, as their neighbours were when an adjacent district was knocked down several years ago. Ikramova is keen to move to an apartment with modern conveniences and running water, which the homes here lack – but others are resistant, both to moving out of the city centre and to being cooped up in a flat.

“I don’t want to live in a box,” says an indignant Nilufar Aripova, who was sweeping the street outside her house, dusty after Uzbekistan’s long hot summer. “I’ve lived in Olmazor all my life, for 52 years. I was born a few streets away and moved here to my husband’s house as a kelinka [a young bride].”

“I don’t want to leave this mahalla, but if I have to I want to be given another house big enough to keep us all together,” adds Aripova, who lives with her husband, three children and several grandchildren. The state may offer land instead of a flat – but the inhabitants would likely have to build their own houses on it at their own expense.

They “will be offered various alternative options” that are yet to be decided, says Bahrom Rizayev, an official in charge of attracting investment for Tashkent City, but the planners are determined to “make sure they all get satisfactory new housing”.

So far, despite Mirziyoyev’s investor-friendly reforms, western entrepreneurs are not queuing up to flash their cash in Uzbekistan. However, Rizayev says Turkish and Chinese investors have expressed interest in Tashkent City, and “the list will gradually grow”, adding, “great positive changes are taking place in our economy, so we believe our project will be a success”.

Tashkent City will change the face of Uzbekistan’s capital – and turn upside down the lives of the people living in these old mahallas, whose eviction is the price to pay for gentrification. Azimov, the man tending his livestock in Olmazor, supplements his meagre pension by keeping a few sheep at home, grazing them outside to fatten them up before selling them. “I won’t be able to this when I’m living in a flat,” he says, with a wry smile.

But some of those facing eviction are looking on the bright side. “We’ll be resettled or given compensation,” says Feruza Ahmetova, a smartly turned-out fiftysomething housewife with a row of gold teeth – a status symbol in Uzbekistan – and elegantly coiffed silver hair. “This is being done for all of us, for all of Uzbekistan. I hope Uzbekistan prospers, and I hope Tashkent prospers too. It’s progress.”

Editor’s Note: This article was produced in collaboration with EurasiaNet.org and originally published by The Guardian. See more stories on Guardian Cities.