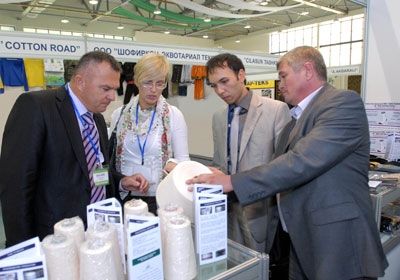 Tashkent's 6th international cotton and textile fair opened this week, and Uzbekistan's state media trumpeted the event, initiated by President Islam Karimov, as a triumph of the national economy and the dictator's "Uzbek model of reform" practiced for the last 20 years since independence.

Once again, the government web site gov.uz trotted out figures claiming a stunning growth of the GDP -- numbers that are difficult to check given heavy state control over information and persecution of independent journalists.

The event is not only a source of a good chunk of Uzbekistan's foreign currency revenue -- Tashkent took in $500 million in orders last year and expects more this year -- it also serves to further glorify the state:

"The Conception for further deepening of democratic reforms and formation of civil society in our country designed by our head of state has opened up a new stage of democratic market reforms and liberalization of the economy," gushed the government website."

Yet agriculture remains under state control as it did in the Soviet era, with farmers forced to meet state quotas and sell their cotton at fixed prices. With the high price of cotton and the drought in Uzbekistan this year, farmers have been pressured more than ever by local administrators.

Some farmers in Surkhandarya last month who were unable to produce their state quotas were thrown in jail, and sadly one man, Ismail Turanazarov, committed suicide. He left a note that he was unable to get fuel or a loan for his crops -- an all too common story, according to human rights monitors in Uzbekistan. State propaganda claims that farmers can get favorable loans to develop their land, but activists report that many banks are corrupt and officers loan only to government officials and their relatives.

The monitors also report widespread use of children as young as 10 and 12 in the fields, in the 5th through 7th grades, laboring alongside their teachers in many cases and exposed to cold, lack of food, dust, and pesticides. Through great risks, activists have been able to get out numerous pictures and videos documenting the exploitation of children and adults.

Such conditions have prompted human rights and labor groups to look for various ways to publicize the issue, including at a picket of President Karimov's daughter Gulnara when her designs were shown on a Manhattan runway. More than 60 companies and an apparels trade association have now pledged not to source their cotton in Uzbekistan. Yet most of them are from the US and European Union; 330 other companies from 38 countries around the world showed up at the Tashkent Cotton Fair this year -- as the government boasts -- 30 more than last year.

Does that mean that the boycotts don't make a difference and can't make a dent in the demand? Uzbekistan in fact has forged new trading partnerships with Pakistan this year as floods reduced the harvest last year, and has enjoyed increasing cooperation with South Asian countries.

Yet from the state propaganda, it’s clear the regime craves legitimacy, and that can be a lever for change. A centerpiece of the gov.uz article (only in the Russian edition ) is mention of Christian Schindler of Germany, director of the International Textile Manufacturers Federation; Ray Butler of the International Cotton Association and other traders who were portrayed as praising their partnership with Uzbekistan and its great prospects at the fair. These are the kinds of people that activists are increasingly reaching.

Even without an immediately visible impact, the boycott seems justified as a moral task, and one that activists don't seem to expect to work instantly. Already, some results have become apparent. The European Parliament's Foreign Affairs Committee voted to end favorable tariffs for Uzbekistan under their trade agreement, and the International Trade Committee will vote on the issue November 22.

Uzbekistan is sensitive enough to world public opinion that it ratified the International Labor Organization's conventions against child and forced labor, and has lurched between saying there is no forced labor, to saying that it is successfully monitoring and eradicating it -- although the conditions have not been verified as Tashkent has not permitted an ILO inspection team to enter the country.