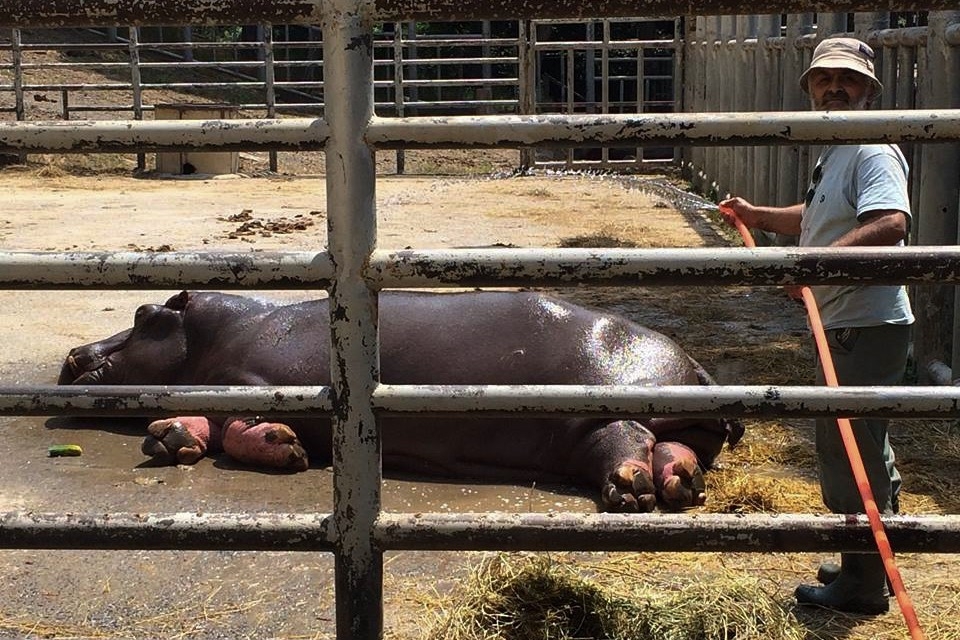 Sixteen-year-old Begi, the male hippo who made headlines after a June 13-14 flood left him free to waddle into Tbilisi's city center, takes it easy back at the zoo. (Photo: Monica Ellena)

Few places are as silent as a city of 1.2 million the day unknown numbers of wolves, lions, tigers and bears are reported to be at large. But now, one day after a June 13-14 flash-flood destroyed Tbilisi’s city zoo, killing some 13 people, and wiping out houses and a highway, into that silence has come a cacophony of questions.

Prime Minister Irakli Gharibashvili has announced that an investigation will be held into the reasons for the massive damage caused by the flood, touched off when heavy rain prompted a stream that runs through a gorge in the city center to overflow.

Questions have been raised, he noted, about the way the highway that bordered the zoo – the so-called New Road, built at the end of President Mikheil Saakashvili’s administration – was constructed.

If the construction is found to be faulty, the question of the responsibility of “those people, who, for years, did not pay attention to the situation,” has to be asked, he stressed, Internews reported.

Finance Minister Nodar Saduri announced that the initial damage estimate of 40 million laris (about $19 million) would not “be sufficient” to repair all the damage done, news agencies reported.

In an effort to allieve the strain on roads from the loss of the highway, Gharibashvili on June 15 asked Tbilisi residents not to use their cars except in cases of emergency. Gigantic potholes have appeared in two main thoroughfares not far from the flooded area – a possible sign of underground water.

Such developments appear to have prompted President Giorgi Margvelashvili to raise the question of urban planning. “The question of the cause of the flooding shouldn’t go to politicians, but to urban-designers, architects and city-development specialists,” he claimed, news outlets reported.

June 15 was declared an official day of mourning and a non-working day.

The number of fatalities is expected to increase as recovery work continues. Fourteen out of 24 missing people have been found, however, according to the interior ministry. Some 45 families whose houses were destroyed or swept away by the flood waters have been given accommodation in hotels.

The National Guard was dispatched on June 15  to clear up the flood damage, with roughly a hundred at work in the destroyed former zoo, an off-limits area under police-guard.

Some progress appears to be made, with Tbilisi Mayor Davit Narmania announcing that a degree of normal traffic could be restored to the city center by Tuesday.

Yet somehow, amidst the confusion, the government forgot to tell Tbilisi residents, who had been ordered off the streets on June 14 to avoid zoo predators, whether or not it was safe to come out again.

In some spots, it wasn't. At least, not for certain. At latest report, a hunt is underway for a black panther spotted in the neighborhood of Vake, a relatively upscale neighborhood not far from the downtown area. Sightings of wolves and tigers also have filtered in from throughout the city.

With little coordinated information for the public about escaped animals – and no continuous live TV coverage about flood-cleanup efforts  – much information comes via secondhand reports, however.

The exact number of animals which remain at large is still unknown.
Reportedly, “more than half” of the zoo’s original collection of 600 animals were killed by the flood or bullets or have disappeared. Three zoo employees died amidst the flooding.

A dog shelter, already damaged by heavy rains, was also taken out by the flooding, but has received relatively little international attention.

Though the zoo-animals gained the media spotlight, confusion over their status has added to public anger at the reported shooting deaths of many of them.

The degree to which coordination existed between the zoo and armed special forces sent in to track down escaped animals remains unclear. The zoo had urged residents via Facebook and on television not to shoot at animals themselves.

Television provided some gruesome details of the search – one truck, apparently belonging to the city sanitation service, with a few lions’ bodies; another containing six wolves shot dead near a children’s hospital.

A zoo-celebrity, Shumba, a young, white male lion known throughout Tbilisi for his friendship with a black poodle, was found dead under a zoo wall, apparently killed by a bullet. (The poodle, called Kakula, survived.)

Wearing a mud-stained shirt, an exhausted Zoo Director Zurab Gurielidze appeared on a late-night TV talk show on June 14 to slap back as “insulting” claims that the zoo itself had hunted down animals in the street.  He stressed that the “maximum” would be done to protect those that remain.

Patriarch Ilia II, arguably the country’s most powerful public figure, ventured his own opinion on the cause of the flood’s damage – the Soviet decision to use materials taken from monasteries and churches to pay for the zoo’s construction, he alleged.

The comment reignited a longstanding, bitter debate over the role of the patriarch and the Georgian Orthodox Church.

Some good news, though, did exist. A bear photographed perched atop an apartment’s air conditioner was later removed to a shelter, Rustavi2 reported. Another bear was safely recovered from the grounds of Georgia’s public television station. A lost crocodile was found. A python did not escape.

The flood’s best-known animal survivor, a hippopotamus who had waddled into the city center, also was safely back in a section of the Tbilisi zoo's territory on June 15.

Among many local volunteer-efforts, international partners have offered support along with condolences. Offers of help also have come from zoos in the UK, Russia, and Switzerland have been received, with specialists from Israel and the Czech Republic already on the way.

But making sense of the long-term consequences of the flood may take more time, and offer fewer immediate answers.

The time, though, is relatively short. Rain is again predicted for this weekend.