As anti-Russian sentiment rises in Georgia, the many Russians here share Georgians’ shock and disgust at what is happening in Ukraine. 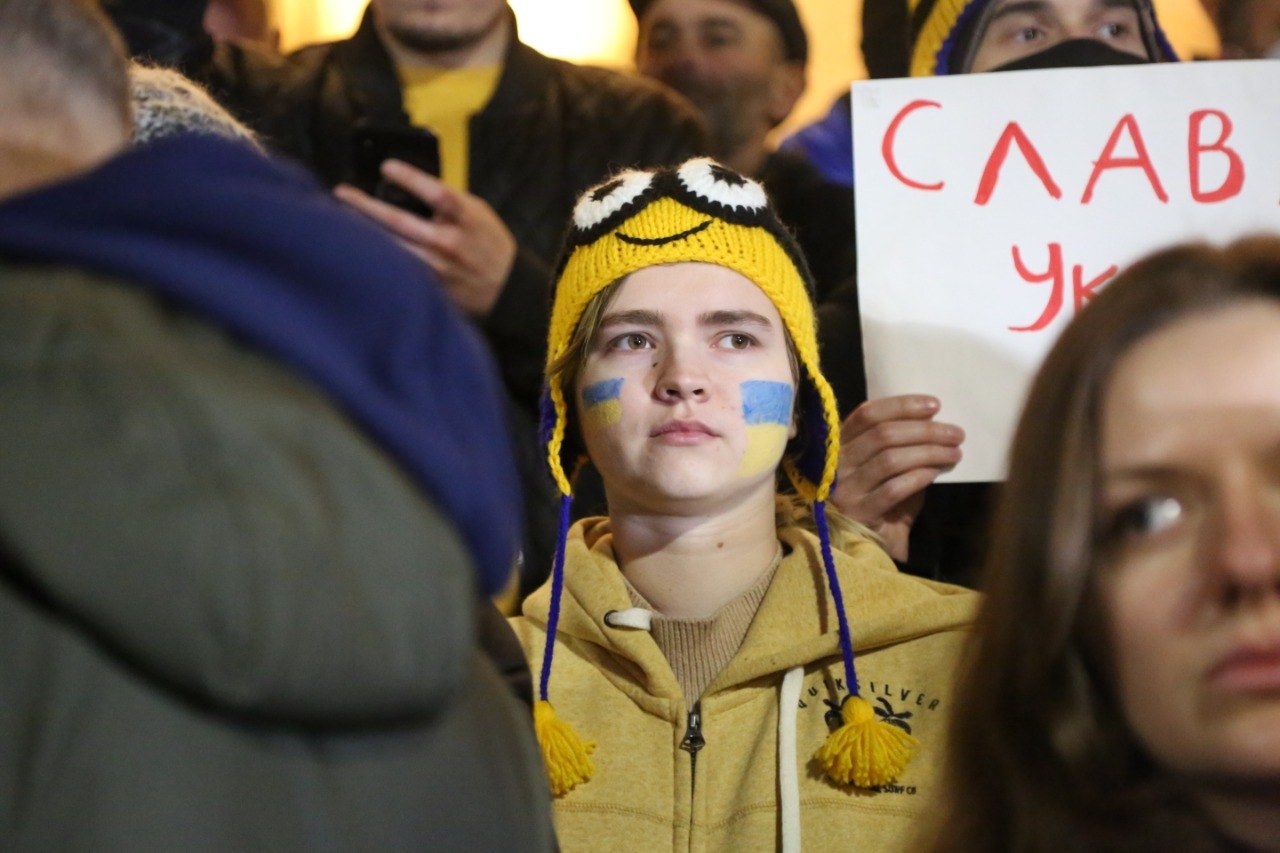 When Natalya Bedina walks outside her home in Tbilisi’s old town these days, she covers her head with a hoodie and a facemask. “I have a clearly Russian face and I don’t want people to look at me askance,” she says. “I’m also trying not to speak Russian.”

A Muscovite who moved to Tbilisi about a year ago, Bedina was shocked – like everyone else here in the Georgian capital – by her country’s invasion of Ukraine. She went to anti-war rallies in the city center, shared images of the war on social media and had been glued to Russia’s only critical television channel, Dozhd, until it finally buckled under the Kremlin’s pressure this week.

The tragedy unravelling in Ukraine felt personal to Bedina, as it does for many mixed families on both sides of the Ukraine-Russia divide: Her grandfather was Ukrainian.

But soon she saw that the anger in Tbilisi against the Russian invasion began stinging ordinary Russians like her.

Over the last several years, Tbilisi has become home to unknown thousands of Russian expats, for the most part liberal professionals who are attracted to Georgia’s relative freedom and easy way of life. They typically keep their head down politically in a country where resentments against Moscow run strong, not least due to Russia’s attack on Georgia in 2008 and the festering consequences of that war.

Now, the city’s collective rage against the Russian invasion is perhaps greater than anywhere else in the world bar Ukraine. Many feel an affinity with Ukrainians, who have stood by Georgians – even as volunteer fighters – in all of Georgia’s conflicts with Russia over the last decades.

Tbilisi has thus been rallying non-stop, and in unprecedented numbers, to express its solidarity with Ukrainians, condemn their own government’s cautious stance, and denounce Russia.

The rallies have been well attended by Russian expats, several of whom have even demonstratively burned their Russian passports at the rallies. “I don’t want to belong to the world that brings destruction, death and pain. This is not my Russia,” said one Russian woman at a February 27 demonstration as she took a lighter to her passport.

Bedina was initially keen to add her voice to these outpourings. But anti-Russian sentiment has been rising in the days since the invasion began, and after she experienced a couple of incidents she grew more cautious and stayed huddled at home. First, a delivery courier dropped her groceries on the ground when he found out that she was Russian. Then, a shop assistant gave a cold look when she saw Bedina’s Russian credit card. She also heard a story of a bakery refusing to serve a fellow Russian expat.

“Should I be blamed for my government’s actions?” she said, asking a question that is on many lips in Georgia and around the world. “The whole reason I’m here is that I could not stand my government and the place that Russia has become.”

Bedina had done her share of protesting against the system built by Russian President Vladimir Putin. She was among the thousands of marchers on Moscow’s Bolotnaya Square in the early 2010s demanding fair elections and democracy. But after those ended in mass arrests, beatings, and intimidation, she grew increasingly pessimistic about her home country and chose to leave.

“I believe in peaceful protest and democratic change of government, I want that for my country, but there is only so much you can do against a brutal force,” she said. “People who come out today in Russia against the war are being arrested, threatened and some will be charged with high treason, that’s 20 years in jail,” she said.

Another Russian in Tbilisi, interior designer Zalina Ayubova, has not felt any anger directed at her specifically, but said she finds some of the anti-Russian mood understandable. “I saw a group of Ukrainians at the demonstration the other day, I wanted to go up to them and apologize, but I just could not bring myself to do it because I felt ashamed,” she said. “I think a lot of Russians will be living with shame for years, the same kind of shame Germans had after World War II.”

“I do have to ask myself: have I done enough to make sure this did not happen? Did I pay attention when Crimea happened, when Georgia happened?” she went on, referring to Russia’s 2014 annexation of the Ukrainian peninsula and the 2008 war.

Born in the Siberian town of Surgut, Ayubova had been coming to Georgia for increasingly longer stints for several years before she finally chose to move for good, giving up on Russia for reasons that are not entirely political.

“My father beat and stabbed my mother. I took him to court, but, despite the severity of my mother’s injuries, the biggest punishment you can get in Russia for a crime like this is a penalty of about $500, unless it is a repeat offense. I’ve spent far more on lawyers and my father is still at large,” she said.

“By contrast, if you just say something critical about the government online or walk around with shirt with [jailed opposition leader Alexey] Navalny’s name on it, you could get 10 years in prison,” she said. “So I just took my mother and we moved to Georgia.”

She views her family’s situation as a commentary on the bigger picture in her home country, saying that free-thinking Russians suffer from the same kind of wonton domestic abuse at the hands of Putin’s government as her mother did. She says many outside Russia don’t fully appreciate the brutality of the Kremlin’s machine of repression, the efficacy of state propaganda, and how Putin has been carefully preparing for this moment.

“It may not be easy to do now as emotions are running high, but I have to ask everyone to differentiate between the Russians who took this decision [to start a war in Ukraine] and those who are shocked by it,” she said. “You need to understand that it is far easier for me to go to the rallies, to spread the word and just to stay informed [here] than it is for people back in Russia, because I live in a free country.”

This week the Kremlin silenced some of the last remnants of a free press in Russia, shuttering freewheeling news outlets like Dozhd and Ekho Moskvy. There are now no alternatives to the TV broadcasts presenting the government’s narrative.

“People, especially poor and uneducated people, are endlessly fed stories of Russia’s righteous war on its enemies, are shown an image of a missile flying out but not the image of what happens when that missile hits the ground,” she said. “Many people back there don’t even understand how bad the Russian economy is going to get, which is very clear to us, the Russians living abroad,” she said.

Tbilisi also is home to a smaller, but growing, community of Belarusian exiles. They, too, are watching in horror as their country abets Russia’s invasion.

Yaroslav Oleynik moved with his wife to Georgia in 2020 to study human rights law, and then got stuck in Tbilisi due to the pandemic. When flights resumed, the couple was told that it was unsafe for them to return home to Minsk because of their anti-government activism.

Now, as Belarus President Aleksandr Lukashenko has lent his country’s territory to Russian forces for the attacks on Ukraine, Oleynik hopes that Ukrainians understand that his people had little way of stopping it.

“Belarus today is occupied by both by Lukashenko and by the Russian army,” Oleynik said. “Putin supported Lukashenko then and now he has come to Belarus to call in favors.”

Many Ukrainians have demanded that Belarussians come out en masse and call for withdrawal of Russian troops. In Georgia, some also are telling Belarussians that they should rally against their government the same way Georgians have come out to condemn their authorities for their refusal to join international sanctions against Russia.

Oleynik said that everyone should know the terrible cost people are paying in Belarus for speaking up. “People are being detained, tortured, many are placed in prison cells together with worst criminals,” he said.

Another Belarussian in Tbilisi said that her son chose to escape Belarus this week after he was conscripted into the army. “He fears that he will be sent to the war and will be forced to kill people, so he took his children and wife and is on his way here,” she said. She asked not to be identified by name because she fears for the safety of her remaining family in Minsk.

“My son and my daughter are angry and ashamed because of what’s happening in Belarus – we all are – but they have little children to think about,” she said.

“I think that Ukrainians for the most part understand that Belarus is being held hostage and they won’t hold a grudge in the end,” Oleynik said. “But it is different with Russia. This will take a long, long time for Ukrainians to forgive.”