The government denies blocking Asia-Plus, but only the authorities have such tools inside the country. 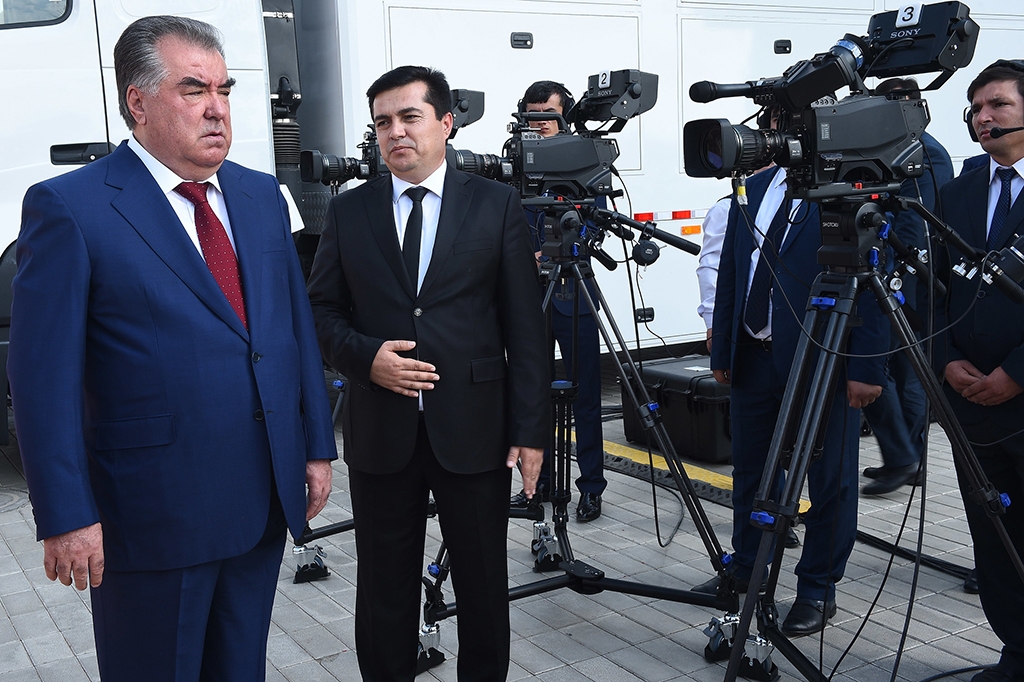 He's the only one with the tools (president.tj)

Authorities in Tajikistan have usually resorted to direct and brute-force measures to thwart independent journalists.

But in the case of Asia-Plus, a newspaper and website that survives as one of the sole remaining non-government-controlled outlets in the country, the censorship has taken a more technological tack.

“The site would suddenly be blocked, and then again unblocked,” Zebo Tadjibayeva, executive director of the Asia-Plus media holding company, told Eurasianet.

This sporadic and unexplained interference was an irritant, and yet just about bearable.

Things got a little more serious in November that year, when the website was blocked in Tajikistan definitively.

Why officials controlling the data spigot chose that time in particular is not known for certain. As to the motivations, however, there is some good circumstantial evidence.

“Until that time, certain state structures would ask that we publish materials prepared by them,” Tadjibayeva said. “Of course, they didn’t put their name to the articles. But the journalist in us took the upper hand. Out of respect for our profession and our readers, we declined to publish these articles, which were anything but journalistic.”

Nuriddin Karshibayev, the head of the National Association of Independent Media in Tajikistan, has described restrictions on access to the Asia-Plus website as flagrantly illegal.

“This is a violation of the constitutional rights of the citizens of Tajikistan. What is happening to Asia-Plus is a restriction on the free access to information, to a source of alterative information,” Karshibayev said.

As is all too typical for Tajikistan, there is an additional wrinkle to this tale of apparent censorship. The government denies that it is behind the ban.

But speaking to RFE/RL’s Tajik service, Buket Coskuner, a spokeswoman for ICANN, a U.S.-based nonprofit whose activities extend to coordinating internet domains, said that trouble at Asia-Plus appears to be stemming from manipulation of the website’s domain name system, or DNS. Coskuner did not speculate about who could have gained access to and then amended this vital piece of technical identification, which currently leads to visitors being given an error message, but she urged all sides to get together to discuss the problem.

This is frustrating advice though, since the government insists it is not at fault.

“We just have no idea who to turn to and what doors to knock. When we make verbal and written enquiries, they admit the technical error, they promise to deal with it, but it ends with that,” Tadjibayeva said.

“Without authorization from a representative of the state telecommunications service, it is hardly likely that somebody would have made changes to the DNS of the news agency. This could be rivals, or a political decision to limit freedom of speech,” he said.

Karshibayev’s suspicions are not without grounds.

Tajikistan has an unusually centralized telecommunications market. In 2016, the government devised a data spigot called the Unified Electronic Communications Switching Center, or EKTs in its commonly deployed Russian-language acronym. This arrangement requires all data entering and leaving the Tajik sphere of the internet to pass through government servers. All domain and service providers, even those ostensibly operating in the private sector, are liable to intense and unlimited interference from the state.

An IT specialist in Tajikistan who spoke to Eurasianet on condition of anonymity agreed that it was only the state telecommunications service that has the technical ability to fiddle with the Asia-Plus DNS.

“At the moment, instead of the letter ‘o,’ the DNS has the number zero. It is very similar, but the DNS is erroneous, so the traffic is going to the wrong server,” the IT specialist said.

The technician said he had no personal recollection of such sabotage being carried out against websites, but that there was a precedent of the telecommunications service simply confiscating domains from mobile phone companies.

“After negotiations, the domain would be restored,” he said.

The local scuttlebutt over Asia-Plus has linked at least one close relative of President Emomali Rahmon to talk of a possible hostile takeover of the outlet.

Tadjibayeva is skeptical of such theories though.

“I absolutely reject the idea that some takeover of the company is in the offing. Media just is not the kind of business that guarantees a stable profit,” she said. “What is more, this is a business that depends on the reputation of the people running it. If certain key people are not in the company, then things are unlikely to go smoothly.”

Pending a resolution, Asia-Plus is devising other ways to ensure readers can view their articles. Initially, it began posting material on Yandex.Zen, a Russian-owned content platform. Before long, that too was blocked, forcing the outlet to explore other options.

The government admits, incidentally, that it does resort to blocking websites, albeit only to thwart extremism. Foreign Minister Sirojiddin Muhriddin argued in remarks to reporters earlier this year that this was done at the behest of security bodies and that this policy has borne fruit.

“If you take a look at the map, you can see that we border Afghanistan. From far abroad they look at us and imagine that this country has some influence on us,” Muhriddin said. “And yet, we are one of the most stable countries in the region.”

The current solution being pursued by Asia-Plus in its unending cat-and-mouse game with the government is to diversify its channels to the public between a foreign-hosted website and an array of social media.

The website’s brand still appears to be strong. Tadjibayeva said a lot of traffic is driven to their current domain – asiaplustj.info – through Google searches like “Asia-Plus news Tajikistan.”

“That means they are looking for us. And now, thanks to our efforts, people are finding us,” Tadjibayeva said. “And then they choose where it is easier for them to read us, either on the site or on Telegram, Facebook or on Instagram. We are making every effort to make sure that our readership can get a hold of our content.”