At least five people have been killed in the fight over water. 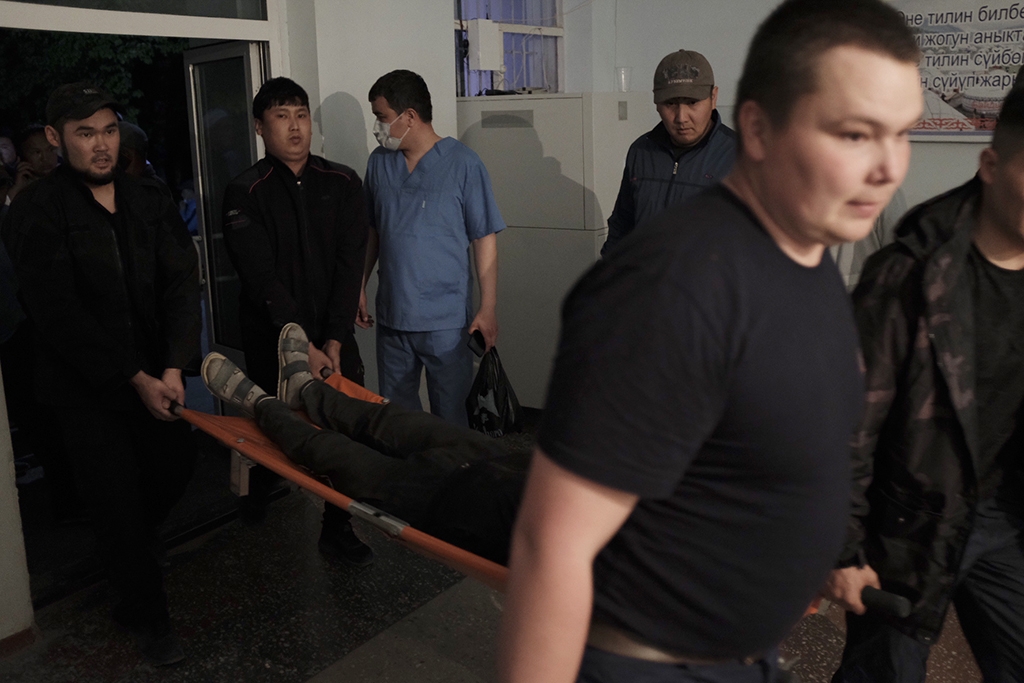 The Kyrgyz side took their wounded to the Batken hospital. (Danil Usmanov)

The armed forces of Kyrgyzstan and Tajikistan engaged in their most vicious bout of fighting in years on April 29, exchanging automatic rifle, machine gun and artillery fire in an hours-long battle over a strategic water facility.

At least five people have reportedly been killed and several dozen injured in the clashes across a disputed border where southern Kyrgyzstan and northern Tajikistan intersect.

Both governments appear on the face of things to be seeking a rapid de-escalation.

The Kyrgyz Foreign Ministry announced in the evening that it had agreed with its Tajik opposite party on a ceasefire to take effect from 8 p.m. local time and for forces to withdraw.

Bishkek-based news website Kaktus reported, however, citing local officials in southern Kyrgyzstan, that gunfire could still be heard after that hour. Meanwhile, a reporter who managed to reach Chorkuh, a Tajik town on the border, told Eurasianet he heard intense artillery fire until the ceasefire hour and that it then stopped.

Popular moods will be more difficult to contain.

An ill-tempered crowd was still assembled late in the evening in front of the regional headquarters in Batken, the capital of the eponymous southern Kyrgyz region where the fighting is taking place. A Eurasianet correspondent watched as men in the throng issued angry demands that the authorities give them weapons so that they too could join the fight.

The confrontation began in a fashion now familiar to the area of Kyrgyzstan wedged between the Tajik mainland and the Dushanbe-controlled exclave of Vorukh, although the sides differ over who is to blame.

According to media accounts from Kyrgyzstan, the trouble may have started around 11 a.m. on April 28, when Tajik laborers arrived at the banks of a cross-border river and began removing rubble. Later, Tajiks installed a close-circuit surveillance camera on a utility pole in a Kyrgyz village, precipitating an intervention from Kyrgyz local officials and border personnel, according to the same accounts.

Stone-throwing between neighboring communities ensued later in the day.

Tajikistan has offered a more elaborate theory, contending that Kyrgyzstan is bent on seizing the Golovnoi water intake facility. Irrigation water is valued at a premium in this arid area and the disputes that have arisen periodically have usually revolved around it. Social media users in Kyrgyzstan quickly began circulating photos of Soviet-era archival documents proving that Bishkek has an entirely legitimate claim to Golovnoi.

An already tense situation degenerated overnight as weapons started being used. Police in the southern Kyrgyz region of Batken said gunshots were fired from Tajikistan at a military outpost at 5:45 a.m. on April 29 and that Tajik residents threw stones at Kyrgyz cars on the highway hugging the border shortly after that.

This escalation of events prompted the Kyrgyz government to declare a state of emergency in three villages – Ak-Tatyr, Ak-Sai and Samarkandek – and to start evacuating residents. More than 800 people have been moved away from the area where fighting is taking place.

Tajik security bodies have not denied deploying live fire, but they say that their side too had come under attack in the morning. One man in his 30s was struck in the head by a bullet and admitted to the hospital in a grave condition after a bout of shooting at around 10:45 a.m., they said.

Fighting intensified throughout the day and spread beyond the Golovnoi facility.

The Kyrgyz State Committee for National Security, or GKNB, said in an evening statement that Tajik armed forces had attacked three of its border outposts and two border checkpoints. One border outpost, Dostuk, burst into flames after being struck by mortar fire, the GKNB said. But the Kyrgyz say they also inflicted a counterblow.

“In response to the actions of the Tajik security officials, the GKNB’s Boru special-purpose detachment seized the Tajik Republic’s Khoja Allo border,” the agency said in its statement.

The Tajik government has not commented on any of these claims.

Signs of a possible imminent confrontation have been evident for weeks now.

A war of words was triggered in late March when the head of the Kyrgyz State Committee for National Security, Kamchybek Tashiyev, proposed in provocative fashion that Tajikistan should yield Vorukh, a fertile exclave surrounded by some of the most barren land in Kyrgyzstan, in exchange for a parcel of territory from the Batken region.

The cross-border villages where unrest routinely breaks out lie adjacent to the Kyrgyz-controlled roads leading from the Tajik mainland to the Vorukh exclave.

Some days after Tashiyev made his remarks, Kyrgyzstan held military exercises in its Batken region. Fully 2,000 soldiers, 100 tanks and armored personnel carriers and around 20 units of self-propelled artillery were involved in the drill.

On April 9, in what may have been a response to those mobilizations, Tajik President Emomali Rahmon paid a visit to Vorukh to offer assurances to residents that talk of surrendering the enclave was off the table.

“I urge you to live with your neighbors in a friendly and good-neighborly manner, remain calm and do not yield to emotions, because all problems must be resolved wholly through negotiations,” Rahmon said in a speech that same day in the nearby town of Isfara.

A pair of strange and troubling incidents followed a few weeks after that.

On the night of April 24, two young Kyrgyz road construction workers camped out in a location near the Tajik border were abducted. When they resurfaced around 24 hours later, they told authorities they had been taken across the border and beaten up by a group of people they believed to be Tajik security personnel.

The Kyrgyz Foreign Ministry later sent a note of protest to Dushanbe demanding an explanation for the occurrence.

Around the same period, sources in Vorukh and Isfara claimed that two young boys from Vorukh had been detained while grazing their livestock and assaulted by Kyrgyz border personnel. Kyrgyz officials denied this had happened.

**This story has been updated and recast on April 29 to reflect developments.