Azerbaijan has stepped up its blockade of key Armenian roads and the two sides have repeatedly exchanged fire amid reported diplomatic progress. 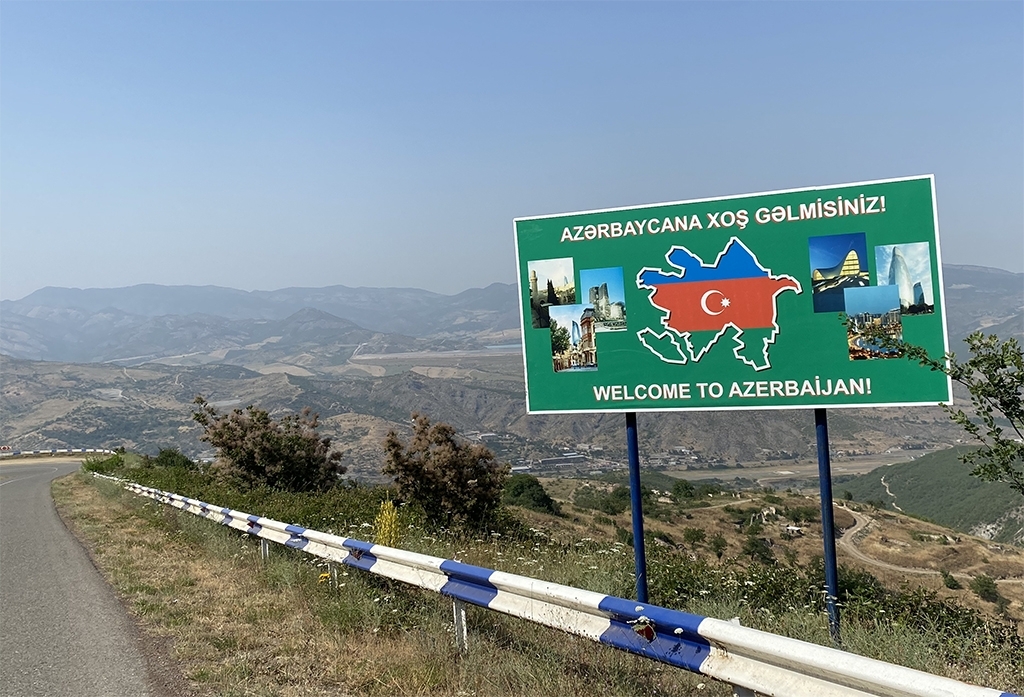 This is the first time that the movement of Armenians along the road appears to have been significantly restricted. (Joshua Kucera)

Tensions have again boiled over between Armenia and Azerbaijan, with multiple exchanges of fire in recent days and traffic restricted by Azerbaijani forces on two roads along the border with Armenia.

The incidents come as the two sides are reportedly close to reaching long-awaited agreements to demarcate their border and to open new transportation routes between the two countries.

Azerbaijan set up additional border checkpoints on the road connecting the southern Armenian cities of Goris and Kapan, Armenia’s human rights ombudsman announced on November 12. Then on November 15, Azerbaijanis set up another checkpoint on a road leading southeast from Goris, local officials reported.

The Armenian ombudsman, Arman Tatoyan, reported that many teachers and students who live between Goris and Kapan and commute to schools in those towns have been unable to make it to school as a result of the new checkpoints, forcing them to switch to online learning.

Azerbaijani checkpoints, targeting primarily Iranian trucks which had been supplying Karabakh, had already been operating on that road since August. Several segments of the road pass through Azerbaijani territory, over which Baku regained control as part of the ceasefire agreement ending last year’s war. It wasn’t immediately clear how the new checkpoints were operating but this is the first time that the movement of Armenians along the road appears to have been significantly restricted.

Traffic along the second section of the road, from Kapan leading to Chakaten and onward to the southernmost section of the Armenia-Azerbaijani border, had previously been unhindered. But in the middle of the night on November 15, Azerbaijani troops set up a new checkpoint in another segment that passes through a slice of Azerbaijani territory, at the village Gazanchi. Locals who live further along the road have not been told what the Azerbaijanis’ intentions there are, local officials said.

The mayor of Chakaten, Ara Harutyunyan, told local news website News.am that he had traveled to Kapan the morning of November 15 but wasn’t sure if he would be able to make it back. “It’s not even possible to get there, even by foot,” without that road, he said. “I don’t even know how I’m going to get back to the village. There are schoolchildren in the village, how are they going to get to school?”

Neither of the road restrictions was reported officially by Azerbaijani sources, though some Azerbaijani media carried the news, citing Armenian sources.

On November 13, a resident of Nagorno-Karabakh threw an “explosive device” at an Azerbaijani checkpoint near the city of Shusha, on the Lachin corridor that connects Karabakh to Armenia. That followed the killing of an Armenian civilian in the same area by Azerbaijani forces on November 8.

The road was closed for some time after the incident but reopened the same day. The man who threw the explosive was detained by Russian peacekeepers and was expected to be handed over to the de facto Karabakh authorities, official Karabakh sources reported.

Azerbaijani media released a video on November 14 that appeared to show a group of Azerbaijani soldiers surrounding and capturing an Armenian military post, though it was not clear on what part of the border, or on which side, the episode took place.

Earlier that day, Azerbaijan’s Defense Ministry reported that Armenians had been massing forces along the border near the Lachin district, and that Azerbaijani forces had taken “immediate measures to stop the provocation.” The next day, the ministry reported that Armenian forces had fired from the Gegharkunik region of Armenia into the Kelbajar region of Azerbaijan, damaging some road construction equipment.

Both statements ended with similar warnings: “Responsibility for the consequences of any confrontation on the Armenia-Azerbaijan border lie with the military-political leadership of Armenia.” Azerbaijani analyst Ahmad Alili noted the newly threatening tone: “This is a phrase from the pre-2020 war times,” he wrote on Twitter.

The European Union’s special representative for the South Caucasus expressed concern over the many incidents.

All of this took place as the two sides were reportedly negotiating over two new agreements, one on formally demarcating the border and another on opening a new transportation route (or routes) between the two countries, including from Azerbaijan through southern Armenia to the Azerbaijani exclave of Nakhchivan.

Ahead of the blocking of the Goris-Kapan road, Armenian Prime Minister Nikol Pashinyan warned that it might be coming. At a November 11 cabinet meeting, he said that Azerbaijan was using its effective control over the road as a bargaining chip to demand that Armenia give it a “corridor” through southern Armenia, that is a road or railroad over which Azerbaijan would have some sort of sovereignty. Pashinyan criticized Baku for trying to impose what he called “corridor logic” on Yerevan.

“Yesterday we received an unofficial warning that starting on November 11, they would start conducting customs and passport control of Armenian citizens on the ‘Eyvazli’ section of the road,” Pashinyan said. “After receiving the warning we are directing our citizens to take the Kapan-Avgani-Tatev road,” he said, referring to an alternative road that Armenians have been constructing that does not pass through Azerbaijani territory. “It would have been possible to negotiate that there was no control over that [Eyvazli] section, but the price for that would have been corridor logic [transit on the routes to Nakhchivan], which was unacceptable for us.”

He added that Armenia was ready to open up regional transportation communications “outside the context of extraterritoriality […] that is, we have never discussed and we will never discuss corridor logic.”

The two sides, along with Russia, have been discussing the transportation question via a series of meetings of the deputy prime ministers of the three countries. While few details have emerged, the crux of the dispute appears to be the level of control that the various parties will have over the road.

Azerbaijan President Ilham Aliyev and other officials use the phrase “Zangezur Corridor” to describe the new transport routes, implying that it will enjoy sovereignty over the territory. But government-connected analysts have been suggesting that Azerbaijan is angling for something less, such as a road and/or railroad that Azerbaijanis can use without customs controls from the Armenian side.

“What Azerbaijan wants is no checkpoints, not to have to stop at the border,” Anar Valiyev, an Azerbaijani analyst and the dean of the Azerbaijan Diplomatic Academy, told regional analyst Thomas de Waal in October. “We are in a situation where we have leverage, we have time and we can dictate terms.”

The Russian participant in the negotiations, Deputy Prime Minister Alexei Overchuk, also has said that Moscow does not envisage any kind of extraterritorial agreement. “We are coming to concrete solutions, based above all on the idea that sovereignty over the roads will be maintained by the countries through whose territory these roads will pass,” he said during a November 5 visit to Yerevan.

A well-connected Armenian news website, Aliq Media, reported at the end of October that the two sides had tentatively reached agreements on transportation and border demarcation and that the two countries’ leaders would sign them on November 9, the one-year anniversary of the ceasefire that ended last year’s fighting.

That sparked a wave of speculation in Armenia about the potential for new concessions, and Aliq later reported that Pashinyan pulled out of that agreement. Azerbaijani sources told Eurasianet, on condition of anonymity, that they believed that Baku was using the escalation of tensions to push Yerevan back to the table.

The foreign ministers of Armenia and Azerbaijan, along with the American, French, and Russian representatives of the OSCE Minsk Group, the body that has been mediating discussions on the conflict since the 1990s, met in Paris on November 11. It is not yet known when the two sides will next have a high-level meeting.