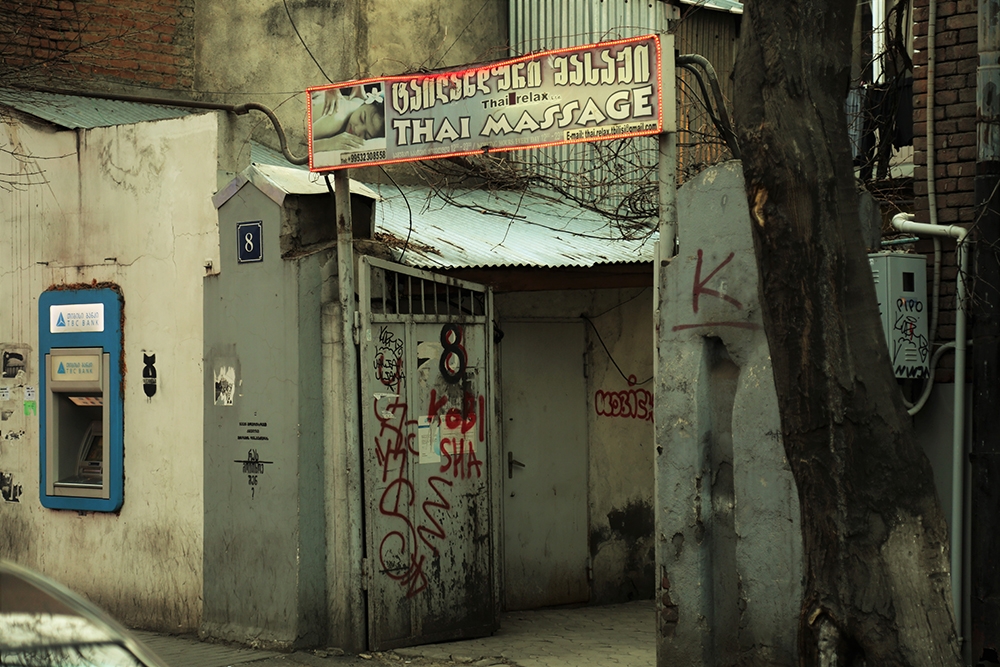 A wave of Thai massage artists have moved to Tbilisi in recent years. (Photos by Giorgi Lomsadze)

The first thing visitors see when they walk into Royal Thai Massage in Tbilisi is a sign specifying “No sex,” written both in English and Georgian. An accompanying pictogram makes the rule abundantly clear even for speakers of neither language.

Massage artists Jenna and Unny sit opposite one another, yawning and flipping through Instagram photos on their phones. Silhouetted against the window of their street-level shop, the two women in their early 20s strike a cinematic tableau. Jenna sits at the counter, dressed for the street with her black hair slicked back in a bun. Unny, with lighter, straight hair, is cocooned in a blanket on a sofa, with her shoes off and her feet tucked under. The counter is cluttered with Asian-style relaxation paraphernalia: incense, candles and the requisite miniature Buddha. A large, colorful poster provides a bilingual pricelist: an hour of regular Thai massage costs 50 lari (about $19); you can get the “Thai Royal” and “Hot Oil” massages for 60 and 80 lari, respectively.

“Business is bad now, all the ladies say business is bad,” says Jenna. “Maybe one client comes today, then no clients tomorrow, then three clients another day,” she says, blaming the slump on winter, a slow season for tourism. Iranians and Arabs, who increasingly choose to spend their holidays in the South Caucasus, make up much of their customer base, but “Georgians come too,” Jenna adds.

Jenna arrived in Tbilisi two weeks ago on a tip from fellow masseuses, “the ladies” as she calls them, who said Georgia is a promising new destination for the massage business. Unny came from Dubai a month ago, and says she’ll take Tbilisi over Dubai or her native Bangkok any day. “The air is so clean here and … no traffic,” she said, a characterization many locals would contest.

The pair are part of a wave of Thai massage artists who have moved to Tbilisi in recent years. Perovskaya, a small historic street, has the highest concentration of Thai massage businesses in the country and likely the entire region. Just steps away from Unny and Jenna’s shop, among Perovskaya’s tourist-friendly bars and restaurants, sit Thai Relax, Thara Thai Massage, and Enjoy Thai Massage. In total, 12 massage parlors are concentrated in the small area.

In the Georgian government’s business registry there are more than 80 massage establishments across the country that are either owned by Thai nationals or include “Thai” in the name; dozens more Georgian-owned massage shops in the database with generic names like “Lotus” or “Lucky Massage” appear to be of the same genre.

Ask Perovskaya natives to explain the proliferation of the parlors and they will give you a now-that’s-a-stupid-question look. Many are convinced that all these outlets – they refer to them as “the Chinese places” – are fronts for prostitution. While there is some fire for that smoke, the reality appears more complicated.

Georgia does boast some bona fide salons for Thai massage. Health Massage Center, tucked in another touristy corner of Tbilisi, gets rave reviews from men and women alike. Employees of several international organizations and schools frequent the center and describe it as professional.

There are, however, plenty of second-hand accounts and circumstantial evidence suggesting that many Thai masseuses in the city in fact stretch the concept of massage. Last summer, police arrested several Chinese and Thai citizens in Georgia’s seaside tourist hub of Batumi on charges of using their massage parlors for trading sex. In the end, a local court ordered twelve parlor owners to pay fines of 1,000 lari (about $380).

Several Tbilisi-based American and European citizens surveyed by Eurasianet, aficionados of Asian-style physical and mental relaxation techniques, refuse to set foot again in any of the Perovskaya parlors after being offered more than they asked for during initial visits.

For other patrons, though, more is exactly what they are looking for. One Friday night in the course of researching this story this reporter encountered a group of young Georgian men who were zigzagging between the Perovskaya massage parlors in a quest to figure out which ones “do it” and which don’t.

Other salons also have “no sex” signs, but many locals dismiss those warnings as thinly veiled advertisements that mean the opposite of what they say.

Jenna and Unny, for their part, insist that their sign is to be taken at face value. Both are eager to explain the differences between various types of massage. Jenna produces a masseur’s certificate she got from a school in Chiang Mai, Thailand’s northern hub. “We all go to school to study massage,” she said. “Not everybody can do it, you have to be strong.”

Another masseuse – who goes by the name Nadia after a stint in Moscow and who does shifts at several Tbilisi Thai massage parlors – equivocates when asked if her occupation has another side. She responds with a wink and says, “Thai women know how to make men happy.”

For all the dubious reputation of much of the Asian massage business, neither police, nor local human rights groups have taken a specific, consistent interest in them. Police data indicates a year-to-year increase in cases of foreign nationals engaged in or forced into prostitution. The U.S. State Department says that Georgia is a “source, transit, and destination country” for sex trafficking.

An exploration of the Perovskaya parlors revealed no evidence of forced labor. What it showed was a microcosm of a world that runs the spectrum from dingy, single-bed cubbyholes to spacious, cleaner facilities. At least two parlors were Thai in name only as they were staffed with citizens of Central Asia, a fact easily betrayed by their Russian accents.

Unny and Jenny’s shop is somewhere in the middle. They pay a monthly rent of $1,000 for space the size of a large studio apartment and they are happy with the location: “Everyone comes here, foreigners, Georgians.”

Regardless of any differences in their business models, many of Perovskaya’s Thai occupants hang out together during their spare time. Their gatherings are loud, gregarious affairs, where they cook and chatter away. “They say they will open a restaurant here, everyone [will] come because Thai food is the best in the world,” says Nadia as she translates at one of these gatherings. As for herself, she wants to open a beauty salon.

Jenna says she hopes to stay long enough to save up some cash before she moves on. “Ladies stay one year or two years” before they go back, she says.