A mood of goodwill is being soured by a running battle of words between Kyrgyzstan and Tajikistan, which also have long-standing border disagreements. 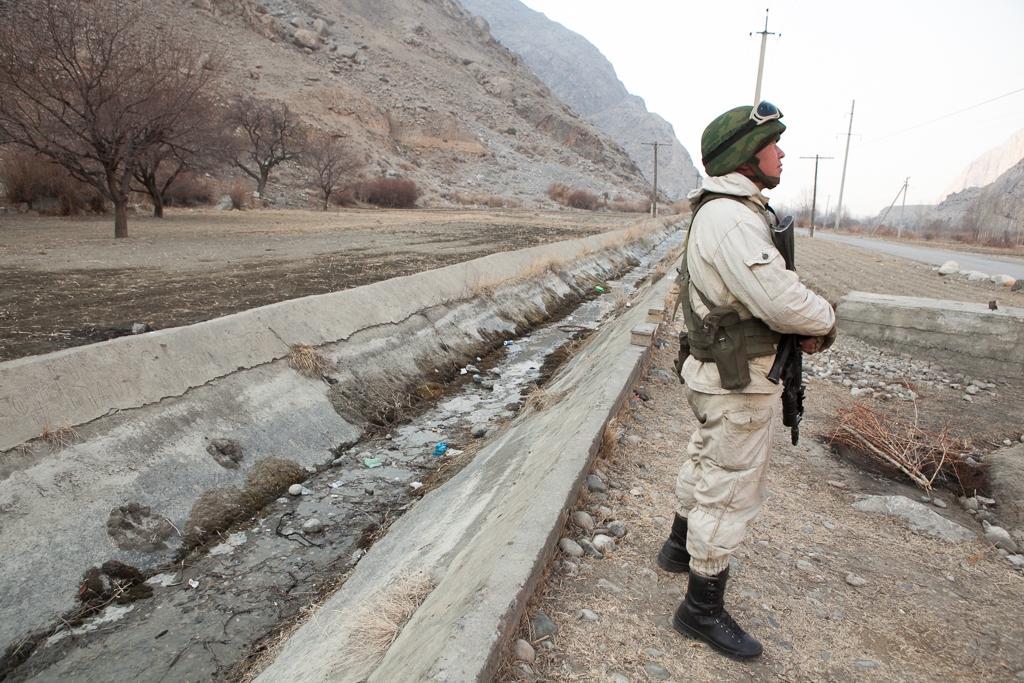 The intractable one: A Kyrgyz soldier on the border with Vorukh. (David Trilling)

A bout of neighborly bonhomie has broken out across Central Asia. It has not all been plain sailing, though.

Few developments will prove to have been as consequential as the one kickstarted by Kyrgyz President Sadyr Japarov’s visit to Uzbekistan on March 11-12. Talk of once and for all clearing up territorial differences were top of the agenda during his encounter with his Uzbek counterpart, Shavkat Mirziyoyev.

The leaders signaled, however, that it might be a few months before a deal was definitively thrashed out to delimit the roughly 350 kilometers of disputed sections of the 1,400-kilometer frontier. So it was particularly surprising when an agreement was reached within weeks instead.

The centerpiece of that breakthrough was a commitment to create multiple checkpoints for admitting cars and minibuses traveling to and from the mainland of Uzbekistan to its exclave of Sokh.

Kyrgyzstan got substantial swathes of land, while Uzbekistan was granted some certainty about its access to precious upstream water resources.

As veteran Moscow-based, Central Asia watcher Arkady Dubnov remarked, it was particularly notable that this was achieved without involvement from external intermediaries, like Russia and Kazakhstan.

Oddly, though, media in Uzbekistan almost entirely ignored the border agreement. And there has been the odd whisper about whether the Kyrgyz officials who trumpeted the resolution of the Sokh issue may have spoken prematurely.

It looks very much as though Japarov, who has a cratered economy to deal with, is in a hurry to get border troubles off the agenda. And few partners have been as tricky for Kyrgyzstan as Kazakhstan.

Every few months, large lines of trucks form as Kazakh customs officials grind the passage of freight traffic down to a near-standstill. The policy contravenes the spirit of the Moscow-led Eurasian Economic Union, or EAEU, trading bloc of which both countries are members. In substance, Nur-Sultan continues to be peeved by Bishkek’s tolerance – connivance even, some would argue – of smuggling operations that have an impact on EAEU across the board.

It came as pleasant news then that the Ak Zhol checkpoint, the busiest land crossing between the two countries in normal times, was reopened earlier this month after yearlong renovation works.

Officials say that where the crossing could once process no more than 10,000 people daily, capacity has now been increased to 35,000 people and 5,000 vehicles.

“The opening of the checkpoint is a step toward solving the strategic objective of increasing the volume of exports and imports, and strengthening the transit potential of both countries,” Kyrgyz Prime Minister Ulugbek Maripov said at the inauguration ceremony.

It could not come a moment too soon.

As RFE/RL’s Kyrgyz service, Radio Azattyk, has noted, 2020 was dismal for bilateral trade, which sunk by 20.3 percent to $794 million. The starting figure in itself was paltry.

In other encouraging and related news, Japarov announced on April 2 that Kazakhstan had agreed to grant Kyrgyz nationals permission to transit the country on their way to Russia. This is an important lifeline for the many people whose families rely on remittances.

“We are trying to increase the number of flights, reduce the size of fares and restart train links. But this decision depends on Russia and Kazakhstan,” Japarov said in a statement. “I know how important this is for our citizens who work in Russia and who cannot find a way to get abroad. The government of Kazakhstan today agreed to resume transit. Now we are waiting for a response from Russia.”

Russia lifted its restrictions on Kyrgyz citizens entering the country back in September, but the problem of physically getting there remained nonetheless given the paucity of transportation options.

This mood of goodwill is being soured somewhat, however, by a running battle of words between Kyrgyzstan and Tajikistan, which also have long-standing border disagreements.

The stink has by and large been caused by the head of the Kyrgyz security services, Kamchybek Tashiyev – the same man who claimed a triumph over the Uzbek border breakthrough.

In late March, Tashiyev told reporters that he had proposed a land swap, not dissimilar to what had been done with Uzbekistan, but the nature of the exchange was a patent non-starter.

Tajikistan should yield Vorukh, a fertile exclave surrounded by some of the most barren land in Kyrgyzstan, he suggested, and get a parcel of land from the Batken region in return. Disputes in this area, typically centering on access to irrigation water, have flared up with chronometric regularity.

Another idea proposed by Tashiyev was that the Tajiks delimit Vorukh and offer certainties of no future territorial spread of the exclave. People in the exclave would be given unfettered access to a road leading to the Tajik mainland in return, he said.

The ideas have been received coolly.

The Tajik government maintained a stony silence. But former Foreign Minister Hamrokhon Zarifi appeared to ventriloquize Dushanbe’s attitude when he wrote in a testy March 30 Facebook post that Tajikistan would never agree to give up land to Kyrgyzstan. He backed up his cases with references to how the territory was administered in Soviet times. In fact, Zarifi argued, it was Kyrgyzstan’s Batken region that used to be run by the Tajiks.

“There is no need to offer Tajiks their own land in return for other Tajik land,” he wrote.

Days later, in what may or may not have been a related development, Kyrgyzstan held military exercises in its Batken region. Fully 2,000 soldiers, 100 tanks and armored personnel carriers and around 20 units of self-propelled artillery were involved in the drill.

The Tajiks did not take that lying down. On April 9, Tajik President Emomali Rahmon paid a visit to Vorukh to offer direct assurances to residents that talk of surrendering the enclave was off the table.

“I urge you to live with your neighbors in a friendly and good-neighborly manner, remain calm and do not yield to emotions, because all problems must be resolved wholly through negotiations,” Rahmon said in a speech that same in day in the nearby town of Isfara.

For good measure, though, Rahmon inaugurated new local premises for the security services’ Alfa special forces unit in Vorukh, just in case the call to friendliness was not heard in Kyrgyzstan.