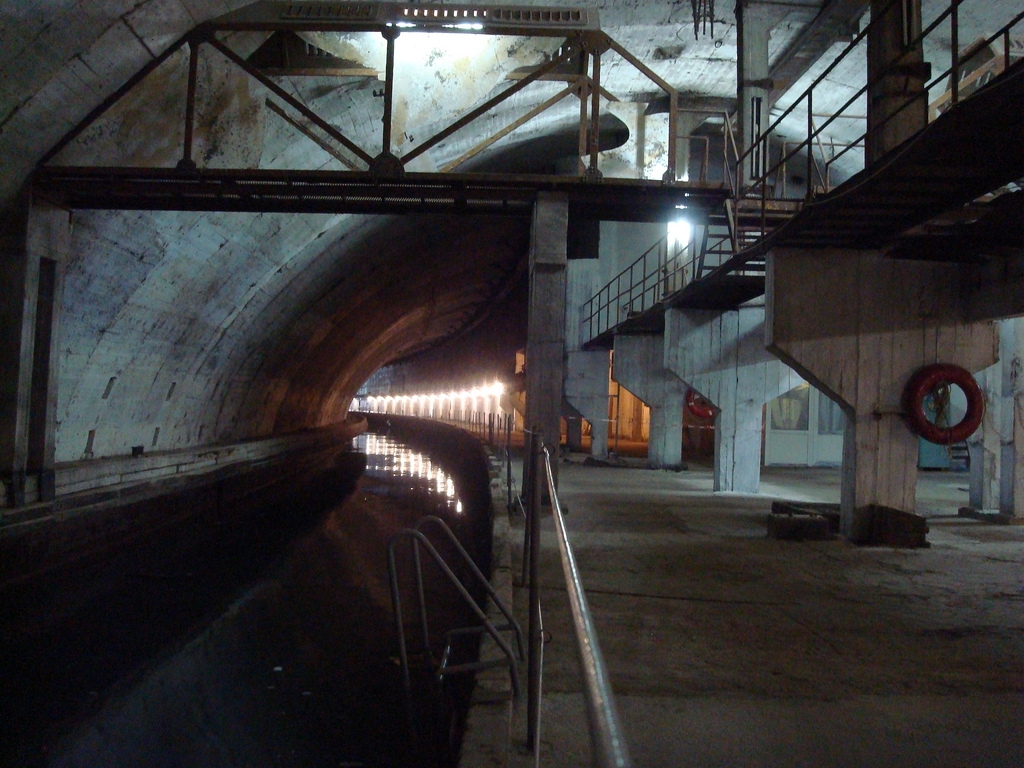 A former Soviet submarine base at Balaclava in Crimea. (photo: The Bug Pit)

Russia's Black Sea Fleet base in Sevastopol has long been Moscow's top strategic priority in Crimea. So did the base play a role in Russia's decision to intervene in Crimea?

In 2010, just a couple of months after taking office, then-President of Ukraine Viktor Yanukovych extended Russia's lease of the Sevastopol base until 2042. And in December 2013, when Russia agreed to a big economic aid package for Ukraine following Yanukovych's decision to drop negotiations with the European Union, Yanukovych appeared poised to accept a long-time Russian demand, that Ukraine drop restrictions on Russia expanding the size and power of the fleet. Russian military expert Dmitry Gorenburg told The Bug Pit at the time that the move was "potentially very significant" and that an agreement "would probably create an environment where subsequent presidents wouldn't be able to prevent replacement."

Yanukovych's acquiescence stood in contrast to that of his pro-Western predecessor, Viktor Yushchenko, who had been reluctant to extend the base agreement (which had been valid until 2017), So Russian President Vladimir Putin no doubt was concerned that the new pro-Western authorities who ousted Yanukovych would be less accommodating to the base.

“It’s hard to speculate on motivations, but it may be that one of the main reasons for the (events) in Crimea was, legitimately or not, they thought they might lose the base in Sevastopol,” Gorenburg told the American newspaper Stars and Stripes. "Putin had every reason to think that would happen," Fyodor Lukyanov, editor of the Moscow-based Russia in Global Affairs journal, told Reuters. "The new government in Ukraine wants to move closer to the European Union and NATO. Their agenda would have meant the fleet would have to leave."

And in a March 4 piece in the New York TImes, military analyst and Kremlin insider Ruslan Pukhov wrote that Russia's moves were likely an attempt to force Kiev to accept its conditions for the base:

A referendum on March 30 is likely to result in a vote for further autonomy, and it would provide Crimea with such broad freedoms that it would become a de facto Russian protectorate. Moscow would then aim to keep the Russian Black Sea fleet in Crimea indefinitely, and remove any limits on its operations, size and replenishment.

At present, Mr. Putin is seeking to strong-arm the new, weak and unstable government in Kiev into agreeing to full autonomy for Crimea rather than risk a full scale invasion into Ukraine and a partition that chops off the country’s entire south and east. The intimidated government is likely to be compelled to accept this compromise.

But Pukhov also argued that "Mr. Putin’s aim is not a de jure separation of Crimea from the rest of Ukraine. That would be legally problematic and disadvantageous to Moscow." And just two days later, the Crimean parliament voted to join Russia and Russia started making moves to accept Crimea. That's not to say Pukhov was wrong: there is a high degree of improvisation apparent in the Kremlin strategy here, so he may have been right -- at the time.

Whatever the importance of the Black Sea Fleet, however, it seems that this extreme move -- the looming annexation of Crimea -- can not be explained only by cold strategic considerations. The Kremlin also, it seems clear, is trying to take revenge for two decades of Russian humiliation at the hands of the West, which has been a conspicuous focus of Putin's second run as president.

We don't know what the new authorities in Kiev would have done with respect to the base. But since Russia's intervention, they have started, understandably, calling for its removal. “Today it is obvious that basically the Black Sea fleet has become the source of a war ... a ground for seizing our state,” she told the AP, adding that Ukraine must not make any compromises to appease Russia. “We believe that the aggressor must leave without any conditions." And protest leader Vitaly Klitschko said that "parliament should ... consider scrapping the agreement on the Black Sea Fleet lease.” What's not clear is if the authorities in Kiev are going to have any say in what happens in Crimea.