The breakaway league comes to Nagorno-Karabakh

Soccer teams from separatist, autonomous, and otherwise self-identified territories are fighting for “national” pride in Nagorno-Karabakh. 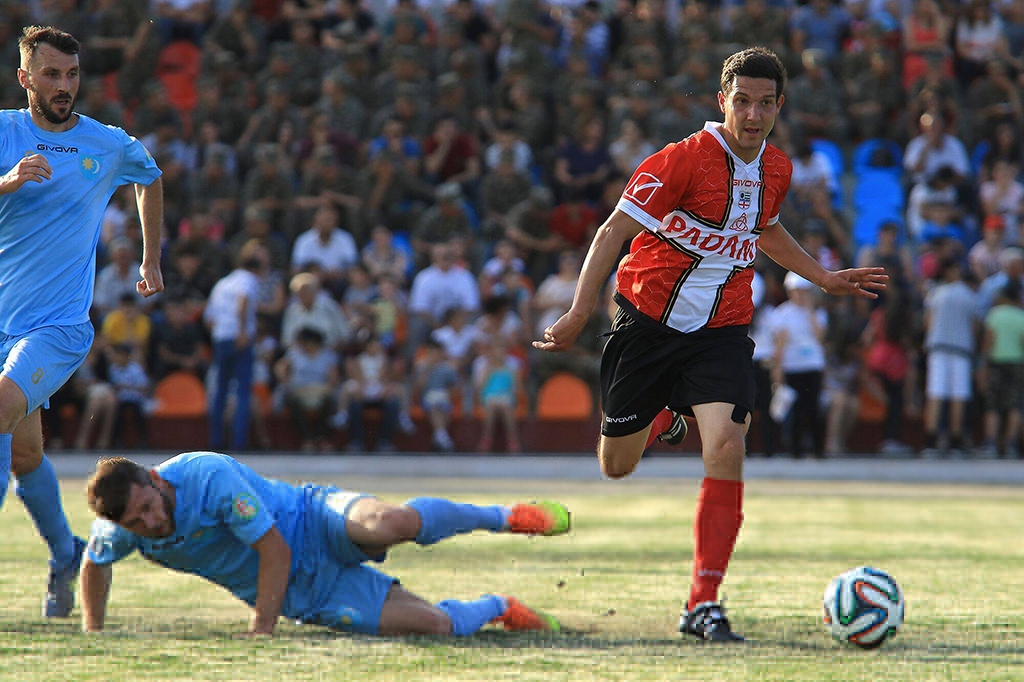 During the Padania vs Székely Land match (all photos: CONIFA Facebook page)

The breakaway territories of Europe and some of their fellow travelers are gathered in the continent’s far-off, contested outskirt of Nagorno-Karabakh for their version of an international soccer competition.

From Lapland to Abkhazia, the line-up of teams serves as a guide to the obscure, often legally ambiguous enclaves of Europe and its periphery. The tournament is a chance for “sportingly isolated regions” to share in the “joy of playing international football,” in the words of the organizer, the Confederation of Independent Football Associations (CONIFA), an unrecognized nations’ FIFA of sorts.

The tournament kicked off on June 1 in Nagorno-Karabakh’s de facto capital of Stepanakert with a grand opening featuring a light show, musical performances – including by perhaps Armenia’s most famous pop star, Sirusho – and theatricalized portrayals of the Armenian culture of Karabakh. “Today the capital of Europe is Stepanakert,” CONIFA President Per-Anders Blind said at the opening ceremony, Armenpress reported.

The spectacle featured a parade of flags and teams from territories that are – at best – marked with dotted lines on the world map, including Chameria, Sapmi, and Székely Land. But four teams dropped out at the last minute, including the twin Peoples’ Republics of Donetsk and Luhansk. These two Russian-backed separatist regions of Ukraine could not afford the travel and logistical expenses, CONIFA officials told Eurasianet.

From a theme song to betting charts, the games bear all the trappings of more conventional international football championships. “Run, run, run, be the champion of fire […] we are CONIFA, all together we will make this place rock,” local band Voices of Artsakh sang in a rollicking anthem, the video to which shows off Karabakh’s cultural highlights.

The competition is a triumph for Nagorno-Karabakh – which is internationally recognized as part of Azerbaijan but has been controlled by ethnic Armenian forces since a ceasefire in 1994 – giving the self-declared republic a chance to boost its stature and bolster its claim to sovereignty. “This is the first time that this kind of an international sports event is taking place here,” said Bako Sahakyan, the de facto leader of the region.

Azerbaijan scoffed at the event, calling it a parody of football. “The participation of the countries like Lapland in these games reminds me of fairy tales about snow-covered countries,” the spokesperson for Azerbaijan’s Foreign Ministry, Leyla Abdullayeva, said in a statement. “The Armenian psychology is indeed based on fairy tales and legends that they believe.”

This is the second soccer spat between Armenians and Azerbaijanis in less than a month: In the May 29 Europa League championship in Baku, an Arsenal midfielder from Armenia declined to participate, setting off a bitter debate between the two sides.

Karabakh may be the biggest and the oldest flashpoint in the South Caucasus, but it is not the only one represented in the CONIFA tournament. At the opening, Sahakyan welcomed Anatoly Bibilov, his similarly de-facto opposite number from, in his words, “brotherly” South Ossetia, a tiny Russia-backed self-proclaimed republic which most of the world recognizes as part of Georgia.

Along with Azerbaijan, Georgia also condemned the event, pointing out that CONIFA itself is as unrecognized as the regions it brought together. “FIFA and UEFA categorically distance themselves from CONIFA and organizations of that sort,” Georgian Foreign Ministry Spokesperson Vladimir Konstantinidi told journalists. “Therefore, participation of football teams from Abkhazia and the Tskhinvali region [South Ossetia] cannot become a basis of some form of legitimization of the occupying regimes.” Tbilisi regards the two regions as Georgian territories under Russian occupation.

Azerbaijan reportedly did try to prevent the championship from coming to Nagorno-Karabakh; it regards the government there as an illegal occupation and strives to isolate it internationally. “The Azerbaijan government, through its embassy in Berlin, contacted me (I’m a German and live in Germany) and very kindly informed us about their point of view of the Nagorno-Karabakh conflict […] and requested us to cancel the event,” CONIFA General Secretary Sascha Düerkop told Eurasianet in an email. The Azerbaijani MFA did not respond to requests for comment from Eurasianet.

Düerkop said that a team from the French county of Nice dropped out as a result of Azerbaijani pressure. (Representatives of the Nice team did not respond to a request to corroborate.) “We are, indeed, sad to see that Azerbaijan is fiercely against the tournament,” said Düerkop. He said that last year, a team from Azerbaijan’s exclave of Nakhchivan expressed interest in taking part in CONIFA: “They […] withdrew their membership quickly when official Baku contacted them.” (A team from Turkish-backed Northern Cyprus, which had taken part in previous CONIFA events, was an early dropout; Turkey toes Azerbaijan’s line internationally with respect to Nagorno-Karabakh.)

It is the second time CONIFA’s championship has graced the contested zones of the South Caucasus. In 2016, CONIFA held a larger, World Cup-style championship in Abkhazia – like South Ossetia a Russia-backed de facto republic that most of the world considers Georgian. The team from Abkhazia prevailed in that tournament and as of June 5 was the top team in this year’s affair. In the June 6 semi-finals, Abkhazia will take on Western Armenia, and the hosts will meet Székely Land.

CONIFA, though, insists that everyone is a winner in its border-transcending contest. “We believe that all people should enjoy the beautiful game,” Düerkop said.