The dirty fuel isn’t cheaper, but often the only choice. 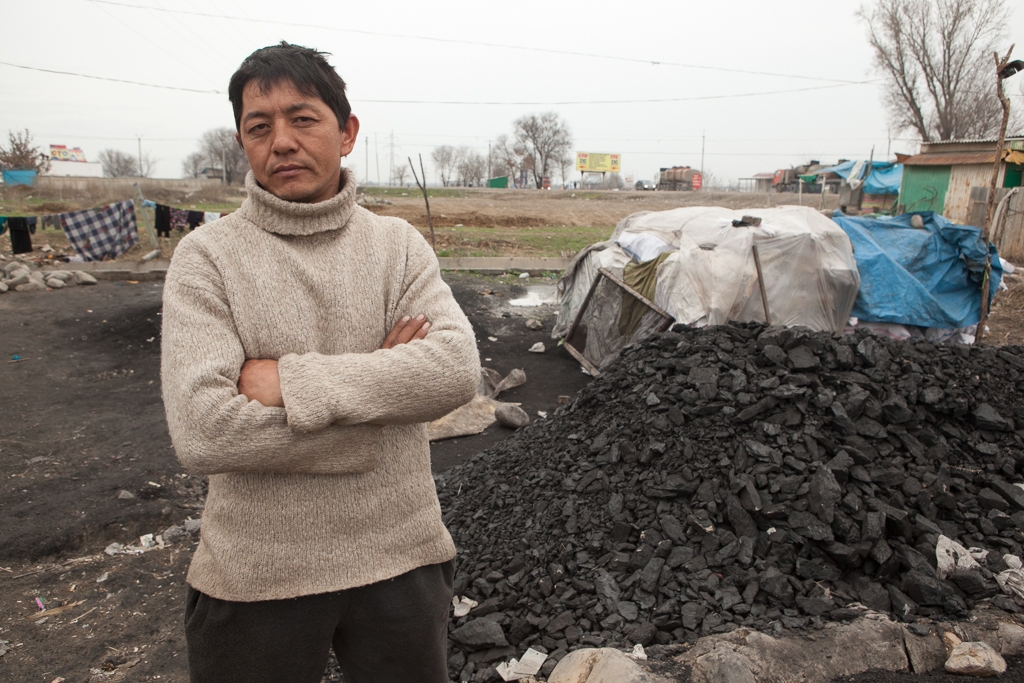 A man selling coal on the outskirts of Bishkek (David Trilling)

The filthy air in Almaty and Bishkek has been well-documented and, in recent years, the subject of rising concern among residents. Less scrutinized is the smog in Central Asia’s smaller towns and villages, and the health risks posed by indoor air pollution.

The reason is often coal. The dirty fuel is abundant in Central Asia and often the only source for heating and cooking. Even in Kazakhstan, with its vast reserves of natural gas, many houses are not connected to a gas main; nationwide, 75 percent of households burn solid fuels (generally coal) at least sometimes to keep warm.

Why people in Kazakhstan and Kyrgyzstan choose coal is the subject of a data-rich working paper published last month by the Asian Development Bank Institute. As the two countries have gotten wealthier over the last generation, household energy consumption has jumped rapidly – between 2000 and 2017 it tripled in Kazakhstan and grew ninefold in Kyrgyzstan. Yet the governments are doing little to incentivize switching to cleaner fuels or to improve efficiency standards for new buildings, the authors find.

Anything as complicated as human decision-making includes many moving parts. The authors start their inquiry by looking to demographic factors like education and income. Those correlate with slightly higher preferences for alternative energy sources, but also urban living, where people are more likely to have access to gas and central heating. Yet even in Kyrgyzstan’s urban areas, only 19 percent have central heating (in rural areas the figure is 1 percent). For thousands of Bishkek homes, the only option is coal.

And coal is not necessarily cheaper. In both countries, households that buy coal actually spend more than those using piped gas or central heating, “because coal has additional transaction and transportation costs and coal prices are less regulated, while prices of gas and central heating remain regulated,” the paper says.

Households do not use only one type of energy. The authors – who analyzed several recent national surveys – found that many people who cook with electricity cannot rely on it for heat: In Kyrgyzstan, 70 percent do not use electricity to keep warm because the price is too high; 15 percent said the voltage was too weak to power a heater; another 14 percent used coal because the upfront costs of installing a boiler or other equipment are prohibitive.

Kyrgyzstan produces the vast majority of its electricity with aging, Soviet-built hydropower dams that need expensive repairs and struggle to meet demand. An official warned on June 7 that the system is close to “collapse.” Yet any move to raise prices (as the IMF recommended most recently on June 8) to fund repairs will likely encourage people to use more coal, the authors say.

What about natural gas?

Russian gas giant Gazprom, which bought Kyrgyzstan’s gas distribution system in 2014, has long talked about expanding the network. Kazakhstan’s pipeline system, meanwhile, has grown markedly in recent years, from reaching about 30 percent of homes in 2013 to 52 percent in 2019.

Yet in both countries, even when gas is available, a switch to it requires expensive investments in infrastructure, a connection to the grid, a gas-fired boiler. “The wide use of efficient heating technologies at scale would require dedicated targeted financing mechanisms and a targeted incentive program from the government alongside awareness-raising campaigns,” the paper says.

The governments are not adopting more efficiency codes to target newer buildings, either. In Kazakhstan, “newer houses are not more energy efficient.” Instead, because they are generally larger, the data show they burn more coal.