The Fast and the Furious occupies Tbilisi

The Georgian capital has become a stage set for a Hollywood action flick; some joke that the name of the film franchise is just driving as usual in the city. 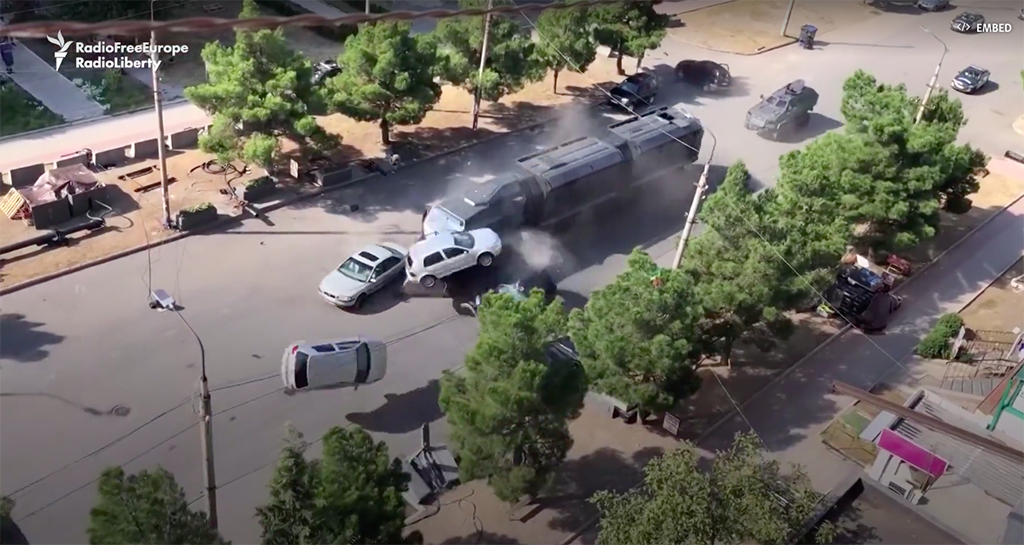 Screenshot from RFE/RL footage of filming of the latest installment of film franchise The Fast and the Furious in Tbilisi.

A truck plowed into a bus stop on Tbilisi’s main prospect just outside the handsome, cake-like Opera House, in a cacophony of explosions and gunshots. A massive, armored tractor-trailer followed, cars and a helicopter in hot pursuit.

No, it’s not another civil war or foreign invasion – it’s the filming of the latest installment of The Fast and The Furious, Hollywood’s car-racing blockbuster franchise, and it’s become the talk of Tbilisi.

Scenes of mayhem have played out in various parts of the city since mid-August. Police have been cordoning off one street after another, leaving many residents fretting over redirected traffic, with others excited for Hollywood’s arrival in Georgia. “Come, bring popcorn and coke, my balcony is a 4D movie theatre these days,” said one resident of Vazha-Pshavela Avenue, which for a week was the set for a chase sequence, complete with a stuntman fight atop a trailer truck.

The production team then migrated downtown, where vehicles continued smashing into one another with satisfying regularity. Tourists walking down central Rustaveli Avenue appeared variously confused or entertained to be caught in the middle of an action movie.

Still, the filming of the movie’s trademark dizzying driving stunts left many unimpressed in a city where indigenous drivers are far from averse to pushing the pedal to the metal. “Fast & Furious is filming in Tbilisi. Locals call it driving as usual,” went one online commentary. Some social-media memes portrayed the film’s star, Vin Diesel, left in the dust by a driver of a marshrutka, the omnipresent post-Soviet passenger van.

Either way, The Fast and the Furious 9 has been the talk of the town. The government took credit for the filming as a grand achievement in the country’s film industry. “We have turned the corner and a Hollywood film has come to Georgia for the first time,” said Mikheil Khadureli, director of Enterprise Georgia, a state agency for attracting investment, in a press release.

The agency said the film was the biggest get yet for a state program offering a 20 percent rebate to film productions that shoot in the country. “This project is unprecedented in the history of film in Georgia,” Enterprise Georgia said, adding that it will bring almost $10 million to Georgia and employ 425 Georgians.

This has not mollified many Tbilisians, irked by the heavy interruptions to the city’s already-troublesome traffic. Many residents grumbled that their city has been hijacked by Hollywood. “As if this city lacks crazy driving,” went one complaint on Facebook; “Will it ever end? I can’t even park by my own house,” another. Still, some shop-holders welcomed the generous compensations that the production was paying to businesses on the affected streets.

Production is soon moving to the nearby industrial town of Rustavi and will become, depending on one’s perspective, that city’s problem or its source of entertainment. Filming is scheduled to last for about two months and is expected to earn Georgia about 10 minutes of on-screen Hollywood glory.