The Kazakh centenarian who escaped the Soviets twice

Asiya Sardarbek fled the Red Army in Kazakhstan and then Afghanistan. 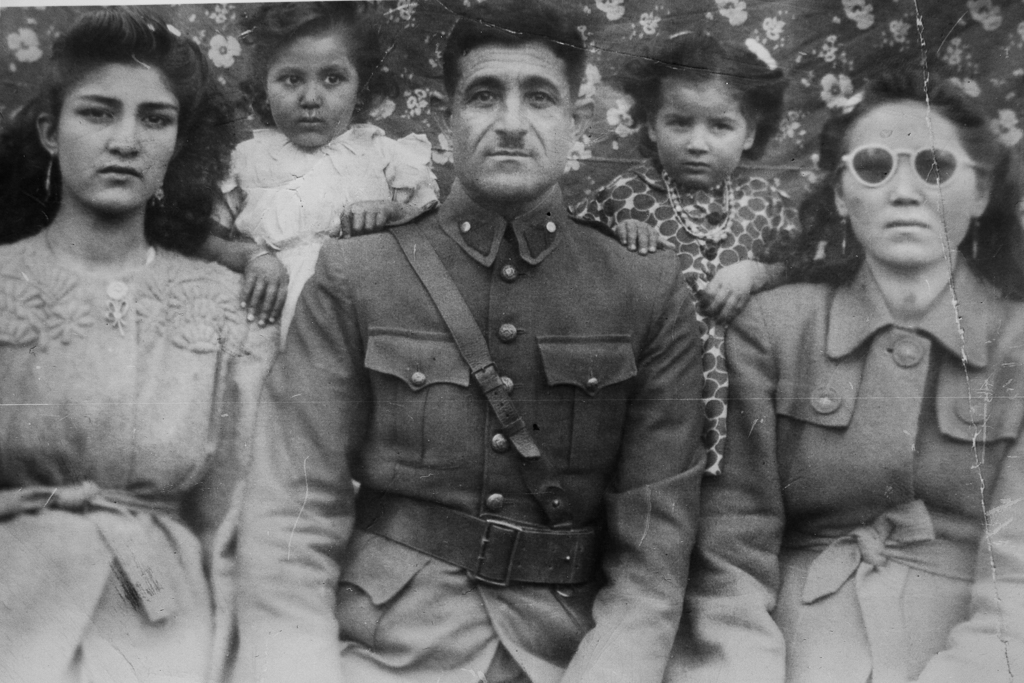 Surrounded by her children, Asiya Sardarbek welcomed Amir, her newly born great-great-grandson. A year ago, when she learned that her great-granddaughter was pregnant, she predicted the child would be a boy and that she would drink water from his palm, a tradition she believes will ease her path to heaven. The extended family gathered to do her will, but the baby was not going to make it easy – he cried and balled up his fists. A solution was found: An elderly relative held a tablespoon of water above Amir’s hand, he touched it, and Asiya finally sipped water from the spoon.

At 102, no longer able to walk, Asiya resides in an assisted living home in Reston, Virginia.

Dressed in a silk scarf and thick heather cardigan, she sits on a recliner. Her wrinkled face is covered with spots. She wears glasses and hearing aids, and has only two teeth, on her lower-left jaw.

But Asiya’s mind is agile and full of vivid memories that parallel, and intertwine with, the rise and fall of the Soviet Union.

Born in 1916, Asiya narrowly avoided capture – twice – by the communists. The first time was in Kazakhstan during the collectivization campaign in the 1920s, and the second in Afghanistan when the Soviet Union invaded in 1979. Her life stretches from czarist Russia into a generation after the independence of Kazakhstan, her motherland.

And she has her stories.

Asiya was born in Moinkum, an oasis on the banks of the Shu River in the south of Kazakhstan. Her father, Saldarbek, a rich and respected man, owned a good number of livestock and knew a lot about animals, she says.

In the fall of 1928, when his daughter was 12, Saldarbek came home from Friday prayers at the local mosque with a stamp on his forearm. It contained a word in Russian, a language then unknown to most Kazakhs. The stamp was placed by the Red Army soldiers who had stormed in during the prayers. “It is for the census,” one of the soldiers told the men.

But Saldarbek’s nephew worked for the Soviets and knew Russian. He recognized that the stamp had nothing to do with a census. It meant “to be executed.” He warned Saldarbek that he might be shot the next morning.

The family had only one night to gather all their belongings and escape.

The Kazakh lands were absorbed by the Russian Empire in the 17th and 18th centuries. After the Bolshevik Revolution in 1917, the Kazakhs became a nominally autonomous region under the Soviet Union. Their nomadic lifestyle of was a problem for the Communist Party, however. Nomads were difficult to control. There were few towns. The government did not know the exact number of people or animals, the primary source of wealth in the region, which made it hard to collect taxes and to establish a new communist order.

“There is no true Soviet authority in an aul,” said Filipp Goloshchyokin, the first party secretary of Kazakhstan, at a regional party conference in December 1925, referring to the nomadic tent villages where many Kazakhs lived. The Kazakhs, he went on, were ruled by “bai,” or rich herd owners, who according to Marxist-Leninist ideology were enemies of the working class.

So, on August 27, 1928, Goloshchyokin signed the decree “On confiscation and eviction of large bai households and semi-feudalists,” legalizing the appropriation of the Kazakhs’ livestock. Simple arithmetic was used to define who was rich: possession of more than 400 animals by one nomadic group, more than 300 in a semi-nomadic group and 150 by a settled group. The decree also stipulated that those who had fewer animals but were considered by local officials to be ideologically dangerous should have their animals expropriated as well. Asiya does not remember the exact number of livestock her family had at the time. But she does remember the Soviets taking all the animals her family kept in their barn.

“They shot some villagers immediately. Others they let go after they appropriated their property. They counted how many sheep and cows we had,” Asiya said in a thin, breathless voice. “We had some sheep in our house and the soldiers did not go into the house.”

The confiscation campaign led to one of the most horrible famines on the Kazakh steppe, in 1931-1933.

According to historian Sarah Cameron, prior to the famine, 6.5 million people lived on the current territory of Kazakhstan. More than a half of the total population, or 57 percent, were Kazakhs. Russian and Ukrainian settlers comprised 33 percent. During the famine, historians believe, nearly 40 percent of Kazakhs, possibly 1.3 million people, died. Around 90 percent of domesticated animals were lost. Eventually, Kazakhs became a minority in their traditional lands.

The confiscation of livestock would become known as the “Little October” revolution, honoring the October 1917 revolution in Russia.

“We pulled up the hardwood floor and buried all the belongings we could not carry. Carpets, cauldrons, bags of grain. Everything. Even dried meat,” she said of the evening her father was stamped. “The women wrapped their bodies with large woolen scarves, tucking in all the jewelry they had.”

It was an innovative way of carrying jewelry unnoticed, an idea Asiya’s mother Ultukash devised.

At dawn, the family headed south on a journey that lasted several years – across southern Kazakhstan and Uzbekistan.

“Occasionally, we met threatening bandits on the road,” Asiya recalled. “We would give them some of our jewelry and they would let us go.”

Exhausted, helpless and uncertain, the family approached the Amu Darya, the largest river in Central Asia. On the other side was Afghanistan, a country then free of the communists.

Asiya’s family reached Maymana, a city in Afghanistan’s north. Soon, news about the Kazakh strangers reached Mohamed Hossain, the governor of the Maymana region. Hossain lived in a large house surrounded by smaller houses. He granted one of the small houses to Saldarbek.

“Comfort yourself, you can slaughter a sheep if you want,” said Hossain to Saldarbek.

The governor's kindness surprised the family. “True Muslim,” they thought of him.

But his kindness came at a price. Hossain insisted that 14-year-old Asiya marry his 20-year-old son, Mohammed Aslam.

Saldarbek refused. “No,” he said. “I will not give my daughter. She is too young; how can I give her?”

“We are Muslims too. We will not hurt her. She will have her own herd,” Hossain said, trying to persuade Saldarbek.

Eventually, Hossain reminded him that he could have taken Asiya by force. Saldarbek had to consent, and Asiya married Aslam.

“My father could not accept my early marriage for a long time,” said Asiya. “But my new Afghan family was very kind to me. I did not cook. I did not clean the house,” she recalled, describing tasks that are usually assigned to brides in Central Asia.

“My parents-in-law were good people. They always took care of me. They deliberately hired Kazakhs, so that I was able to speak in my mother tongue.”

When a video story about Asiya appeared on a Kazakh television station in 2014, many people were surprised to hear how pure her Kazakh was. They could not believe that someone who spent 90 years abroad was able to speak the language so perfectly. This reaction reflects the current state of the Kazakh language in Kazakhstan. Even though Kazakhs comprise 70 percent of the country’s population, the language still does not compete in utility with Russian. Millions of Kazakhs themselves do not speak the language.

But Asiya speaks her native language only when she meets other Kazakhs. With her children and family, she speaks in Dari, a variation of Persian spoken in Afghanistan. Her daughters do not know Kazakh and blame their mother for not teaching them the language.

“When journalists from Kazakhstan visit us, she always speaks in Kazakh and I do not understand what they are talking about,” complained Amena Amiri, 71, Asiya’s second daughter. “A mother is supposed to teach her children her own language.”

When asked why she did not teach them Kazakh, Asiya explains that she was young, living in a new country, she wanted to learn her new family’s language.

“If they really wanted, they could have learned the language,” Asiya retorted in Kazakh, so Amena could not understand. “We had many Kazakhs to serve us.”

Asiya’s husband Aslam was a member of the Muhammadzai, a Pashtun clan that had ruled Afghanistan since 1826. Three years after they married, he took another wife – this time an Afghan, whom the family would call Robbiya. The two women got on well.

“We would sleep in one large bed. Aslam in the middle and we the wives on both sides,” said Asiya with a shy smile. “Islam dictates a man treat his wives equally and he did.”

“Every time my mom became pregnant, Robbiya was pregnant too,” said Amena laughing. She and her brothers and sisters have half-siblings the same ages.

On December 24, 1979, the Soviet 40th Army rolled into Afghanistan, crossing the same river Asiya had escaped over 51 years earlier.

Still fearing the Soviets after her experience decades before, Asiya and her daughters and grandchildren flew to Istanbul, where Asiya had a brother, Ismail. After spending a month in Istanbul, the family moved on to West Germany and settled in Frankfurt in early 1980. A few years later they were reunited in the United States, where they received refugee status. They settled in Reston, where Amena opened a bakery.

Today, Asiya lives near her children. In 2017, when a Kazakh journalist reported that “she lives in a nursing home,” many Kazakhs were shocked. The idea of an elderly Kazakh not being cared for by her children is anathema to Kazakh culture.

But it was Asiya’s decision to move into assisted living in 1989.

She likes the peace and quiet.

The home provides a caretaker who sits with her on weekdays. The other two days Asiya spends with Amena.

The caretaker is an immigrant from Afghanistan who speaks Dari and knows Afghan culture, including its cuisine. But Asiya does not like her cooking.

“Her food isn’t as tasty as my daughters’. The meals she gives me have no calories at all,” said Asiya, sipping a coke and eating a plate of fried chicken over rice prepared by her daughter.