The apology or recantation is uploaded to social media. Often, there is a pretense of the repentance being voluntary. But that is not always the case. 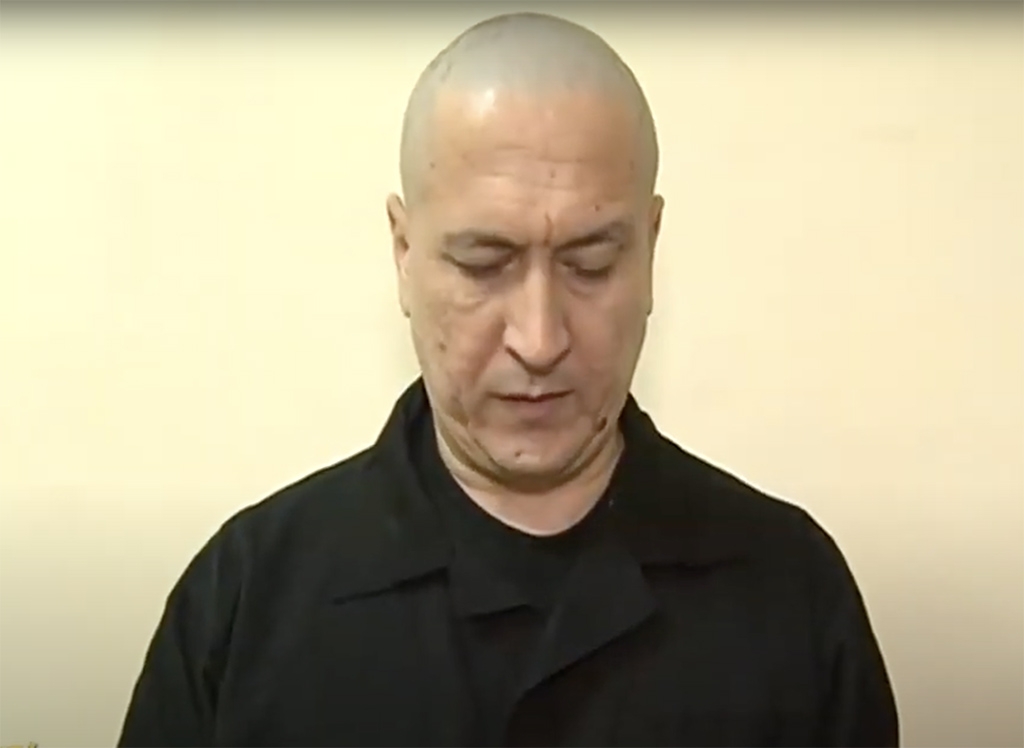 Former Turkmen Interior Minister Isgender Mulikov, who had been fired some weeks before, appeared on national television news in handcuffs, black prison garb and with his head shaven. He admitted to involvement in bribe-taking and embezzlement. (screenshot)

Class enemies would be forced to kneel before crowds, declaiming their guilt for some perceived transgression while an assembled crowd pelted them with abuse.

A practice with similar undertones – albeit with a high-tech twist – has become commonplace in parts of the former Soviet Union, and especially so in Central Asia.

The modern struggle session requires the offender to deliver an apology or recantation into a camera for footage that is then uploaded to social media or video-sharing platforms. Often, there is a pretense of the repentance being voluntary. But that is not always the case.

Barely a month seems to pass in Kazakhstan without somebody groveling for forgiveness on video.

In February, a group of celebrities, including singers, actors, and social media influencers, filmed appeals to the public apologizing for promoting the services of what turned out to be a pyramid scheme. In one typical video from this series, singer Aikyn Tolepbergen said he was deeply sorry if “somebody had really trusted what I said and went and invested their precious savings.”

Things got more serious in March, as Kazakhstan started to battle its coronavirus outbreak. One Almaty resident, identified by police only by the initial D., thought to make light of the situation by claiming that he had become infected and that he intended to commit suicide by shooting himself. A humble apology followed shortly after: “I ask you to forgive me ladies and gentlemen." The Polisia.kz YouTube channel, which collates Interior Ministry-produced videos, is a veritable treasure trove of such forced appeals.

Grimmer episodes occurred in the months that followed.

In May, the father of an off-duty police officer who fatally ran over two fellow policemen at a checkpoint into Almaty begged Kazakh citizens for forgiveness for his son. His voice breaking, Talgat Mukashev said that what his son had done was an accident.

Earlier this month, a man from Atyrau, Margulan Zhumatayev, delivered a video apology for trying and failing (he claims) to strangle a dog with by clamping its neck in a fridge door. The original incident was filmed by Zhumatayev’s acquaintance and was then shared online. “The dog got out [of the house] and tramped on the seedlings in the greenhouse that had been planted by my parents and tore up the plastic sheets,” Zhumatayev said. “I was drunk, so I began to abuse the animal.”

The coronavirus outbreak has been at the root of many video apologies in Kyrgyzstan too. It is not always evident that the apology is justified, however.

In early March, before there had been any confirmed cases, rumors flew around liberally on messaging apps. A pair of women in the Talas region were caught by police spreading a claim that people had been diagnosed with the virus and were then required to recant to camera, albeit with their faces blurred. By the end of the month, Talas region had announced its first cases.

In April, a doctor in the Ysyk-Ata district, east of the capital, Bishkek, posted a message online to say that medical workers were being given poor-quality PPE. Soon after, a video appeared featuring the same doctor. “I apologize for spreading this inaccurate information,” the young man says, as he puts a mask over his mouth, a gesture that was widely interpreted as a nod to the fact that he was being gagged by his superiors.

Lockdown and the isolation that it brought with it has strained many people’s patience and enfeebled their judgement. Such was the case of one young woman in the Jalal-Abad region, who took to social media on April 11 to call fellow Kyrgyz citizens a bunch of “stinkers” and vowed to leave the country when the crisis passed. The next day, she was having to grovel from the police station. “At the moment, I am in the police station and I will have to answer to the law,” she says. “I want to tell everybody that you should never insult the Kyrgyz people.”

Despite some cosmetic changes to the political system, Uzbekistan still has many red lines that the public – even celebrities – are advised against crossing. Famous singer Yulduz Usmanova learned that to her cost in May, when she self-recorded a video complaining about traffic police who, she said, had failed to help her deliver humanitarian aid to flood victims. “What? Do you need an enema before you will finally start doing your job?” she ranted, somewhat perplexingly.

A furor ensued. Police threatened to press charges for the insult. A few days later, a less emotional Usmanova, delivered another video message, this time expressing regret for her caustic outburst. The police “are good guys,” she said. “They work 24 hours a day. I was hot and flustered. I got angry.”

In June, it was the turn of members of the Sho’rdanak comedy troupe to eat crow. Erkin Choliyev and Doniyor Khasanov had performed a number of sketches depicting traffic police as being variously corrupt or dim. The authorities did not appreciate the joke, whining that the wisecracking might give the public, especially young people, the wrong idea.

On June 8, the Interior Ministry posted a seven-minute video that included, for good measure, one offending a sketch in its entirety and then a testimony from Choliyev admitting that his team’s error was that they “did not possess sufficient information about [traffic policemen].”

In Turkmenistan, straight-to-camera confessions still retain the harsh and humiliating flavor of their Maoist struggle session antecedents. In the time of the late President Saparmurat Niyazov, who died in 2006, it was common for alleged criminals and plotters to be paraded on TV to deliver grueling self-recriminations. The practice was largely abandoned by Niyazov’s successor, President Gurbanguly Berdymukhamedov, but it had something of a resurgence during a spate of arrests of major officials and businesspeople last year.

In early December, former Interior Minister Isgender Mulikov, who had been fired some weeks before, appeared on national television news in handcuffs, black prison garb and with his head shaven. In the footage, he admitted to involvement in bribe-taking and embezzlement. Many other senior figures were forced to do the same, often as they performed routines of contrite, uncontrollable sobbing.

Video repentance sessions are more explicitly political in Tajikistan. The practice of having former opposition supporters deliver recantations to camera began around 2013.

As recently as last week, the State Committee for National Security, or GKNB, published a series of testimonies from one-time members of the Islamic Renaissance Party of Tajikistan, expressing regret for their prior association with the party. The IRPT was banned in 2015 and countless people have since been jailed for alleged ties to it.

“I feel a civic and religious duty to the population to warn them not to get involved with this party,” says a man identified as Ayyomiddin Sattorov in one video. “You should know that they [the IRPT] have bad plans for Tajikistan.”

A related genre are the recantations produced under clear duress. In September, authorities in Poland deported Mustafo Hayotov, a member of the exile-run Group 24 opposition movement, to his native Tajikistan. Before being deported, Hayotov had gone on hunger strike, protesting that he could face torture at the hands of Tajik authorities.

After arriving in Dushanbe, however, Hayotov recorded a message to speak in glowing terms of how his country was flourishing and to say that foreign-based opposition groups were deceiving the people.