The country thought it had escaped the bad old days when neighborhood gangs ruled Tbilisi’s streets. But a teenager’s death has forced Georgians to wonder how far they have really come. 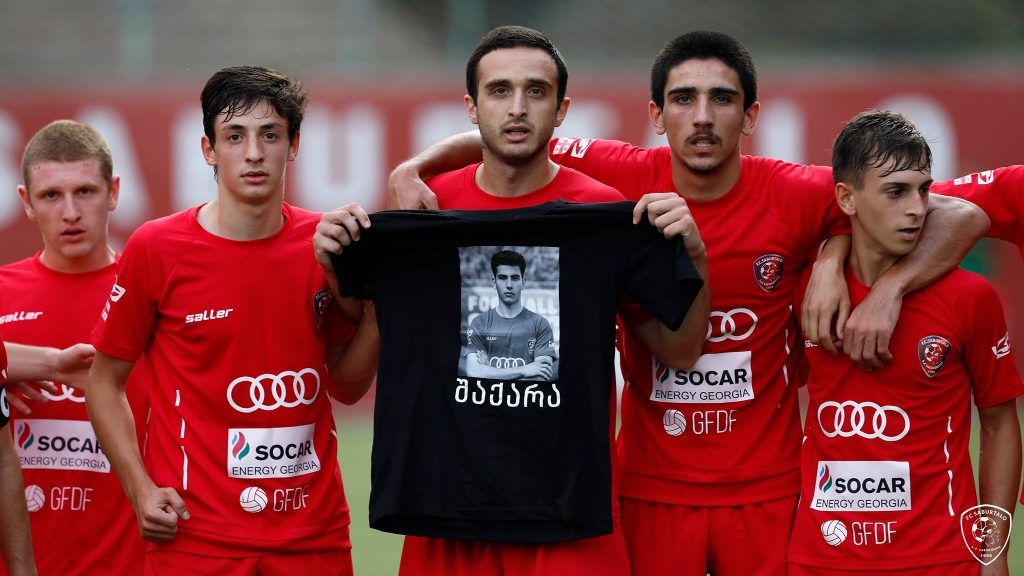 The last day in the life of Giorgi Shakarashvili, a promising 19-year-old soccer player, was supposed to be a fun one. He was invited to a birthday party, and it was set to be a blast: the hosts had rented an entire house in the historic town of Mtskheta just outside Tbilisi and brought in a DJ.

The birthday girl, Ani Gabechava, was turning 18 and wanted to celebrate her coming of age in style, away from prying parental eyes and possible noise complaints from the neighbors.

Shakarashvili didn’t know Gabechava, but he was invited by a common friend and got in touch with her on Instagram to make sure he was welcome. Gabechava replied that she was looking forward to having him.

What happened next shocked Georgia, and the ensuing drama has forced the country to reckon with a lawless culture, among even its most privileged youth, that it thought it had left behind in the bad old 1990s.

Decked out in shorts and a Hawaiian shirt, Shakarashvili headed out to Mtskheta the evening of the party, June 18, along with other guests, mostly also late teens from Tbilisi’s middle class.

The party hadn’t even started – Gabechava and some friends were still setting up tables and the sound system – when an insulting remark sparked tension between two groups of boys from separate Tbilisi neighborhoods, Saburtalo and Nakhalovka. Shakarashvili was from a different neighborhood, but he was friends with the Saburtalo crowd through sports.

A few hours later, at about 11 p.m., Gabechava was alerted to a fight that had started outside and she went to try to break it up. “It was useless, nobody listened to me,” Gabechava later said in a TV interview. CCTV footage showed Shakarashvili struggling to pull the fighters apart.

One of the combatants got hit over the head by a rock and was bleeding, and with a friend sped back to Nakhalovka to, as is the wont of young men in Georgia, gather backup.

“Boys form fraternities, usually based in their neighborhood, and it becomes their pack, their safety net that often lasts for life,” Tbilisi-based psychologist Giorgi Tsotskolauri told Eurasianet. “It’s a parallel world with its own rules and it thrives when formal rules governing society are seen as inadequate, unfair and poorly enforced.”

Meanwhile, the remaining guests decided to head back to Tbilisi and continue the party at another house there. Some piled into cars, and those who couldn’t fit – including the Saburtalo group – walked out to the highway to try to hitch a ride. From the opposite direction, two cars were already speeding back to Mtskheta with the Nakhalovka muscle.

According to police, the cars caught up with the group of hitchhikers on the highway, near a bridge over the Aragvi River. Several of the Nakhalovka men, including some professional wrestlers, jumped out of the cars to chase and beat the others. In the melee, some fled into bushes, and Shakarashvili ran onto an exit ramp under the bridge, where he was cornered.

His body was found four days later, mutilated and drowned.

The killing became a media sensation and it continues to dominate the news. Five men have been arrested on murder charges, but the crime has sparked a larger national conversation about the way the country seems to be failing its young people.

To many, the killing was just the latest and most vivid example of how a persistent pattern of juvenile crime in Georgia is linked to cultural norms, such as a particularly Caucasian manifestation of ego and toxic masculinity.

“Aggression is intrinsic in humans,” said Ketevan Pilauri, a psychologist working with juvenile offenders. “It is our way of coping with frustrating situations. But the ways we [Georgians] express anger in our behavior, including through violence, and how we manage our impulses are largely an acquired knowledge, like reading and writing.”

The way Georgian boys are raised plays an instrumental role in the country’s youth violence, Pilauri told Eurasianet. “Violent behavior among men is very much normalized in our society,” she said. “We say ‘he is a man so of course he hit back, of course he started a fight.’ Men may be generally more prone to violence than women, but in our case environmental factors take precedence over biology. We expect, almost encourage, men to act violently.”

What further sets Georgia apart from many other countries, including its own ex-Soviet peers, is that vendetta-style crime among youth here is not tied to income, education or postal code. Several of Georgia’s recent high-profile cases have in fact occurred in Tbilisi’s middle- and upper-class neighborhoods.

In August, a former prime minister’s grandson allegedly stabbed the grandson of a Georgian beer magnate in the middle of the city’s poshest neighborhood. In 2017, a brawl among some teenagers ended in the deaths of two students from the city’s most prestigious high school.

The incidents have been an unwelcome reminder of the 1990s when following the collapse of the Soviet Union, the country descended into civil war and lawlessness. Then, too, many of the criminal gangs evolved from neighborhood-based social groups.

“This tragic reality was particularly felt in the center of Tbilisi, where privilege and entitlement drove impunity and irresponsibility. Sons and grandsons of elite families turned these neighborhoods into a battleground,” commentator Salome Asatiani wrote in a blog post.

The zeitgeist of that era is perhaps best captured in the 2013 film In Bloom, a story of two girls living in the rough world of street violence, bride-napping and poverty. “Today, all these years later, we are still far from facing the traumas of that period, let alone coming to terms with them,” Asatiani wrote. “The dark 1990s became a stereotype and we all know its clichés like ‘crime, war, bread lines.’ But we have yet to manage to look behind these clichés and to ask the painful questions.”

The way Georgian children are raised today has a direct lineage from the 1990s, psychologists argue.

“Children are still taught to be tough, pushy, to bully or get bullied,” Tsotskolauri said.

“Society obviously does not normalize extreme forms of violence like murder, but it becomes difficult to draw a line when children are not taught how to regulate their emotions, how to vent their anger in socially acceptable ways,” Pilauri said.

The Shakarashvili case also has drawn attention to the vacuum created by the decline of the “thieves-in-law” – a criminal organization that used to regulate Georgia’s streets – and the failure of the police to effectively step in to replace them.

During the Soviet Union, the thieves-in-law were – along with wine and fruit – one of Georgia’s most famous exports. A form of mafia boss, the thieves-in-law formed a sprawling gangster network, featuring an elaborate hierarchy, taxation system and its own rules of arbitration.

In the late Soviet and early post-Soviet periods, the thieves-in-law were the preferred means of dispute resolution for young men: While their own methods could be brutal, they also managed to use their authority to prevent small neighborhood conflicts from escalating. This was all the more so when the police at the time were seen as no less brutal or corrupt.

This began to change during the 2000s, when the government began a sweeping crackdown on both crooked cops and the thieves-in-law. The police’s reputation is now far better, but the transformation has slowed in recent years and Shakarashvili’s murder has laid bare Georgians’ continuing lack of trust in the police to protect them.

In the wake of the crime, many Georgian commentators have noted how Georgia’s youth are so desensitized to violence that it doesn’t even occur to them to call police. “Had I made one call, everything could have ended differently,” Gabechava recalled with tears in the TV interview.

Not that calling the police made much of a difference on the night of June 18. One of the partygoers, photographer Iakob Bregvadze, did dial the local version of 911 when the car with Nakhalovka backup caught up with him and the other boys on the highway. “They have sticks and iron bars, many have injuries, please come soon,” Bregvadze frantically told police as he hid from his pursuers in an abandoned shack off the highway. Authorities made the call public amid intense media coverage and public pressure.

A police car came to pick up Bregvadze near the bridge, but the officers did not get involved further. They drove off with Bregvadze, while Shakarashvili, possibly still alive, lay in the river under the bridge.

The performance of the police has been harshly criticized: for their passivity in responding to Bregvadze’s call, for not (as protocol requires) sending an ambulance following that call, for taking four days to find Shakarashvili’s body, and for a series of inconsistencies in the subsequent investigation of the crime.

Meanwhile, the way that the neighborhood wrestlers escalated the fight also could point to the inability of street justice to handle cases like this as it used to.

The violent incidents like Shakarashvili’s murder “might indicate the weakness and confusion of what was once a robust and rich way of managing social relations” by thieves-in-law, said Gavin Slade, a British researcher who has written extensively about organized crime in the former Soviet Union. “A weak subculture can easily dovetail with already internalized norms of non-cooperation with the police, but it is not able to exert strong moral structures on other forms of behavior, in particular the use of violence,” he told Eurasianet in an email interview.

“What you have now is the worst of both worlds,” he said. “Confused and confusing subcultural remnants that can no longer govern behavior and bring order to the streets, with a diminished police force that no one turns to.”