The prime minister is coming, please stand up

With a new formal protocol, Nikol Pashinyan seems to be adopting a new, steely image. Will the style be translated into substance? 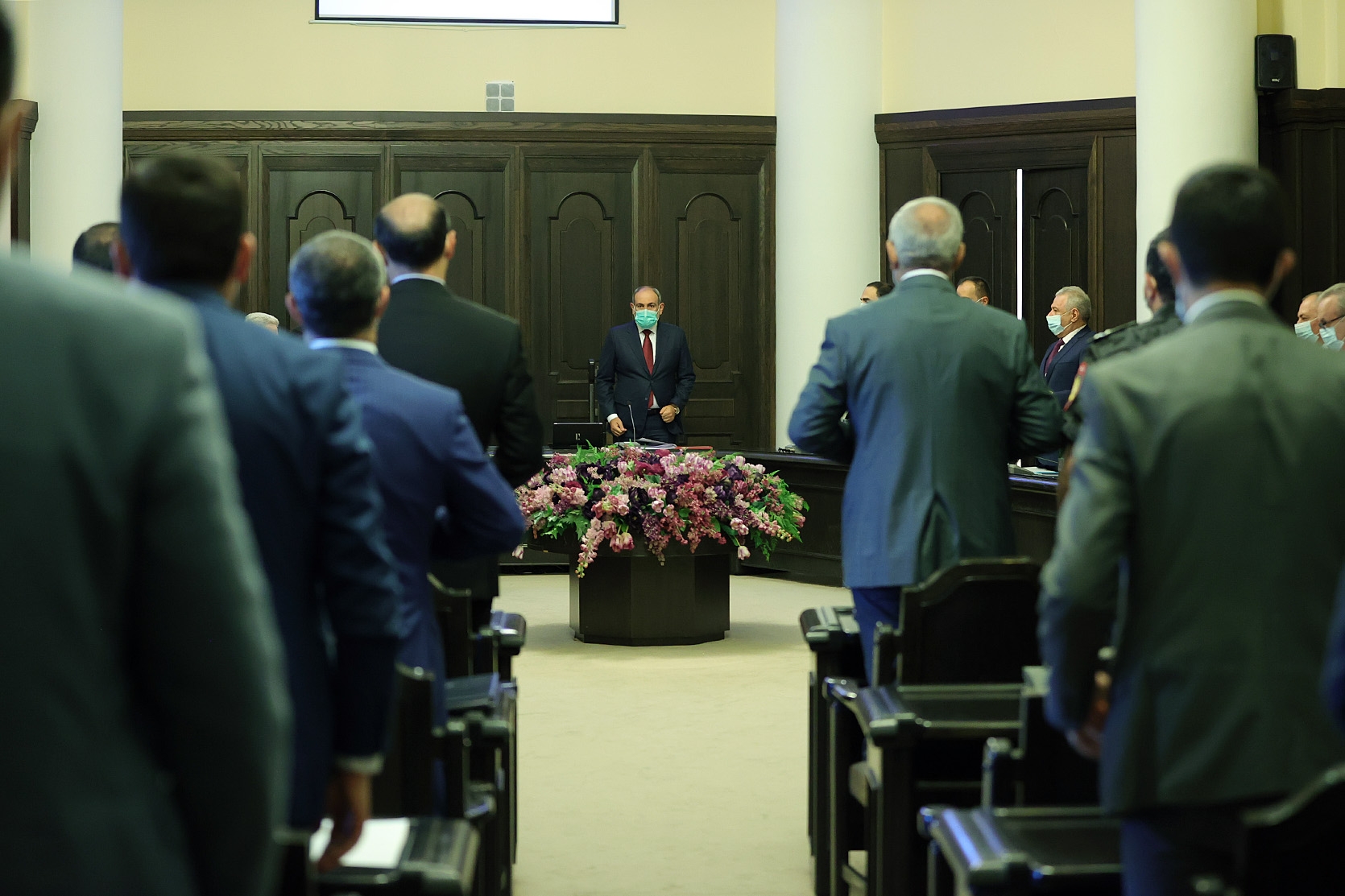 All rise for the prime minister. (photo: primeminister.am)

As a cabinet meeting began on June 24, the director of the Armenian government’s protocol office gave an unusual warning: When the prime minister walks in, the members were to greet him standing up.

The unprecedented gesture did not go unnoticed, and Romanos Petrosyan, the minister of the environment, was forced to explain to journalists who cornered him following the meeting: "It has nothing to do with dictatorship," he said. “When the head of state enters the room, it is correct to stand up.”

When the journalists observed that Nikol Pashinyan, who was reelected prime minister on June 20, had never before observed that kind of protocol, Petrosyan explained: "Then it was velvet, now it's steel."

Pashinyan first came to power in 2018 as a man of the people who led street protests that became known as the “Velvet Revolution” for the nonviolent change of power it managed to effect. But in these elections, which Pashinyan was forced to call after his authority was weakened following last year’s loss in the war to Azerbaijan, the prime minister has adopted a new, harder image, repeatedly promising that he was going to dispense with the velvet and replace it with steel. At a post-election rally, he promised that he would institute a “dictatorship of law” and was ceremonially presented with a “steel mandate.”

Under Pashinyan’s predecessor, Serzh Sargsyan, the cabinet also was expected to stand up when he entered the room, but that was consistent with Sargsyan’s formal demeanor.

Pashinyan, whose baseball cap and backpack became icons in 2018, brought that more democratic style to office. His accessibility to the press, frequent meetings with regular citizens, and constant use of Facebook live videos also made him stand out as a more informal leader.

Since the war, though, he has curtailed his access to the press, meets regular citizens only with heavy security surrounding him, and significantly cut back his Facebook usage.

What remains to be seen is how much the steel style is translated into substance.

Members of the opposition, which lost to Pashinyan’s Civil Contract party in a landslide in the recent elections, have been claiming that Pashinyan is starting a “witch hunt” against their supporters. On June 22, the country’s Human Rights Ombudsman Arman Tatoyan reported that the mayor of Odzun, a town of about 5,000 in Armenia’s northern Lori province, was beaten by a group of people demanding his resignation.

The mayor, Arsen Titanyan, was a supporter of Robert Kocharyan, the former president who led the “Armenia” alliance that came in a distant second in the polls. Titanyan told local media that he was attacked by a group of roughly 10 people which included Aram Khachatryan, the governor of Lori and a Pashinyan ally. The country’s Prosecutor General opened a criminal case and it was referred to the Special Investigative Committee. Khachatryan denied the allegations.

At a post-election press conference, Kocharyan predicted that “repressions” would follow. A spokesman for his alliance, Aram Vardevanyan, said that many other local officials have come under serious pressure from the government to resign following the election. "If the authorities do not put an end to this practice, they will trigger a new political crisis," Vardevanyan said in a statement.

Pashinyan’s promise of a “dictatorship of the law” has little to do with the law, charged Avetik Iskhanyan, the head of the Armenian Helsinki Committee, a human rights organization. "He meant a dictatorship of revenge,” Iskhanyan told 5th channel, a Kocharyan-affiliated television network, on June 24. “Everyone opposed him and criticized him, especially those who have influence in state bodies or outside, will become a victim of revenge."