Kamil Ruziyev took cases nobody else would and made plenty of enemies along the way. 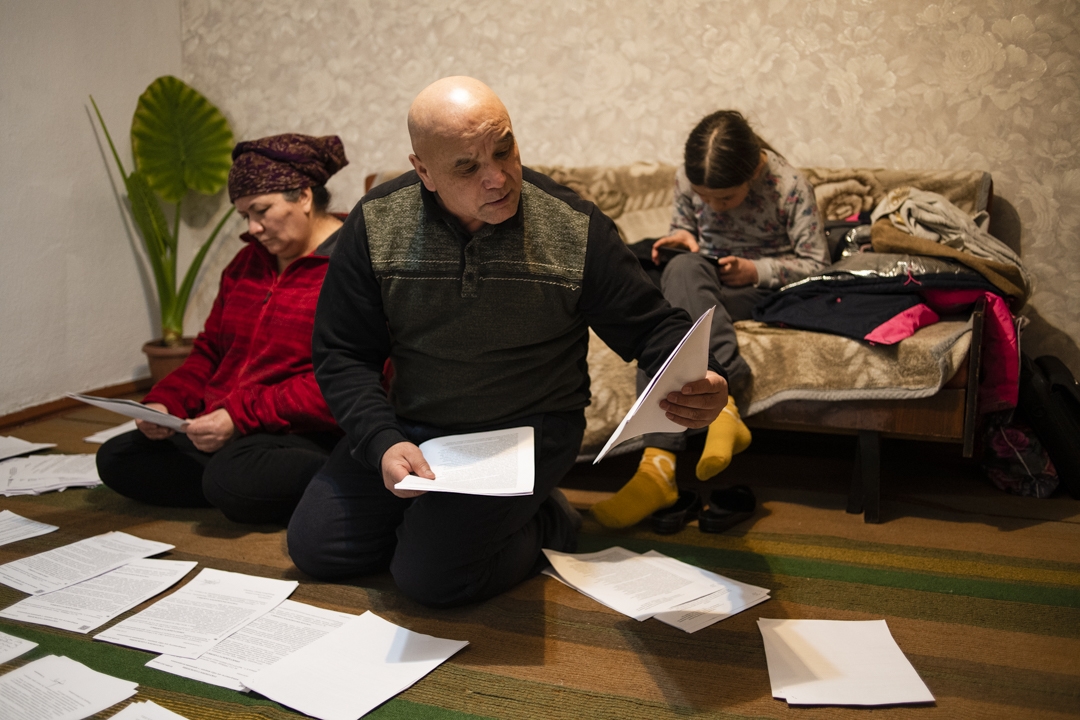 Ruziyev helps a client prepare documents for court at her home in Karakol. (photos by Danil Usmanov)

Last month a photograph circulated on Kyrgyz social media showing a woman’s entire face swollen, with bruises that enclosed both eyes and blood speckled around her mouth.

The woman in the photo, Aizat Usenbayeva, told Eurasianet that it was the eighth time her husband had beaten her.

This time, as he rained down blows on her in the street outside her house, she believed he would finally follow through on his threat to kill her.

Luckily, he was interrupted by a passerby.

Usenbayeva, who is disabled, summoned the strength to phone police in the provincial city of Karakol later that day. Officers took her husband in for questioning, but he was released the same day.

Police only held him overnight several days later after Kamil Ruziyev, a crusading lawyer who has been facing jail time for the last two years, publicized the case by posting the photo online and giving interviews to the media.

“I met Kamil Ruziyev out of chance. Probably God sent him to me to keep me alive,” Usenbayeva told Eurasianet.

The life of a rights defender in Central Asia is rarely free of complications.

For all the words of gratitude from clients on one side of a crooked justice system, there are threats and worse from its enforcers, who don’t like seeing their impunity challenged.

State scrutiny is particularly intense for small-town advocates, whose support networks tend to be thinner than those of their colleagues in major political centers.

The most obvious example is the tragic fate of Azimjan Askarov, who was in 2010 convicted to life imprisonment, ostensibly for the murder of a policeman during ethnic unrest in the south of the country, among other charges.

Supporters of Askarov, an ethnic Uzbek, called the case revenge for his campaigning on behalf of citizens who suffered at the hands of police in the town of Bazar-Korgon, where he lived.

The accusations against Ruziyev took shape a few months before Askarov’s death and have persisted despite a change in the nation’s leadership.

That May 29, Ruziyev was in court to file a lawsuit against the state national security committee, widely known by its Russian-language acronym GKNB.

Outside the courtroom, he was met by officers from the same body, who offered to escort him to see the head investigator at the committee's Karakol branch.

This investigator was going to provide him with responses to complaints he had filed against the GKNB, the officers said.

After arriving in the building, it became clear that the GKNB men had no intention of letting him go.

According to Ruziyev, one of the officers threatened to “rip [me] apart for filing complaints.” Another goaded him that he had “long sought a tour [of the GKNB building]. Well, here you go.”

Ruziyev was placed in a GKNB cell and began a hunger strike.

On the first night of his incarceration, as his body weakened, he asked for a measurement of his blood pressure. This request was refused.

His lawyer arrived on the third day of his confinement, May 31, but was barred from seeing her client.

That day he was informed about forgery charges against him – charges that related to a medical document that he had obtained in March. He and supporters say the case is a set-up designed to silence him.

His release into house arrest was ordered by a court that evening, just as a social media campaign, #FreeKamilRuziev, was cranking into gear. 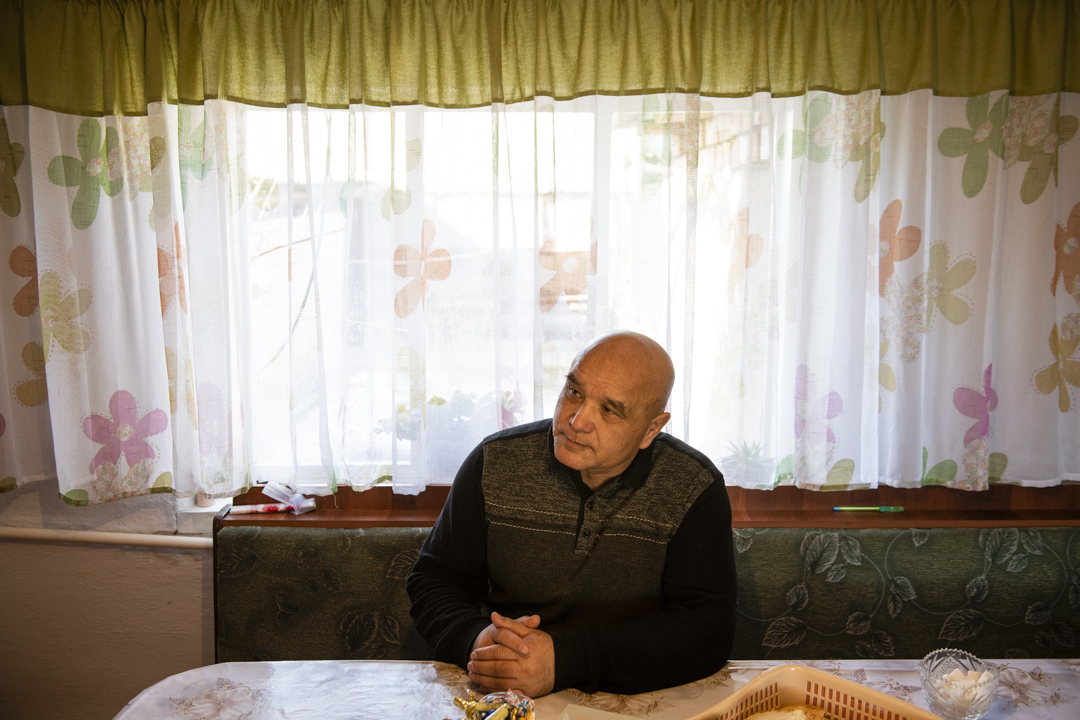 Ruziyev, who faces five years in jail, has been a rights defender for more than two decades.

For years he worked with Kyrgyzstan’s state ombudsman and in partnership with the U.S.-based global rights monitor Freedom House.

In the last decade he has devoted most of his energies to representing clients in Issyk-Kul region, where he lives: domestic violence, torture and discrimination cases are his regular fare.

During an interview with Eurasianet in a Karakol cafe, he recalled one particularly egregious case from 2014, when a local man had been held hostage and tortured by police in the home of one of the officers, so as to obtain a confession that he had been stealing telephones.

Ruziyev believed he had strong evidence against the officers, but the man was beaten up by a gang of men in plainclothes before he could testify in court.

“The courts acquitted the police officers. And, most notably, the perpetrators won promotions,” Ruziyev said.

Ruziyev believes his conflict with a police investigator may have motivated the case against him.

Their standoff began after Ruziyev filed complaints against several policemen when foreign citizens approached him, claiming the officers had tortured them in a detention facility.

During one confrontation in the regional police headquarters, the police investigator pointed a pistol at Ruziyev and pledged to kill him right then and there – an event that led Ruziyev to file yet another complaint against him.

Ruziyev said the officer’s intimidation campaign continued even after he resigned. The former investigator attempted to attack him in May of 2020, Ruziyev said, the same month that Ruziyev was arrested.

The medical certificate Ruziyev is accused – along with a nurse – of forging, was intended to attest to his absence from court over his health issues and gain more time for an appeal in one of his cases, he said.

Ruziyev told Eurasianet that he even checked the document’s validity with a local prosecutor after receiving it from the hospital without a doctor’s signature on it.

The terms of Ruziyev’s restricted freedom at present allow him to travel inside Kyrgyzstan and continue his work, but supporters believe the case is being dragged out as leverage over him.

“The judge keeps changing. There have been four of them now,” he said, noting that hearings can be “weekly, monthly, it depends on the judge.”

Ruziyev’s case has been flagged by the United Nations Special Rapporteur on the situation of human rights defenders, Mary Lawlor, who last November called on Kyrgyzstan to investigate the threats made against him.

Steve Swerdlow, a long-time monitor of rights in Central Asia and a professor at the University of Southern California, told Eurasianet that the case is an example of the “malicious persecution” faced by local rights defenders.

“Each court session costs Ruziyev money for legal representation that he doesn't have, and the specter of a five-year prison sentence still hangs over his head,” said Swerdlow, whose USC students recently attended in Karakol a talk provided by Ruziyev on flaws in Kyrgyzstan’s legal system pertaining to domestic abuse.

It is this issue, despite the challenges he is personally facing, that preoccupies Ruziyev at present.

He complained that amendments to the criminal code passed last year under President Sadyr Japarov have further weakened the position for domestic violence victims.

“If earlier, a woman filed a complaint about domestic violence against her, a case was immediately opened. Now this is not so. Instead, the complaint is checked for 10 days or more to determine whether her claim is legitimate and well-founded,” Ruziyev told Eurasianet.