Immediately following the heavy fighting, pro-government media promoted an irredentist Azerbaijani project on Armenian territory. Then, just as quickly, they disavowed it. 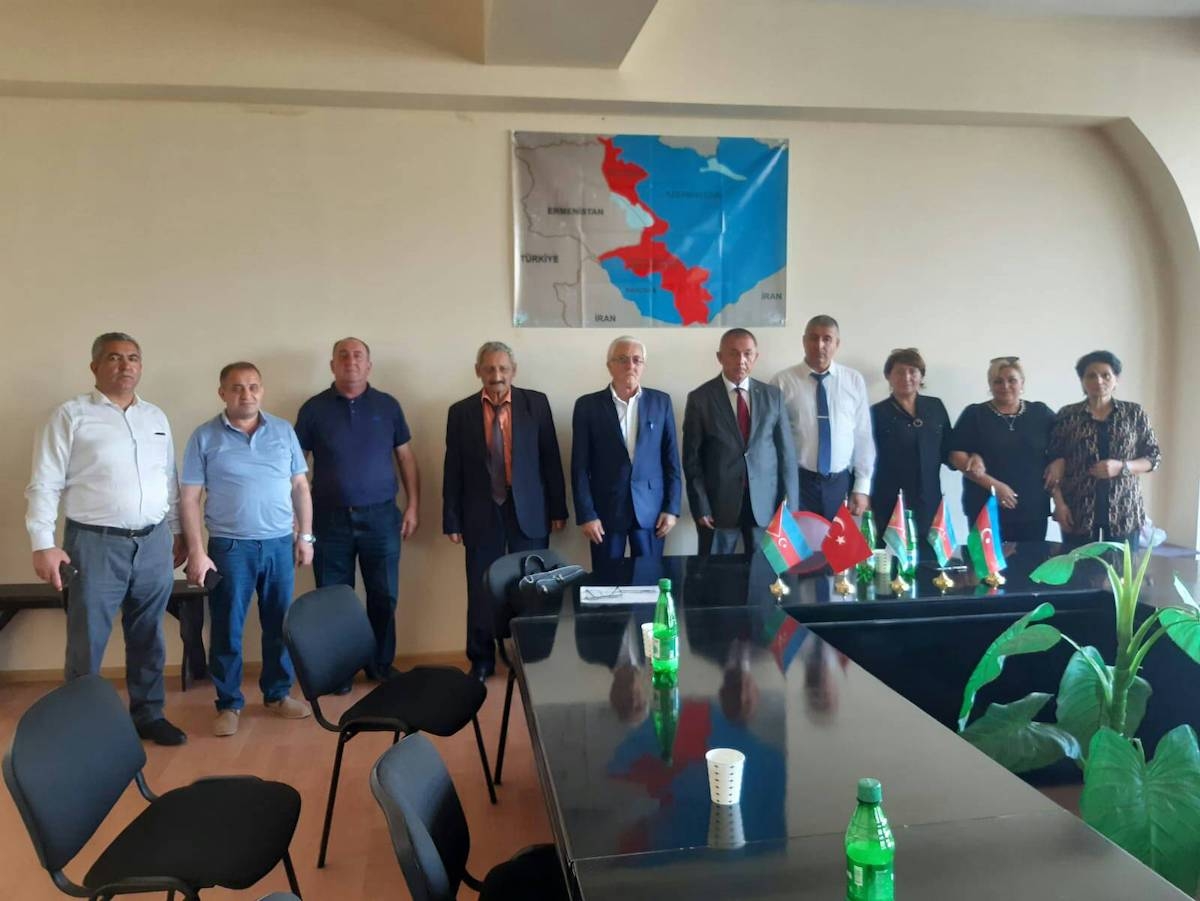 The would-be leadership of the “Goycha-Zangazur Republic” during a recent meeting in Turkey (photo: Facebook, Rizvan Talibov)

On September 19, just days after Azerbaijan had launched an attack on Armenia, reviving fears of a larger invasion, an ominous campaign was launched in Azerbaijani pro-government media.

Several news websites published an announcement about the formation of a “Goycha-Zangazur Republic" (GZR) on what is currently Armenian territory. Its borders would be that of the current Sevan and Syunik provinces of Armenia (the names of which in Azerbaijani are Goycha and Zangezur, respectively).

The announcement came at a fraught time: In the context of an unprecedented attack on targets inside Armenian territory (mostly within the territory of the would-be GZR), reports that Azerbaijani forces had taken more territory (again, in the “GZR”), and amid a broader rise in irredentist discourse from Baku.

The republic project even got some official endorsements: Tural Ganjali, a member of Azerbaijan’s parliament representing Stepanakert (which Azerbaijan calls Khankandi and is still under Armenian control in Nagorno-Karabakh), offered his support to the GZR. “The Goycha-Zangazur Republic will be a vital element in achieving a just peace and stability in the region. Long Live the Goycha-Zangazur Republic!” he wrote in a September 19 Facebook post.

But the campaign was quickly quashed. Most of the websites that had posted the announcement deleted it the same day; it now remains on only a few, little-read outlets. Ganjali deleted his Facebook post within hours, though some users made sure to screenshot it before he did.

The next day, pro-government media began a campaign discrediting the idea of the GZR and in particular its self-proclaimed president Rizvan Talibov, who has been conducting himself (on Facebook, at least) as a real head of state, announcing appointments of ministers and other official decisions.

The news agency APA published a piece it labeled an “investigation” titled, “Whose adventure is the ‘Goycha-Zangazur Republic’?” It argued that Talibov “aims at forming a wrong interpretation about Azerbaijan’s real purpose and goals” vis-a-vis its conflict with Armenia.

“This person [Talibov], who considers himself the ‘president’ of Western Azerbaijanis, actually has no scientific knowledge about or research on Western Azerbaijan; he knows neither the history nor the geography of Western Azerbaijan,” the piece read. “It is impossible to find a single serious person around him, and most of the people he named, appointed, and included in the structures do not even know about it,” it continued. “Talibov ‘appoints’ and gives ‘authority’ of the highest positions to anyone, regardless of their identity or political views, in return for flattery, or a meal, or 5-10 manats.”

In another APA piece published on September 21, member of parliament Hikmat Babaoghlu wrote: “The so-called ‘Goycha-Zangazur Republic’ is a political-ideological terror against Azerbaijan.”

He argued that it weakens Azerbaijan’s public case to create what it calls a “Zangezur corridor,” a transportation route connecting Azerbaijan’s exclave of Nakhchivan to the mainland crossing Armenian territory. That narrative around the corridor project often has suggested irredentist claims to Zangezur/Syunik, which Azerbaijan President Ilham Aliyev has repeatedly referred to as “historic Azerbaijani territory.” Babaoghlu said that wasn’t true, and that the GZR project muddied the waters on the issue.

“Such a political hypocrite [as Talibov] has no moral right neither to create the ‘Goycha-Zangazur Republic’ nor even to pronounce these holy names,” Babaoghlu went on. “Because this idea, while Azerbaijan is insisting on the issue of the Zangezur corridor, creates the impression that Azerbaijan does not intend to open a corridor in Zangezur, but to create a state there. This is a real provocation against the opening of the corridor.”

It is not the first such project to be presented in recent years. In 2020, an Azerbaijani academic in Turkey, Gafar Chahmagli, formed what he called the Republic of Western Azerbaijan (Irevan), which would have had an even larger territorial reach. That project (which also was called the Irevan Turkish Republic) was connected to another group with apparent government links, the West Azerbaijan Community (WAC), but it did not get the (brief) level of state endorsement as the GZR.

Should it ever be revived, the recent announcement offers more details about the would-be state. The capital would be either Kapan or Vardenis (it used the Azerbaijani names, Gafan and Basarkecher, respectively), but “temporarily” the center would be in either Baku, Ganja, or in Artvashen, an Armenian exclave inside Azerbaijani territory currently controlled by Azerbaijan; Azerbaijanis call it Bashkend.

It would exist inside the current Republic of Armenia “on a confederal basis” and “accepts coexistence with the Armenian population.” It would accept dual citizenship, which would be open to current citizens of Turkey, Azerbaijan, Iran, Armenia, Russia, the United States, and European countries,” it said.