Beishenaliyev enjoys a close relationship with the president. 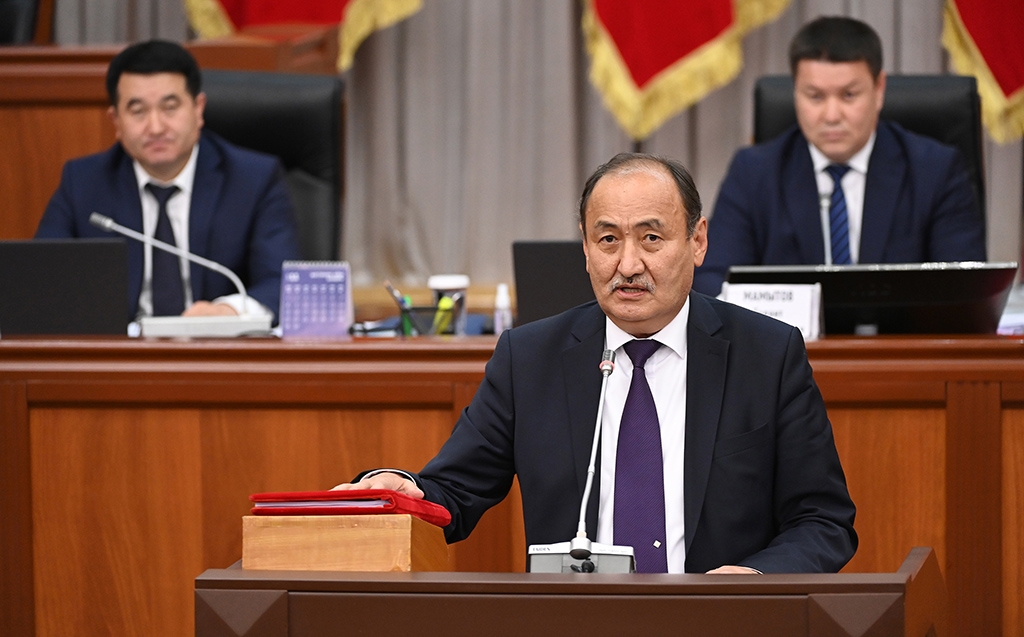 The health minister says he listens only to God and the president. (government handout)

Staff and patients at the eye clinic of Professor Almazbek Ismankulov first sensed trouble when they heard the commotion.

It was April 4 and outside the main doors, a crew of workers was unloading a pile of sand so as to bar people from entering or leaving. Supervising all this was Kyrgyzstan’s Health Minister Alymkadyr Beishenaliyev.

“Let them stay inside. People in Ukraine are going hungry, so let them go hungry too,” said Beishenaliyev, flashing a golden-toothed smile.

The clinic, the minister had said, was not paying enough to rent its premises, which stand on the property of a government hospital not far from the center of the capital, Bishkek. When Ismankulov, the founder of the clinic, stood his ground, the head of the Health Ministry resorted to robust measures.

This is classic Beishenaliyev. Since being appointed to his position in October 2020, amid the hubbub of political unrest that brought his patron, President Sadyr Japarov, to power, Beishenaliyev has distinguished himself for his medically questionable stances and aggressively confrontational style. His time in office has covered the bulk of the COVID-19 pandemic – a crisis with which Kyrgyzstan’s poorly resourced healthcare system has struggled to cope.

He is now being placed in charge of implementing a radical health system reform program designed to slash costs and, according to the government, optimize efficiency. Beishenaliyev’s irascible and eccentric manner is inspiring little confidence.

The Ismankulov saga explains in a nutshell how the minister operates.

Earlier this year, the minister began grumbling that the professor’s private eye clinic, which has been in business for around 25 years, was short-changing the state by paying only 214,000 soms ($2,350) to rent out a three-story building within the grounds of Bishkek’s City Hospital No. 2. Given how little space the Health Ministry has at its disposal, Ismankulov should give up the building so that the departments of neurology and cardiology could be located there, Beishenaliyev has said.

In February, the city hall unilaterally terminated the lease agreement, which had been due to expire in 2024. Ismankulov was given 10 days to leave. But the professor refused, saying that he had paid rent through to June 2022 and that city hall and Beishenaliyev were acting illegally.

Beishenaliyev is no fan of tedious court procedures and has sought to deal with this predicament in a hands-on manner. On March 10, after the city hall deadline elapsed, he turned up in person at the eye clinic and confronted the management.

“You tell your boss that if you don’t free the building by today, I’ll come back with my guys and smash everything,” he told a perplexed administrator in a scene captured on camera.

A few moments later, the minister was handed a phone so that he could speak to Ismankulov in person.

“Hey you jackass, I’ve been looking for you for days. If you don’t vacate in three hours, there’s going to be trouble. Got it?” Beishenaliyev barked into the phone.

When a member of staff complained that the minister was behaving in an unlawful manner, he responded with another crude threat intimating physical violence, suggesting he would “re-count their teeth.”

The clinic continued working undeterred, which led to the minister trying to block the entrance with sand. Ismankulov says he has filed a complaint with the General Prosecutor’s Office.

“The man is just not qualified to do this job,” Ismankulov said. “He used to be a surgeon, but he is not suited to do this job. That’s why we have so many of these scandals.”

Whether or not he is qualified, Beishenaliyev, who appears to enjoy the complete trust of President Japarov, is almost certainly here to stay for the time being. When not picking fights with private clinics, he is busy trying to carry through a five-year healthcare reform program unveiled last year.

Under this shakeup, a range of district polyclinics, larger territorial hospitals, and epidemiological surveillance centers will be merged, thereby winnowing the state’s network of 356 medical service providers to 274. The Health Ministry says the streamlining will save large amounts of money and enable the improved use of equipment at its disposal. The plan, which has drawn vocal protests from the medical community, is also seeing much personnel trimming.

Beishenaliyev likens his reforms to the grand sweeping changes effected by the early 18th century Russian Tsar Peter the Great, also known as Peter the First.

“When Peter the First did his reforms in Russia, he too was hated by everyone, and history later showed that he did everything right,” Beishenaliyev told news website 24.kg in December.

One clinic to have got the chop already is the Reconstructive Surgery Center, part of the Chui Regional Hospital. It was headed by 85-year-old Ernst Akramov, a well-known medical expert of mixed Uzbek-Tajik heritage, who was also made redundant.

Not content with firing Akramov, Beishenaliyev doubled the offense by accusing him of harboring ethnic prejudices.

“He’s a jackass,” Beishenaliyev said, using his go-to slur. “If he’s a jackass, why would I deny it? He behaved himself improperly with Kyrgyz people. He considered [ethnic] Kyrgyz not to be people at all.”

Considering the incendiary nature of those remarks, Akramov accepted his dismissal with remarkable grace, saying that it was not his place to interfere in the government’s reform agenda.

The activist community has been less forgiving, however, and last month demanded that Beishenaliyev be held to account for whipping up ethnic tensions. Lawmaker Dastan Bekeshev said the minister was setting a bad example for the public.

“If somebody in office is permitted to conduct themselves so abrasively, to disrespect a worthy and respected doctor, then citizens will behave themselves that way too,” Bekeshev said. “If the Health Minister is behaving inappropriately, the president should be reacting to this.”

It seems there is almost no public outburst grave enough to cost Beishenaliyev his job, however.

In February, he fired Sabyrbek Djumabekov, who also served as Health Minister in the early 2010s, from his post as head of the Bishkek Research Center for Traumatology and Orthopedics. In typical fashion, he accompanied this with a barrage of allegations and insults. Djumabekov, he said, was hiring his own friends and enabling his family to grow wealthy off the healthcare system. That sparked a furious response from Djumabekov, who accused the minister of spouting “100 percent lies not supported by any evidence.”

“[If any of his students] attain international standards or get into Cambridge University and you can prove this to me, I will hang myself,” the minister said.

On paper, the 62-year-old does have legitimate credentials to act as health minister. According to his official biography, he graduated from the Kyrgyz State Medical Institute in 1983 and continued pursuing medical studies in the decades that followed.

But his credibility took a severe hammering last spring, just as the country was about to enter its second major wave of COVID-19 cases, by recommending coronavirus patients consider consuming a purported cure of a brew made with a poison root. One day in mid-April, he even gathered skeptical and amused journalists to drink a brew made from the roots of the wolf's-bane plant to prove that consuming it need not be fatal.

Beishenaliyev’s durability is in large part the result of his fierce loyalty to President Japarov. The wolf's-bane plant episode was a good case in point. It was Japarov who had initially suggested the cure. Rather than quietly ignore the idea, the Health Minister offered it his full-throated support.

“For a long time, Sadyr Nurgozhoevich’s father used [wolf's-bane] and he passed on this knowledge to his son. I too want to learn, and I am asking him [Japarov] every day to come to us for an hour and teach us about dosing,” he told journalists, referring to the president by his patronymic.

Last month, Beishenaliyev told journalists that he consulted neither doctors nor any other experts when carrying through his reforms. There are only two voices he listens to, he said: God and Japarov.

An old friendship between Beishenaliyev and Japarov was definitively forged in the unrest that brought the latter to the presidency in October 2020. The minister says he and his colleagues were in constant communication with Japarov, who was in prison serving kidnapping charges, on the night of October 5, the day that anger over a contentious parliamentary election spilled over into violence in Bishkek.

“He was giving us instructions the whole time. ‘Rise up, go there, get the people together.’ He guided us. When we liberated him on the night of October 5, he took the reins,” Beishenaliyev told journalist Leila Saralayeva in January.

What followed was the fulfillment of a decade-old pledge.

“In 2010, [Japarov] suggested that I run for parliament. He said to me: ‘You’ll be an MP or you’ll become health minister. I promise you that’,” he said.