Georgian cinema has been enjoying a renaissance, becoming a darling of the international independent film world. But it’s also running into political problems at home. 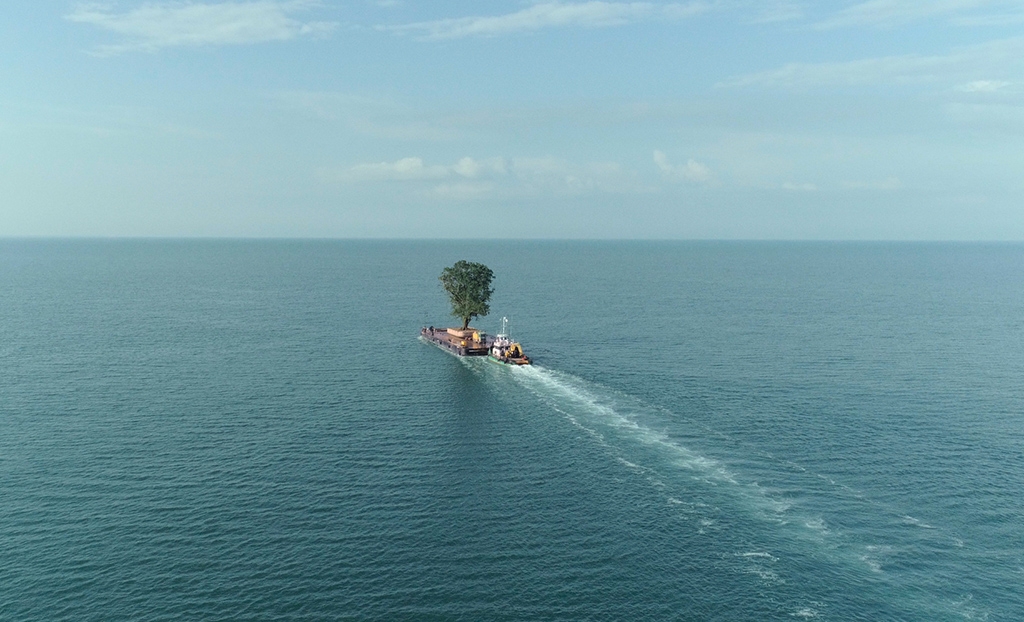 The 2021 film Taming the Garden has become Georgia’s most celebrated documentary in recent years, competing at the Sundance Festival, showing at the Berlinale Forum, and garnering a variety of international awards. An American production company just bought the rights to show the film in the United States and Canada.

But at home in Georgia, it’s faced a frostier reception.

No major movie theater showed the film. Instead, it has been screened only in small, countercultural spaces like experimental theatres and cafés. “The film had been screened at virtually all major international film festivals, yet in Georgia it is shown essentially in the underground,” its director, Salomé Jashi, told Eurasianet.

The issue: its politics.

The film had a series of screenings scheduled at the Georgian Film Academy, Tbilisi’s main venue for showing and discussing independent film. But at the last minute the Academy’s director, Mindia Esadze, told Jashi that her film “creates political divisions in the public.” It did get shown once at the Academy’s movie hall, on March 28, but subsequent screenings were canceled.

On first glance, the film is not particularly political. It focuses on an eccentric billionaire’s unique hobby: uprooting massive, century-old trees around the country and replanting them in his seaside park. Taming the Garden captures hypnotic scenes of enormous trees seemingly coming alive at the billionaire’s whim. Pedestaled upright on heavy-haulers and barges, arboreal giants go lumbering through the countryside and sailing across the sea.

But the billionaire also is the country’s behind-the-scenes leader, Bidzina Ivanishvili, who midwifed the ruling Georgian Dream party into existence a decade ago. He briefly served as prime minister, and while he no longer holds any formal position, his informal power remains immense and little stands in his way when he sets his mind to rearranging the nation’s presidents, ministers – or trees.

While Ivanishvili is barely present in the Taming the Garden – his name uttered only a handful of times and he is never pictured – the film shows that he can almost literally move mountains in his country. “He is kind of a mystical protagonist of the film and also of Georgian politics,” Jashi said. “Like in politics, you never see him, but he is everywhere at the same time.”

The news of award-winning documentary getting shut down for political reasons in Tbilisi swiftly snowballed into a major scandal, as concerns have been mounting about the government’s heavy-handed interference in Georgian art and culture. The controversy also struck just as Georgian film was enjoying a new renaissance, with the small country becoming a darling of the international independent film world of late.

Jashi’s film is perhaps the most prominent example of a new wave of Georgian documentaries and dramas that have been making a splash in the independent film world.

American film critics David Fear and Kenneth Turan singled out Taming the Garden as one of the highlights of the last Sundance Festival. “The sight of these astonishingly old and large trees just floating serenely along the coast of the Black Sea is just – that’s a vision I will never forget,” Turan told NPR. “The whole country is the real garden which he has attempted to subdue, reducing it to the tamed sterility of private property,” the Guardian wrote in its review of the film.

On the fiction front, critics also raved over 2021’s What Do We See When We Look at the Sky?, a fairytale-like shaggy-dog story. Described by Variety as “magical and mischievous,” Alexandre Koberidze’s film is a love story that also looks past its love-struck protagonists to focus on the romance of the everyday world around them, beautiful small things we usually take for granted.

“When it comes to form, it is hard to do something new and different in the cinema, yet that film did just that,” Georgian film critic and historian Teo Khatiashvili told Eurasianet.

The worlds of sports and organized crime clash in Negative Numbers, a 2019 prison drama and feature debut by Uta Beria. Another critically praised debut, and Georgia’s 2020 submission for the Academy Awards, Dea Kulumbegashvili’s Beginning follows the wife of a Jehovah’s Witness preacher caught in a stifling, claustrophobic world of religious and patriarchal oppression. Levan Koguashvili’s Brighton 4th, a story of a Georgian father travelling to New York to help his debt-ridden émigré son, won the best international feature award at the 2021 Tribeca Film Festival.

Several recent documentaries, too, have created a buzz. Keko Cheidze’s 2021 Dead Souls’ Vacation is a look into addiction and mental health following the emotional struggles of a past-his-prime bass player.

All this marks a significant comeback for the Georgian cinematography, which has an illustrious, 115-year history but which hit creative doldrums amid the wars and economic collapse of the collapse of the Soviet Union. It was a herculean effort to make a film in the 1990s, a traumatic decade best depicted in the 2013 film In Bloom.

A coming-of-age-drama and a harbinger of Georgian cinema’s return, In Bloom was among the first movies that succeeded in telling Georgia’s story in a language relevant to both international and local audiences. It gained awards and critical acclaim abroad, while audiences at home shuddered as they watched the film’s hyper-realistic scenes of breadlines and gun-slinging in the Tbilisi of 1990s.

In 2000s, the Georgian government began offering tax breaks to international cinematographers while boosting funding for domestic filmmakers. The state-funded but autonomously operating Georgian National Film Center emerged as a major sponsor of film projects. “Having a system with a standardized procedure of funding, with professionally staffed review committee, helped put the film industry back on its feet,” Khatiashvili said.

While occasional gems ware made in that decade, it was the 2010s that marked the real comeback of Georgian film. Tinatin Gurchiani won Sundance Festival’s 2013 award for best director for The Machine Which Makes Everything Disappear, a collage of movie auditions that offered a sneak peek into the gloomy lives of an assortment of Georgian characters.

The same year, the annual documentary film festival CinéDOC-Tbilisi was launched. With screenings, masterclasses and pitching forums, the festival breathed a new life into documentary filmmaking in the country. Closer ties with the European Union and its cultural agencies also opened up new opportunities for filmmakers.

On the drama side, two Georgia-Abkhazia war-themed features, Tangerines and Corn Island, were shortlisted for the Oscars in 2015. Two years later, My Happy Family – made by the team behind In Bloom – focused on the inner struggles of a Georgian homemaker in a typical Tbilisi family and showed to positive reviews at Sundance and Berlin film festivals.

While Georgian film depicted an increasingly diverse set of themes, the country’s vibrant culture remained the leitmotif. Georgian-Swedish director Levan Akin’s 2019 feature And Then We Danced explored the taboo theme of gay love, set in the macho universe of traditional Georgian dance.

That film had a fate similar to that of the Taming the Garden: recognition internationally and controversy at home. And Then We Danced sparked outrage among religious conservatives. Viewers had to navigate heavy police cordons to attend the premiere in Tbilisi, while an angry crowd cursed and threw objects at moviegoers.

Now, as the stature of Georgian film continues to rise abroad, it is running into more and more obstacles at home.

Over the past year, the world of Georgian arts and culture has been plunged in turmoil as the new Minister of Culture, Tea Tsulukiani, has taken her mandate with an iron fist. A close Ivanishvili ally, she has been comprehensively reorganizing state cultural institutions, giving rise to accusations that she is trying to tighten government control over the arts by installing party loyalists.

When Tsulukiani appointed a pro-government commentator to the jury of a state-funded literary contest, many other members left the jury and scores of writers dropped out of the contest, citing attempts of state censorship. She then expelled from the Museum of Fine Arts a cadre of accomplished scientists and long-time curators, and installed loyalists in their places.

And just before Taming the Garden was supposed to have its ill-fated screenings at the Georgian Film Academy, Tsulukiani fired Gaga Chkheidze, the director of the state-run National Film Center, and appointed her deputy in his place. He is now under investigation for nepotism and embezzlement, charges he has said are politically motivated. His firing “was the logical conclusion, as my philosophy and style of work are diametrically different from Madam Tea’s approach,” Chkheidze said in one interview with Georgian media.

The Center had partially funded Jashi’s film, along with many of the other standouts of recent Georgian cinema, and she and other filmmakers see the investigation into Chkheidze as part of Tsulukiani’s campaign to subjugate the cultural world. (The Culture Ministry did not respond to Eurasianet’s request for an interview.)

Chkheidze said he believed that the cancelation of the documentary screenings had Tsulukiani’s fingerprints on it. “She found the message of the film unacceptable,” he said of Taming the Garden. Director Jashi agreed. “I had never experienced such a blatant case of censorship until Tsulukiani became the minister,” she told Eurasianet.

Meanwhile, the effort to keep people from seeing Taming the Garden has only backfired. The controversy has, Streisand effect-style, brought unprecedented interest in the film to Georgian audiences, including those with little appetite for documentaries. In the two months since the Film Academy screenings were cancelled, the film has been shown around the country at a variety of non-mainstream spaces, and always to a capacity crowd.

“Usually you see the same crowd at documentary screenings in Georgia,” Jashi said. “But now I have been seeing all sorts of people, of different walks of life and ages, coming to see the film.”