The Trump Meeting's Irakli Kaveladze: It All Started with Matryoshkas 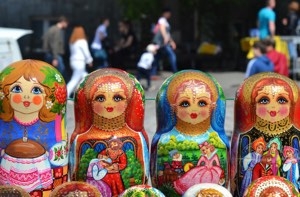 Donald Trump, Junior’s much-scrutinized “Russian” meeting has a broadening Caucasus dimension to it. Enter Irakli Kaveladze, a Georgian-born businessman who, US media outlets have reported, attended the Trump campaign’s sit-down with a high-profile Russian lawyer; a gathering that is being examined for possible ties to alleged Russian meddling in the 2016 US presidential election.

The middle-aged Kaveladze and Emin Agalarov, the 37-year-old pop singer who reportedly helped organize the meeting, were both born in the South Caucasus -- Georgia and Azerbaijan, respectively -- and both proceeded to have careers in Russia.

Kaveladze’s own role at the meeting with Russian lawyer Natalia Veselnitskaya remains unclear. (His lawyer stated that he expected to act as a translator, but another meeting participant has already identified another translator.)

Unlike Agalarov in Azerbaijan, Kaveladze does not appear to have a public profile in his native Georgia, which he reportedly left during the final years of the Soviet Union to study finance in Moscow. He stated that he began working for Emin Agalarov’s father, 61-year-old Aras Agalarov, in 1989.

How the two men met is also not clear.

Now an American citizen, Kaveladze’s first involvement with the US had to do with the classic nested Russian dolls, matryoshkas – an item that, in some ways, reflects the nature of the Trump-Russia scandal itself.

Back in 1988, the now billionaire Aras Agalarov set up a company in Moscow to manufacture the dolls and export them to the US. “I was hired [there] as a procurement agent of varnish,” Kaveladze reminisced last year in an interview with the Moscow-based radio Mediametrics. “I was travelling around in commuter trains carrying varnish . . . for those matryoshkas.”

Aras Agalov then set up what later grew into the real-estate development giant, Crocus Group. “We became the first private trade exhibition company in the Soviet Union,” Kaveladze said. “The Soviet Union was just opening up and Western companies were lining up [to participate in our exhibitions],” in his telling.

Kaveladze reportedly immigrated to the US in 1991 and states on LinkedIn  that he got his MBA from Connecticut’s University of New Haven. According to The New York Times, he had earlier helped Russians ship their fortunes and businesses to the US; an activity that brought Kaveladze to federal auditors’ attention in 2000. Their inquiry into potential money-laundering resulted in no charges against the businessman.

One Russian publication, Vedomosti, has reported, though, that the investigation perhaps cost Kaveladze his seat on the board of American platinum-and-palladium mining company Stillwater, which Russian mega-metal concern Norilsk Nickel had acquired in 2003.

Described as a “specialist in ‘international consulting,’” Kaveladze -- according to Vedomosti, a classmate of Norilsk Nickel’s then General Director Mikhail Prokhorov -- told the publication that he had withdrawn his candidacy “to first dot all the i’s . . . “ The company itself cited “personal reasons.”

All the while, though, Kaveladze allegedly maintained his Agalarov connection. He told Mediametrics that since 1989 he has never ceased to be in touch with the Agalarovs and their business in Russia. After his US stint, he re-joined their company in 2004, becoming the Crocus Group’s vice-president.

He told Mediametrics that Emin Agalarov’s singing talent has helped attract visitors to Crocus’ Moscow shopping centers , as he often performed there.

Emin Agalarov also performed at Miss Universe, when Donald Trump brought his beauty pageant to Russia in 2013 in partnership with the Crocus Group.

Completing the Caucasus connection are failed attempts to bring the Trump Towers to both Azerbaijan and Georgia. Agalarov and Kaveladze don’t appear to have had a role in these endeavors, however.