The U.S., learning lessons in Kyrgyzstan 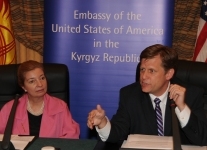 Reading through the transcript of the press conference during this week's visit by Michael McFaul (President Obama's director of Russian and Central Asian affairs at the National Security Council) to Kyrgyzstan, it's impossible not to get the sense that the U.S. is now on the defensive there. They were clearly stung by accusations that, in an effort to curry favor the previous government to keep access to the air base there, they had ignored human rights problems and blew off the opposition until the April 7 riots that resulted in the overthrow of the government. McFaul spent his entire opening statement refuting that notion. His words rang a bit false, given that pretty much every analyst, and members of the current government/former opposition, are pretty much in a consensus that those accusations were 100 percent correct.

The U.S. ambassador to Kyrgyzstan, Tatiana Gfoeller, chimed in to make the same point. And this is how she explains it:

On a personal note I would like to point out that all of the main opposition leaders have received numerous invitations to my home. I don’t know how many ambassadors you know personally, but I would have to confess that probably among ambassadors, I tend to be a very informal person. So I tend to like to invite people just over for a cup of tea to my residence to talk things over, or to a reception or do some kind of get-together in a very informal way.

In retrospect probably it would have been good for me personally to continue that practice which I’ve been doing with the opposition, but also to make more formal calls on them in their offices or wherever their place of business was. But I can assure you that now I’m definitely often in the offices of all of the members of the provisional government. In fact today I was there all day.

No one questions that she met with opposition members before; the complaint is that it wasn't enough and that the U.S. didn't take them seriously enough.

But more to the point, nowhere did she mention meeting with the current opposition -- she just emphasized how attentive she is to the former opposition, i.e. the current government. Which, after all, is exactly what got the U.S. in trouble in the first place. Doesn't inspire a lot of confidence that they learned from that mistake.