Even as Georgia’s Armenians and Azerbaijanis have strong feelings about the war next door, they are trying to maintain peaceful ties in the country they share. 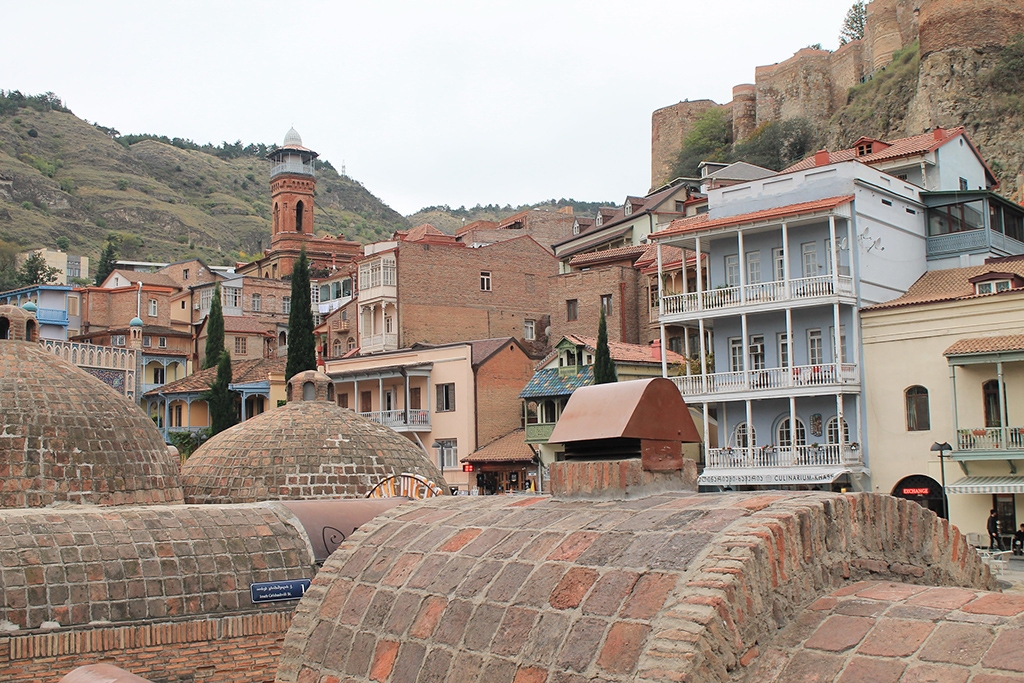 Tbilisi’s old town is home to many Armenians and Azerbaijanis. (photo: Robert Wilson/Flickr/CC)

These are tense days for Georgia’s Armenians and Azerbaijanis.

The two groups make up the largest minorities in the country and both have been riveted by the new war between Armenian and Azerbaijan, now entering its fourth week. But both communities say that the war to the south, no matter how bloody, should not spoil their longstanding peaceful relations in Georgia.

Scissors stopped snipping at a barber shop in Tbilisi’s old city, for centuries host to a rich mix of groups including Georgians, Armenians, and Azerbaijanis, when the conversation turned to the war.

“Butchers, that’s who they are,” snapped the barber, Armen, a Tbilisi Armenian, referring to the Azerbaijanis his co-ethnics are fighting for control of the territory in and around Nagorno-Karabakh, about 250 miles from the Georgian capital.

Armen railed against the Syrian mercenaries that Turkey is accused of sending to fight on the side of its ally, Azerbaijan. He pulled up the Facebook page of Armenian Prime Minister Nikol Pashinyan, who had posted videos of a battlefield strewn with bodies and the alleged Syrians calling Armenians “Christian pigs.”

“Come on now, Armen,” his Georgian colleague pleaded. She gestured with her eyes at the shop’s clients, who were indeed raptly watching his tirade.

“See, my people are dying every day but nobody cares, here or anywhere,” Armen snapped back. “Putin doesn’t care, Trump doesn’t care, she is my friend, but even she doesn’t care.”

But then the topic of conversation shifted to Azerbaijanis closer to home.

“Ah, you mean the Azerbaijanis here in Georgia?” Armen said in a quieter tone. He took a few moments to respond. “They are actually very good people,” he said, a bit incredulous at his own observation. “Don’t quote me on this, but I’d say they are much nicer than some Armenians here,” he added after some thought and with a tight smile.

Armen eventually asked that his last name or the name of the parlor not be used in the story – “everyone is acting crazy these days and I don’t want trouble” – but he was willing to continue on the topic of the Georgian Azerbaijanis.

“They live quietly in Marneuli, work hard,” he said, referring to the region in southwestern Georgia with the largest concentration of ethnic Azerbaijanis. “She and I went to see a fortune-teller there once,” he added, pointing at the Georgian hairdresser, who nodded affirmatively. “We bought some vegetables at the market. I’m clearly an Armenian,” he added, pointing at his face, “but nobody cared.”

Azerbaijanis in Georgia are similarly passionate about the war, keeping count of the growing death toll and watching in shock as videos circulate of brutalities committed against their ethnic kin. But, like Armen, Georgian Azerbaijanis who spoke with Eurasianet also were careful not to direct their anger at the Armenians that they share a country with.

“It makes little sense for us to argue about the war,” said Tofig Bairamov, a handyman from a majority-Azerbaijani village of Mskhaldidi, who partners up with an Armenian from a nearby village to run a small home-repair business. The pair doesn’t see eye-to-eye on the matter of Nagorno-Karabakh, but Bairamov says it doesn’t get in the way of their working relationship.

“He will never admit it, but Armenia is in the wrong on Karabakh and to end this war [the territory] has to go back to Azerbaijan, period,” Bairamov said. “But governments start and end wars, so why should we argue about it?”

“It is disappointing, heartbreaking to see some Georgian-Armenians, people you know and even worked with, openly take sides and share anti-Azerbaijani posts on social media,” said Kamran Mammadli, a Georgian-Azerbaijani minority rights activist. “But at least there have been no instances of direct confrontations, not to my knowledge.”

Yana Israelyan, a Tbilisi-based journalist of Armenian descent, said she had not seen much tension on social networks between Georgian Armenians and Azerbaijanis. “When you read Georgian-Azerbaijanis’ posts about this, you just opt not to engage, because you know that everyone will stick to their guns anyway,” she said.

“Armenians understand that local Azerbaijanis support Baku in the Karabakh conflict and, on the other hand, everyone knows where the loyalties of the local Armenians lie,” she went on. “But everyone also understands that the war will end and we will still have to live together here.”

Even if the relationship is not always chummy, the peaceful coexistence of Armenians and Azerbaijanis in Georgia offers a glimmer of hope for a region riven with ethnic conflict and boasting one of the world’s largest concentrations of territorial disputes per square mile.

Georgia has long served as proof that trade interests and human contact can trump mutual grudges and the notion of “ancient hatred” cultivated by state propagandists in Armenia and Azerbaijan. The two peoples that former Armenian President Robert Kocharyan once notoriously described as “ethnically incompatible” mixed and mingled in Tbilisi for centuries. They live together in a handful of Georgian villages and also as separate communities in two regions, Azerbaijanis in Marneuli and Armenians in Samtskhe-Javakheti.

Which is not to say that the environment in Georgia has not been fraught. Following the outbreak of the war, Georgia’s minorities have been actively rooting for their respective sides in the conflict. They have been sending aid to the frontlines and some even have volunteered to fight. Solidarity rallies have been held in Marneuli and Samtskhe-Javakheti.

“For every Armenian in Georgia, the morning begins with checking the news from Karabakh,” Israelyan said. “But Armenians living in Tbilisi and Armenians in Samtskhe-Javakheti see the conflict a bit differently. Maybe this is because Armenians in Samtskhe-Javakheti live together as a community, while in Tbilisi it is more mixed and there are closer contacts with people of other ethnic groups.”

Part of the reason rural minorities tend to be more involved, emotionally or otherwise, in the neighboring countries’ war is that successive Georgian governments have consistently failed to meaningfully integrate non-Georgians into the country’s fabric, Mammadli, the rights activist, argued.

“The center does not care much for minority regions,” he said. “There is a lot of poverty and estrangement in these regions. They feel neglected by the rest of Georgia and therefore feel affinity with the neighboring countries.”

As minorities, Armenians and Azerbaijanis actually have more that unites them than divides them, Mammadli argued. “We both face stereotypes here and are often treated as second-rate citizens, as we don’t fit into the notion of a Georgian as it is defined by the mainstream,” he said. “So we have a common cause to assert ourselves as Georgian citizens, gain better access to education, jobs, healthcare, political life, to be seen as Georgians even if we are not Georgians by blood.”

While the Armenian-Azerbaijani modus vivendi in Georgia can potentially serve as a moderating influence, there are many pitfalls, as well. No country in the South Caucasus is happy with the shape and size of the territory that history has assigned to them, and Georgia also has plenty of issues with its two neighbors.

Aside from losing control of the Russian-backed breakaway territories of Abkhazia and South Ossetia, Georgia also has locked horns with Azerbaijan over an ancient monastery complex that straddles a still-undefined stretch of the two countries’ border. Georgians also harbor fears of potential Armenian irredentism in Samtskhe-Javakheti.

On the government level, Tbilisi, Yerevan and Baku maintain restraint on these fronts. Ordinary Georgians, however, can be prone to knee-jerk reactions to disputes on the monastery complex with Azerbaijan or to the faintest hint of Armenian separatism in Samtskhe-Javakheti.

When Armenian Prime Minister Nikol Pashinyan recently posted a photo of a rally in Samtskhe-Javakheti in support of Armenia, it prompted a minor furor in Georgian social networks. The photo was captioned “Javakh,” the Armenian term for the region, which to many Georgians sounded like a territorial claim.

Armenians joined the fray online to argue that the picture was merely intended to be one example of the solidarity being expressed by Armenian diasporas around the world, but it still resulted in some unsavory exchanges between Georgians and Armenians. Pashinyan’s Facebook account later changed the photo caption to “Javakheti.”

Some Armenians, for their part, have been aggrieved by Georgia’s hesitation to let aid shipments that local Armenians had gathered cross the border into Armenia. A few posted profanity-laced videos online and called for boycotting Georgia’s summer resorts, leading to more high-pitched exchanges with Georgians.

Two Georgian cartographers have been arrested on charges of treason, accused of deliberately allowing part of the disputed monastery territory slip into Azerbaijan’s control under the previous ruling regime. The case, launched just weeks before parliamentary elections, seems suspiciously timed to discredit the former ruling party – now the main opposition – ahead of that vote. But it also seems a tone-deaf diplomatic move at a time of heightened regional tension.

Georgia maintains a careful neutrality in the Armenian-Azerbaijani conflict, and both sides keenly watch for any deviation. A faux pas could open up sources of tension in a region where complicated history has left every group feeling that every other group has wronged them somewhere along the line.

Back at the salon, one inauspicious comment by the Georgian hairdresser triggered an outpouring of mutual grievances.

“For the life of me, I don’t get why you are killing each other over Karabakh,” the hairdresser told her Armenian colleague, Armen. “I looked up photos and there is nothing there. It is nothing like Abkhazia.”

Armen erupted. “So because you had a home in Abkhazia, had your palm trees and tangerines there, you support Azerbaijan and don’t care that my brothers and sisters are dying,” he said.

The Georgian took offense. “I don’t support anyone,” she said. “And yes, I’m from Abkhazia and I know what it is like to be kicked out from your home. So yes, I understand when people want to go back to their homes.”

Soon the two were working their way through a lengthy list of old talking points: Georgians’ annoyance with Armenians’ preoccupation with the once extensive kingdom of Great Armenia, Georgian fears of cultural expropriation by Armenia, and the centuries-old Armenian churches in Tbilisi that Georgia would prefer to see reduced to ruin rather than be handed over to the Armenian Church.

When Armen finished the haircut, he offered an olive branch, of sorts.

“When you meet Azerbaijanis, tell them they are free to come and get a haircut here,” he said. “So long as they don’t mention Karabakh and the war.”