Social media platforms make it far simpler for the public to keep officials informed about their gripes. 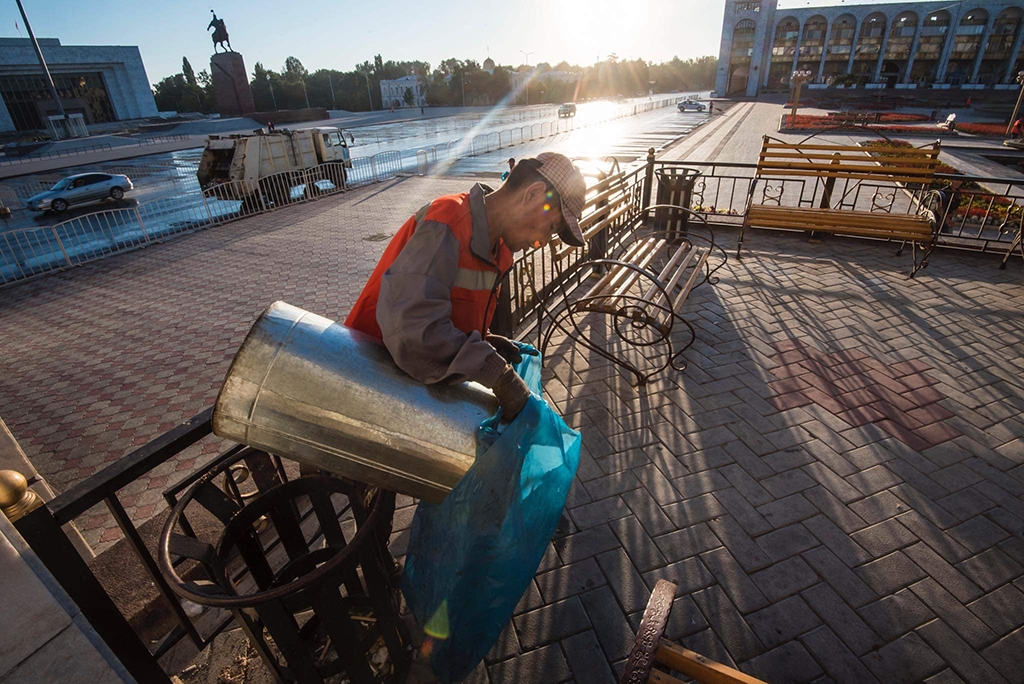 In a neighborhood in southwest Bishkek, a crew of garbage collectors do their rounds in the evening.

One person sticks out in the gang of guys in scruffy athletic pants and orange high-vis vests – the young woman wearing pink sunglasses and shorts and with her long hair wrapped in a pink bandana.

This is Zhibek Karakeyeva, the 25-year-old press secretary for Tazalyk, the municipal service responsible for clearing trash and ensuring cleanliness in Kyrgyzstan’s capital.

Karakeyeva is at the vanguard of a new generation of press people at Bishkek city hall.

Instead of sitting at her desk from morning till evening, Karakeyeva likes to go out with her colleagues into the field, helping them do their work and understanding better what the job entails. She sweeps streets, picks up garbage, washes dumpsters, sometimes heads out to the landfill. And the whole time this is happening, she films and takes photos.

"I started to run the Tazalyk Facebook page as my diary. I did not want to write about all kinds of bureaucratic stuff that nobody wants to read. When you write simply and explain things as though you were talking to a neighbor or friend, it is so much better,” she told Eurasianet.

When Karakeyeva took on the job as Tazalyk spokeswoman three years ago, she and her boss were the only two people signed up to the service’s Facebook feed. That number has swelled to 5,000.

The success of this initiative is that the public feels listened-to and involved in what is going on in their own city.

“What we got at first was a lot of criticism. Then we began to post photos documenting how we were tackling their problems and reaching out to residents. Now we get a lot of praise. People have begun to appreciate our work and litter less,” Karakeyeva said.

The appeal of social media platforms and messaging apps is that they make it far simpler for the public to keep officials informed about their gripes.

Facebook and the Bishkek Segodnya (Bishkek Today) Telegram channel have become perhaps the most popular ways to flag problems, be it trash, rickety road signs or sagging power lines. Tagging press secretaries into messages is usually a good way to ensure a prompt response.

“I remember when there were just 13 people in the Bishkek Today channel. Now there’s 3,500 of them, photographing every bush. This has become a resource for solving the city’s problems,” Karakeyeva said.

Karakeyeva’s own Facebook profile has about 5,000 subscribers. She admits that to begin with, she was embarrassed to write about how she works with garbage collectors. But now she talks with pride about what she does. She has got used to the smell of trash and is not too prissy about handling it either.

“When I get home, my mom says: ‘Wash the floor.’ And I tell her: ‘I don’t want to. I have already cleaned all of Bokonbayev Street,’” she laughed.

Karakeyeva’s profile is such that she gets messages about all kinds of city services, not just the one that she works for.

One time, Bishkek resident Oksana Bezborodova wrote a message to complain about how a car had driven at great speed into a lamppost.

“The lamppost, which was held up only by the wires, could have collapsed onto the thoroughfare at any moment. The person who came to mind was our one-woman 911 – Zhibek Karakeyeva. I called her and asked for assistance. Help arrived fast. Thank you!” wrote Bezborodova.

Another case was the new trash cans that were installed in Bishkek’s downtown. When people took to social media to criticize their appearance, Tazalyk redesigned them in less than a week.

The feedback mechanism has not historically worked, of course. In 2017, there was much protesting when then-Mayor Albek Ibraimov pursued his plan to hack down large numbers of trees as part of a road-widening campaign. The grumbling was for nothing.

In addition to Tazalyk, Bishkek city hall has another 15 departments responsible for keeping all kinds of services ticking along – from elevators in apartment blocks to the burial of the dead. More often than not, this work goes largely unnoticed.

Zhusup Jeenbayev worked for more than 20 years as an electrician in municipal services. Today, he heads up a crew at Bishkeksvet, which is responsible for street lighting.

Over the past year, Bishkeksvet press secretary Erkeayim Begaliyeva has, like her counterpart over at Tazalyk, taken to the streets, where she climbs up in the cranes and documents what her colleagues are doing.

“She often comes and takes photos of how we work. Before her, we had no such people,” Jeenbayev said. “It is good that young people are working and think about our future.”

The criticism may still roll in, but at least people now understand what the job involves, he said.

“The guys understand that their work is being appreciated. Before, if they made an effort or they didn’t, it made no difference,” said Jeenbayev.

Traditionally, spokesperson jobs have been strictly nine-to-five affairs. But this new approach requires a little more.

When the end of year approaches, one of Bishkeksvet’s jobs is to hang up festive lighting. So, when that happened in December, Begaliyeva was out at night, when the lights are put up, to take photos of how it was all being done.

“When we were decorating the city for the New Year holidays, I would get home at three, four in the morning. Despite the fact that I would be online until four in the morning, I would still go to work at eight. You cannot even imagine what it feels like on a day when you can help even just three people. And it is such a buzz, especially when you get thanked,” she said.

Not that any of this has silenced Bishkek city hall’s critics though.

And yet even those like Almir Almambetov, a journalist, who says he would like to see the city do better, acknowledge that the press secretaries have done formidable work salvaging the reputation of Bishkek’s government.

“The press secretaries are fabulous. They react quickly and solve problems. It is good that they also show the work of municipal services. Before, nobody in the city knew about all this,” he said.

Municipal service press secretary jobs pay, on average, between $150 and $200 a month.

That scant pay makes the job especially exhausting. Karakeyeva has to do extra jobs to pay the bills. And she says that it is discouraging that civic service is still perceived as an older person’s job.

“If there were more young people, there would be a different way of thinking. But young people seldom want these kinds of jobs,” she said. “I get that if you have smarts you want to go and study in London rather than work as a clerk in the Bishkek water utilities service.”

“But for the time being, we are doing everything possible to make sure that our beloved city becomes a better place.”