The new agreement was brokered in Washington, where the conflict has been increasingly occupying senior officials, including President Trump. 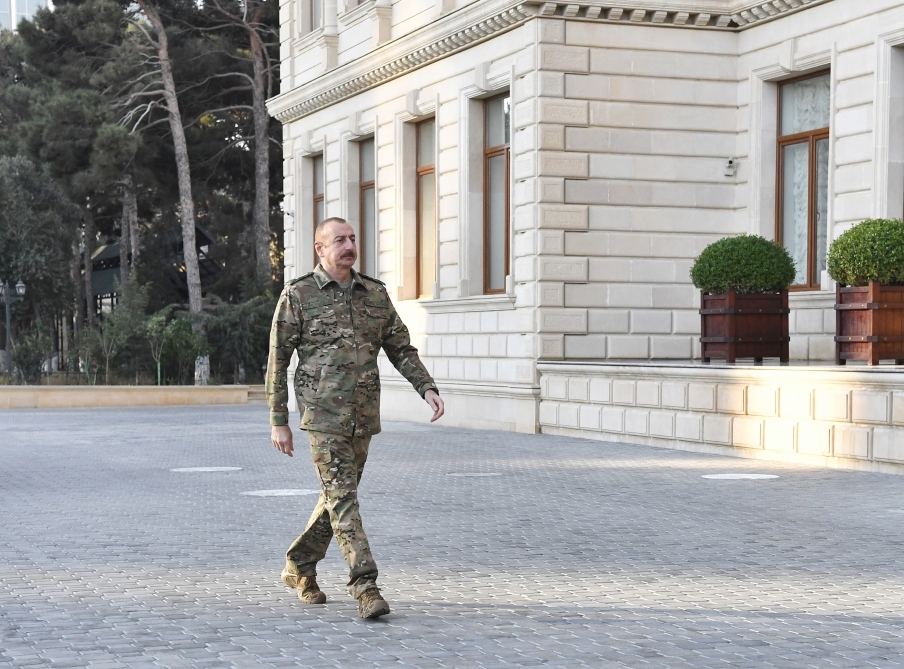 Azerbaijan President Ilham Aliyev on his way to deliver a speech on October 25. (photo: president.az)

Armenia and Azerbaijan have agreed on a third ceasefire in as many weeks, and given the failure of the first two to stop the fighting hopes were slim that this one would have much of an effect, either.

The new ceasefire was agreed on October 25 under the mediation of the United States, where the foreign ministers of both warring countries have been meeting with Secretary of State Mike Pompeo and other American officials, as well as with one another.

With some exceptions, though, the violence does seem to have moved away from more populated areas following the first signing of the ceasefire. The fighting is now concentrated in the mostly empty territories surrounding Nagorno-Karabakh that have been occupied by Armenian forces for more than a quarter century but which are increasingly coming under Azerbaijani control.

The fighting is by far the bloodiest since the two sides fought a war in the 1990s. The Armenian side has reported more than 900 killed in action, while the Azerbaijanis have not been releasing military casualty numbers. Russian President Vladimir Putin said on October 22 that “more than 2,000” on each side had been killed.

Within minutes after the ceasefire was to go into effect – at 8 a.m. in the Caucasus on October 26 – both sides were already accusing one another of breaking it. Azerbaijan’s Defense Ministry tweeted at 8:03 am that Armenia had already violated the ceasefire, then deleted the tweet and issued a new one saying that the violations started at 8:05.

As was the case when the previous ceasefires were signed, Azerbaijan has evinced little interest in stopping the fighting while it is making progress.

Hours before the agreement was announced in Washington, Azerbaijan President Ilham Aliyev gave yet another fiery speech in which he promised the full restoration of Azerbaijani control over its territory, and in fact called on the military to speed up its operations. Later, he announced the recapture of Gubadli, the former capital of the district of the same name.

And immediately after the ceasefire was announced, the news website Haqqin – often used to send signals of what the government is thinking – poured cold water on the agreement.

"The unexpected interference by the State Department in no way darkened the festive mood of Azerbaijani society" following new announcements of territorial gain, its editor-in-chief, Eynulla Fatullayev, wrote. Fatullayev further accused the State Department of “distorting” the nature of the agreement, presenting it as if it were something more than a temporary pause in fighting.

More than 10 hours after the ceasefire was announced, the state news agency Azertag did not have anything about it on its website’s front page. The only story on the agreement was buried under the headline “The OSCE Minsk Group co-chairs issued a statement.”

There are “many reasons to doubt it [the ceasefire] will hold,” wrote Laurence Broers, Caucasus program director at Conciliation Resources, on Twitter. “Three tests of ceasefire viability are: 1) have military goals been achieved? 2) has the cost of carrying on become prohibitive? 3) do 3rd parties have leverage to enforce? None of these conditions appears to hold.”

Azerbaijan’s military goals appear now to be the retaking of all of its territory, “or perhaps advantageous enough position to achieve this within months if winter forces a timeout,” Broers added. He noted that Aliyev’s demand to speed up operations could also suggest a “perception that there’s a window in which to do so.”

Nevertheless, diplomacy is continuing. The two foreign ministers agreed to meet on October 29 in Geneva along with the co-chairs of the Organization of Security and Cooperation in Europe’s Minsk Group, the U.S.-, France-, and Russia-led body mediating the talks.

The Minsk Group issued a statement, on behalf of the co-chairs and the foreign ministers of Armenia and Azerbaijan, saying that the agenda in Geneva would include not only the “immediate humanitarian ceasefire” but also “core substantive elements of a comprehensive solution. … in accordance with the basic principles accepted by the leaders of Azerbaijan and Armenia.”

Hopes for substantive talks may be optimistic, given the rapidly developing situation on the ground.

But the Minsk Group’s optimism had nothing on that of U.S. President Donald Trump.

Earlier on October 25, he talked about the conflict at a campaign rally in New Hampshire, prompted by seeing some fans with Armenian flags.

"Armenia. You know Armenia? We're working on that, you know, we're working. We did it with Kosovo and Serbia, do you believe I got three nominations for the Nobel Peace Prize, can you believe it?" he said. "Armenia, this relates to Serbia, we had Serbia-Kosovo, we had this deal and I said wait a minute these people are killing themselves, they've been killing each other for years and years and decades and we're dealing with them unrelated," Trump said.

“The problems they've had, with the death and the fighting, we're going to get that straightened out. That's going to be, I call that an easy one.”

Trump had come under fire from many Armenian-Americans as well as Joe Biden, his challenger in the upcoming election, for the U.S.’s lack of engagement in the conflict.

In the last week or so, however, U.S. officials have been talking more and more about the conflict.

On October 15, Pompeo addressed the conflict in a manner that turned off both sides, appearing to favor the Armenian side while suggesting the U.S. would do nothing to help them. “We're hopeful that the Armenians will be able to defend against what the Azerbaijanis are doing,” he said. “We now have the Turks, who have stepped in and provided resources to Azerbaijan, increasing the risk, increasing the firepower that's taking place in this historic fight."

A few days later, though, the U.S.’s ambassador to NATO, Kay Bailey Hutchison, framed the conflict in an Azerbaijan-friendly way, focusing on keeping the current international borders. The core of the conflict, she said, was “where are the sovereign boundaries of Azerbaijan and what can accommodate the Armenian population within those boundaries? That can be settled, and then this conflict would end.”

And in recent days Trump himself has spoken about the conflict multiple times at campaign rallies, in which he invariably praises Armenians and doesn’t even refer to Azerbaijan. Whether that is a nod to a large Armenian-American voting population, or a simple language issue, is unclear.