The protest's organizers vowed to continue through the weekend. 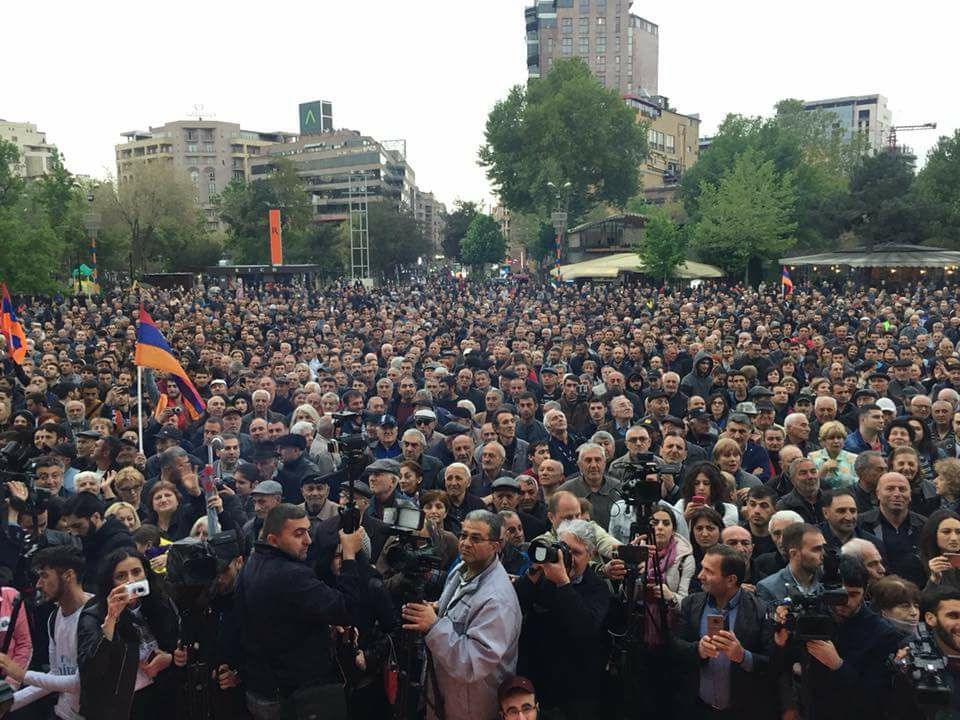 Armenians took to the streets on the evening of April 13 to protest former president Serzh Sargsyan’s prolonged rule. Thousands held a demonstration and then shut down Yerevan's central France Square, blocking one of the city's busiest intersections.

Friday's rally marked the first stage of what is planned to be a four-day protest launched to prevent Sargsyan from sliding into the Prime Minister’s office. It was organized by the Civil Contract party together with non-parliamentary groups like For the Name of Armenia and Reject Serzh.

Taking the lead was Nikol Pashinyan, a National Assembly MP with the Yelk bloc, supported by the youth movement “Reject Serzh.” Pashinyan had failed to unite the Yelk bloc and fellow opposition members behind the protests, but himself undertook a 14-day protest walk from the second city of Gyumri to Yerevan, which he dubbed Իմ Քայլը (“My Step”). Friday's rally was the culmination of that march.

The protest was joined April 11 by fellow Yelk MPs Ararat Mirzoyan and Lena Nazaryan, who took to the floor of the National Assembly to call on citizens to protest Sargsyan's nomination and lit colored flares inside the chamber.

The demonstration in Yerevan began around 6:30 pm, as thousands of protesters gathered in downtown Yerevan's Freedom Square. Leaders warmed up the crowd with a “Make a step, reject Serzh!” chant, uniting the slogans of both Pashinyan’s supporters and the youth protesters.

In an hour-long speech, Pashinyan described Sargsyan’s years in power as “mafia rule.” He called on the opposition to stop Sargsyan – until April 9, the country's president – from becoming prime minister, thus effectively continuing his rule.

Under a new constitution, Armenia's PM is now elected by the parliamentary majority and, in theory, can hold the office indefinitely. The same day he stepped down as president, the ruling Republican Party announced Sargsyan as its nominee for the office.

Pashinyan called for protesters to take on a “non-violent struggle,” asking them to stay on the streets and shut down the city. “We will blockade everything that is possible to blockade,” he said. In particular, he called on protesters to block the Republican Party headquarters on April 14 when its members are expected to formally nominate Sargsyan; and April 16 when parliament is scheduled to take a vote.

Pashinyan also warned against clashing with law enforcement, saying there were “no enemies among the police,” and promised his supporters “won’t harm [policemen] either physically or verbally.” He argued that if the crowds of protesters were large enough, the police would not use force to disperse them. Thus far, his assurances have proved correct.

Three of Armenia’s biggest TV channels — state-owned Public TV as well as private networks Armenia and Shant — chose to either not cover the opposition’s actions at all or cover them briefly without mentioning their agenda, according to an analysis by the Union of Informed Citizens, a Yerevan-based watchdog group.

Finishing his speech, Pashninyan perhaps knew who he was about to see next: Valery Osipyan, a deputy head of the Yerevan Police with a long and controversial record of handling mass protests, arrived and ordering Pashninyan to leave the square. Pashinyan went on without letting the officer finish, followed by supporters’ chants “Forward! Forward!”

Shouting into a megaphone, Pashinyan said “starting today, nobody’s going home.” The protesters then moved into the France Square, a major intersection less than a mile from the presidential palace. They used benches to block the traffic on the four streets forming the junction, including Mashtots Avenue, the capital’s widest road.

Another mass rally was scheduled for the afternoon of April 14.