The protests are turning into one of the biggest crises yet in Serzh Sargsyan's ten years in power. 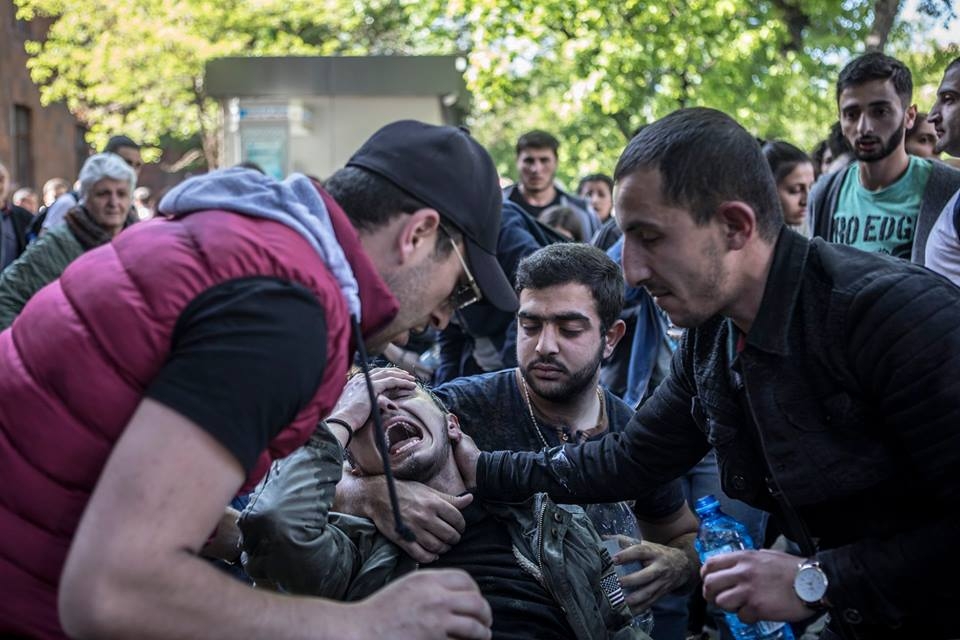 Protesters in Yerevan after clashes with the police on April 16. (photo: Eric Grigorian)

Protests in Armenia continued for a fourth straight day on April 16, growing to an estimated 10,000 people and effectively shutting down Yerevan’s downtown. The protesters also disrupted metro operations and stormed university campuses.

The protests also saw their first violence, with several clashes between police and protesters. As a result, 46 people, including six police officers, were injured, Armenia’s Health Ministry reported.

The growing protests are aimed at preventing Serzh Sargsyan from assuming the position of prime minister. He resigned as president a week earlier and, under a new constitution that makes the prime minister the country's most powerful figure, is set to extend his unpopular rule indefinitely.

It remains unclear what effect the protests will have on Sargsyan's rule, but they have already grown far larger than most observers expected, creating one of the biggest crises in his ten years in power.

The protests appeared to be dispersed widely throughout Yerevan's downtown, expanding from their center around France Square. Crowds, led by protest leader and MP Nikol Pashinyan, stormed the downtown campuses of Yerevan Basic Medical College and Pedagogical University.

Protesters also shut down Baghramyan Avenue, blocking the National Assembly, where members are scheduled to elect Sargsyan as prime minister on April 17.

Throughout the day, Pashinyan kept stressing that “the police are our brothers” and repeatedly apologized to policemen for the inconvenience caused by the demonstrations and called on protesters not to attack police, verbally or otherwise. Many followed his lead by offering police officers tulips.

For a time, the tactic worked and thousands of protesters were able to easily pass through police cordons.

But the tension ultimately snapped when, in the afternoon, Sargsyan gave his first public reaction to the nomination by his party, the ruling Republican Party of Armenia. “I'm ready to take on this responsibility,” he said in an interview with the Russian newspaper Izvestiya. That was soon followed by the news that the Republicans and their partners, ARF Dashnaksutyun, unanimously ruled to formally introduce Sargsyan as their coalition's nominee for the PM’s office.

Reacting to the news, the crowd led by Pashinyan tried to storm the National Assembly building. Police blocked their way with barbed wire and used batons, as well as stun and sound grenades, to disperse the protesters. Pashinyan was injured in the fracas and taken to hospital. He later said his injuries came from cutting his hands on barbed wire and a stun grenade explosion, and not from police batons.

Returning to the protest scene, Pashinyan was greated by his fellow MPs from his bloc in parliament, Yelk. Pashinyan gained another prominent ally on Monday in radical opposition leader Jirayr Sefilian, who publicly endorsed the protests from his jail cell.

One of the day’s most dramatic episodes took place on Koryun Street, where students disrupting traffic were attacked by a group of men in black clothes who arrived on the scene in a black Mercedes SUV and a white Toyota sedan. After giving a brutal beating to a number of protesters, the unidentified men got back into their cars and drove away. Despite the heavy police presence, officers made no attempt to arrest the attackers.

RFE/RL’s Armenian service recorded the incident, and while the attackers have yet to be identified, their vehicle, style of dress and violent behavior suggests a connection to organized crime or the country’s oligarchs (the two are often interlinked).

In an attempt to put a stop to the clashes, Pashinyan ultimately reached an agreement with Yerevan’s deputy police chief Valery Osipyan: as the protesters retreated a few steps back from the barbed wire, the police promised to not use force.

Standing in front of the barbed wire with a black eye, his right hand bandaged, Pashinyan urged the protesters to keep control of Baghramyan Avenue overnight and begin blockading all the streets leading to the National Assembly building.

“We have to close those streets with anything we can get hold of,” he told the supporters that again gathered in France Square. “We need the whole country to take to the streets tomorrow.”