Azerbaijan is supposed to be the richest country in the region. So why is it asking for donations to help it deal with the coronavirus outbreak? 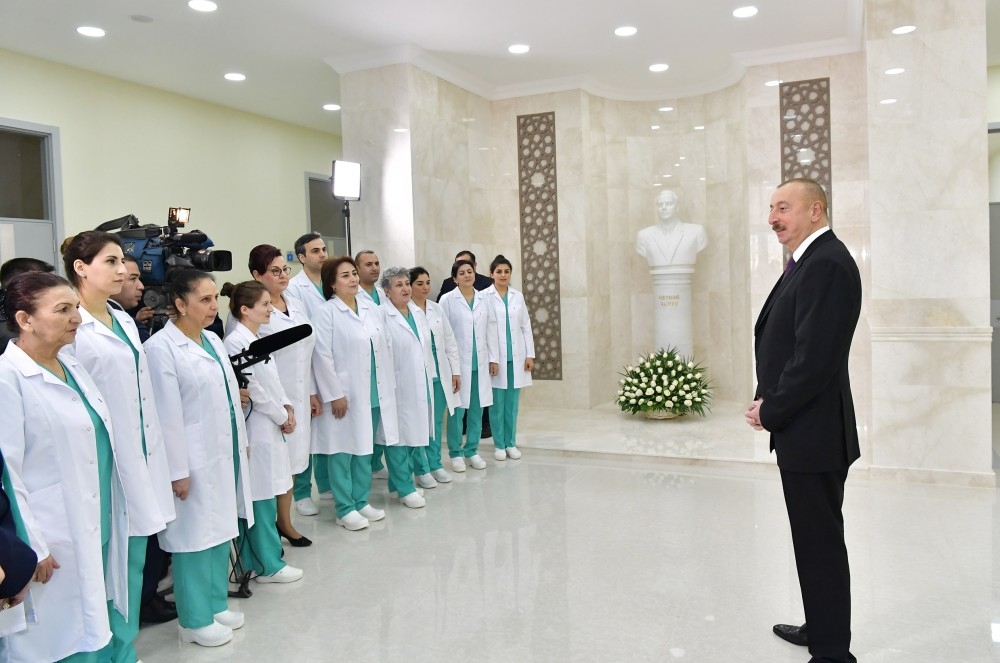 Earlier this month, Azerbaijan’s government announced that it was donating $5 million each to Iran and the World Health Organization to help fight the coronavirus outbreak.

Now, the government itself is asking for donations from citizens, organizations, and businesses to help it deal with the disease in Azerbaijan.

President Ilham Aliyev announced the creation of the fund on March 19, and its first contributions were from the government (20 million manats, or about $12 million) and from his own personal yearly salary. Soon to follow with pledges were Aliyev’s wife and first vice president, Mehriban Aliyeva, and a host of organizations and businesses.

The State Security Service is donating 800,000 manats. Day.az and the Trend News Agency each donated 50,000 manats. Pasha Holding, the business giant controlled by Aliyeva’s family, donated 3 million Euros and 2 million manats. Every government ministry, bank, and cell phone company, has chipped in. The donations have been exhaustively covered in the Azerbaijani media; the news site Haqqin alone has carried (by Eurasianet’s count) 96 separate stories about donations to the fund.

As of March 25, the fund had collected about 80 million manats, its official site reported.

The existence of the fund has raised many questions, the most fundamental of which is: Why is Azerbaijan’s government, which has the largest state budget of any country in the Caucasus, the only one passing the hat like this?

Ibrahim Mammadov, the spokesperson for the Cabinet of Ministers, who has been designated the government’s point man on coronavirus matters, did not respond to a request for comment from Eurasianet.

It’s not clear how much money the fund will be able to collect, but the amount accumulated so far will barely make a dent in the 1 billion manat bailout package that Aliyev rolled out the same day that the fund was created. (Moreover, many of the businesses that have been donating to the fund would presumably be the intended beneficiaries of the bailout.)

Aliyev’s own comments suggest that the point of the fund is not so much to combat coronavirus as to inculcate a sense of national belonging.

“The basic goal of the fund’s creation is for every person to demonstrate, within the limits of their capability, their civil solidarity, to yet again demonstrate the solidarity and generosity that is one of the foundations of our society,” he said during a March 24 television interview. “For us to show ourselves and the entire world that we are a great people.”

Others believe the government may actually need the money, given the recent drop in oil prices against the background of an already struggling economy.

“The money being raised has nothing to do with the coronavirus – the price of oil is falling, and this is one of the steps being taken to get out of the situation, something like a drowning man clinging to a straw,” wrote Altay Goyushev, a Berlin-based Azerbaijani analyst, on his Facebook page. “Governments all over the world are helping their people and, as usual in Azerbaijan, the people are helping the government.”

Hebib Muntezir, a journalist for the Berlin-based Azerbaijani network Meydan TV, reported that civil servants, teachers, and others “are being forced to donate their salaries to the coronavirus fund … Ilham Aliyev proudly says that other countries are learning from us. Never mind other countries – the virus itself is shocked by what he is doing.”

While the money-raising efforts have been well documented, Azerbaijan’s fight against the COVID-19 outbreak itself has been less visible. The country has tended to be a step behind its neighbors: it was the last country neighboring Iran to close its border following a large outbreak in that country, and also closed schools and other institutions later than its neighbors. The first cases of the disease in both Georgia and Belarus were people who had traveled – with the disease undetected – via Azerbaijan. Cases of the disease in Russia, Israel, and Kuwait also were detected among people who had recently traveled from Azerbaijan.

In spite of all that the disease has spread – officially, at least – relatively slowly in Azerbaijan. As of March 25, there were 76 active cases of COVID-19 in Azerbaijan; one person has died of the disease and 10 have recovered.

One source in Baku, speaking on condition of anonymity, said that there is widespread skepticism about the official numbers. The source also noted, however, that Azerbaijan’s close-knit society and social media would make it impossible to hide deaths from the disease. “So, we would be hearing about it if there were more people dying,” the source told Eurasianet.

Azerbaijan’s government has been aggressive, at least, in taking advantage of the crisis to attack its political opposition. In a March 19 speech, Aliyev openly threatened opposition figures, calling them a “fifth column” that was taking advantage of coronavirus to sow panic. He warned that they may have to be “isolated” as a result.

It didn’t take long before the authorities acted on those warnings. One prominent opposition figure, Tofig Yagublu, was arrested days later on what Human Rights Watch called “spurious hooliganism charges,” which the organization tied to Aliyev’s coronavirus threat.

Ali Karimli, the leader of the Popular Front Party of Azerbaijan, reported that two other opposition figures were detained on coronavirus-related pretexts.