The resignation is the highest-profile departure to date for the new government. A spokesman for the prime minister insinuated that the official might have been under the influence of the former regime. 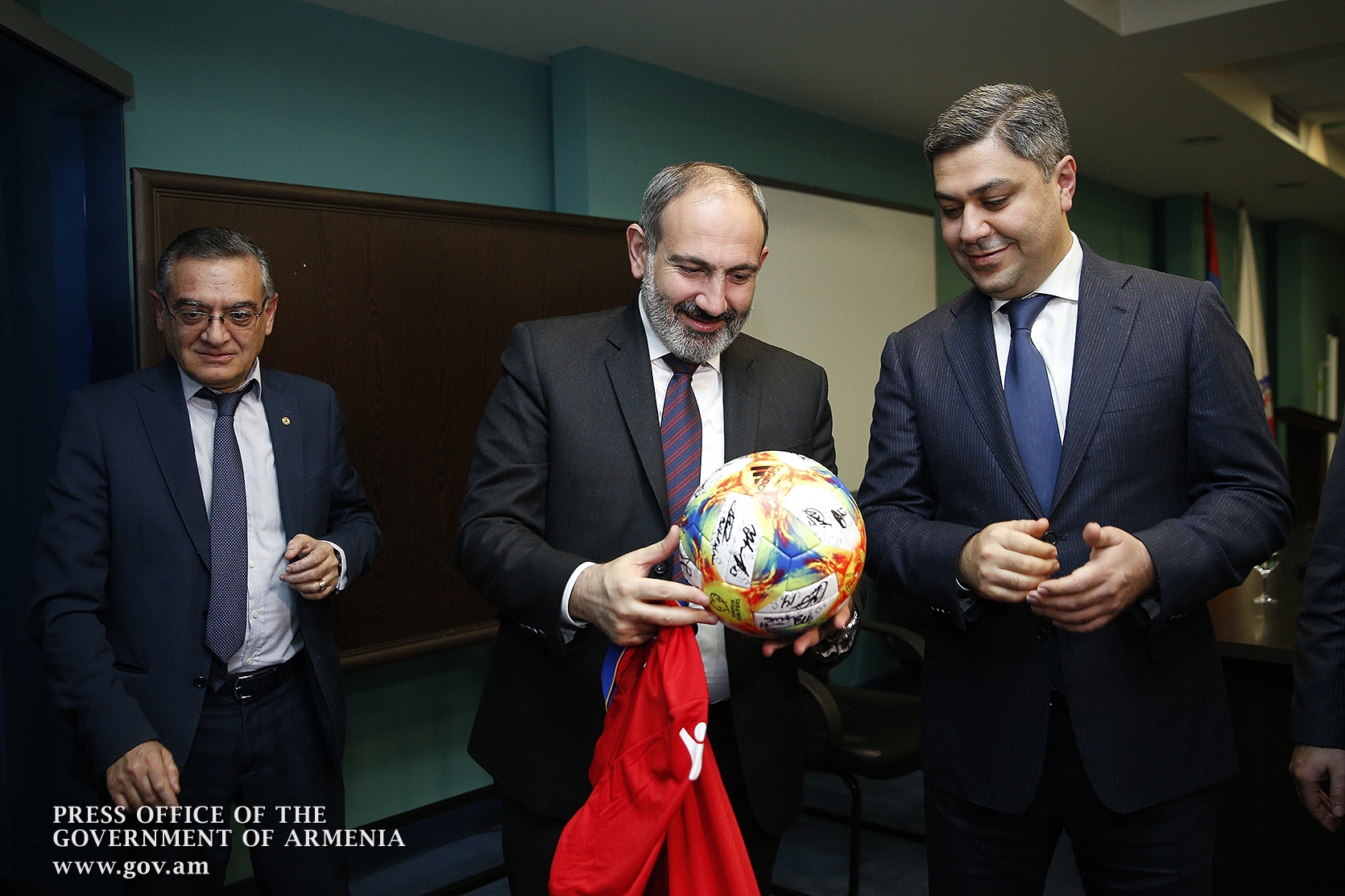 Prime Minister Nikol Pashinyan, center, and Artur Vanetsyan, right. Vanetsyan was head of the National Security Service until his surprise resignation on September 16; he remains head of the national soccer federation. (photo: primeminister.am)

The head of Armenia’s National Security Service, who has led high-profile investigations into former president Robert Kocharyan and other former high-level officials, has resigned.

The resignation was the highest-level leadership shakeup since the government led by Prime Minister Nikol Pashinyan took power last spring. And while Pashinyan suggested the decision to leave was amicable, a spokesman later suggested that the hand of the former government may be involved.

The NSS head, Artur Vanetsyan, became a well-known figure for his accessibility to the press and his aggressive statements against oligarchs connected with the former leadership. NSS became a sort of brand, with caps and t-shirts being made with the agency’s logo.

Announcing his resignation, he made a vague statement that nevertheless indicated that he had differences with Pashinyan.

“Let my resignation be a sobering ‘Stop’ step,” Vanetsyan said. “State-building has its logic: spontaneity of actions and decisions and a work style of not differentiating between primary and secondary and transient and lasting things is not the path leading to the realization of goals. It has nothing in common with the officer’s honor: the officer’s epaulettes are incompatible with such a course of events.”

Vanetsyan is a career NSS officer and was appointed head of the agency just after Pashinyan took office, on May 10, 2018. The following September he took on an additional job: head of the soccer federation, replacing a prominent, deeply hated oligarch.

In a press conference, Pashinyan said the decision was mutual and that Vanetsyan would continue to hold his second job.

“Artur Vanetsyan will continue the important mission of the chairman of Armenia's Football Federation,” Pashinyan said, adding that Vanetsyan will focus on taking Armenia’s national football team to the finals of the upcoming European championships.

In the midst of a difficult qualifying campaign, some soccer fans took the news with good humor. “Armenian football is saved, the president of the football federation just left his other job,” human rights activist Arman Gharibyan wrote on his Facebook page.

After Pashinyan spoke, however, his spokesman made a cryptic statement suggesting that Vanetsyan might be under the former authorities' influence.

“It is necessary to find out who wrote the text attributed to Arthur Vanetsyan,” the spokesman, Vladimir Karapetyan, told the news agency Armenpress. “Hopefully, its authors are not the PR offices of corrupt officials who have escaped criminal responsibility by ‘mistake,’” an apparent suggestion that Vanetsyan may have gone easy on some members of the old government.

Given the lack of official explanation, interpretations varied as to what might have been behind Vanetsyan’s departure.

“Vanetsyan was the second most influential figure in the government, so it is common for two top people to clash like this,” Emil Sanamyan, an analyst at the Institute of Armenian Studies at the University of Southern California, told Eurasianet.

Sanamyan noted that in phone conversations scandalously leaked last year, Vanetsyan took a more cautious approach than many of his colleagues in the new government, taking care to protect relations with Russia and advising against the arrest of the then-head of the Collective Security Treaty Organization, Yuri Kachaturov.

“Vanetsyan was a key linchpin between the old system and the revolution,” Sanamyan said. “He was an advocate of more cautious approaches and his parting statement reflects that.”

Vanetsyan also was involved in one of the more dramatic, yet-unexplained staff shakeups to date: the arrest of the head of the main anti-corruption body, Davit Sanasaryan, who now faces charges of abuse of power.

Alen Simonyan, the deputy speaker of parliament and an ally of both Pashinyan and Vanetsyan, said following the resignation that he had not known of any problems. “On one side is my friend, on the other the leader of the country and my political leader,” he told journalists. Asked about one popular theory – that the resignation was related somehow to a Constitutional Court decision ruling that Kocharyan’s arrest was unjustified – Simonyan replied: “With that logic you could argue that this is also done to distract people from Amulsar,” referring to ongoing controversy over a gold mine project.

Vanetsyan’s resignation was cheered by representatives of the former leadership and other right-wing activists.

“The number of concerned people is increasing day by day,” Armen Ashotyan, the vice president of former ruling Republican Party, posted on Facebook. “Compassion for the present and future of the homeland and its honor does not recognize political differences. The real officer remains an officer.”

The founder of the right-wing party “Adekvad,” Artur Danielyan, posted on Facebook simply: “Because he’s a man,” in an apparent reference to Vanetsyan’s resignation.

To some, the resignation had echoes of the previous government. “The saddest part of Vanetsyan’s resignation is that no one asks why, for what?” wrote veteran journalist Armen Dulyan on his Facebook page. “It’s been the same under all governments. Unfortunately, we have to agree that at least in this matter absolutely nothing has changed since the revolution.”