The government has moved quickly to restore the city it has declared its cultural capital, but the lack of transparency has raised concern. 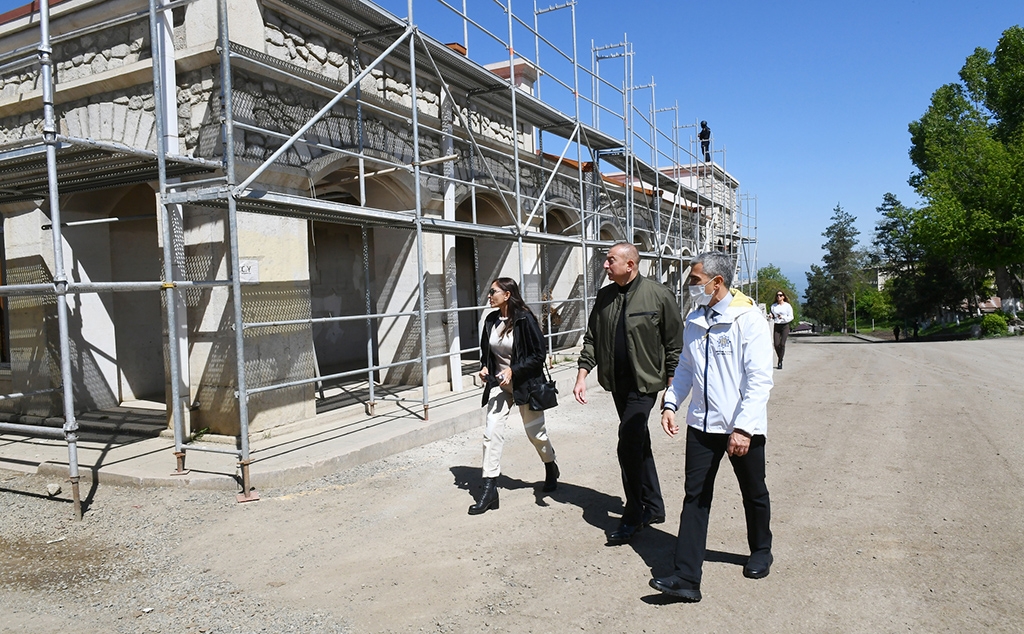 Azerbaijan has awarded a multimillion dollar contract to a British company to design a master plan to reconstruct Shusha, the biggest prize in the territories that Azerbaijan retook in last year’s war with Armenia.

But the reconstruction of Shusha, still in its very early stages, has already repeatedly faced criticism about the transparency and failure to take citizens’ wishes into account.

Local media reported on May 26 that the U.K. firm Chapman Taylor won a 3.94 million manat (about $2.4 million) contract to create a master plan for the city. But before that announcement, no information about a tender had been published on either the website of the State Committee on Urban Planning and Architecture or on the general government procurement website.

Chapman Taylor already has built several projects in Azerbaijan: the Deniz Mall, the mixed-use Port Baku Tower 2, and the luxury apartment complex K Residence. All were contracted by Pasha Construction, a division of Pasha Holding, a sprawling firm owned by Azerbaijan’s ruling family.

Immediately after the war ended last November, Baku began announcing ambitious reconstruction plans for the territories that it had regained control of. That included some parts of Nagorno-Karabakh that Azerbaijani forces had retaken during the war, including Shusha, as well as the seven territories surrounding Karabakh that Armenia had occupied since winning the first war between the two sides in the 1990s.

But Shusha has become the clear top priority of the reconstruction efforts. President Ilham Aliyev has made several high-profile visits to the city to highlight the ongoing work.

“Shusha will become one of the cultural capitals not only of Azerbaijan, the region, but also of the world,” Aliyev said during a February interview. “Shusha must have a very rich cultural life. Our compatriots who will live in Shusha must return there after all the work is done.”

In January, the head of the presidential administration Samir Nuriyev said that a delegation including urban planners had gone to Shusha to begin development of a master plan for the city. But a formal tender for the project never followed.

Even without a general plan, the government had already embarked on a number of construction and reconstruction projects.

Aliyev has laid the foundation for a new high school and signed an order to allocate 3 million manats ($1.7 million) to design and reconstruct the school. One hotel, the Khari Bulbul, has already opened, with staff made up of former Shusha residents. An art gallery is being renovated and a new mosque is under construction. Reconstruction of a 19th-century Armenian church also has, controversially, begun.

Aliyev has repeatedly emphasized that companies from countries deemed “friendly” to Azerbaijan will be invited to work on reconstruction projects; the countries he has named include Turkey, Israel, China, Italy, Belarus, and Russia.

During one visit in March, Aliyev and his family visited the sites of two hotels under reconstruction, Karabakh Hotel and Park Hotel. But no information has been announced about who is doing the work, economist Toghrul Valiyev told RFE/RL’s Azerbaijani service.

The same is true of a new highway being built to Shusha, Valiyev said.

“We know there are either three or five companies building the road, also the names of some Turkish companies have been mentioned, but the question is which law regulates their participation, how did they get there, was a tender announced, or did the state invite them?” Valiyev said.

In early April, the Interdepartmental Center of Coordination Headquarters, a new body tasked with coordinating activities in the newly retaken territories, announced that, as part of reconstruction efforts, some buildings in Shusha were being demolished.

A day after the announcement, videos of some demolitions appeared on social media and met with an irate response from Azerbaijanis, including former Shusha residents who hope to return to their homes.

Opposition leader Ali Karimli, the chairman of Popular Front Party of Azerbaijan, shared one such video on his Facebook page and wrote that residents had no input into the reconstruction process.

“Although it is now safe to go to Shusha, the people of Shusha are not allowed to go there, and after 28 years of longing, they cannot experience the joy of seeing their homes, neighborhoods and cities,” Karimli wrote.

Some former Shusha residents also complained to BBC Azerbaijani Service that they were not aware of the demolitions. “I want Shusha to keep its unique character, to have the public participate in the process, to have its opinion taken into account,” one such Shushan, Hikmat Sabiroglu, told the BBC.