The Kremlin learned several valuable lessons from the 2008 war, including the fact that it costs a lot of money to maintain a large-scale military operation. 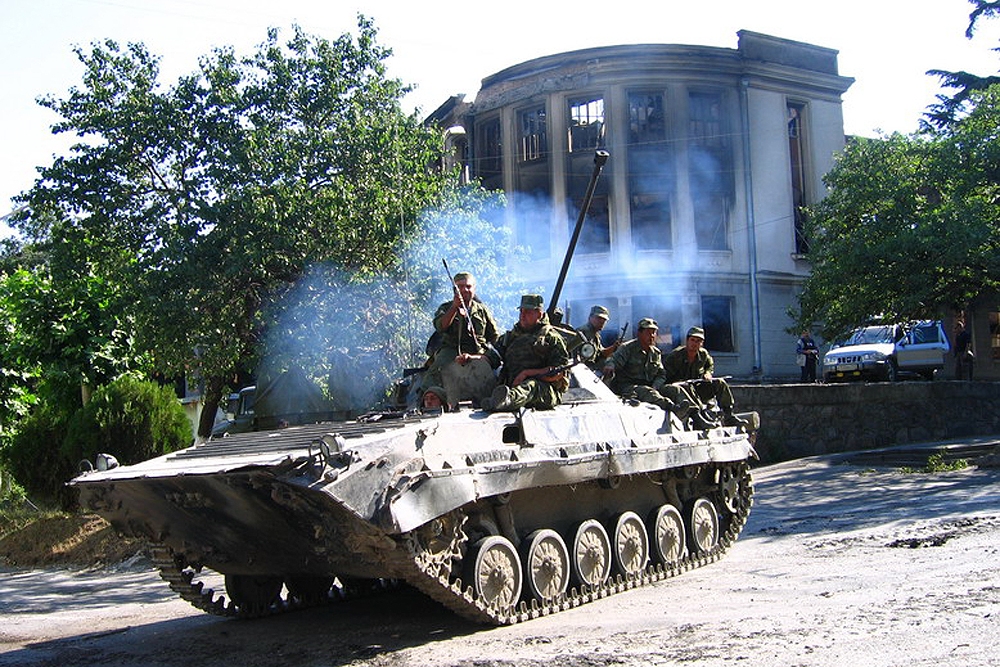 Russian troops in South Ossetia during the 2008 Russo-Georgian War. Russia popularized the concept of “hybrid warfare” starting with its 2014 annexation of Crimea, but this new form of projecting power actually dates back to the conflict between Russia and Georgia in August 2008. (Photo: Yana Amelina via Wikimedia Commons, CC BY-SA 3.0)

Russia popularized the concept of “hybrid warfare” starting with its 2014 annexation of Crimea. But this new form of projecting power actually dates back to the conflict between Russia and Georgia in 2008, when the Kremlin was able to experiment with elements of hybrid warfare and learned basic lessons later applied in Ukraine.

Strategically, the 2008 Georgia conflict took place at a time of declining Russian influence and military power within Eastern Europe, including the Caucasus, which was cut off geographically from the rest of Europe by the Black Sea. The Kremlin faced two main threats – NATO and the EU. The first was military, in that member states of NATO gain the benefit of Article 5 of the Washington Treaty in the event of conflict, which can include immediate response from allies, including several nuclear powers such as the United States, the United Kingdom and France. Facing such a threat, Russia would then assuredly renounce any possible military intervention.

To the leaders in Moscow, however, there was a flaw in the underlying reasoning behind NATO. For one, Article 5, the mutual defense clause, cannot be invoked unless an "aggressor" is legally identified, which means that a civil war in a member country of NATO would not qualify for an Article 5 intervention. Even with its limited military power, the Kremlin began to see opportunities in the weaknesses and internal divisions within NATO member states, which in turn opened up the possibility for a less costly, more subtle approach to counter the Alliance.

The second threat is embodied by the EU’s Eastern Partnership initiative. Launched in 2009, this program allows the EU to finance projects that favor the promotion of European values in countries that are not yet members, such as Ukraine and Georgia. This non-military influence turns out to be problematic for Moscow because it weakens Russia’s influence in its historic near abroad, which has traditionally served as a buffer between it and the Western world. If funding to Eastern Europe posed a problem, the prospect of a third major expansion to the East – that is to say Moldova, Ukraine, and Georgia – was seen as unacceptable. According to Moscow, that would mean the loss of control of the Black Sea and the presence of a European outpost in the Caucasus.

In the face of these two threats, Russian leaders moved quickly to develop a response. When it comes to NATO, it showed a strong interest in exploiting the legal Article 5 loophole that required identifying a perpetrator. It did so by accentuating the development of cyber-war and raising the possibility of civil war in NATO members, for example, by using regional claims of some minorities like the Russian speakers in Estonia.

Moscow also sought to push back on the Eastern Partnership by also playing on its legal character. Integration of a new member into the EU is based on territorial control by the government in question. Put simply, the European Union cannot share borders with "states that do not exist." As a result, countries that wish to apply to join the EU cannot have questions about their territorial integrity. This helps to explain why, of the six Member States of the Eastern Partnership, only Belarus has no territorial dispute.

Unlike what happened in Crimea in 2014 and in Donbas in 2015, there was no need for the Kremlin in 2008 to create a separatist territory. Georgia already had had two breakaway regions since 1992 – Abkhazia and South Ossetia. For Russia, then, it was more a question of strengthening these separatist trends, and pushing the government of Georgia to make a strategic mistake by attacking these de facto states.

To strengthen separatist trends, the Russian government used Abkhaz- and Russian-language media in Abkhazia. Sputnik-Abkhazia, a major Russian-language outlet, began to publish an increasing number of articles that presented the territory in a positive light, with the emphasis on friendship with the new Russia that brought protection by deploying troops in 1992, which remain there as “peacekeepers” to this day.

Today, more than 30 journalists from Sputnik can be found in the premises of a new business center in the heart of Sukhumi – a large number compared to the relatively low priority accorded to Abkhaz issues by Russian media, even at the regional level. The presence of such an unusually high number of journalists could easily be explained by the possibility to use them in the event of recurrence of conflict with Georgia to encourage the strengthening of regional identity.

Russia’s divide-and-rule strategy culminated in its diplomatic recognition of Abkhazia in 2008, echoing Kosovo’s recognition by the West. The recognition of a separatist territory remains the fear of all states with territorial disputes. The events in the Caucasus and in Abkhazia in 2008 mark a rupture in the hybrid war design of the Kremlin, combining approaches that presaged what happened in Ukraine six years later with Crimea’s annexation, and the instrumentalization of media in the southeast of the country.

The Kremlin learned several valuable lessons from the 2008 war, including the fact that it costs a lot of money to maintain a large-scale military operation. Given this realization, Russian leaders found that assisting proxy forces is a more cost-efficient way to achieve strategic objectives.

This lesson on the costs of a large-scale response, rather than local action, can be found in Ukraine in 2014-2015. Instead of getting directly involved, Russia used a limited number of unofficial forces, such as the so-called “little green men,” and relied on local groups to provide weapons to separatists, in order to diminish the chances that Moscow could be clearly identified as a foreign aggressor.

The Caucasus was, in many ways, a laboratory for experimenting with strategies of hybrid warfare well before the events that took place in Ukraine. To this day, Georgia remains a diplomatic testing ground for the Kremlin – given the presence of Abkhazia and South Ossetia. One future possibility could be a Russian effort to bring Abkhazia and South Ossetia into the Eurasian Economic Union. Such a move could more deeply integrate the two regions with Russia, without necessarily connecting them within the federation, as was the case with Crimea.

This EurasiaNet analysis is adapted from a longer version (http://www.macdonaldlaurier.ca/about/welcome-to-mli) that was originally was published by the Macdonald-Laurier Institute, based in Ottawa, Canada. Michael Eric Lambert received a Ph.D. in History of Europe and International Relations from Sorbonne University (France). He is Founding Director of the Black Sea Institute and Visegrad Fellow at the Institute of International Relations in Prague.