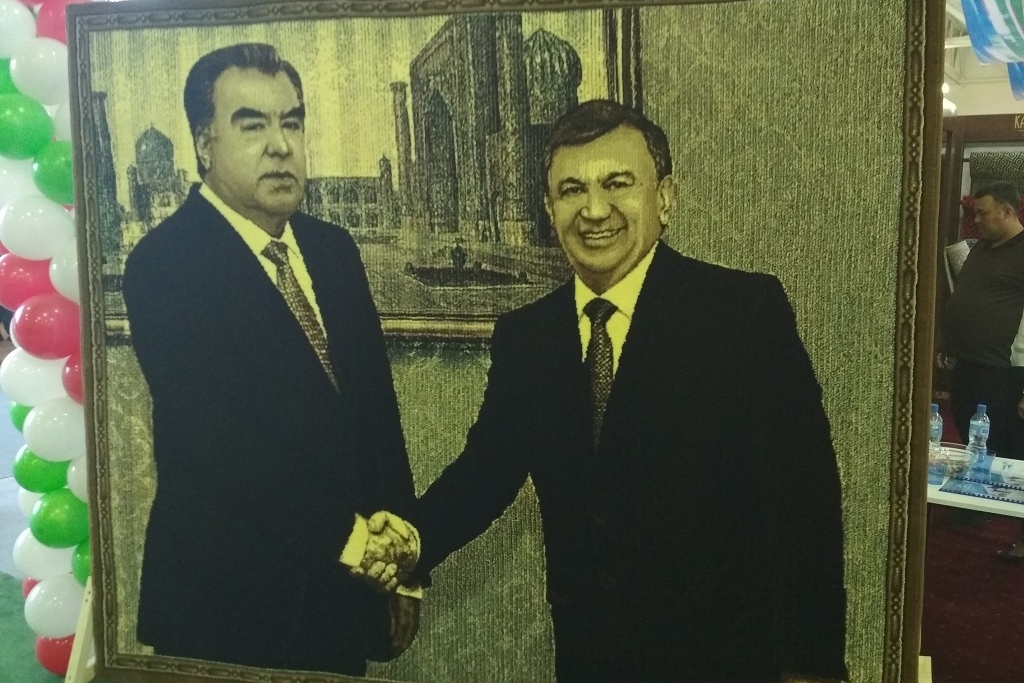 As visitors arrived at the UzExpoCenter exhibition hall in Tashkent last week, they were greeted by sight of a carpet woven with the image of the presidents of Uzbekistan and Tajikistan shaking hands. Prior to this year, the two Central Asian states had engaged in a low-level cold war for the best part of two decades. (Photo: EurasiaNet.org)

As visitors arrived at the UzExpoCenter exhibition hall in Tashkent last week, they were greeted by sight of a carpet woven with the image of the presidents of Uzbekistan and Tajikistan shaking hands. Some took photos of themselves cheerfully standing in front of the carpet.

For three days, ending October 13, Tajik entrepreneurs representing around 120 companies showed off their wares at the trade fair in the Uzbek capital. The event was a response to an analogous event in April organized for Uzbek exporters looking to expand their market in Tajikistan.

Prior to this year, Uzbekistan and Tajikistan for the best part of two decades had engaged in a low-level cold war. Thus, the sense of novelty about the goodwill exchange is strong.

A member of the Tajik delegation, Dushanbe-based entrepreneur Abdumavlon Abulloyev, told EurasiaNet.org that he last visited Uzbekistan in 1985, when he was 33 years old. When asked to comment on the fair, he seemed more interested in talking about the excitement of being back. “When I crossed the border, it felt as though we had never left. … I am so happy with the positive developments taking place between our countries,” said Abulloyev.

Abulloyev’s company processes cotton and produces a wide range of clothes, from overalls for manual laborers to school uniforms. For him, as for many Tajik manufacturers, the prospect of gaining a foothold in Uzbekistan’s populous and geographically convenient market is appealing.

His Uzbek partner, Jamallidin Yakubov, however, was slightly more circumspect and said that although the countries may be growing closer on a diplomatic level, lots of details need to be addressed to boost imports and exports. “When importing goods from Tajikistan into Uzbekistan, we have to pay a 100 percent import tariff. That means it is easier to export Tajik sewed goods and clothes made from cotton to Kazakhstan,” Yakubov said.

Slapping punishing tariffs on imports was the late President Islam Karimov’s notion of how to keep external competition at bay. His successor, Shavkat Mirziyoyev, has embarked on a radically different approach to trade and is seeking to simplify life for exporters and importers alike.

Although the focus at the UzExpoCenter was on selling the Tajikistan brand, the deals went both ways.

Mastura Tagayeva, manager for exports and marketing at Uzbek personal hygiene products supplier SofFresh, said she went to the Dushanbe fair in April and was struck by the level of excitement the event generated. And during her visit to the Tashkent exhibition, Tagayeva managed to bag another sale.

“We have reached an agreement for a Tajik company to buy from us paper cones [used for winding yarn], diapers and feminine hygiene products,” Tagayeva said.

There was particular excitement at the stand for Italian denim company Carrera, which has a factory in Tajikistan. Visitors were especially struck by the low prices for men’s jeans — at $12 apiece, they would compete well in the Uzbek market.

Uzbek model Viviana Nurmetova, the company representative at the Carrera stand, explained that all their denim goods are manufactured with Tajik cotton. Around 90 percent of their Tajik output, which ranges from jeans to shirts and jackets, is at the moment sent to Italy and then exported onward to markets in Western Europe.

As long as Karimov was in power, it would have been inconceivable to stage any such fairs. Fazliddin Abdiyev, a 23-year-old shoe manufacturer, told EurasiaNet.org that not only was he visiting Uzbekistan for the first time, but that the idea of traveling to Tashkent had never even crossed his mind before. Abdiyev said he is dipping his toe into the Uzbek market to see what the competition is like.

“We produce quality wares with Turkish equipment. Our military-style boots should find demand among Uzbek businesses. They are really in with young people right now,” Abdiyev said.

Economist Yuliy Yusupov noted that even though the barrier for bilateral trade is coming down, administrative obstacles, including the visa regime and import tariffs, remain in place. Earlier this month, Uzbekistan lifted visa requirements for Tajik citizens visiting the country for a single day, but longer stays still require completing onerous paperwork and an $18 visa fee.

“One key problem of the Tajik economy is the excessively high rate of the Tajik currency, on account of all the remittances from migrants. The somoni is depreciating more slowly than inflation is increasing, and that means the real exchange rate is increasing. In real terms, Tajik goods are getting more expensive, and imports getting cheaper,” Yusupov said.

Tajik journalist Muzaffar Yunusov said that the high tariff wall has fueled a robust trade in contraband goods. Black marketeers take meat, potatoes and cigarettes from Tajikistan across the border. Flowers, tomatoes and fuel go the other way.

Recent data suggests that either trade is on the rise or that some of it is emerging out of the shadow economy. Bilateral trade between Uzbekistan and Tajikistan rose by 17.8 percent year-on-year in 2016 to $197 million, according to Uzbek government figures. The figure for the first nine months of this year is already $178.2 million, indicating that this year will be significantly better than last.

In April, when Tajikistan hosted a fair of Uzbek goods, about 160 companies touted hundreds of varieties of goods from tractors to cotton harvesters, cars to trucks and buses, and pharmaceutical materials to food and textiles. Deals worth a total of $50 million were signed for export of Uzbek goods to Tajikistan.

On the first day of the Tajik fair, 19 contracts worth a total of $27 million were signed. No figures are yet available for the entire three-day event.

On the final day of the Tajik fair, Uzbek officials announced that the national air carrier, Uzbekistan Airways, would imminently be lowering its fares for return flights between the two capitals — from $350 to $190.