A chance for contemporary Kazakh artists to show their works on three continents has been overshadowed by mismanagement and dodgy contracting. 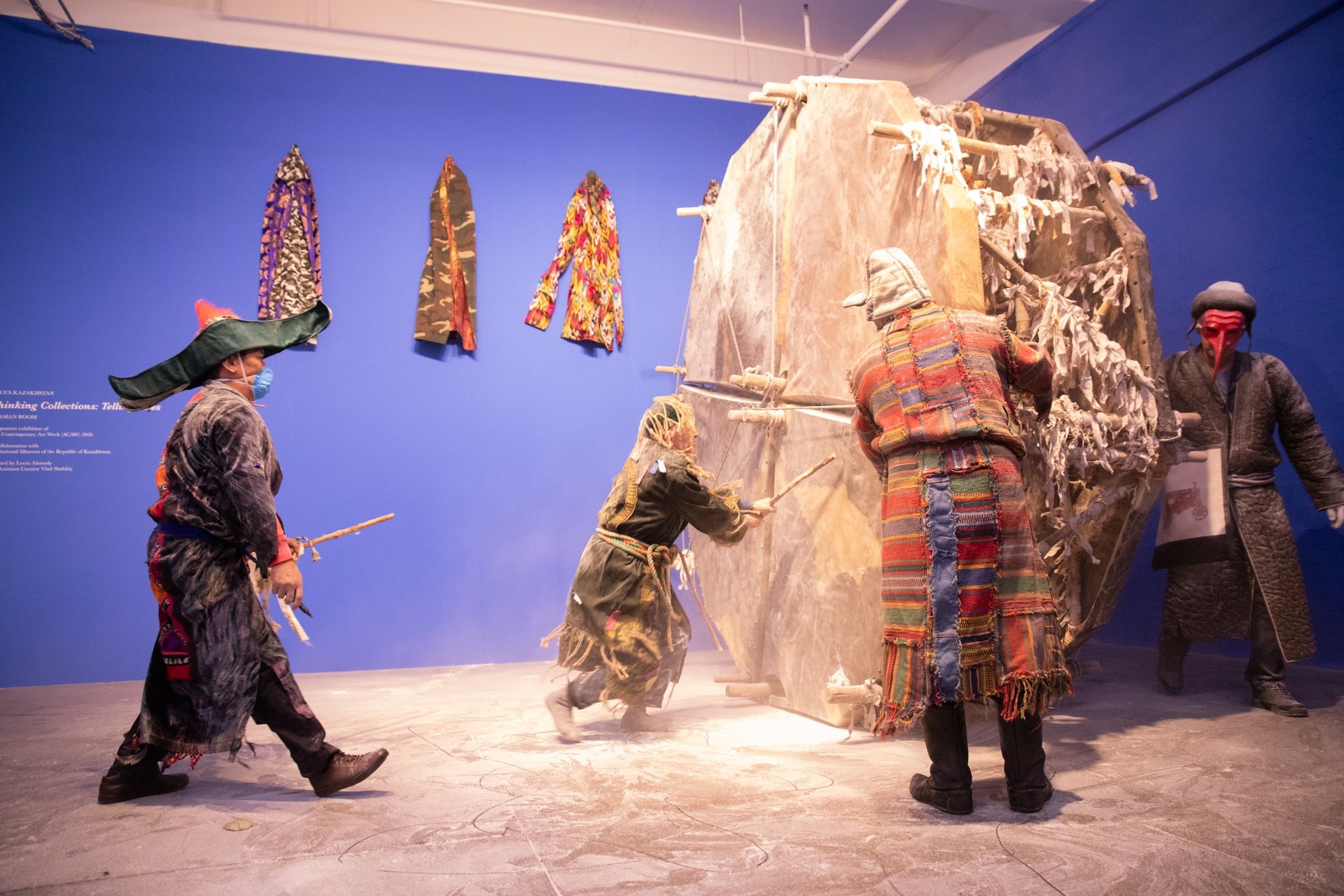 Kazakhstan spends many millions burnishing its international reputation. This year the government spent one of those millions introducing the global art elite to the country’s shady business culture.

But after wrapping up the Jersey City show, around 200 works by members of the celebrated art collective Kyzyl Tractor were seized upon return to Kazakhstan by the firm handling transportation logistics, a company called ASA Sadykov. The firm says it has not been paid by the government contractor that received $1 million to put on the tour. The contractor also reportedly owes money to curators in Germany and the United States.

Nur-Sultan funded the traveling exhibition as part of its Ruhani Zhangyru (“Spiritual Awakening”) initiative, which is designed to bolster national identity. The National Museum of Kazakhstan and the Ministry of Culture together paid the $1 million to BBK Pro, a little-known private firm, to handle all fees associated with the project – such as leasing spaces, per diems for performance artists and transportation, which BBK Pro subcontracted to ASA Sadykov.

Earlier this year, ASA Sadykov won a ruling against BBK Pro, arguing that it was shortchanged by 19 million tenge (almost $50,000). Despite a court order, BBK Pro has not yet paid. Most of the seized pieces have been returned to the National Museum, except for five works by the Kyzyl Traktor collective. According to court documents seen by Eurasianet, in August a judge ordered the five pieces returned to the museum. ASA Sadykov says it is still holding the pieces at an Almaty warehouse until BBK Pro pays its outstanding balance. The Kyzyl Traktor collective has penned an open letter to the president asking for help retrieving its paintings.

“Before we only traveled to [Russia],” Abenova said. “It’s natural for newcomers on the art scene to employ third-party contractors. We did not have the experience to handle it on our own.”

The National Museum opened in 2015 with Abenova as head of the museum’s Center for Modern and Contemporary Art. She has struggled to feature artists interested in social commentary rather than the national mythmaking so dear to the country’s leaders. During Expo 2017 – a costly coming-out party for the new capital – the museum shunted contemporary artist Saule Suleimenova to a remote space in the basement. Nevertheless, Abenova says, the museum is pushing boundaries: "For the first time, a government entity hosted exhibitions of contemporary artists who shocked the public, artists who in the past couldn't dream of being exhibited there."

When she learned the funds for the Focus Kazakhstan exhibition had been allegedly mishandled, Abenova says, she resigned from the museum. Along with a group of curators and artists, she took to social media to raise awareness.

“I was desperate. Artists were being scammed and I could not let it get swept under a rug,” Abenova said.

The National Museum defends hiring BBK Pro, saying that the company, though it had not previously participated in a museum tender, “met the qualifications and documentation requirements,” according to a statement reprinted by Informburo.kz.

Little is known about BBK Pro and the company hasn’t commented publicly about the dispute. Moreover, it is unclear who was running the company when it signed the contracts with the National Museum. While artists and curators claim that a man named Bauyrzhan Kurmanbekov was responsible for fulfilling BBK Pro’s obligations, his name is not listed on the contracts. Instead, someone called Gulzhan Asaumurzina signed the documents.

The Focus Kazakhstan affair is not the first upset the art community has suffered this year. In March, the National Museum announced on Facebook that due to a lack of funding, it was cancelling Kazakhstan’s inaugural pavilion at this year’s Venice Biennale of Contemporary Art, one of the world's most illustrious art gatherings.

For Abenova, the response from Kazakh artists is a “revolution of sorts.”

“For the first time, our post-Soviet art community is speaking out about the sort of behavior that has been going on for decades,” Abenova said. “We’re setting a precedent to make sure that, in the future, this type of mismanagement is no longer accepted.”