The country is banking on new hydropower projects to solve energy problems. But the communities most affected don’t trust government assurances that the dams will be safe. 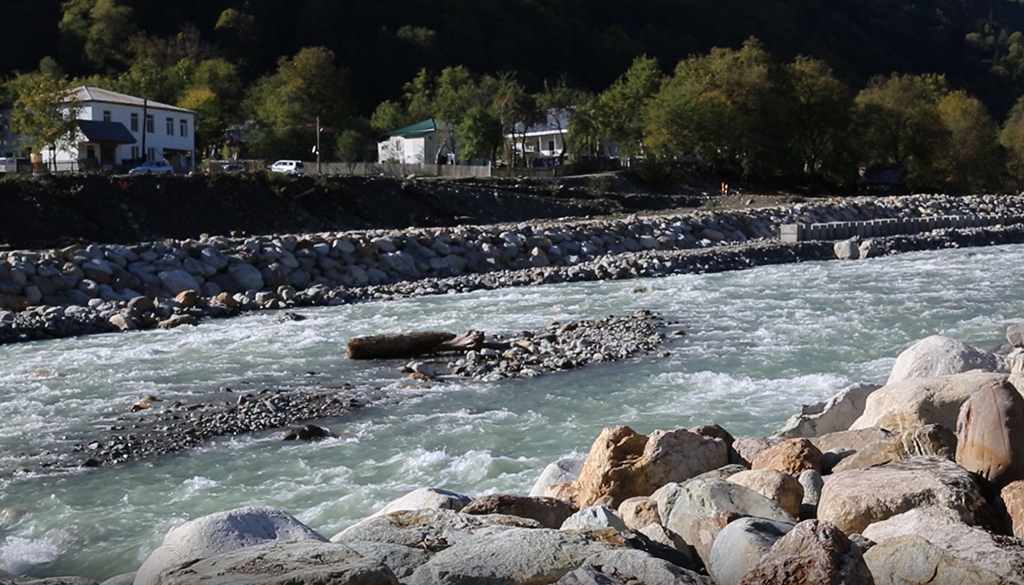 Georgia’s government hopes a 130-meter dam on the Nenskra River, scheduled for completion next year, would help solve the country’s energy shortages. (photos by Giorgi Lomsadze)

The village of Khaishi is a bucolic paradise, where bees buzz in and out of pastel-colored hives and cows picket the highway, as if sworn to prevent the traffic from proceeding further. This is the gateway to Svaneti, a region of northwestern Georgia known for its spectacular snow-capped peaks and unique culture.

About 30 kilometers upstream, the Georgian government and a Korean company are developing the Nenskra hydropower project, one of several efforts aiming to convert Svaneti’s mountains and rivers into electricity to reduce the country's reliance on imported energy.

But to many residents of Khaishi and other villages around the Nenskra River, Svaneti’s nature should be respected and revered, not exploited. They worry about the destruction of the surrounding nature, and fear that the planned 130-meter dam would be a ticking time bomb.

Zurab Nizharadze, a math teacher in Khaishi, takes a visitor to the edge of his garden to show off the narrow, lush valley that opens below, with village houses stacked like Jenga blocks on the steep slopes.

“This is a seismically unstable region, nature is not predictable here and neither are the risks of building a large reservoir,” he says. “The entire valley below the Nenskra dam will be living in fear of a disaster.”

Assurances that the dam – scheduled to be completed next year – will be a sturdy structure capable of withstanding a magnitude 9.0 earthquake do little to allay the highlanders’ concerns. “We constantly hear stories about problems with the poor quality of construction across the country,” Nizharadze says.

In Chuberi, another settlement on the bank of Nenskra, local resident Gari Ckhvimiani also worries about the collapse of a dam and the 176 million cubic meters of water it is slated to hold. “I spoke to the engineers and they say we will have 15 minutes to evacuate the area in case of emergency,” he says. “Is that really enough? What if it happens at night?”

Government officials and the project’s developer, Nenskra Hydro, a subsidiary of Korea’s state-owned company K-Water, insist that the risk of a disaster is minimal and that the locals’ fears are ungrounded. “The Nenskra hydropower plant will help us produce more power in times of deficit and will help Georgia achieve energy independence,” Giorgi Chikovani, director of the state-run Energy Development Fund, told Imedi TV in a July 2019 interview. 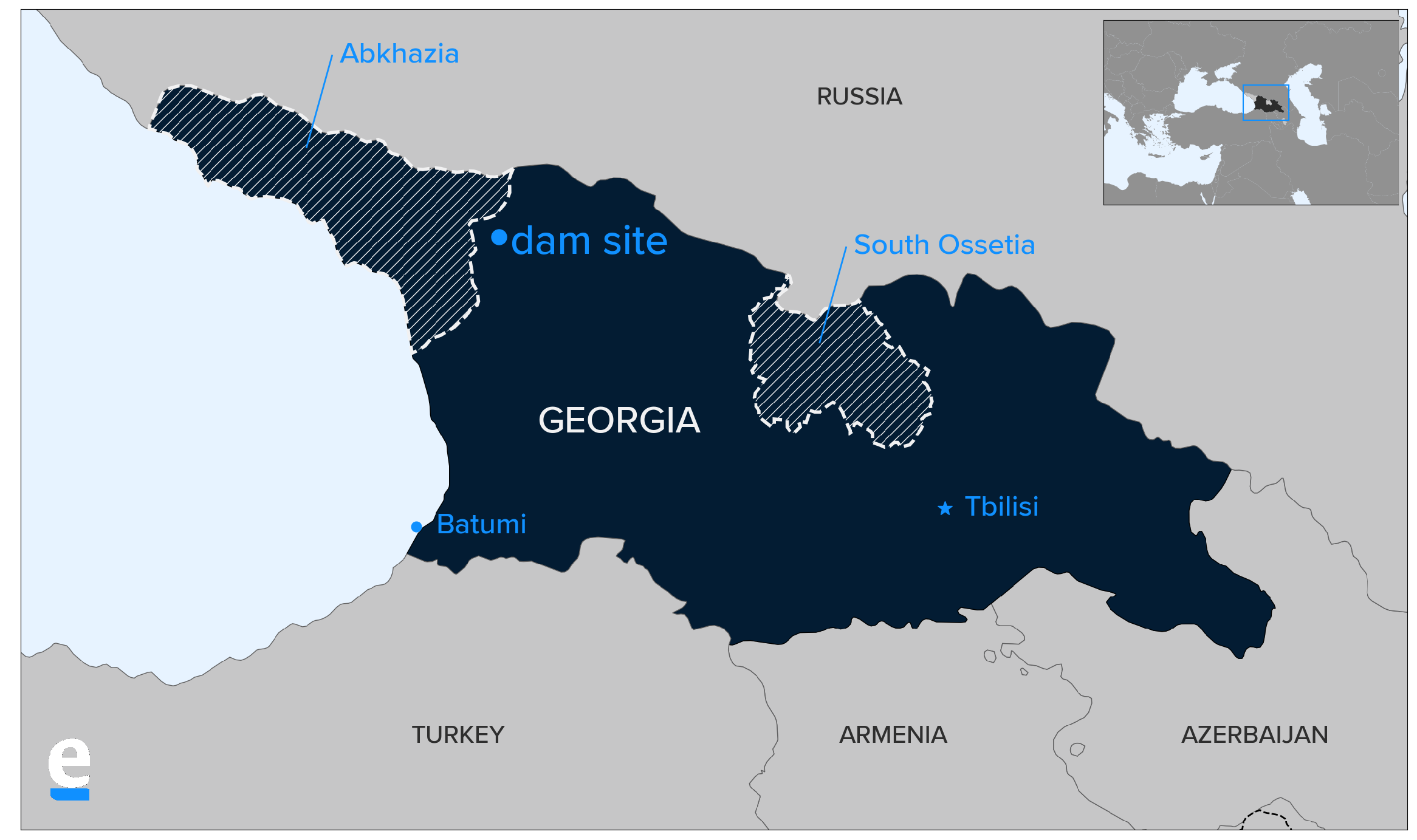 Whatever the potential danger for an accident, the threat to the region’s environment is more certain.

The dam and its related infrastructure will gobble up some 700 hectares of forest, a habitat for wildlife like lynx and the endangered Caucasian tur goat-antelope. Due to its rich flora and fauna, the region is slated to become part of the Emerald Network, a pan-European list of natural habitat protection areas, although in 2016 the Georgian government dramatically reduced the size of the area proposed for protected status in order to accommodate several hydropower projects.

“Incredibly, now we don’t have a square meter of protected territory in Svaneti, which is the natural jewel of Georgia,” said Dato Chipashvili, of Green Alternative, an environmental group leading the fight against the Nenskra project.

In Nakra, a striking, leafy valley parallel to Nenskra, local resident Gioni Tsindeliani fears that construction of the dam could provoke additional landslides – already common in the area – and deprive the community of its water supply. Part of the Nakra River will be siphoned off and shunted, via a tunnel, to the Nenskra to provide more water to turn the power plant’s turbines.

The issue is an existential one for Nakra, he says: “Nobody wants to live without a good water supply and in a constant fear of disaster, so next time you come here you may find this place empty.”

Nenskra is the largest of many dams built and planned all across Georgia to keep up with the nation’s growing demand for electricity. Consumption of electricity has been growing at an average rate of 5 percent annually over the last 10 years, reaching about 13.3 billion kilowatt hours in 2018, according to government data. The nation keeps up with the demand – barely – through a combination of imported and domestically produced power. Fully 40 percent of the energy Georgia consumes is generated by a single Soviet-era giant hydropower complex, Enguri.

For all of Enguri’s imposing dimensions – its 271.5-meter arch dam is the sixth tallest in the world – it was never meant to serve as the nation’s main power source. Instead, the complex was designed to kick in at the peak evening hours, when the nation’s lightbulbs switch on.

It was part of a Soviet-designed complex of energy generation resources around the region designed to complement one another. With its rugged terrain and plentiful water resources, Georgia had more than 60 large and medium-sized hydroelectric facilities, along with hundreds of miniature hydropower plants, some of which are still operational. In Azerbaijan and Chechnya fossil fuels were developed. In Armenia, a nuclear power plant was built.

But following the collapse of the Soviet Union, Georgia was left on its own electrically. And its heavy reliance on hydropower – roughly 80 percent of its locally produced electricity – has left the country with shortages in winter, when rivers are low and the demand for electricity is high.

Georgia has compensated by importing electricity in winter and converting its usage of Enguri from peak supply mode to base supply mode, something it was not designed for. That means it operates only at a fraction of its potential 1,300-megawatt capacity.

In the mid-2000s the government began to try to develop new hydropower facilities, to make Georgia electricity self-sufficient and even export electricity at times of high water. The hydropower drive, however, has touched off a litany of environmental concerns, especially in the mountain communities closest to the projects.

Last year, there were violent clashes between locals and police in the Pankisi Valley over plans to build a power plant there. In 2014, a glacier flood killed six workers who were building another dam, at Dariali, another high mountain area just north of Tbilisi. And seven years ago, in Svaneti itself locals managed to block an even bigger hydropower project, the 200-meter Khudoni dam.

Green Alternative argues that to avoid environmental and social controversies the government should instead focus on solar and wind energy, given that Georgia has an environment conducive to both, and rehabilitate old hydropower plants rather than building new ones.

The group also insists that the financial benefits of new hydropower projects are questionable, when compared with solar and wind alternatives.

The government has offered generous conditions for Nenskra’s investors which, Green Alternative claims, will ultimately result in excessive costs for the electricity it produces. The state will assume responsibility to buy up all the electricity produced by Nenskra for 36 years, after which the plant will be handed over to the government. For the first 13 years, the government will pay 10.6 cents for kilowatt hour, which will rise to 12.7 cents for the following 23 years.

The government also has underwritten the hydrological risks, meaning that if the Nenskra river’s resources prove insufficient to produce the planned annual output of 1.1 billion kilowatt hours, the government bears the responsibility to compensate the company. Tbilisi also threw in tax breaks and other discounts.

As a result, the electricity produced will be too expensive to export and also unaffordable for local consumers, environmental activists insist. They suspect that the true motivation for the government’s enthusiasm for dam-building is the potential for kickbacks.

“Pretty much anywhere where there is a lot of concrete, there is a lot corruption because it is impossible to track the real cost of concrete and other construction materials used,” said Chipashvili of Green Alternative. “Any government investment in construction, be it roads or dams, offers fertile ground for corruption, as costs are inflated and back deals for licenses are common.”

Green Alternative argues that before building new hydropower plants, the Georgian government should have tried upgrading the old ones. “You can increase the efficiency of old power plants by almost 30 percent, if you clean the sediment that collects in the reservoirs and also if you upgrade the Soviet-era infrastructure,” Chipashvili said. “Why would not we do that instead before we start destroying new valleys and gorges?”

In Khaishi, meanwhile, Nizharadze wishes that the authorities would focus on preserving Svaneti’s nature and culture – or at least leave it alone – rather than building dams in it. “You shouldn’t build power plants at the foothills of glaciers, as you never know what part of it will come crashing down and when,” he said. “You should not mess with nature like that.”