The United States is seeking update global security frameworks for the 21st century. China’s reluctance to join discussions on limiting nuclear weapons, however, could be increasing the chances of a new arms race. 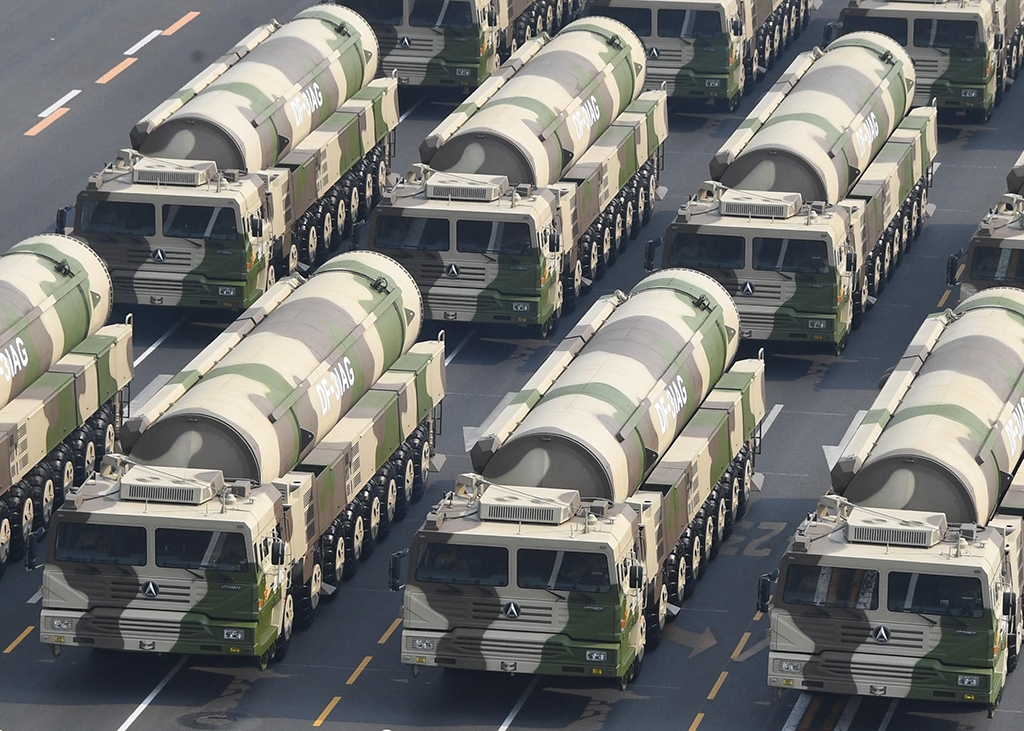 DF-31AG missiles at a parade in Beijing last year (chinamil.com.cn)

It’s no secret that United States arms negotiators want China to be part of any new pact to limit nuclear weapons. But Moscow is refusing to work with Washington to cajole China into participating in talks. A leading Russian arms control expert, writing recently in the journal Russia in Global Affairs, a periodical that often reflects Kremlin viewpoints, claimed that trying to compel China to agree to limitations on its nuclear arsenal could do more harm than good.

Alexander Savelyev, chief research fellow at the Primakov Institute in Moscow, argued that if China were to accede to Washington’s wishes and join Russia and the United States in a new strategic arms limitation framework, Beijing would need to alter its nuclear doctrine from a “no-first-use” policy to a “launch on warning” stance. Such a shift could have a destabilizing impact on global security, he contended.

“China, if it agrees to the drafting and signing of a nuclear arms control treaty, will certainly have to depart from the principle of no-first-use of nuclear weapons,” Savelyev wrote. “This may also trigger an enhanced arms race and induce China to adopt more aggressive nuclear arms concepts.”

China’s chief hang-up about accepting limits on nuclear arms is connected to the concept of transparency. In terms of numbers, China currently lags behind the United States and Russia when it comes to nuclear warheads and delivery systems. Thus, secrecy and subterfuge are essential elements of Beijing’s nuclear doctrine: To retain a retaliatory nuclear capacity, China is extremely tight-lipped on precisely how many nukes it possesses, and where they are deployed.

U.S. negotiators have made it clear that any future arms control agreement would require a strong verification component to ensure compliance and build mutual trust. Accordingly, to fulfill the terms of a potential pact, Chinese leaders would have to submit to verification procedures that undermine their existing “hide-and-seek” approach to maintaining a nuclear deterrent. Savelyev portrayed the verification issue as an insurmountable obstacle for China.

“Even if such a [hypothetical] agreement did not impose any obligations on China requiring reduction of its nuclear potential, Beijing would be expected to provide exhaustive information about its nuclear weapons and deployment sites,” Savelyev writes. In order to retain a retaliatory strike potential in a situation where the information about the deployment sites of China’s nuclear forces has been disclosed […] China would have to exert major efforts to ensure the invulnerability of at least some of them.”

Although writing as independent expert, Savelyev’s analysis adheres to Russia’s official position on Chinese participation. Russian leaders have stated that while Moscow would welcome Chinese participation, Russia will not exert any pressure on Beijing to join the process. Despite a great disparity in their bilateral balance of trade, Russia in recent years has come to consider China as a strategic partner in efforts to counter U.S. global influence.

U.S. negotiators aren’t holding their breath while waiting for their Chinese counterparts to come to the table. They have put on hold the idea of China joining talks to extend an existing treaty, known as New START, which caps the number of warheads and delivery systems that each signatory can possess. Instead, U.S. officials are focusing attention on prolonging this bilateral deal with Russia. Even with the China stumbling block removed, talks are stalled and the clock is running out: If the United States and Russia can’t settle their differences over an extension, New START will expire in early February. The expiration of the pact could open the way for a new, highly destabilizing arms race, some experts worry.

The official Chinese position is that Beijing will start negotiating only after the United States and Russia have reduced their own nuclear arsenals to a level commensurate with China’s. Such a stance is dismissed out of hand by U.S. experts as unrealistic and is widely viewed as an indication that China is not interested in engaging the United States.

Given Beijing’s secrecy, there’s no way to be sure precisely how many nuclear warheads China possesses. A recent Pentagon report highlighted a discrepancy in China’s words and actions in the area of arms control. China is engaged in a robust strategic arms build-up aimed at improving its ability to project power abroad, the report asserted, adding that its rapid modernization efforts include the development of nuclear-armed strategic bombers and submarines. Within a decade, China is expected to at least double its stockpile of nuclear weapons, exceeding the “minimal deterrent” level that is specified in China’s existing nuclear doctrine.

While the United States may be willing to extend New START without Chinese participation, officials in Washington remain insistent that China needs to join the arms control process in the not-too-distant future. The wrangling over China’s inclusion in arms-control frameworks comes at a time when Beijing is becoming much more militarily assertive in bordering areas, including Central Asia and the South China Sea.

Beijing’s strategic footprint in Central Asia has expanded significantly in the past few years, prompted ostensibly by sporadic incidents of resistance among minority Muslims to Han Chinese rule in western China. China has established a vast re-education camp system for members Muslims in western China, citing a need to contain what it characterizes as terrorism.

A prominent symbol of China’s emerging forward defense strategy to contain Islamic militant activity is a small military base in Tajikistan, situated not far from the point where the Tajik, Afghan and Chinese frontiers converge. The recent Pentagon report indicated that Chinese officials are interested in expanding the country’s military presence in Tajikistan.