Turkey: A Dispatch from the Capital of Baklava 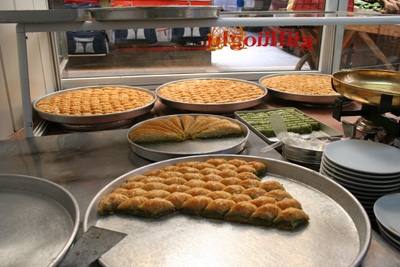 A baklava shop in Gaziantep, Turkey

In a previous post, this blog wrote about the grill masters of Gaziantep, considered by many to be Turkey's culinary capital. Along with kebabs, the city is also famous for its baklava, sold from countless little shops throughout Gaziantep.

In an article in yesterday's New York Times, writer Elizabeth Field, who recently made a baklava pilgrimage to Gaziantep, provides an excellent take on what make the city such a inviting culinary destination. From her piece:

The first thing you notice among passengers departing from Oguzeli Airport in Gaziantep, Turkey, is the profusion of shopping bags containing baklava, the intensely sweet Middle Eastern phyllo pastry and nut confection that is a staple of every Turkish celebration. This city of about a million people, in the province of the same name and situated on the Silk Road about 530 miles southeast of Istanbul, claims some 100 baklava shops, which supply 90 percent of the baklava consumed in Turkey. Last December, Gaziantep baklava, which is made with locally grown pistachio nuts, was awarded “protected status” by the European Union, a designation that recognizes a specific local food, protects it from imitators and potentially helps boost tourism to the area.

I had never heard of Gaziantep (often called Antep), until I attended the Gastro Istanbul culinary festival in May 2013. Countless Turkish chefs extolled it as not only the baklava capital of Turkey but also the home of Turkey’s richest regional cuisine. “It’s got a great climate that produces outstanding local produce, an ancient history that reflects Anatolian, Middle Eastern and Mediterranean influences, and a traditional food culture,” the Turkish food writer Aylin Oney Tan told me.

Those unable to make it to Gaziantep to taste the city's famous baklava (which was recently awarded "protected" status by the European Union) can do the next best thing, which is to visit Istanbul's Gulluoglu, a baklava shop run by a family from the southeastern Turkish city, or Antebi, an Istanbul restaurant that actually brings baklava in from Gaziantep by bus.