Turkey: A Wonder of the World is in Middle of Religious Controversy 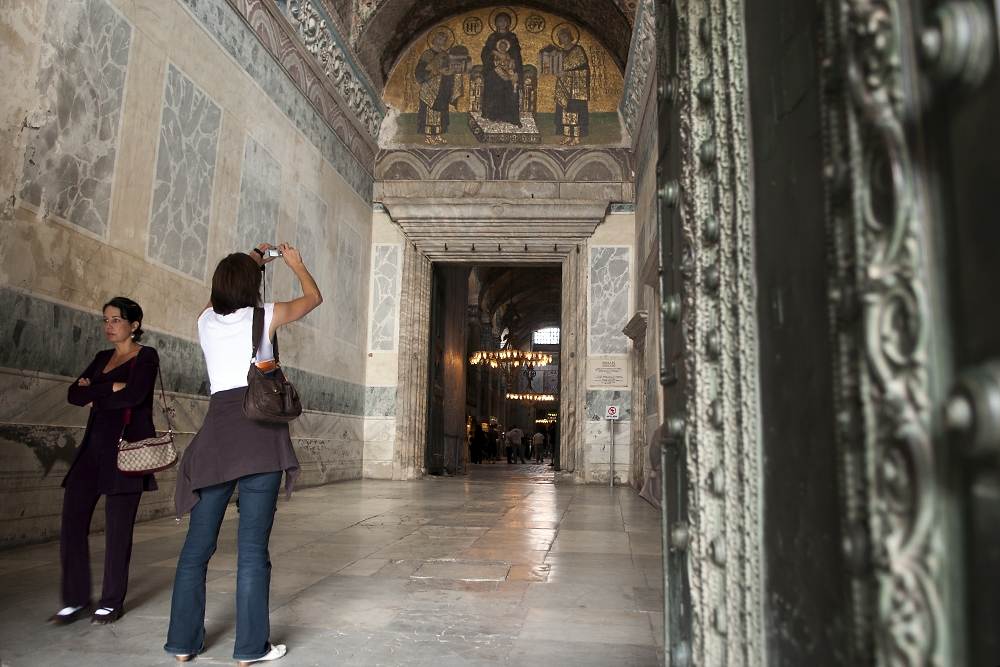 Istanbul’s Hagia Sopia: from church to mosque to museum, and now back to mosque again? (Photo: Dean C.K. Cox)

A senior Turkish minister’s call to turn Istanbul’s Hagia Sophia from a museum back into a mosque is stoking a dispute between Turkey’s Islamist-rooted government and the country’s Orthodox Christian community.

“We do hope that the Turkish government will reconsider and have to think very seriously,” warned Metropolitan Genadios of Sassima, a senior official in the Ecumenical Patriarchate of Constantinople, one of the world’s 14 autocephalous Orthodox Christian communities.

For over 900 years, Hagia Sophia (“Holy Wisdom” in Greek), built in 537, was Christendom’s most important church. But when Constantinople (as Istanbul was then called), fell to the Ottomans in 1453, it became a mosque, and for nearly 500 years it ranked among the Ottoman Empire’s grandest places of worship. In 1935, the founders of Turkey’s secular republic transformed Hagia Sophia into a museum.

The iconic building continues to carry important political significance. “The Islamists have always aspired for it to be a mosque,” while Turkish secularists want it to remain “a neutral place,” and Christians see it as a church, noted İştar Gözaydin, a professor of law and politics at Istanbul’s Doğuş University, and an expert on the relationship between the state and religion.

Until Turkey’s governing Justice and Development Party (AKP) came to power in 2003, the chances of Hagia Sophia reverting to a mosque were slim to none. But with the country’s Islamic heritage now experiencing a revival after decades of government-imposed secularism,  the prospect is not entirely unlikely.

On a November 16 trip to Hagia Sophia, Deputy Prime Minister Bülent Arınç, who oversees policy toward historical buildings that once belonged to religious minorities, declared to television reporters that “[t]he days of a mosque being a museum are over.”

With the country heading into an 18-month election-cycle in 2014, politics are believed to have motivated Arınc’s statements. In campaign speeches for next March’s municipal elections, Prime Minister Recep Tayyip Erdoğan is drawing heavily on the country’s Ottoman past. The message is aimed at both religious and nationalist voters, key AKP constituencies.

The strategy could well prove a vote-winner.

“God willing, it will be a mosque,” said one teenager, leaving Hagia Sophia recently. “Fatih Sultan Mehmet wanted this. When he conquered Istanbul, the first thing he did was to convert it into a mosque. That's why it should be a mosque again.”

Deputy Prime Minister Arınc has the reputation of a political maverick, a man prone to making incendiary statements that are not always followed up on by the government. But the fact that Arınc’s name also has been linked to the mosque-makeover of two other church-museums also named Hagia Sophia (in Iznik and Trabzon) means that even the mention of a similar fate for Istanbul’s Hagia Sophia has sparked alarm among the Ecumenical Patriarchate in Istanbul.

“We are surprised and not surprised with this statement,” said Metropolitan Genadios of Sassima, in reference to Arınc’s comments. “I don’t want to believe our Turkish authorities said this in a concrete way or that they realized the consequences of this decision to open Hagia Sophia as a place of worship [for Muslims]. Hagia Sophia, for Christians and [the] Orthodox . . . represents for us a monument of Christianity.”

The Orthodox Church has powerful international allies, and a visit to Ecumenical Patriarch Bartholomew often features on the itineraries of visiting foreign leaders and ministers.

In the coming months and years, some observers believe the status of Hagia Sophia will become part of a wider controversy between Greece and Turkey over religious freedom. The Turkish government is increasingly challenging Athens over what it sees as restrictions put on the religious practices of Greece’s tiny Turkish minority, believed to make up most of the country’s miniscule Muslim minority of roughly 100,000 people. Ankara has retaliated by refusing to reopen the Halki, a Greek Orthodox seminary near Istanbul, which was expected to reopen as part of a broad democratization package announced in October.

Greece, which sees Byzantium as part of its cultural heritage, declared last month that statements “about converting Byzantine Christian churches into mosques are offending the religious feelings of millions of Christians.”

Officials in Ankara scoff at such statements as hypocritical. “Athens is in no position to question us, considering Athens is the only capital in Europe that does not have a mosque, even though there is a large Muslim community [in Athens],” said foreign ministry spokesperson Levent Gümrükçü.