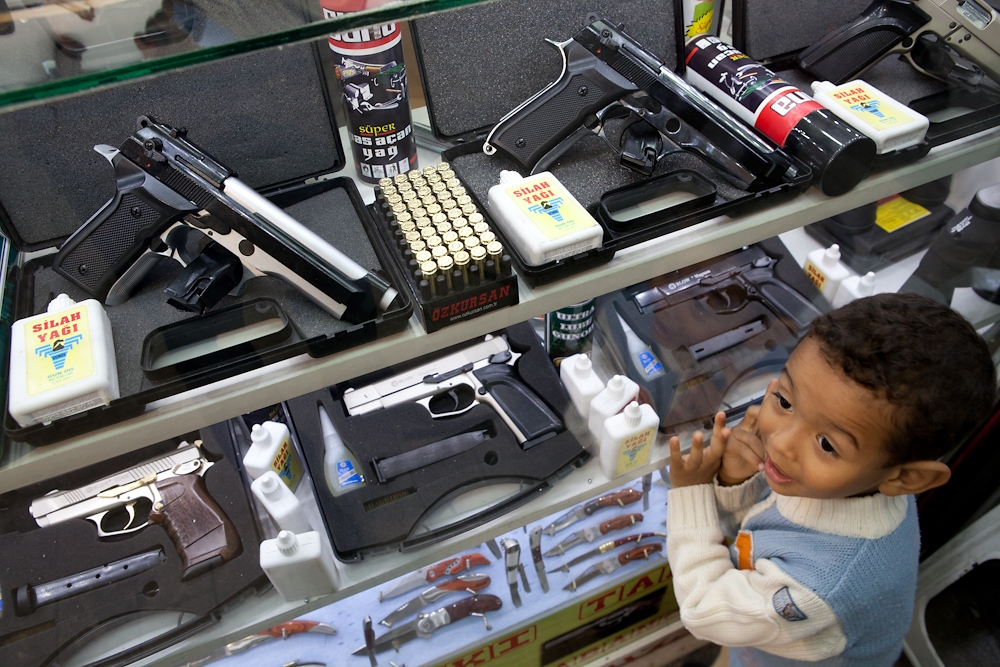 A boy plays next to a case displaying air guns and handguns that shoot blanks. 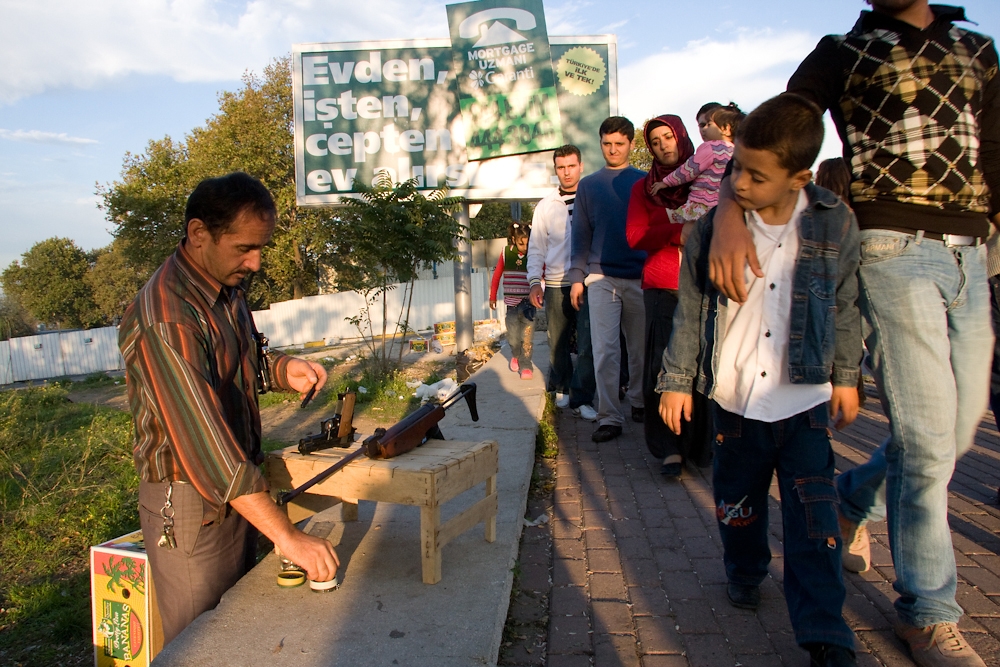 Throughout many of the parks in Istanbul target-practice shooting stalls entice gun enthusiasts. 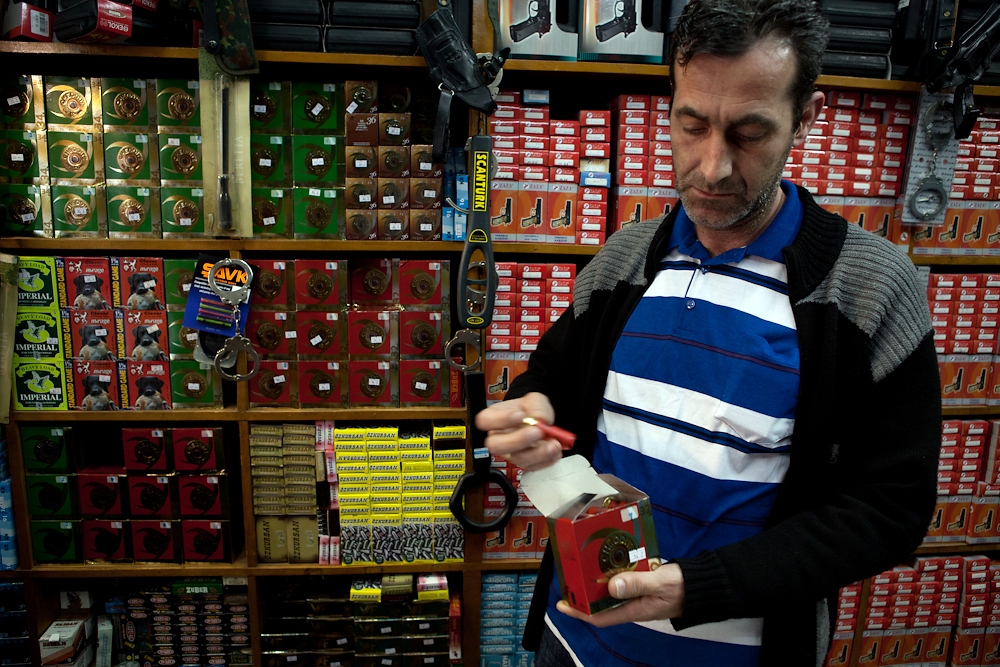 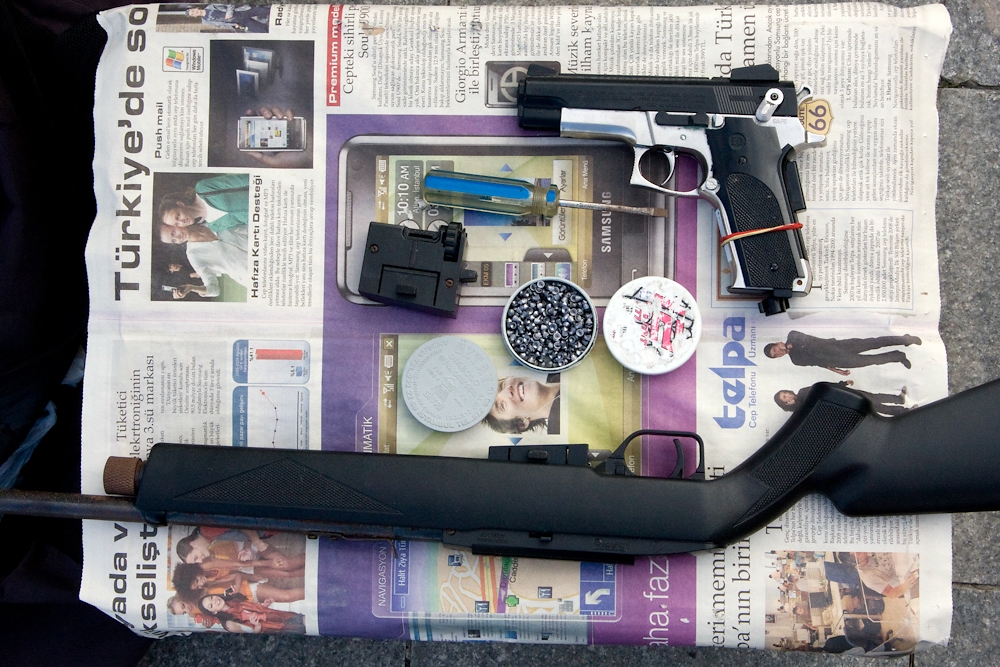 Pellet rifles and handguns are available for fun target practice along the Bosphorus seashore. 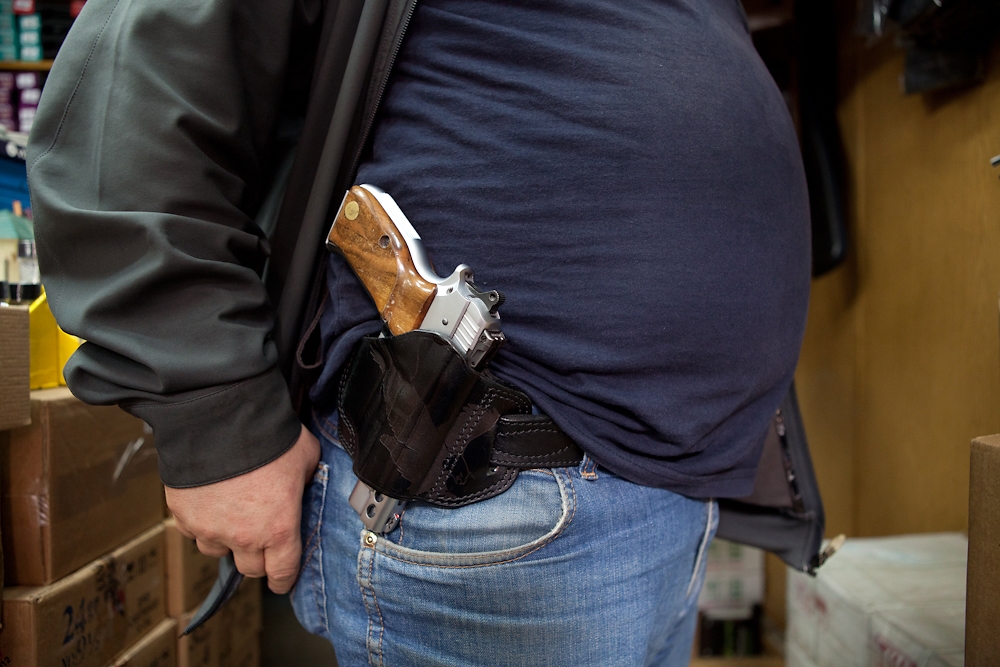 Because he owns a gun shop, Serdar is allowed to carry his own handgun openly. 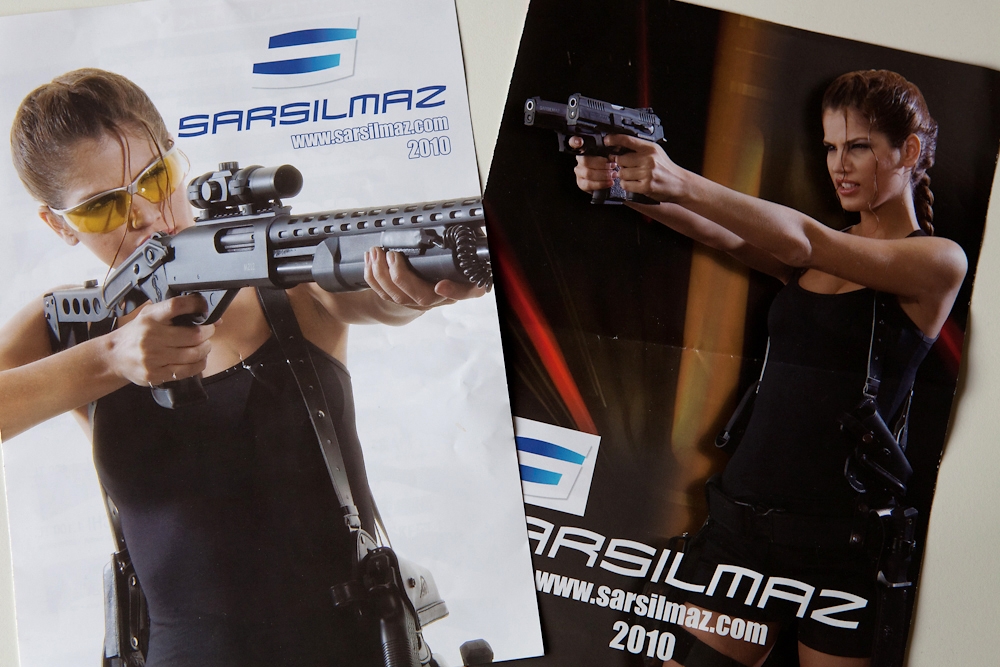 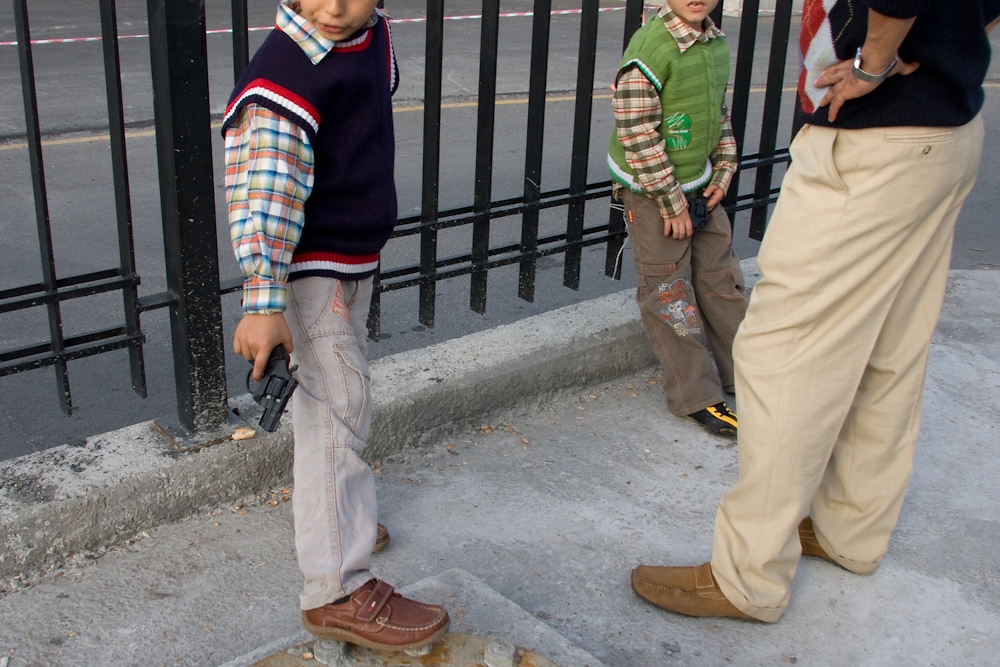 Toy guns are an accepted present for young children to play with at home and on the streets. 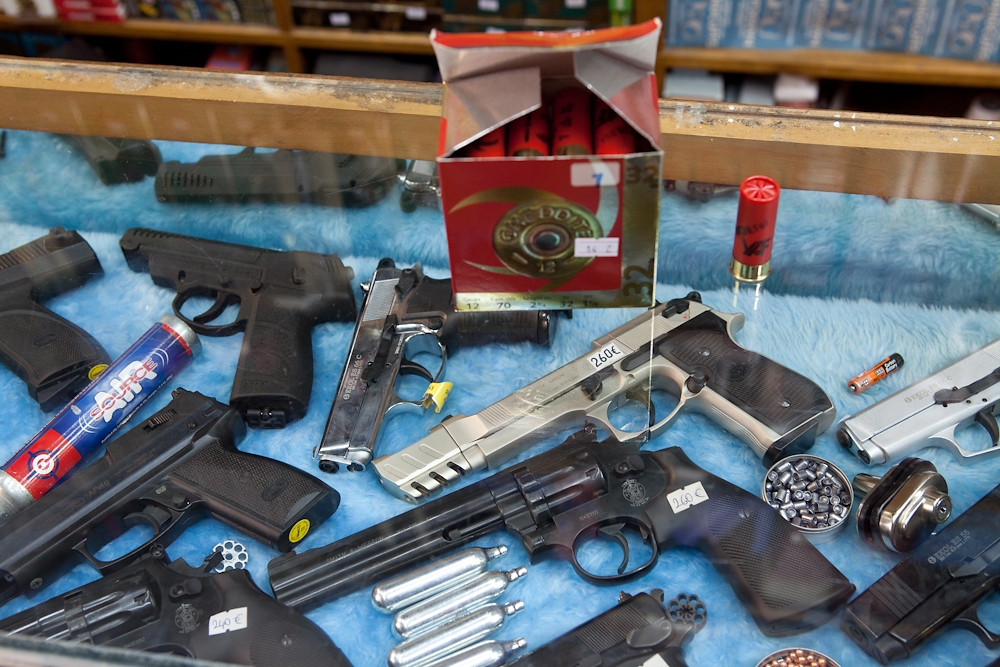 Many of the shops sell blank-firing replicas or air pistols; indistinguishable from a real weapon. 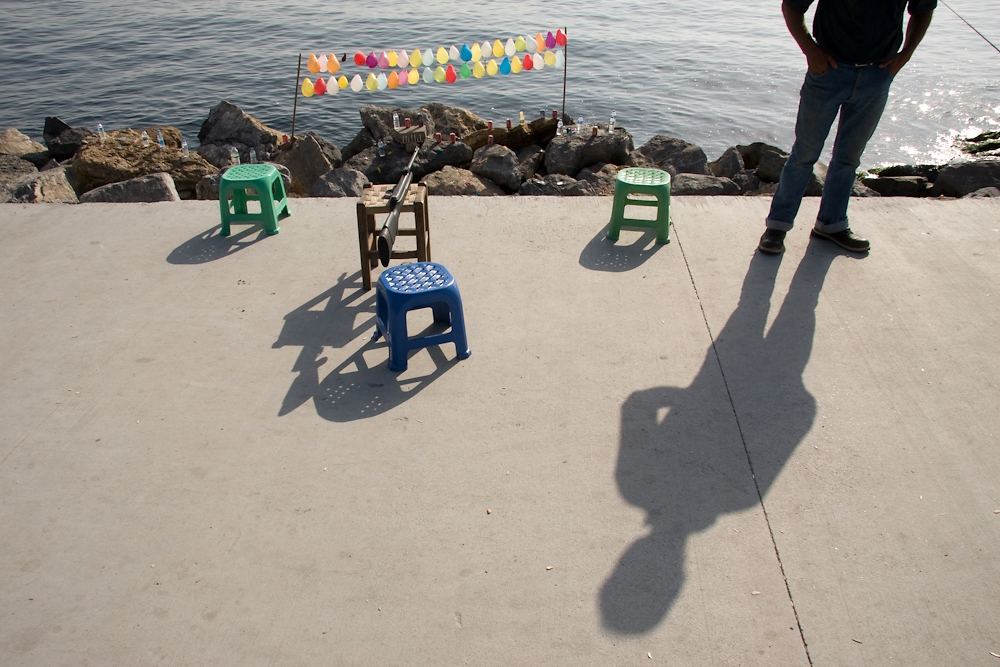 Balloons, bottles and cans are lined up for passersby to take practice shots with pellet guns. 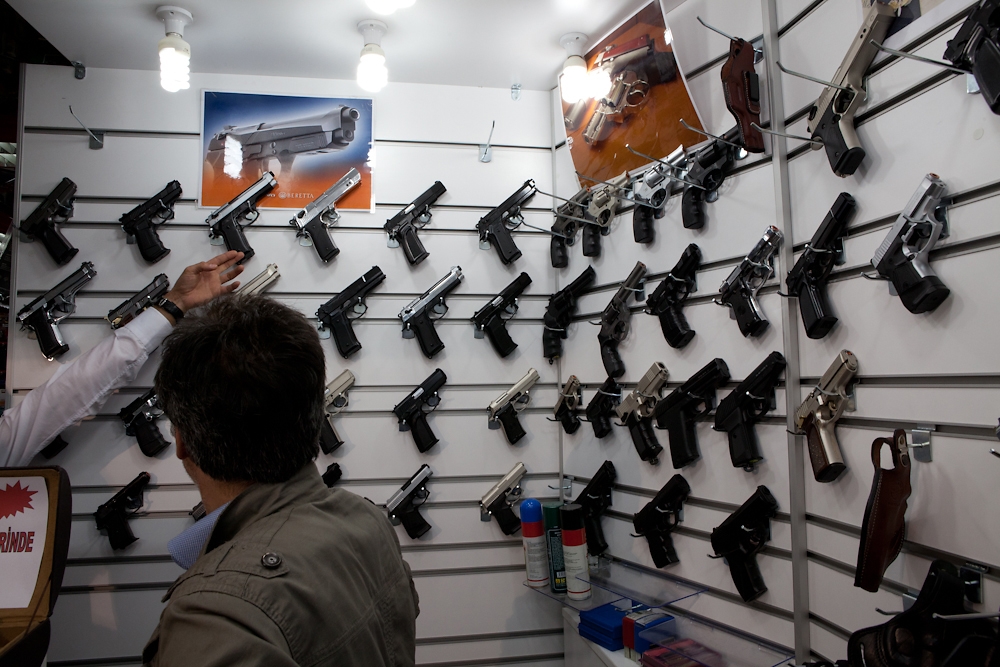 A gun store salesman shows off the weapons for sale in Istanbul.
prev
next

Following the June 12 parliamentary elections, it may become harder to have a drink in Turkey but still relatively easy to fire a gun.

The governing Justice and Development Party (AKP), a political organization rooted in moderate Islam, supports a measure that would increase the drinking age nationwide from 18 to 24. At the same time, the party has helped to squash efforts to tighten gun ownership rules.

The AKP is expected to retain control of parliament following the upcoming elections. According to the owners of bars and liquor stores in Istanbul and elsewhere, it is the size of the victory margin that will be a key factor in determining whether the drinking-age measure moves forward. Whereas in the past such a change would have seemed unthinkable, observers now believe the AKP may end up with a sufficiently large electoral margin that it will feel secure in pushing the measure through.

Already in March a legal change prohibited anyone under 24 from attending events where alcohol sponsorship is present. This change effectively eliminated most domestic alcohol sponsorship of events, and led to the awkward sight of Sebastian Vettel, the 23-year-old winner of this May’s Turkish Formula One race, clutching a de-labelled bottle of champagne that he had been cautioned not to drink from.

One liquor store owner in the Beyoglu District of Istanbul, an area frequented by foreign tourists, voiced alarm over the proposed drinking-age change, seeing it as a step toward outright prohibition. “With this new law they’re [AKP leaders] taking Turkey to the point where alcohol will be illegal. This is the belief system of the AKP. They are looking at the world through a narrow window,” he said, speaking on condition of anonymity.

A bar owner in Istanbul’s lively Nevizade Sokak believes that the 24-year drinking age limit would only be put in place for Turks, and would not be enforced on foreigners. An estimated 29 million foreign tourists visit Turkey every year, spending an estimated $20 billion annually.

A foreigner who operates a bar in the southwestern tourist resort of Kusadasi stressed that up to half of all visitors to the town fall within the 18-to-24 age bracket: “Any change would be devastating to the local economy here” he said in an interview. “If this age group can’t drink in Turkey, they’ll go somewhere else instead; Greece, Spain or even Egypt! It will be no fun for anyone working in Turkish tourism.”

The AKP’s interest in increasing the drinking age contrasts sharply with its efforts to water down a gun-control initiative. The centerpiece of that effort was a bill to raise the legal age for gun ownership to 25. The initiative stalled in a parliamentary committee, and so it appears that the age requirement will remain at 21 for handguns and 18 for shotguns.

Gun-control advocates say easy access to firearms leads to numerous preventable deaths. For example, currently an average of five women per day are being murdered in domestic violence cases in Turkey, and their killers use guns in 95 percent of the time. “Guns are seen as an easy way to solve your problems,” said Berna Capcioglu Pehlevan, an activist with the anti-gun lobby group Hope Foundation.

According to Hope Foundation data, the number of gun-related deaths in Turkey is climbing at a disconcerting rate – from 3,000 in 2008 to a projected 4,500 this year. “Traditionally men have identified themselves through their guns, their horses and women. Unfortunately the only thing that has changed in Turkey is that cars have replaced horses,” Pehlevan said, adding that her non-governmental organization would continue to press for gun reform.

Injecting another element of urgency to reform efforts, Hope Foundation experts say the number of guns in Turkey has risen exponentially in the last decade – from roughly 1 million to 8.5 million. And approximately 70 percent of the current total comprises illegal weapons.