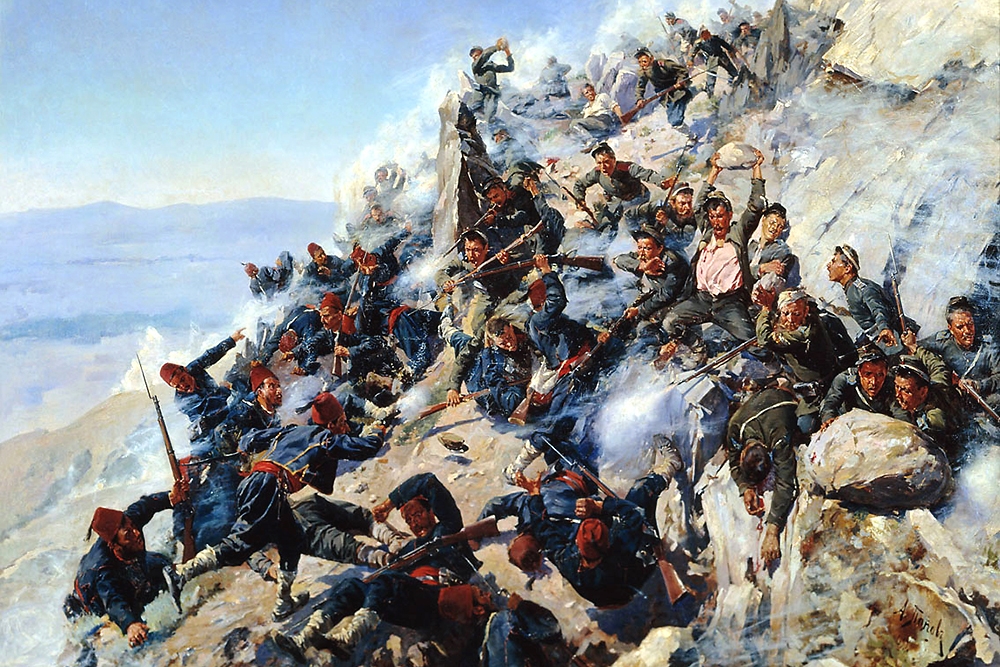 Russia and Turkey have fought more than a dozen wars between each other since the mid 16th century. (Painting by Alexey Popov)

A long history of mutual enmity is exacerbating tension between Turkey and Russia. Leaders in both countries are apt to view their current hostilities through the prism of a bitterly contested imperial past.

“There is a good old, nasty feeling between those countries,” observed Turkish historian Ayhan Aktar of Istanbul’s Bilgi University. “There have been over the centuries several military encounters, [and] Turkey lost all of them. And then there was the Cold War against [the] Soviet Union, but for Turks it was always the Russians.”

Over the past 500 years, Russians and Turks have fought 12 wars, the first in 1568 over the Astrakhan khanate, located where the Volga River flows into the Caspian Sea. The last was during World War I, a conflict that hastened the collapse of both empires.

Now, the bad blood produced by past conflicts is again bubbling to the surface, catalyzed by Turkey’s November shoot-down of a Russian military jet that was on a mission targeting Ankara-backed Syrian rebels. The Kremlin’s recent decision to deploy some of Russia’s most sophisticated fighters and bombers to a Russian military base in Armenia, a country with which Ankara has no diplomatic relations, has significantly raised tension.

In Turkey, nearly every military and political mishap is now blamed on Moscow – from the defeat of Syrian rebels backed by Turkey to the February 21 expulsion of a senior Turkish diplomat from Bulgaria, a country which Tsarist Russia liberated from Ottoman control.

In a 26-city survey conducted by Istanbul’s Kadir Has University last December, 64.7 percent of 1,000 respondents named Russia as the biggest threat to Turkey.

Meanwhile, Russian officials, pro-government media and analysts tend to believe Turkey’s hostility toward Russia’s military actions in Syria, a former Ottoman province, is rooted in Ankara’s “imperial ambitions.” Russian Foreign Ministry spokesperson Maria Zakharova did not hide the contempt that many Russian policymakers have for Turkey’s geopolitical aspirations when she said recently that Turkey should remember that the Ottoman Empire once ranked as “the sick man of Europe.”

Russian officials refer to that label, created by Tsar Nicholas I, “to remind Turkey of its vulnerability and relative weakness compared to Russia,” and to underline the difference between “an aspiring regional power” and “a ‘great power,’ if no longer a superpower,” said Princeton University’s Associate Professor of Near East Studies Michael A. Reynolds, author of “Shattered Empires: The Clash and Collapse of the Ottoman and Russian Empires: 1908-1918.”

But, Reynolds noted, Russia’s own insecurities also play a role in shaping Moscow’s “contempt for Turkey.” Less developed than Europe, Tsarist Russia’s defeats of the Ottoman Empire, as well as Persia, and its takeover of the Caucasus and Central Asia, “served to reassure many Tsarist officials that they represented an advanced European civilization and not a backward and weak ‘Asiatic’ civilization.”

That viewpoint lives on today. Russian President Vladimir Putin’s December remark that the Turks “are not separating themselves [from Russia] just by tomatoes,” in reference to the fruit-and-vegetable boycott Moscow imposed after the shoot-down incident, was a “disparaging reference to the Turks as a nation of vegetable peddlers,” Reynolds said.

Relying on old patterns to explain present-day developments around or in Syria runs a risk for both powers, cautioned Montana State University history professor James Meyer.

“The risk is that people in Russia would allow themselves to be persuaded that ‘neo-Ottomanism’ is real, while in Turkey people would similarly come to see Russian actions in the region simply through the prism of Russian aggression,” wrote Meyer, author of “Turks Across Empires: Marketing Muslim Identity in the Russian-Ottoman Borderlands.”

It is Turkey’s policy toward its Kurdish minority that ultimately could pose a major policy challenge. Pro-government Turkish media is awash with reports that Moscow is providing military assistance to the Syrian Kurdish Democratic Union Party, or PYD. Heightening emotions in Ankara, Turkish officials claim the PYD has connections to Turkey’s rebel Kurdistan Workers Party (PKK). Turkish security forces are currently waging a destructive, wide-ranging campaign against the PKK across Turkey’s predominantly Kurdish southeast.

The big fear now muttered in government circles and their media outlets is that Moscow will end up supporting the PKK as well, warned political consultant Atilla Yeşilada of Global Source Partners.

There is a historical basis for such concerns. In the years leading up to World War I, the Tsarist government extensively backed Kurdish rebels in Anatolia, said historian Reynolds. And during the Cold War, the Soviet government was “often supportive of anti-Turkish Kurdish groups” as a way “to destabilize NATO’s southern flank.”

Both Reynolds and Meyer questioned whether Russian policymakers were placing too much emphasis on history. Both experts maintained that Turkey’s stance on Syria was not influenced heavily by Ottoman “fantasies.” Instead, Turkey’s position was shaped primarily by present-day interests – especially a desire to maintain firm control over its own predominantly Kurdish southeastern regions.

Ironically, it was not that long ago that Russian leader Vladimir Putin and his Turkish counterpart, Recep Tayyip Erdoğan, seemed ready to forge strong strategic ties rooted in energy exports. More broadly, following the collapse of the Soviet Union in 1991, the two countries experienced a rapid rise in trade and social contacts.

“That historical context of … wars between the two empires and all that, well, that was all forgotten for the last 25 years, with a lot of Turks marrying Russians,” Kadir Has’s international relations expert Soli Özel commented. “There are Russians living in Turkey, Turks living in Russia … and I really feel very saddened by the fact that what was built up over [the] last 25 years … is now also being destroyed by Putin.”

Clinging to memories of better bilateral times, Turkish Prime Minister Ahmet Davutoğlu predicted on February 23 that Russian tourists would not “give up on Turkey.” Despite the official Russian boycott on charter vacations in Turkey, he said they (Russian tourists) will “find a way and come.”

In a video interview with Pravda.ru, one Russian historian echoed Özel’s dismay. “For most of the population, those 12 Russo-Turkish wars … [are] far-off history that no one takes as relevant for today,” said Moscow State University’s Oleg Airapetov.

Hopes of any rapprochement in the near future seem unlikely. Humiliated by the shoot-down incident, “Putin seems to really want to hurt Erdoğan,” said one Turkey-based Western diplomat, who requested anonymity because he was not authorized to discuss the topic.

On February 23, the European Union’s foreign policy boss, Federica Mogherini, warned that “a hot war” between Russia and Turkey over Syria was possible.

Meyer is among those analysts who believe it is crucial for present-day Russian and Turkish policymakers to maintain a levelheaded view of the past. “Once people – particularly those in positions of influence – actually begin to believe that conflict is deriving from age-old rivalries, rather than more malleable sets of present-day interests … conflict begins to appear inevitable,” Meyer said.

Dorian Jones is a freelance reporter based in Istanbul. Elizabeth Owen is EurasiaNet’s Caucasus/Turkey news editor in Tbilisi.