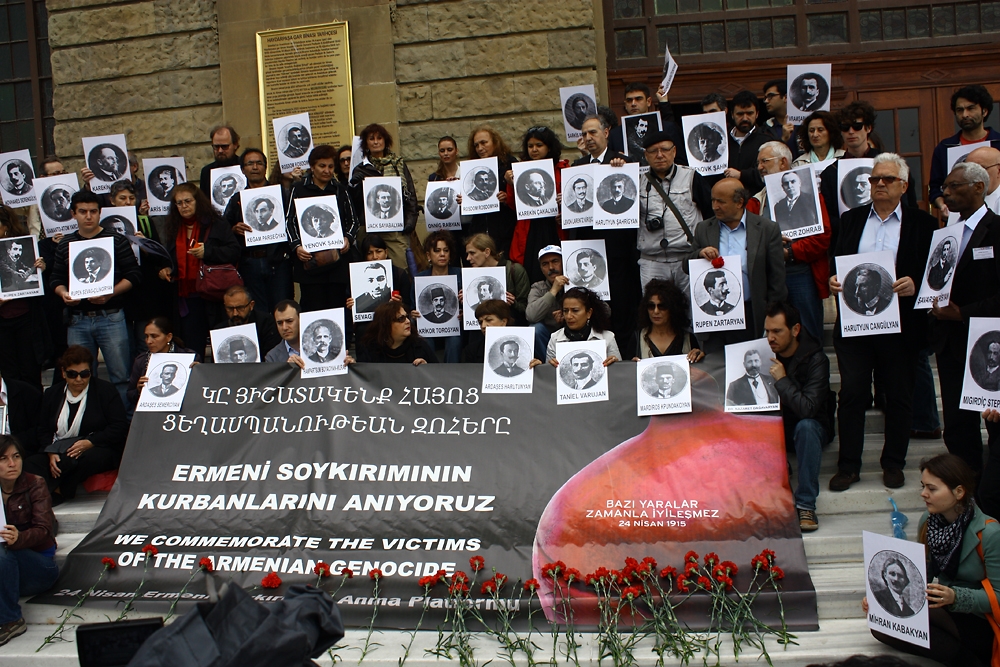 Will the Turkish government's condolences be enough for Turkish-Armenian reconciliation? (Photo: Joshua Kucera.)

Turkish-Armenians are welcoming Prime Minister Recep Tayyip Erdoğan's offer of “condolences” for the mass killings of Armenian that began 99 years ago during the Ottoman era. But opinions are mixed as to whether Erdoğan’s words will lead to renewed action toward reconciliation.

Erdoğan’s comments on April 23 stopped well short of acknowledging that the deaths of between 600,000 and 1.5 million Armenians in 1915 constituted genocide, an admission that the Armenian government has sought since the country gained independence in 1991. Erdoğan framed the tragedy, as Turkish officials have traditionally done, as occurring amid the chaos of World War I – a period when Ottoman citizens of every nationality were dying in large numbers.

Nevertheless, both the timing and the substance of Erdoğan’s comments took many in Turkey by surprise. Armenians mark April 24 as Genocide Remembrance Day. “It's a turning point in history,” said Yildiz Onen, an Armenian activist in Istanbul who was one of the speakers at a small ceremony on April 24 at the Heydarpasa train station in the city. It was from that station that Ottoman authorities expelled more than 200 Armenian intellectuals from the city on April 24, 1915, a step that Armenians now mark as the beginning of the genocide.

“It's a big change,” said Garo Paylan, a member of the central committee of the Peoples' Democratic Party of Turkey. “They say that they are sorry about what happened, that was the most important thing in the statement.”

Not all the speakers at the Istanbul ceremony were impressed by Erdoğan's words. Turkey needs to “move beyond empty condolences and to take steps toward the acknowledgment, recognition, and restitution of the Armenian genocide,” said Raffi Hovannisian, an Armenian politician and former presidential candidate. The fact that Hovannisian could complain in public, at an event commemorating the 1915 tragedy, is in itself a sign of significant change in Turkey. In 2005, novelist Orhan Pamuk was charged under the notorious Article 301 of the Turkish penal code with supposedly “insulting Turkishness” when he said in an interview with a Swiss magazine that “a million Armenians were murdered.” A year later, another novelist, Elif Shafak, was charged under the same provision for addressing the genocide in her book, The Bastard of Istanbul. (Neither was convicted).

Turks have begun taking responsibility for what happened in 1915, and the government is following, Onen said. “Turkish society is changing. They are putting pressure on the government about the Armenian genocide,” Onen added.

Erdoğan's government in recent years has cracked down on media and free speech, especially on individuals and news outlets critical of his government. Yet it has at the same time created more space for debate on what had been sensitive nationalist questions like the status of Armenians and Kurds. For decades, Turkey's government espoused a “national narrative that shaped an entire worldview around WWI ... of threat and betrayal by outsiders and by inside traitors like the Armenians,” Jenny White, a visiting professor at Stockholm University’s Institute for Turkish Studies, said in an email interview with EurasiaNet.org.

“The AKP [Erdoğan's Justice and Development Party] abandoned this narrative in favor of a more expansive and global story of Turkey as heir to a world empire with vast, movable borders that embraced former enemies Greece and Armenia and, by extension, minorities in Turkey,” White continued.

Erdoğan’s new narrative, however, has been challenged in recent months by the prime minister’s crackdown on critical media and the revival of the “rhetoric of fear and betrayal by outsiders and disloyal insiders.” Erdoğan's statement about the events of 1915 marks a possible attempt to reset the narrative concerning a more globalized Turkey. “[It’s] a big and positive step,” White said.

The prime minister’s comments even gave backhanded praise to his government’s critics. “In Turkey, expressing different opinions and thoughts freely on the events of 1915 is the requirement of a pluralistic perspective, as well as of a culture of democracy and modernity,” the statement said. “Some may perceive this climate of freedom in Turkey as an opportunity to express accusatory, offensive and even provocative assertions and allegations. Even so, if this will enable us to better understand historical issues with their legal aspects and to transform resentment to friendship again, it is natural to approach different discourses with empathy and tolerance and expect a similar attitude from all sides.”

The milestone in opening up discussion of Armenian issues, Onen said, was the 2007 murder of the Armenian newspaper editor Hrant Dink by a teenage Turkish nationalist. At Dink's funeral, an estimated 200,000 people marched, chanting “We are all Armenians.” “Things were opening but the big step, unfortunately, was the funeral,” Onen said.

But the trial of Dink's killers was seen as a farce by both Armenians and by international monitors. Armenian activists in Turkey say that Erdoğan should back up his conciliatory words with action to call to account members of the security forces who are believed to be complicit in Dink’s murder. “If he does that, we'll see that the speech is sincere,” Paylan said.

With a year to go before the centennial of 1915 killings, pressure is already building on Turkey to take positive PR steps. Yet, how much farther the Turkish government can go on the genocide issue remains unclear. Ankara's situation is complicated by internal and external politics. Turkey's next general elections are scheduled for June 2015, meaning the 100th anniversary events will come in the middle of what could well be a contentious political campaign. Acknowledging the Armenian genocide could infuriate Turkish nationalists, a key voting bloc.

Internationally, too, the circumstances are not propitious for dramatic steps to reconcile with Armenians. Turkey abandoned a previous attempt at rapprochement with Armenia in 2010 by saying that it couldn't restore relations until the conflict between Armenia and Turkish ally Azerbaijan was resolved. Turkey has become dependent on Azerbaijani investment, and the crisis in Ukraine has increased the importance of natural gas transit from Azerbaijan to Europe, furthering strengthening Baku's leverage in Ankara.

Hayk Demoian, the chairman of the Armenian Genocide Museum and Institute in Yerevan, said in a statement on the museum's website that “I have to confess that this is an important step, but regretfully not in a direction of revealing the truth, facing the history and enabling reconciliation between Armenian and Turkish peoples.”

Joshua Kucera is a journalist based in Istanbul. He is the editor of EuraisaNet.org's Bug Pit blog.