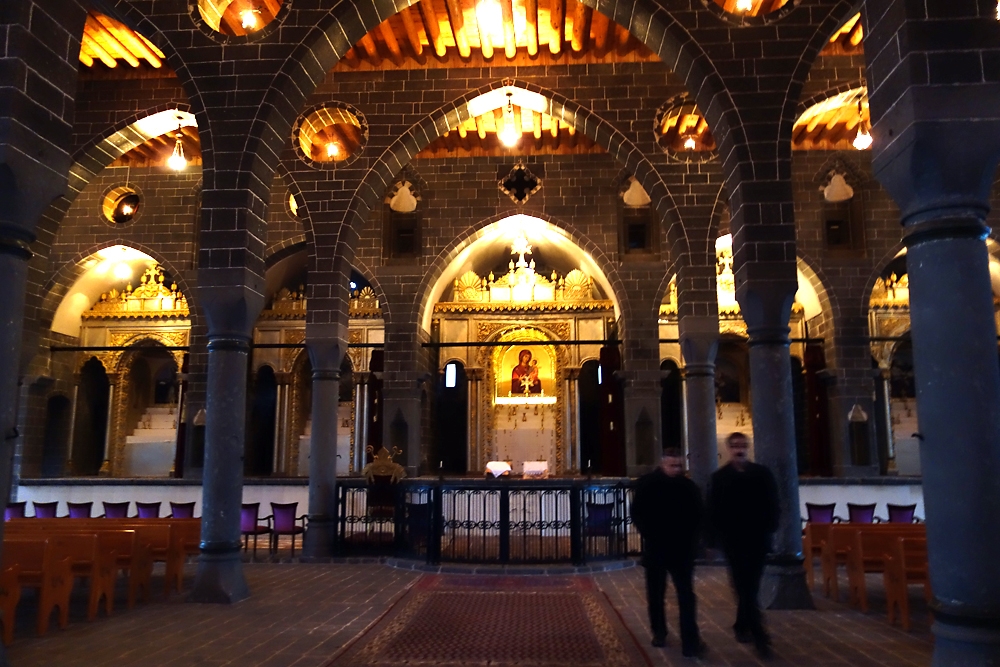 St. Giragos Armenian Apostolic church is located in the back streets of the Sur quarter in Diyarbakır, one of southeastern Turkey’s largest cities. It was derelict and abandoned until restored to its full splendor two years ago, and now serves as a testament to the once large and wealthy ethnic Armenian community that for centuries lived in the city.

“It means everything to me. It is our history, it is our culture and it is our legacy,” proudly declared 60-year-old church caretaker Armen Demircian. “It’s the gift of our ancestors to us. As an Armenian, I can see myself here.”

Demircian’s story is typical for the region’s ethnic Armenians. His grandparents and great-uncles died amid Ottoman Turkey’s 1915 slaughter and expulsion of hundreds of thousands of ethnic Armenians. Officials in Armenia are pushing for international recognition of the events as genocide; the Turkish government links the events to World War I, rather than to a genocide policy.

During the bloodshed, a family friend hid Demircian’s father, then five, in a barn. A local Kurdish family brought the boy up; he later married one of the daughters.

Demircian describes his own upbringing as entirely Kurdish. “I was raised as a Kurd, with Kurdish songs, Kurdish traditions,” he recounted. “I knew nothing of my Armenian identity, until an elder in the town explained to me that my father was Armenian and I was Armenian. It was a big shock and I was very confused.”

St. Giragos remained closed for much of the last century, but now is a symbol of the growing self-awareness and confidence among Turkey’s remaining handful of ethnic Armenians. “Before, no one would say it,” Demircian said of the ethnicity of local Armenians, most of whom converted to Islam. “Now, since the church re-opened, many people come here and say; ‘My grandmother or my grandfather was Armenian.’”

City government worker Melike Günal is among them. “My closest family always knew about our Armenian identity, but it was something kept within the family,” she recalled after lighting a candle and saying a prayer.

Melike’s father died during the Turkish government’s war against Kurdish militant separatists in the 1990s; a brutal campaign that also took the lives of many civilians.

The Kurds’ struggle for greater minority rights gave an opportunity to ethnic Armenians. “It all came out with the Kurdish struggle for their identity; that opened the door to us,” said one 25-year-old schoolteacher, who, fearing potential retribution because she is a state employee, declined to give her name. “Kurds can’t deny the same rights for us.”

The Turkish government recently began tentatively expanding cultural rights for ethnic Kurds. It also has introduced reforms to ease restrictions on Christian minorities, including returning properties seized by the state, and restoring individual churches, such as nearby Van’s Armenian Holy Cross Church, which are allowed occasional religious services.

The teacher, however, claims greater freedom to express her identity also creates new problems. “When we say we are Armenians, we are not actually Armenians because we don't know anything about the Armenian language, and Armenians single us out” as outsiders, she asserted.

“Are we Kurds? We live as Kurds, but Kurds discriminate against us,” the teacher said. “When we show genuine interest in Islam, we cannot fully integrate and we are discriminated by them as well. Whatever we do, we are always discriminated against.”

The district city council, controlled by the pro-Kurdish Peace and Democracy Party, believes it has a role to play in correcting that trend. It donated 1 million Turkish lira (about $490,557) to finance the re-opening of St. Giragos, a project overseen by the local Surp Giragos Foundation, and has extended similar support to a local Assyrian church and to a synagogue.

“Throughout the years, the Turkish state wanted to turn this region, this area, into a single identity, by not only suppressing Kurds, but all these communities, all these religions and languages,” declared Mayor Abdullah Demirbaş, whose municipality has installed city signs in Turkish, Kurdish and Armenian, as well as published literature in Armenian and provided language courses. “We want to show this diversity can live together.”

For Kurds who also have suffered from repression and restrictions on expressions of their cultural identity, what happened to ethnic Armenians almost a century ago raises uncomfortable questions. Kurds carried out many of the massacres of ethnic Armenians, including in Diyarbakır.

At an opening ceremony this October for a memorial to victims of the region’s ethnic killings, Mayor Demirbaş, “in the name of our ancestors,” apologized on behalf of local Kurds for the killings. St. Giragos caretaker Demircian claims that Kurds now come to the church and apologize to him as well for the bloodshed.

Viewing a small photo exhibit that shows members of Diyarbakır’s former ethnic Armenian community drinking wine and smoking water pipes, a group of teenage boys feels the same. One, Baran Doğan, acknowledges his awareness of “what happened to the Armenians by Kurds under the order of the state.” A close friend’s recent avowal of his Armenian heritage has brought it closer still, he continued.

“When I come to this church with him, I feel it as a small apology although it never can compensate for what they’ve been through,” Doğan said.