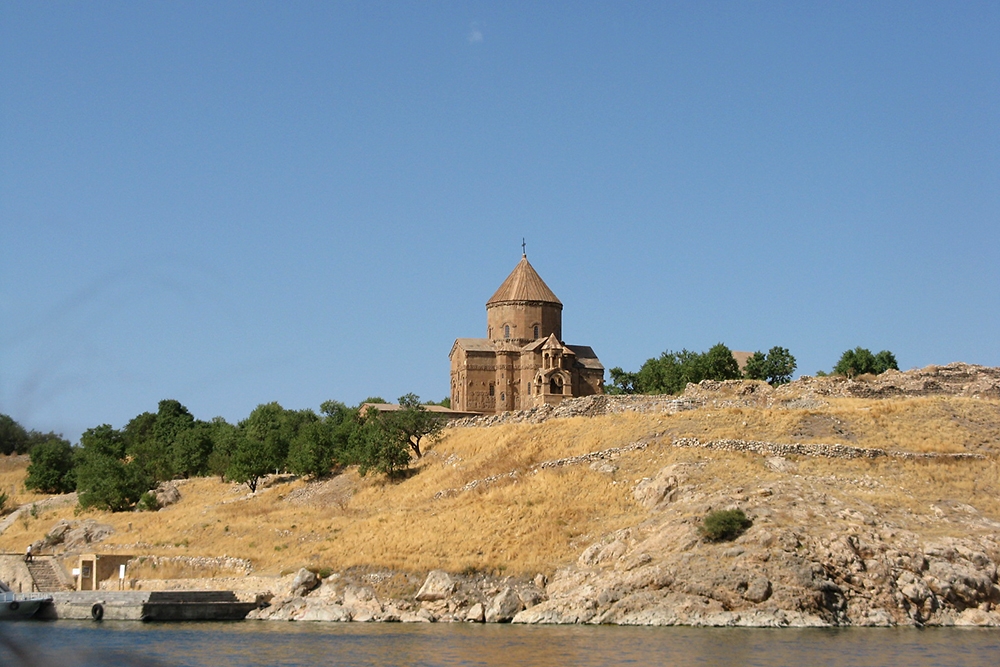 How far can the Armenian Church go to reclaim its losses in Turkey? (Photo: Elizabeth Owen)

In a potentially groundbreaking lawsuit, a branch of the Armenian Apostolic Church is seeking the return of its ancient religious center in Kozan in southeast Turkey.

The Catholicosate of Cilicia, which dates back to 1293, is, along with the Armenian town of Etchmiadzin, one of the two centers of the Armenian Apostolic Church, the world’s first national Christian institution. Turkey’s Ottoman rulers seized the Catholicosate’s property during the pogroms and mass deportations of ethnic Armenians that occurred during World War I – actions much of the world describes as genocide.

“It is the first case of its nature, the return of religious property to the original owners,” said Iştar Gözaydın, a legal consultant to the Catholicosate on the case and former professor of law at Istanbul’s Doğuş University. “We are arguing the Catholicosate has never been extinguished, so this is about the right of religious worship; not only in terms of property, but also in terms of practicing religious worship.”

The case was filed on April 27 by the Armenian Church Catholicosate of Cilicia, based in Beirut, Lebanon, where the Catholicosate settled in 1930 after being forced out of Turkey.

Turkey’s Constitutional Court, which decides on the constitutionality of orders and laws, has not yet decided whether or not to hear the suit, which comes with strong political overtones.

“Now, because of the 100th anniversary of the Armenian genocide, we are doing this,” stated Teni Pirri-Simonian, spokesperson for Catholicos Aram I, leader of the Catholicosate of Cilicia.

Rather than experiencing merely “words” or “memories,” young ethnic Armenians will be able to see “the concrete church,” if the property is returned, predicted Pirri-Simonian, who is coordinating the Church’s actions on the case. “It is our spiritual center. It is the center of our faith, it is the center of our identity.”

The case, she claims, could be just the beginning. “If it leads to a ripple effect, so be it. The Church left [in Turkey] more than a thousand churches in different parishes.”

In an implied reference to the campaign for genocide recognition, the Yerevan-based head of the Armenian Apostolic Church, Catholicos Karekin II, on May 7 called the lawsuit a continuation “of the demand of the rights of the Armenian people,” Armenian Public Radio reported.

“There is now a worldwide effort to develop more and more claims at all levels,” observed political scientist Cengiz Aktar of Istanbul’s Süleyman Şah University. “There are two big groups – one is based in the US and the other in France – who come with extensive records of properties stolen or confiscated.”

After reforms introduced by the Turkish government, some foundations linked to the Armenian Apostolic Church have met with limited success in reclaiming seized properties, mostly in Istanbul.

So far, the Armenian Apostolic Church’s Istanbul Patriarchate, which represents the Church in Turkey, has remained silent on the case, however. “There is [a] certain rivalry between the churches of Armenia and of Turkey,” commented Fatih Gökhan Diler, a reporter at Agos, a bilingual Turkish-Armenian newspaper in Istanbul. “There is not conflict, but they are not always on the same side in these kinds of cases.”

But the Patriarchate’s apparent coolness goes beyond clerical rivalries.

With Turkey in the midst of a campaign for parliamentary elections on June 7, the ruling Justice and Development Party (AKP) also has remained silent on the issue. EurasiaNet.org contacted both the foreign and interior ministries for comment on the Catholicosate’s case, but received no response.

But the mayor of Kozan, Musa Öztürk, an AKP member, is in defiant mood, however. “Not even an iota of land is to be handed over to anyone,” he declared to local reporters in late April.

Öztürk’s assertion is in tune with the increasingly belligerent stance of President Recep Tayyip Erdoğan toward Yerevan. In April, Erdoğan condemned rapprochement efforts with Armenia led by his predecessor, Abdullah Gül, a former party colleague.

The legal road, too, poses challenges for the Catholicosate’s quest. “Turkey has legislated quite a few rules and quite a few laws, which, in the end, provide a means to avoid the demands of the property owners,” warned law professor Gözaydın.

Surprises, though, can be in store. In December 2014, for instance, Turkey’s Supreme Court of Appeals ruled that no statute of limitations exists for an attempt by an American Armenian, Zuart Sudjian, to regain control of family property in the southeast city of Diyarbakir.

Yet even if the Constitutional Court takes a dimmer view and rejects the Catholicosate’s case, the Church’s lawyers have declared they will take it to the European Court of Human Rights (ECHR) in Strasbourg, France.

But success is far from guaranteed. In January, the ECHR ruled against a church foundation reclaiming from the Turkish state a valuable orphanage building in Istanbul. The court dismissed the case on legal technicalities.

Some observers, though, believe this ruling does not bode well for future property claims by ethnic Armenians.

“It is [a] big question how far they can be successful legally in Turkey or before the Strasbourg court,” noted Rıza Türmen, a former judge on the ECHR and current opposition parliamentarian. “These are very difficult cases because it is past history … There are many legal obstacles to be successful because of the time that has lapsed.”

The Constitutional Court’s decision, though, could have implications far beyond that of Kozan.

“There are Armenians all around the world now asking what happened to our families’ property, their homes,” said Pirri-Simonian.