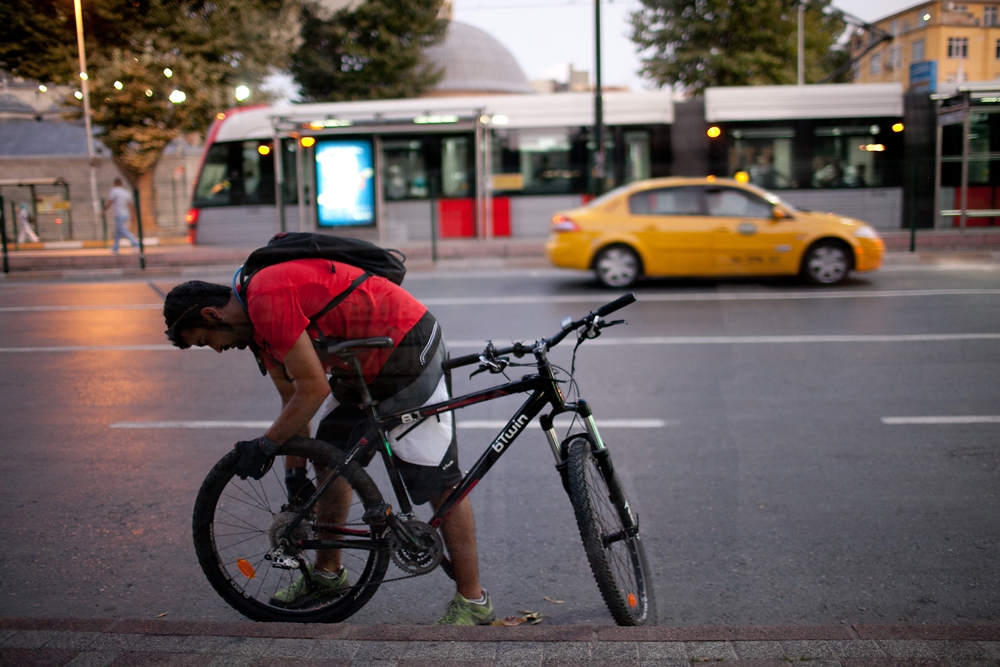 A pedalist works on his mountain bike in Istanbul's Tophane neighborhood before joining the bustling big-city traffic. (Photo: David Trilling)

“Are you crazy?” is a question cyclists in Istanbul often hear. The city’s steep hills, poor roads, and dangerous drivers make it a hair-raising place for anyone on two wheels. But with Istanbul’s roads wracked with gridlock, the city’s cyclists are mounting a campaign to claim a bigger share of the road.

According to the Japan International Cooperation Agency, which completed a transportation master plan for Istanbul in 2009, car traffic in this city of roughly 13 million, one of Europe’s largest metropolitan areas, will nearly quadruple over 15 years.

Once a month, dozens of cyclists gather in Goztepe Park on Istanbul’s Asian side to take to the avenues. They are part of Critical Mass, a worldwide bicycle protest movement whose riders regularly swamp roads, demanding more space -- and more respect -- from drivers.

Another monthly ride started earlier this year at Taksim Square on the European side of the city. For Imre Balanli, a filmmaker who lived for several years in Paris and New York, two cities with their own gridlock problems, the bicycle is the only way to travel. “In Istanbul, you don’t have a good public transportation system, the buses are crowded and they don’t run on a schedule and I don’t want to be stuck in traffic for hours. So, this is really the best way to commute,” Balanli said.

But it can be lonely. Only around 10,000 people cycle regularly in the city, according to the Bicycles Union, a Turkish lobbying group. In New York City there are about half a million cyclists. “If we are visible, then we hope that more people will start riding bicycles,” said Balanli. “Whatever it takes, this is our right and we should be able to do it safely.”

PepsiCo employee Erkal Hascan experienced the dangers of Istanbul’s roads the hard way. Last year, he started cycling to work, around 45 minutes each way. “Other drivers on the motorway act as if they don’t see you. You are a ghost,” Hascan said.

After two months of riding, he was left lying on the asphalt with a broken collarbone. A bus had swerved unexpectedly in front of him and forced him to veer sharply, throwing him over his handlebars. “Did any driver stop?” he recounted, speaking in English. “They just honked their horns: ‘Come on! Stand up and get out of the road!’”

Part of the problem, say enthusiasts and analysts, is that few people will cycle on dangerous roads; and with few cyclists, there is little pressure to provide infrastructure to make the roads safer.

The city currently has about 50 kilometers of cycle lanes, including a long stretch along the Asian shore of the Bosphorus that is mainly used for recreational biking.

Murat Suyubatmaz, a former captain of Turkey’s national cycling team, founded the Bicycles Union in 2008 to lobby for better infrastructure. “In Turkey, the love of cycling that stems from people’s childhoods has not disappeared. It is only that fear and safety has held them back from cycling,” Suyubatmaz said. “If the security exists and there are proper bike routes, the bicycle will come back to life.”

There is an urgent need to diversify transportation options. Istanbul has an estimated annual population growth rate of 3.45 percent. Meanwhile, Turkey’s economy posted a growth rate of 11 percent for the first quarter of 2011. This cocktail of growing population and rising prosperity translates into exploding rates of car ownership.

“The future looks somewhat bleak in terms of addressing congestion,” commented Sibel Bulay, director of Turkey’s Center for Sustainable Transport. She believes that although the government is waking up to the problem, vested economic interests are causing the city to continue to expand in a car-dependent fashion.

A planned third bridge over the Bosphorus to the north of Istanbul has made environmentalists and urban planners particularly uncomfortable. The government claims the project will ease dire congestion over the existing bridges by allowing intercontinental traffic to bypass the city, but opponents point out that these vehicles only account for 5 percent of current bridge traffic.

They also fear that the project will encourage urban sprawl that will ultimately devastate the forests to the north of Istanbul. “What really needs to happen is people need to get smarter in their transport choices,” said Bulay.

But even the bicycle’s staunchest advocates acknowledge that Istanbul’s steep hills, sweltering summers and frequently icy winters mean two-wheeled transport cannot provide a complete solution to the city’s congestion crisis. Even so, its supporters are getting more vocal and, according to some, more numerous.

Ozan Bozkurt, who runs a bike shop in the Besiktas neighborhood, says he has seen an increase in both customers and competition in the past two years, and that the roads aren’t as lonely as they once were. “Nearly eight years ago when we ride on the Bosphorus, if we see some biker from the other side, we just shake our hand to say ‘hello.’ Both of us . . . are happy to see each other. But at the moment, we see lots of people.”

He admits to getting a kick from braving the city’s streets in the hope that one day more cyclists will follow him. “In Istanbul, there’s adrenalin. It’s a bit dangerous, but it’s really good.”

Alexander Christie-Miller is a freelance journalist based in Istanbul, where he writes for The Times. David Trilling is EurasiaNet.org’s Central Asia editor.