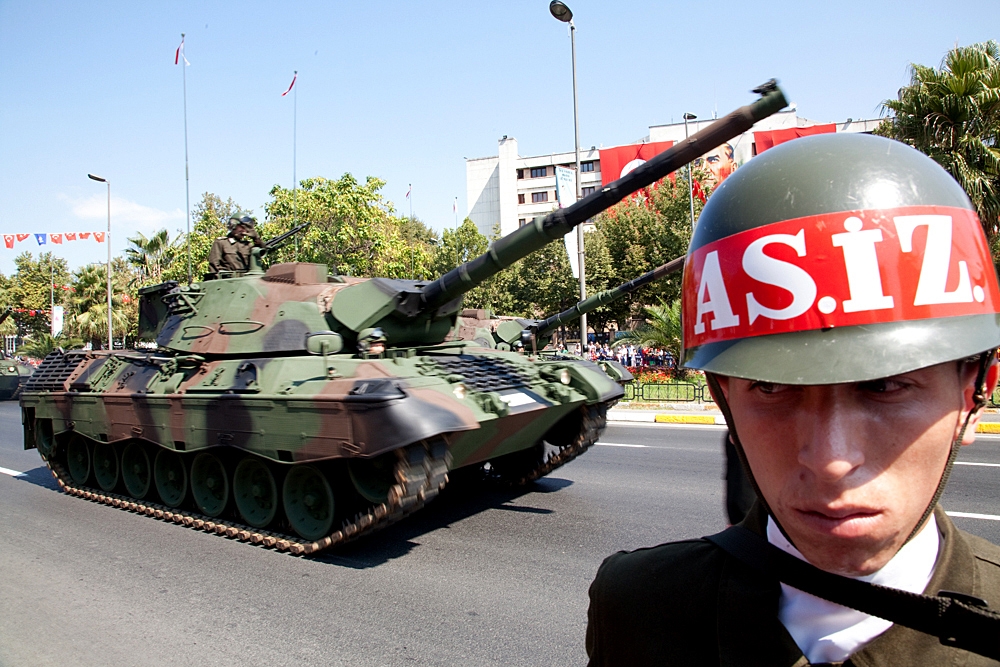 Rampant bullying within the Turkish military is considered the leading cause for the 934 suicides of soldiers that have occurred during the past decade. (Photo: Jonathan Lewis)

For generations, schoolchildren in Turkey learned that “every Turk is a soldier.” Patriotic families still often send their sons off to compulsory military service with a party and a flag-waving procession through their respective towns and villages. But this façade of pride conceals an ugly truth – rampant bullying within the army’s ranks.

According to the Turkish Parliament’s Human Rights Commission, 934 suicides have occurred in the Turkish army over the past decade, many linked to bullying. Until recently, though, few critics dared to speak out.

Last March, dozens of families went to the capital, Ankara, to participate in an anti-bullying rally. Many were parents whose sons had committed suicide, or who had died at the hands of their fellow soldiers. The families demanded justice and that those responsible be tried for their actions.

Among the protestors was Kenan Polat, who runs a small teashop in Istanbul. His 20-year-old son, Murat, died eight years ago doing his compulsory 15-month military service. Kenan and his wife, Gülsen, maintain their son’s room just as he left it. Above the carefully made bed hangs a Turkish flag along with cuttings of newspaper reports about their son’s death.

“He was killed in the barracks by other soldiers. They stomped him to death,” Murat’s mother recounted, sobbing. “His body was completely covered in boot marks. It was terrible. He was accused of stealing and was subjected to this terrible beating as part of an interrogation. It was on the orders of a senior officer. All those involved just received a fine. Is that what my son’s life is worth?”

The Polats have pursued their case through the media and courts. Few people in Turkey, though, have demonstrated such tenacity in publicizing cases.

But that appears to be changing.

Two years ago, after enduring tough times as a conscript, Tolga Islam launched a blog that highlighted army abuse. Such was the response that it quickly evolved into the Platform for Soldiers Rights, a 10-person volunteer organization that helps victims of army abuse petition the Turkish Parliament Human Rights Commission for redress. The Platform is calling for an independent body to investigate abuse claims, and monitor army conditions. “I was really surprised by how many soldiers contacted us for help, as there was very little publicity,” said Islam. “Today we have 1,500 cases, but it’s only the tip of the iceberg.”

Bullying within the Turkish army is institutionalized, he maintains. “There are two kinds of victims. There are those who are abused, and then there are those soldiers who are ordered to carry out this abuse. In some ways, they suffer more, as they are turned into torturers.”

A former conscript who spoke with EurasiaNet.org on condition of anonymity is one such victim. “Violence was a normal way of life in the army -- if you didn't do your duties, or the officers were unhappy with what you did,” he recounted, chain-smoking throughout the interview. “Fellow soldiers on the orders of the officers regularly carried out beatings. Sleep deprivation was also common. And if you later fell asleep on duty, you would be punished again, and so it went on.”

The man is now suing the army for the psychological trauma that he claims to have suffered. He declined to be identified out of fear of reprisals.

Such a legal case would have been unthinkable only a few years ago. Turkey's armed forces were long considered untouchable following the formation of the secular Turkish republic in 1923 by Mustafa Kemal Atatürk, a former general and a hero of World War I. Although the military’s influence has been greatly curtailed in the past few years, a law remains on the books that criminalizes any attempt to undermine the armed forces’ reputation.

The army promises to punish bullying, but detection depends on a soldier reporting it to a senior officer.

These days, calls for change are growing, and are even coming from some former senior officers. “This was the most difficult area I had to tackle,” declared retired Brigadier General Haldun Solmaztürk, who spent much of his career fighting militants belonging to the rebel Kurdistan Workers’ Party. Many Turkish youths are familiar with the culture of bullying before they are drafted, he added.

“The culture of bullying [comes] from the families, from their neighborhood, the factories where they worked,” Solmaztürk continued. “They [new recruits] take it for granted [that they have] the right, the authority, to bully others, who are weaker, who are younger, and who are less able to defend themselves. This is a major problem in Turkish culture, I have to accept this.”

A significant challenge in promoting anti-bullying measures within the ranks is gaining a firm commitment from armed forces chiefs. “They do not recognize the magnitude of the problem,” Solmaztürk said.

Turkey is now facing the likelihood that the issue will become internationalized. After exhausting the legal process in Turkey, the Polat family is taking their case to the European Court of Human Rights. “Until those senior officers responsible for my son’s death are brought to justice and my son is recognized as a martyr, we will not rest,” defiantly stated Kenan Polat. “We want justice for our son’s memory. And we want to make sure that no other parent has to go through what we've experienced.”

In Karabakh deal, as many questions as answers