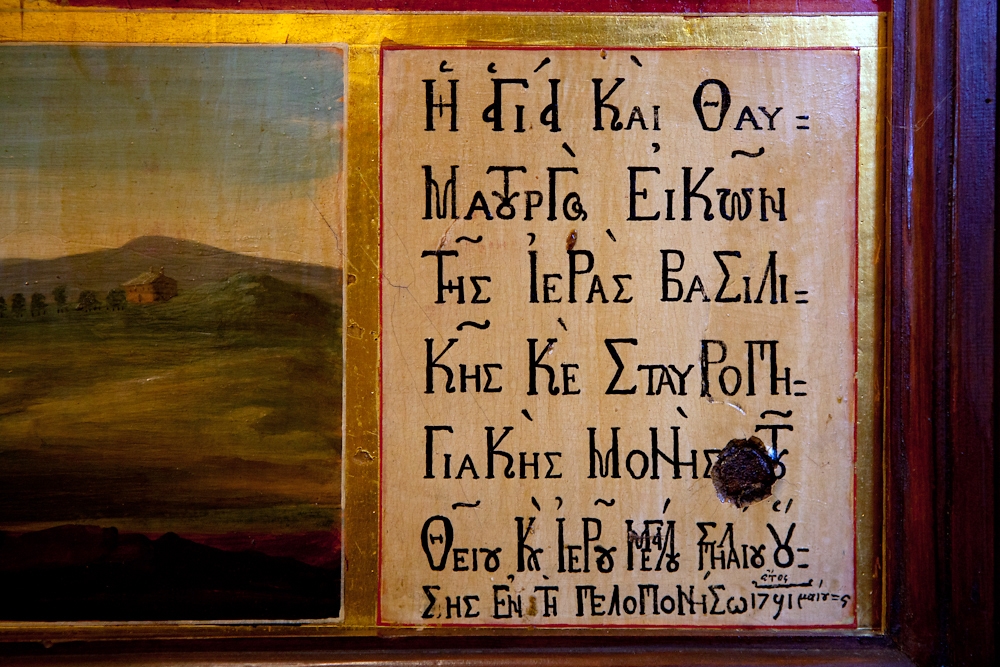 Old script inside the Aya Yorgi Garibi hints to the building's origin as a Greek monastery. 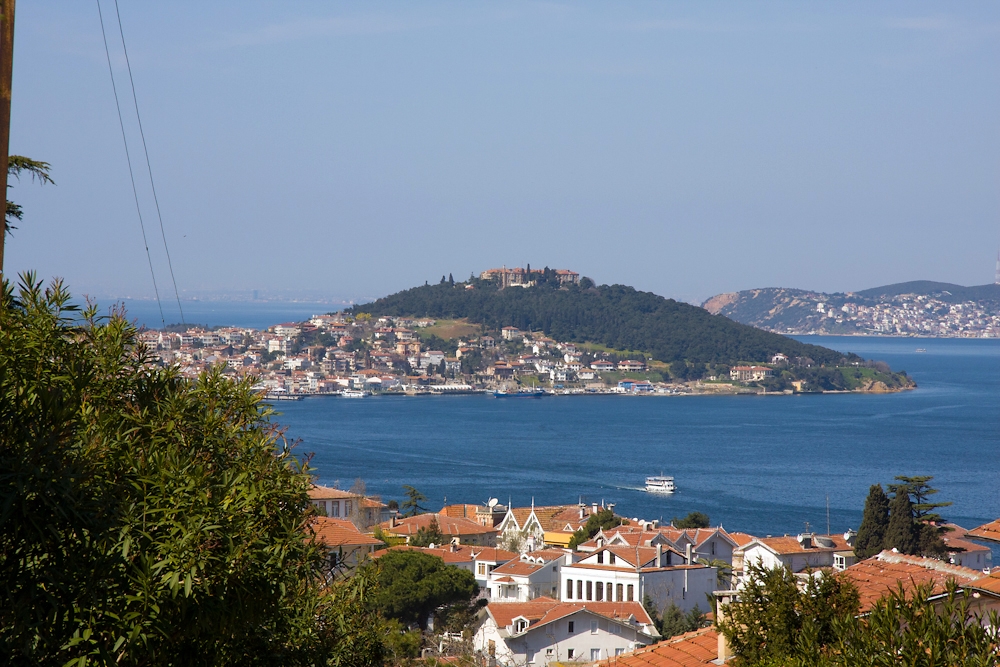 The view from Buyukada to Heybeliada and Burguzada on the horizon. All three are part of the Princes' Islands chain. 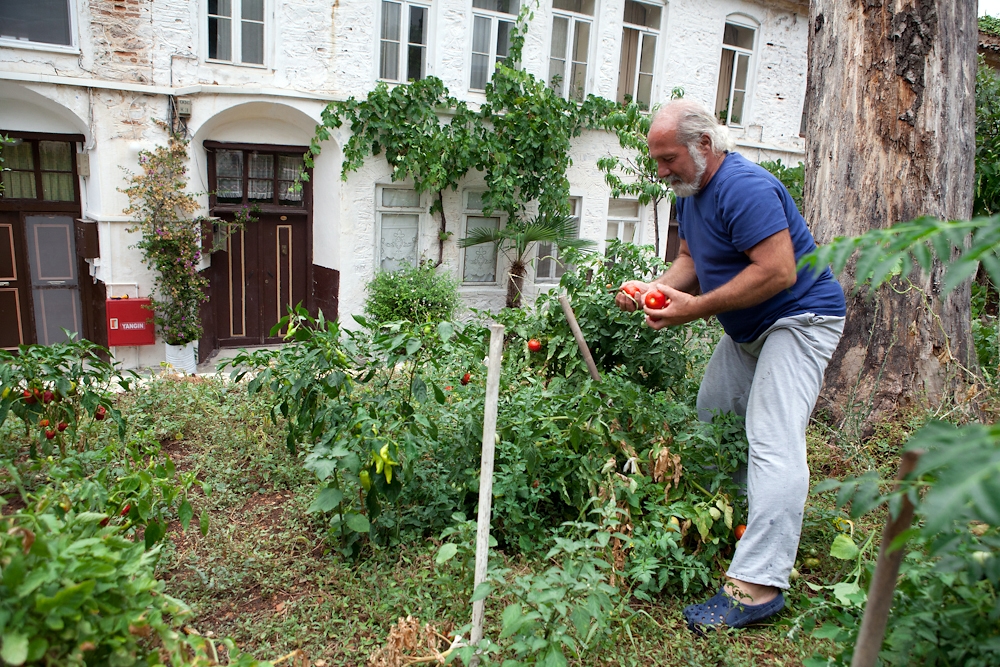 Yorgo Güller, a Greek Christian from Istanbul, agreed to become the caretaker of the monastery in 2004. 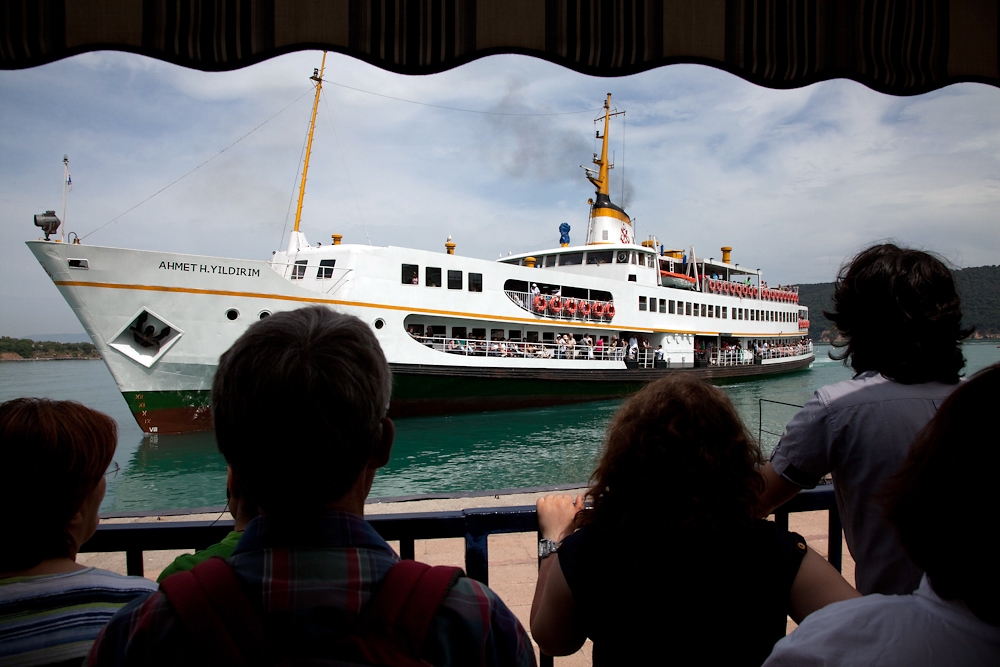 Access to the Princes' Islands, seven miles south of Istanbul, is by one of the 13 ferries servicing the islands daily. 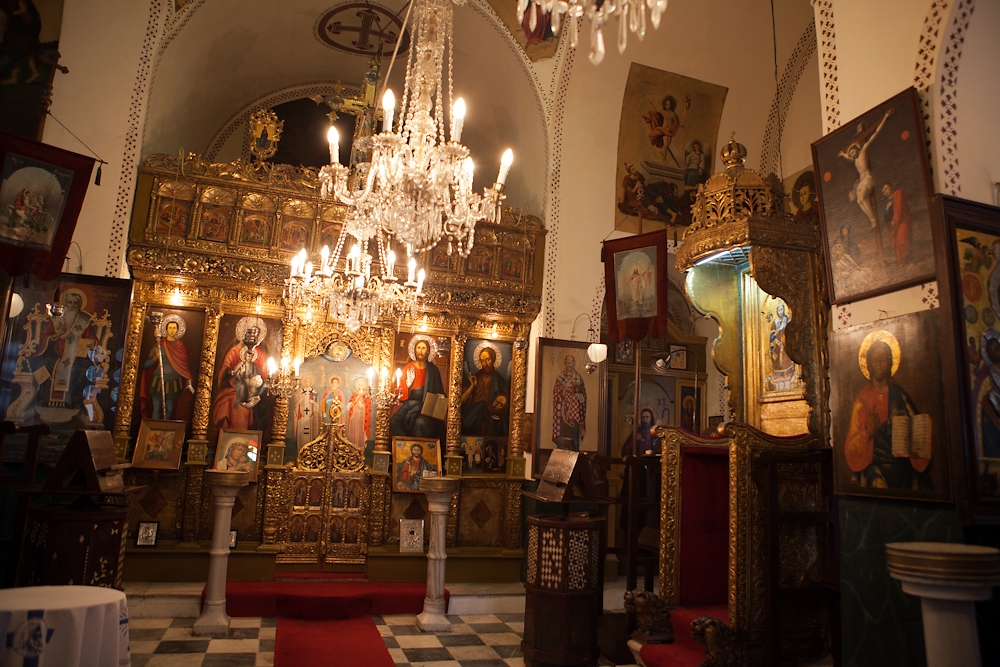 Many of the frescoes in the church were completely remade following the 1999 earthquake. 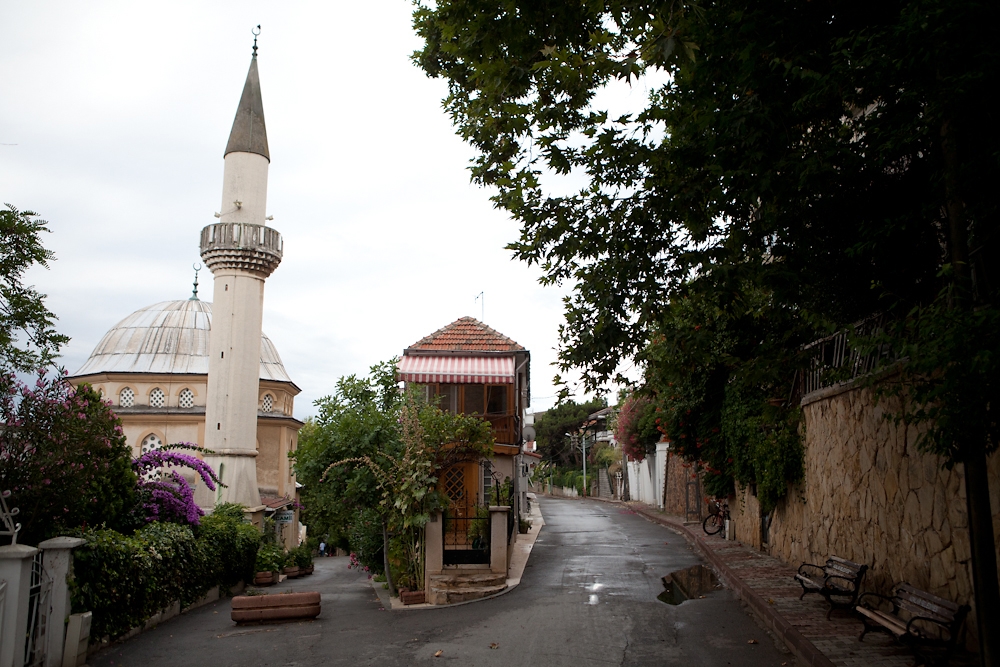 Until the 1950s the islands were inhabited by many of Turkey's ethnic minority groups, such as Armenians and Greeks. 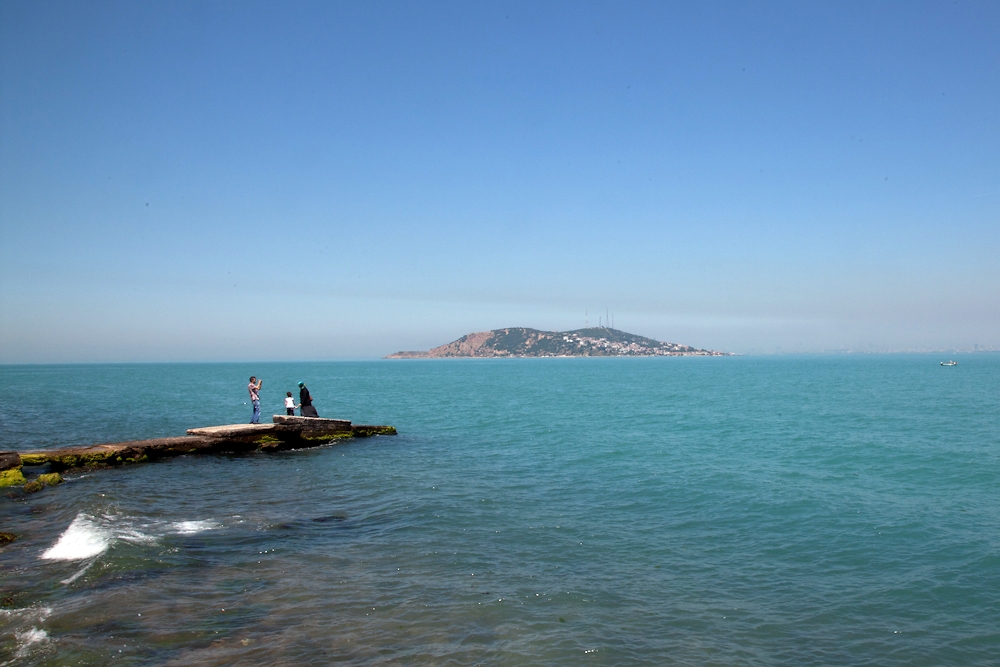 Visitors to Burguzada look across the sea to Kiniliada and Istanbul, covered by smog. 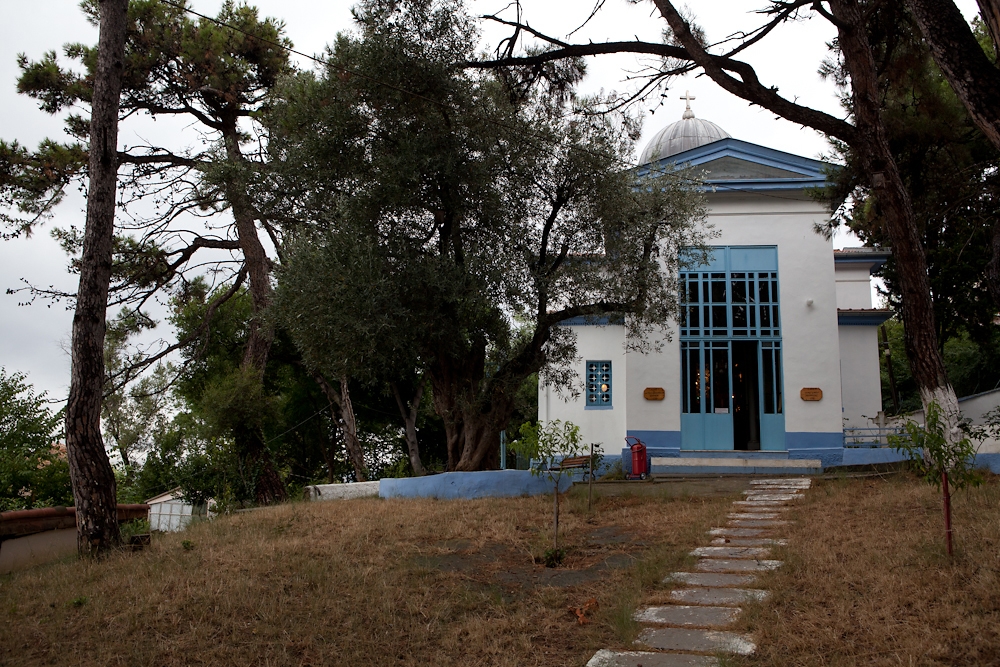 Aya Yorgi Garibi was built in 1728. But after a fire destroyed it, the church was reconstructed a little further up the hill. 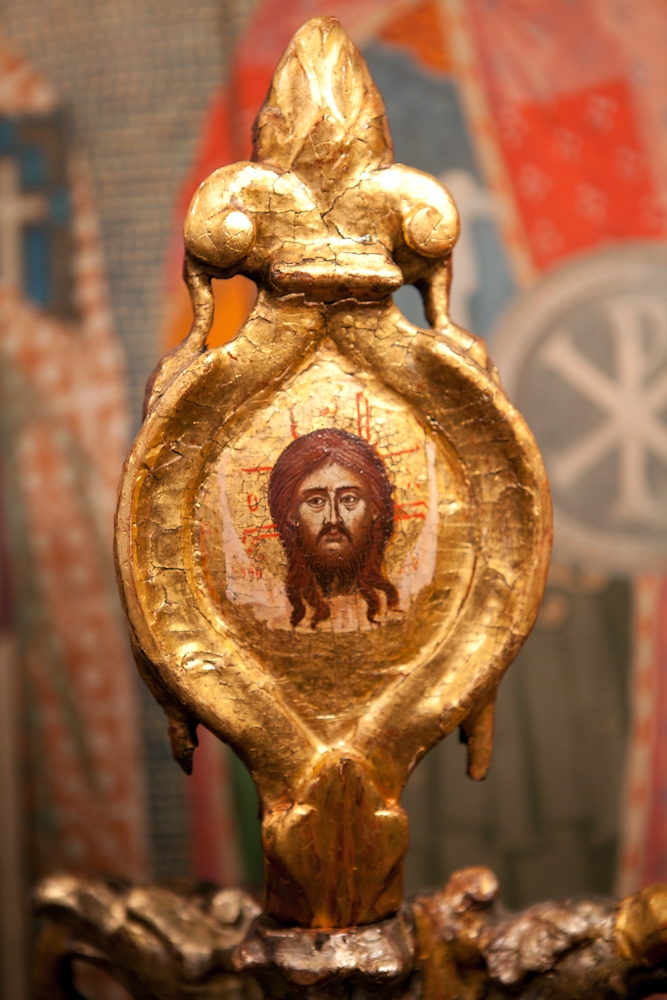 The building that once housed the priests and monks now serves as a summer residence for several Greek families. 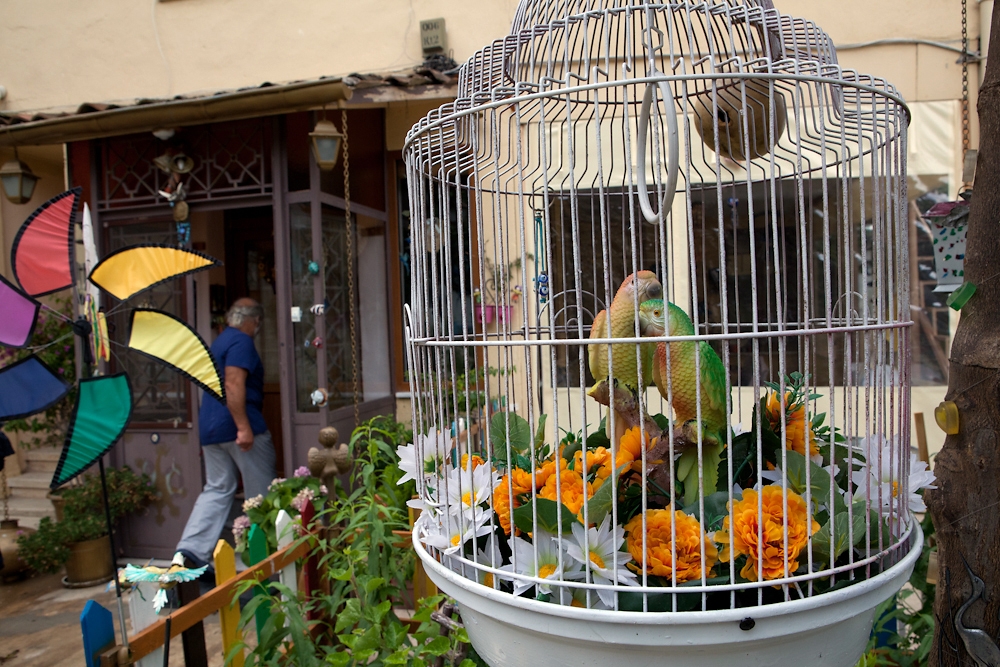 Güller, who was born in 1952, lives with his Muslim wife on the grounds of the monastery. 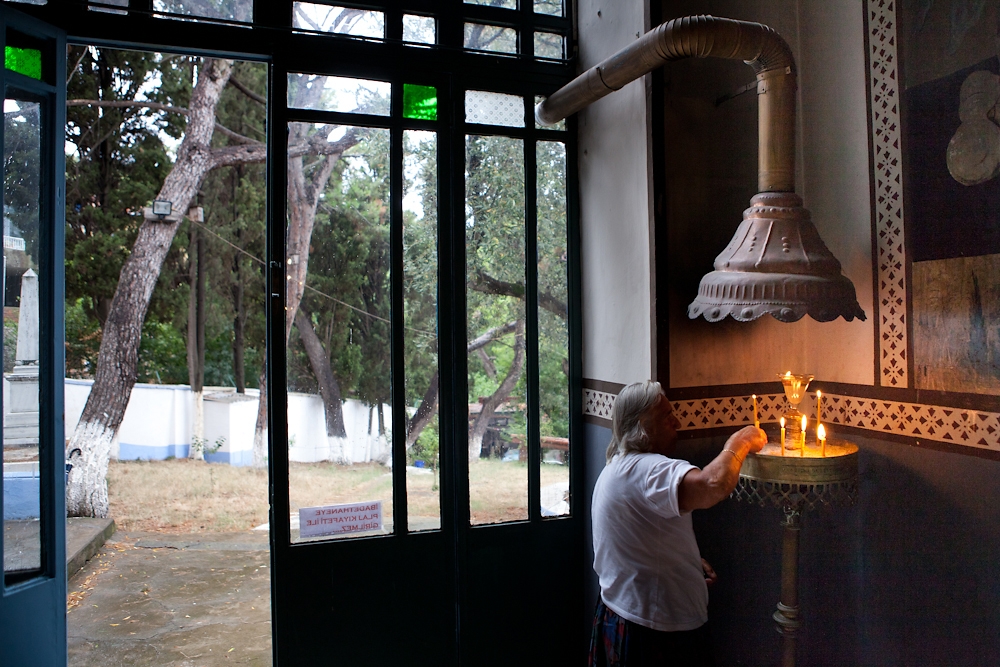 In order to protect many of the remaining frescoes, ventilation systems were installed to draw away the heat from candles. 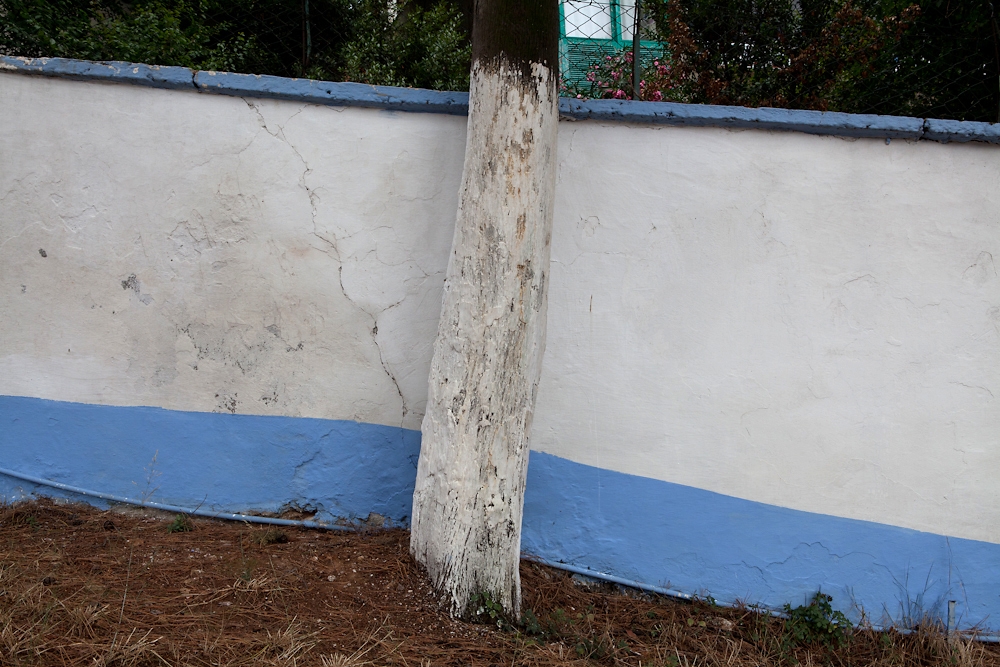 Inspired by the churches he had seen on Greek Islands, Güller decided to give the faded façade a new coat of white and blue. 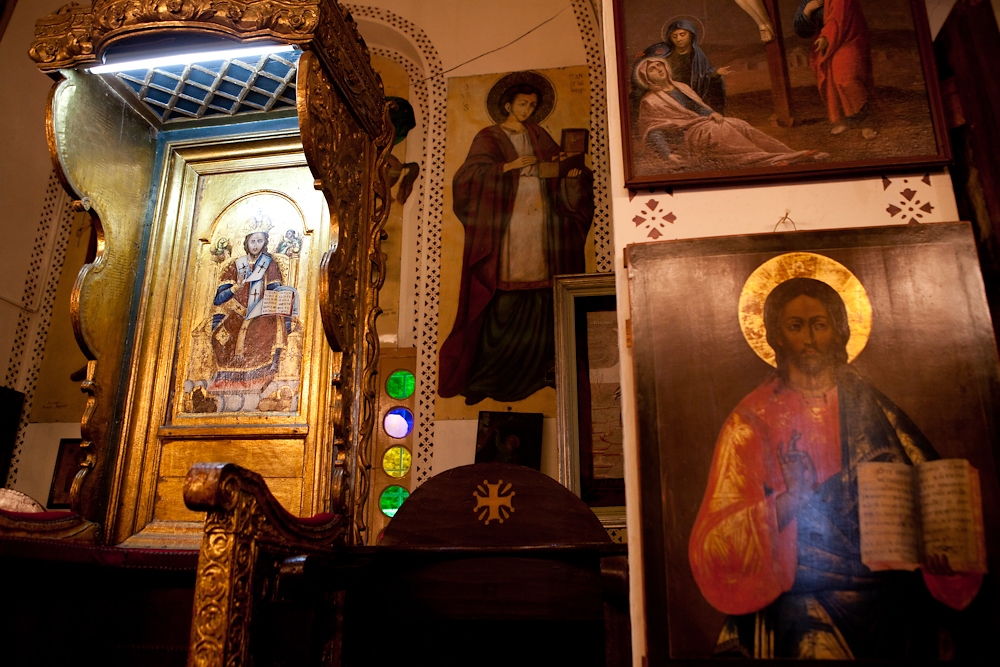 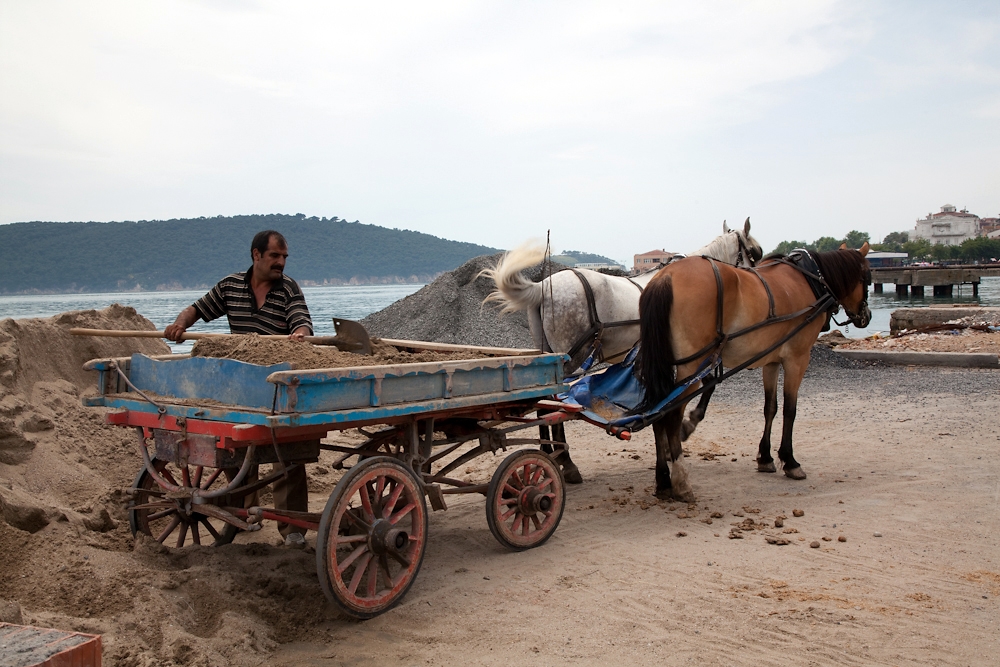 The islands have banned almost all motorized transport, leaving bicycles, walking and horses as the sole means of mobility. 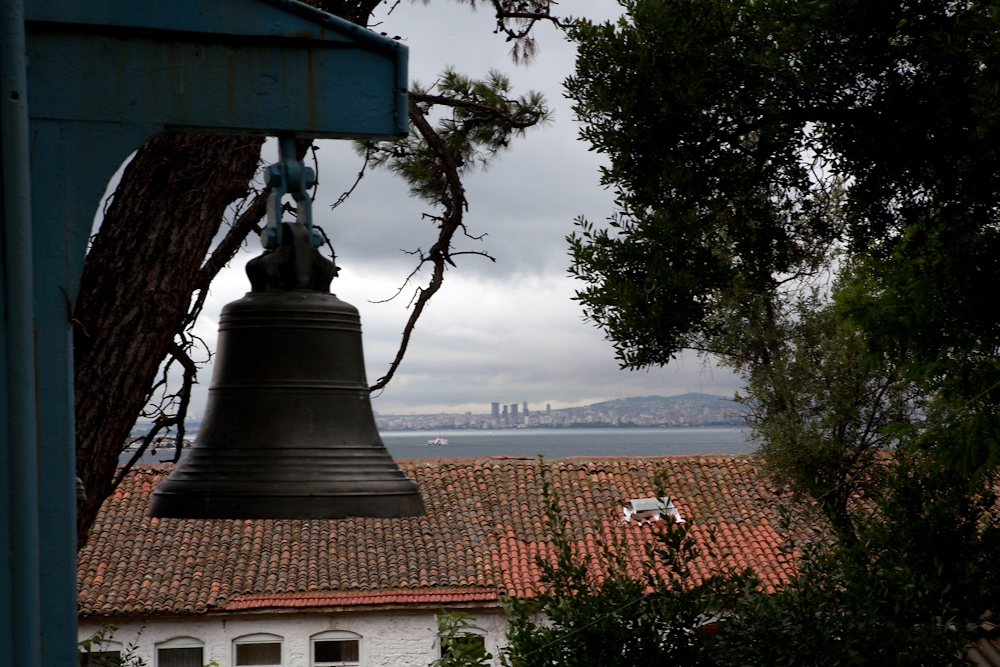 The island is within close distance of the towerblocks on the mainland Asian seashore of Istanbul. 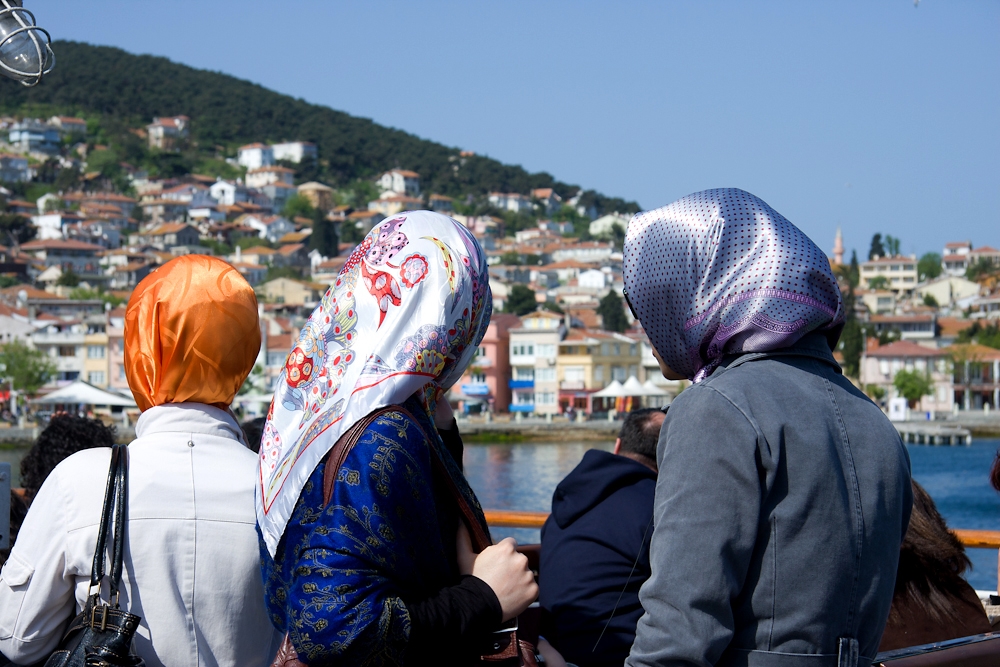 The Princes' Islands are named after the many Byzantine princes and Ottoman sultans exiled from the royal courts. 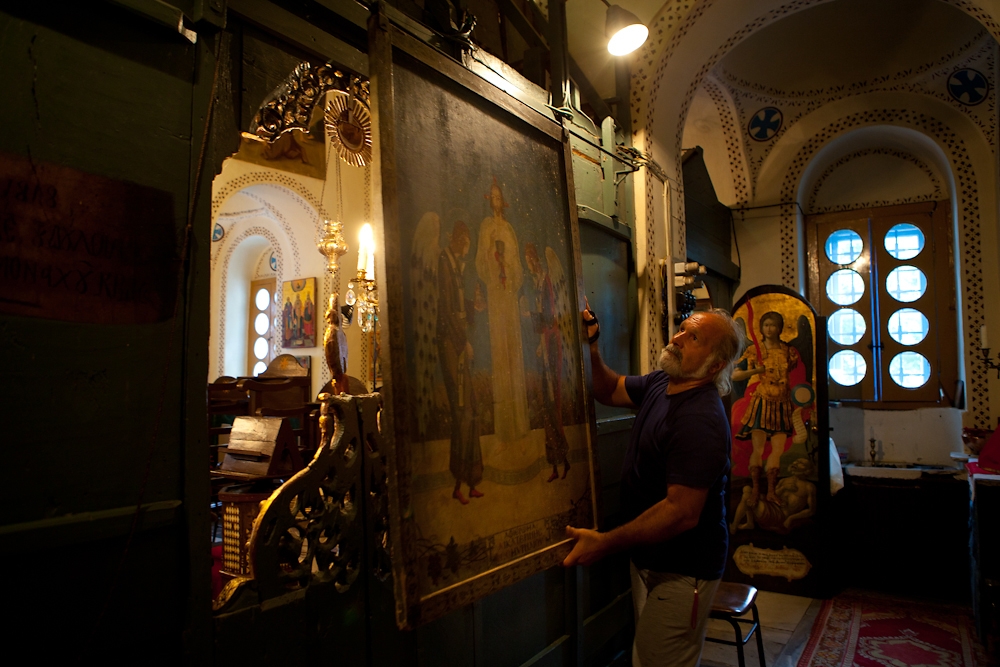 Güller pulls back a fresco covering the altar at the rear of the church. 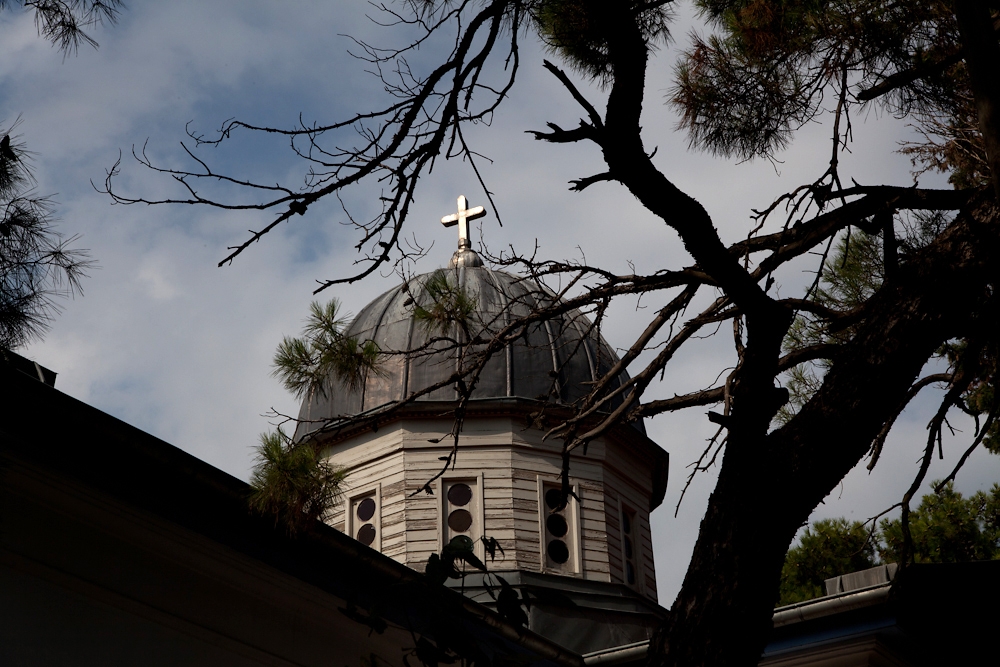 Every Sunday at 6 a.m., Güller tunes in to a religious radio station in Greece to broadcast a church service over loudspeakers.
prev
next

In 1972, Yorgo Güller, a Greek Christian from Istanbul, visited leafy Burgazada, one of the Princes’ Islands just off the city’s coast, looking for love. Almost forty years later, he is still there tending to a neglected, 18th-century Greek monastery.

Summer homes still line the vegetable garden of Aya Yorgi Garibi, which some believe translates as “Saint George the Destitute.” But the only year-round tenants are Güller, his Muslim wife, and 48 families of Alevi Shi’a Muslims, Turkey’s largest religious minority.

The tolerance at Yorgi Garibi recalls the days of cosmopolitan Constantinople, when Greeks numbered in the hundreds of thousands. But a land dispute dating to the expulsions of Greeks in the 20th century threatens that easiness. In an ironic twist, the Turkish government is now telling the low-income Muslim families to leave.

With the signing of the Treaty of Lausanne in 1923, Greece and the newly founded Turkish Republic declared a population exchange that led to an exodus of 1.2 million Ottoman Greeks from Turkey. The 110,000 Greeks living in Istanbul were technically exempt from that exchange. But the introduction of a so-called “Wealth Tax” on non-Muslim citizens in 1942, pogroms in the 1950s, and mounting tensions following the Cyprus crisis in the 1970s reduced their numbers in Istanbul to just 1,500 today.

Born in 1952, Güller only vaguely remembers hiding during the pogroms on September 6 and 7, 1955. At least 10 Greek-speaking Turkish citizens were killed and over 5,000 Greek homes, shops, churches and schools in Istanbul were destroyed and looted during the episode. Thousands of Greeks fled.

Fast forward to a more peaceful time. Güller is Aya Yorgi’s caretaker. Inspired by churches he had seen on a boat trip around the Greek islands, Güller gave the monastery’s faded green and yellow façade a new coat of paint. “Blue like the sky and white like innocence,” he said of the choice. “An Armenian friend of mine donated the paint. And then a Turkish friend and me painted the walls ourselves, tying ladders on top of each other because we didn’t have the money or the authorization for scaffolding.”

Greek families on the island asked him not to paint the church blue and white, the colors of the Greek flag, afraid Turkish authorities might see it as a provocation. To the neighbors’ surprise, the authorities were delighted. The local mayor voiced his approval, as did the commander of the nearby naval officers’ high school.

Because the Patriarchate does not send a priest to Aya Yorgi, Güller has installed loudspeakers around the chapel. Every Sunday morning at 6 a.m., he tunes in to a religious radio station in Greece to listen to a service. “The liturgies read in Istanbul churches are not as beautiful as I remember them being as a child,” Güller said. “Many of the priests just don’t care anymore because the congregations are so small now.”

Poignantly, today it is not the Greeks facing expulsion from this multicultural stronghold, but the Alevi families. A priest in the 1970s invited the Alevis – originally migrant workers – to stay as thanks for helping him take care of the facilities. Though the acres they tend outside Aya Yorgi’s walls have belonged to monastery since 1884, when a wealthy Greek family donated them, disputed regulations dictate that land Greeks left behind must be ceded to local authorities. A Turkish foundation now lays claims to the property.

Until the 2000s, when real estate prices boomed on the Princes’ Islands, no one had sought ownership. But in 2010, a court awarded the property to the foundation.

Though Aya Yorgi itself is not threatened, Güller says its way of life is and vows to fight for the monastery’s Muslim friends.

“Aya Yorgi Garibi has always been a shelter for the destitute,” Güller, who has led an appeal to the European Court of Human Rights over the evictions, enthused. “This is blatant injustice. … And with God’s help, everybody will be able to stay.”