Turkey Cool to Azerbaijan's Request for Extradition of Karabakh Visitors 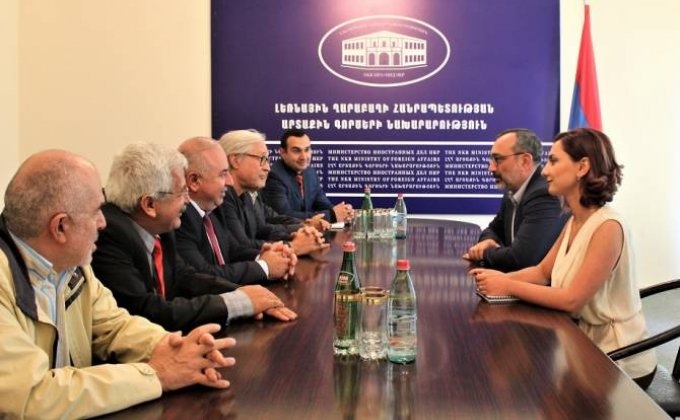 A group of Turkish leftist activists meet with the de facto foreign minister of Nagorno Karabakh on September 23. (photo: nkr.am)

The case recalls that of Russian-Israeli blogger Alexander Lapshin, who was extradited from Belarus to Azerbaijan, imprisoned for seven months for the same offense, and released last month. Turkey, however, in spite of being a close ally of Azerbaijan has not shown much inclination to follow Belarus's example.

The Turks, all leftist politicians and activists, visited Karabakh last month in support of better relations between Turkey and Armenia, which remain frozen over the disputed territory, internationally recognized as part of Azerbaijan but now controlled by Armenian forces.

"I think the border with Armenia should be unconditionally opened, as the most part of Turkish society support the normalization of relations with Armenia, opening the borders,” said one of the activists, Said Çekinoğlu, at a roundtable in the de facto Karabakh capital of Stepanakert.

But Azerbaijan, which sees Turkey as its greatest ally, took a different view. “The actions of these persons, known for their pro-Armenian position, do not reflect Turkey’s official stance,” said Prosecutor General Zakir Garalov in announcing criminal charges against the men. “They expressed support for PKK terrorist organization and propagated the establishment of an independent Kurdish state.” Azerbaijan has also said the men have been put on an “international wanted list,” but have not specified which list.

Turkey has responded noncommittally to the request for an extradition. “Turkey will continue to support Azerbaijan’s fair position on the settlement of the Nagorno-Karabakh conflict,” Turkish Foreign Ministry Spokesperson Huseyn Muftuoglu said in a statement on September 30, without mentioning the extradition request.

Turkey and Armenia lack formal diplomatic relations and their mutual border has been closed since 1993. There have been attempts to reconcile the two counties. In 2009, protocols brokered by the U.S. would have restored diplomacy and opened the border.

But the deal fell apart after opposition from both Azerbaijan and Turkish President Recep Tayyip Erdoğan, then prime minister, who said any normalization would first require peace in Karabakh.