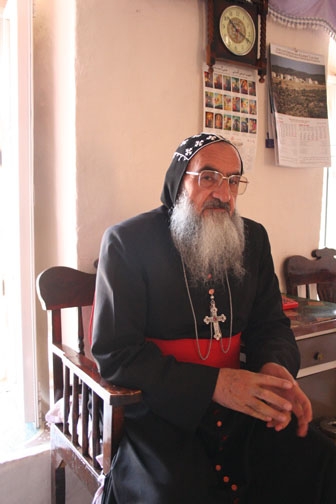 A court ruling that allows the state treasury to seize a large chunk of the land belonging to an ancient Assyrian monastery in southeastern Turkey is being described by critics of the decision as a major setback for Ankara's efforts to reform the way non-Muslims and their property are treated in the country.

The ruling, by the Supreme Court of Appeals in Ankara, allows for close to sixty percent of the land belong to the centuries-old Mor Gabriel monastery to be expropriated by the state, on the grounds that the property belongs to the treasury rather than to the monastery, which has been in existence since the year 397 and has been a major center for Assyrian Christians since that time. The Bianet website has a quick rundown of the case:

The heads of three villages in Mardin's Midyat district filed a complaint with the Treasury in 2008 during cadastral [land registration] work in the area on the grounds that the monastery was occupying 276 decares [100 acres] of territory owned by local villagers.

The treasury filed a "land registration" suit, and the court subsequently dismissed the case, arguing that the church had been in possession of the estates in question since archaic times, that it had declared its estates prior to the 1936 Proclamation and had been paying its taxes on a regular basis after 1937.

The treasury then proceeded to appeal the decision, and the 20th Section of the Supreme Court of Appeals subsequently claimed the defendants had not presented any tax records pertaining to their real properties despite the earlier court statement that the church had been paying its taxes since 1937.

The Supreme Court of Appeals further argued the defendant parties had not presented any documents regarding their declaration to the Foundations Directorate General in 1936.
The monastery responded by indicating they had already presented the relevant documents in 2009 and attached them to the file once more, but to no avail.

The case (which was the subject of a more extensive 2009 article in the Wall Street Journal) has caught the attention of the European Union, which has expressed "serious concern" about the recent court ruling. For human rights activists, the fact that the treasury pursued this case so vigorously is being seen as a worrying indication that the Turkish state could be reverting to some bad habits regarding its treatment of non-Muslims, particularly when it comes to property rights. Writes human rights lawyer Orhan Kemal Cengiz in Today's Zaman:

This is exactly the same Supreme Court of Appeals which deprived non-Muslim foundations of all their properties before. Seeing non-Muslim citizens as “indigenous foreigners,” a term once used by it, is embedded in its genes. However, the other part of the story needs quite a serious explanation. How can this government, after developing all these minority-friendly policies, be the architect of such a deeply embarrassing action against our handful of Aramean citizens and their ancient church?

What makes the court and treasury action against the monastery all the more dissapointing is that it actually comes in the midst of a slow revival of Assyrian life in southeastern Turkey -- the ancient Christian community's historic heartland -- after decades of decline. Among the more positive developments to have taken place in recent years have been the launching of a new Assyrian newspaper in the city of Mardin, located near the Mor Gabriel monastery, and the reopening of two long-closed churches by Assyrians who had returned to the region after living in Europe.