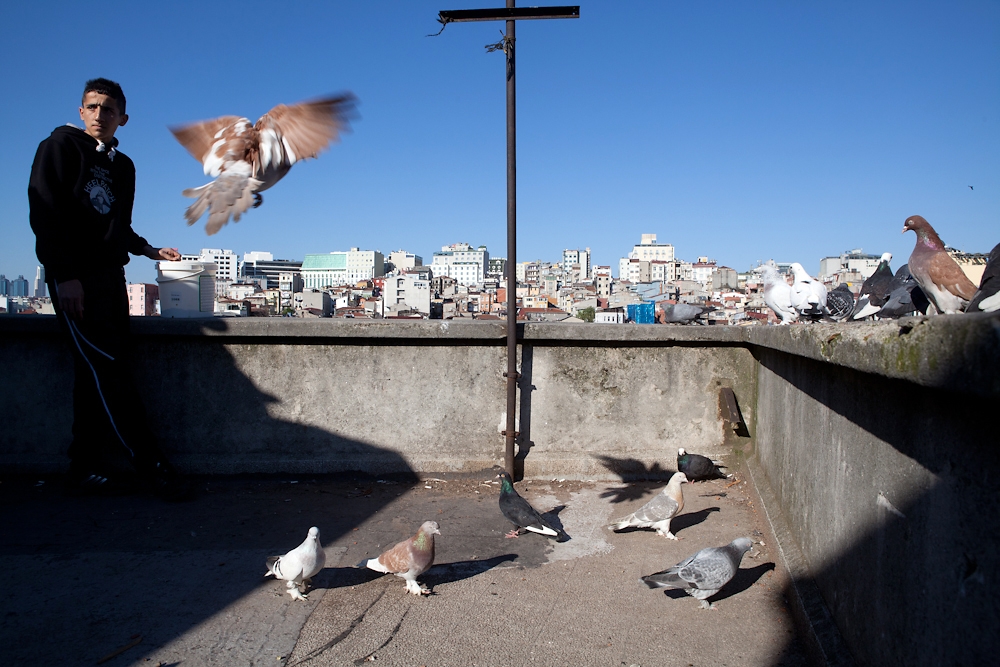 Murat exercises his brother's pigeons on the top of a building, where they have a loft in Tarlabasi. 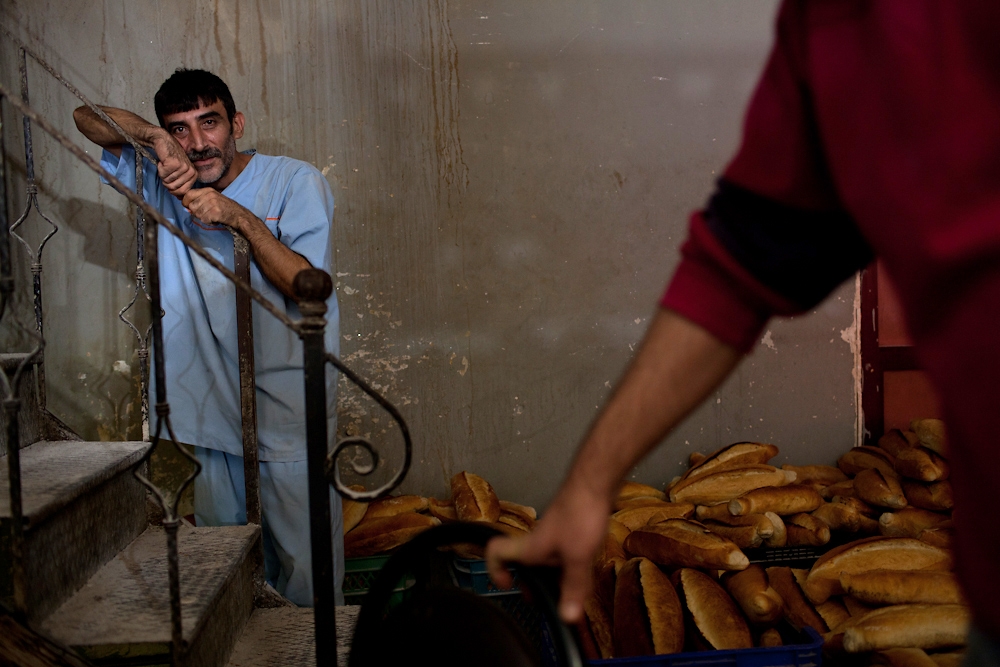 Bakers used to sell 7,000 loaves of bread a day. But many closed when evictions brought down sales to less than half. 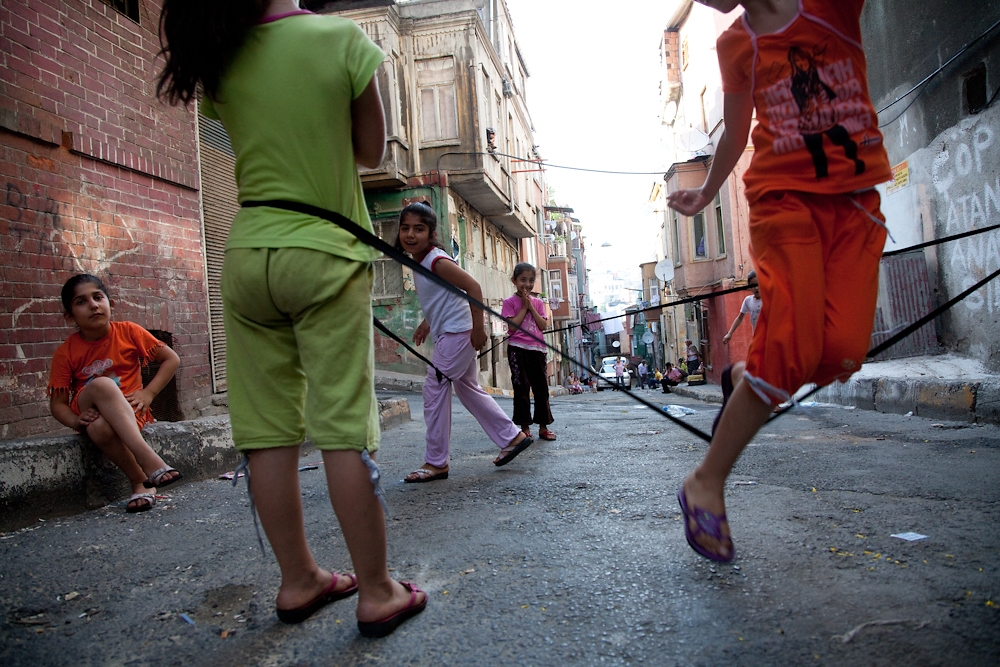 Children play homemade games outdoors for hours during the day. 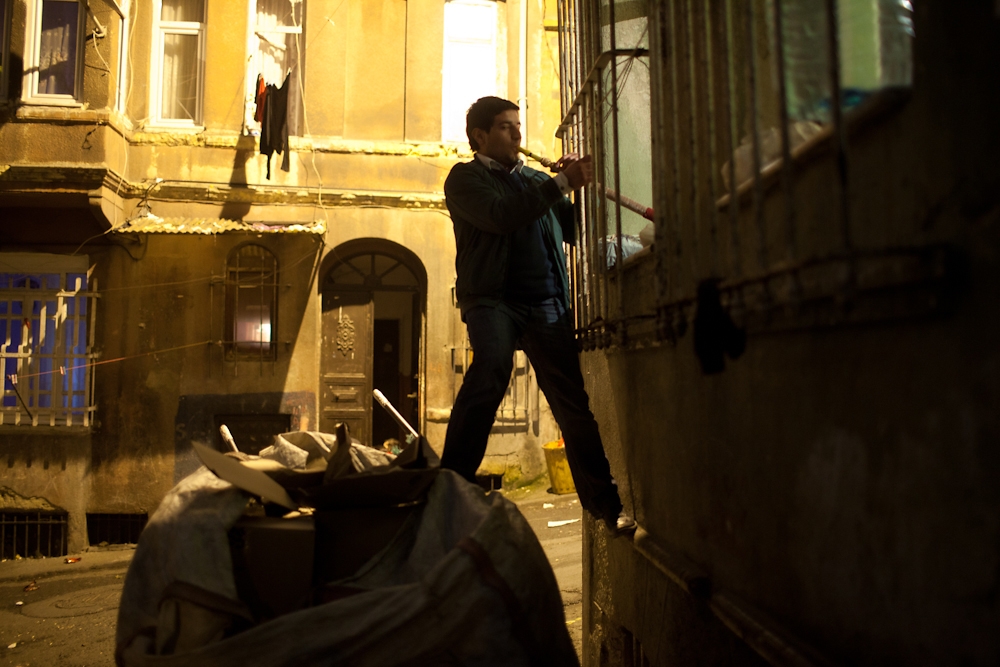 Late at night a recycling worker grabs a puff off a water pipe through a friend's window. 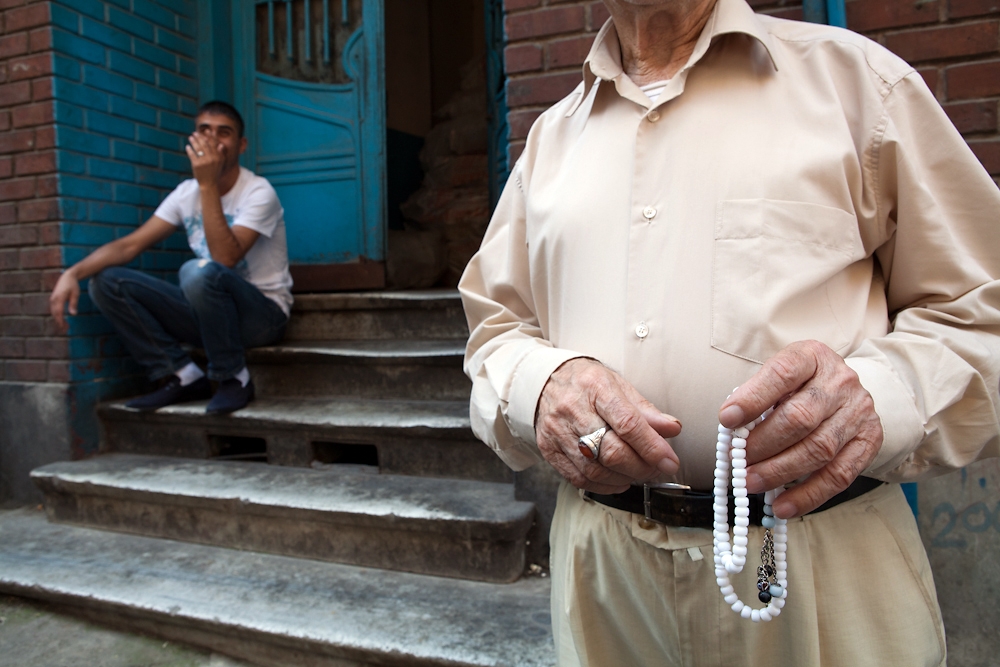 In a sign of Tarlabasi's past there are only churches in the district. All the mosques are on the outskirts. 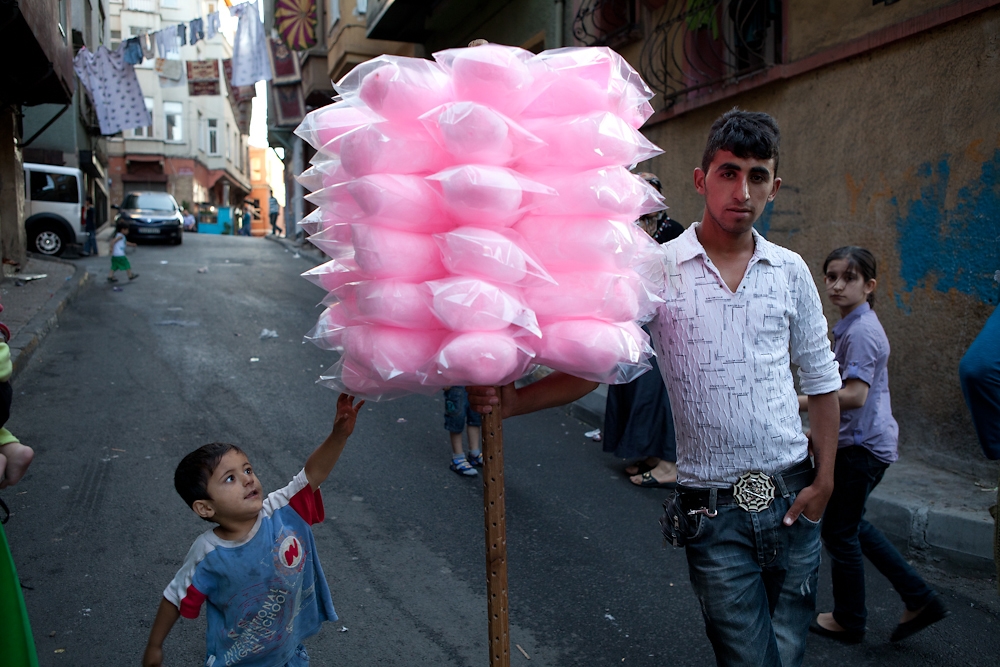 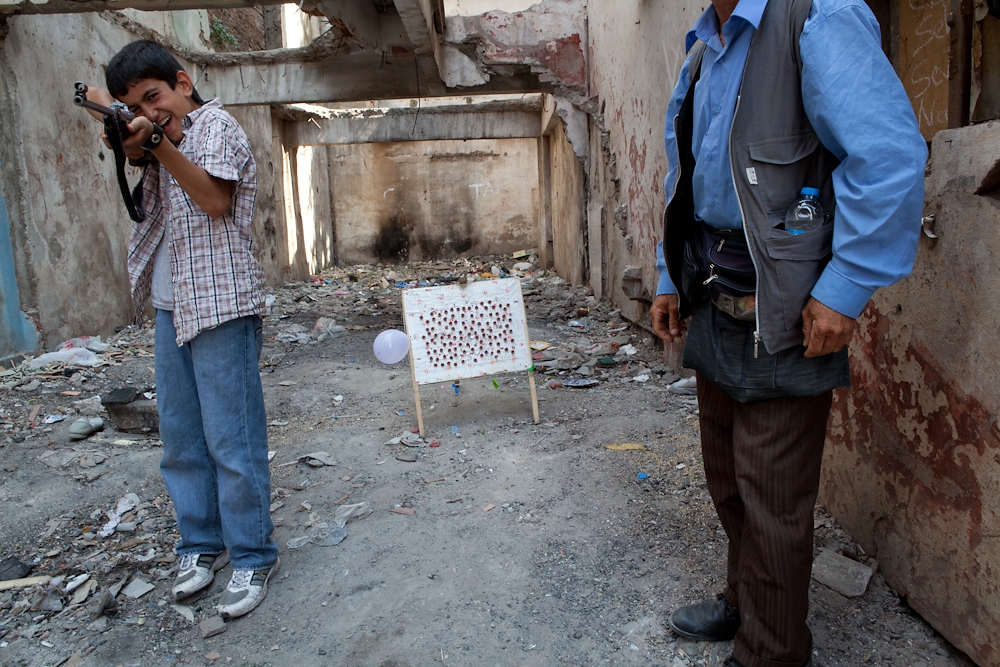 In the shell of a demolished building, a local man has set up an air rifle range. 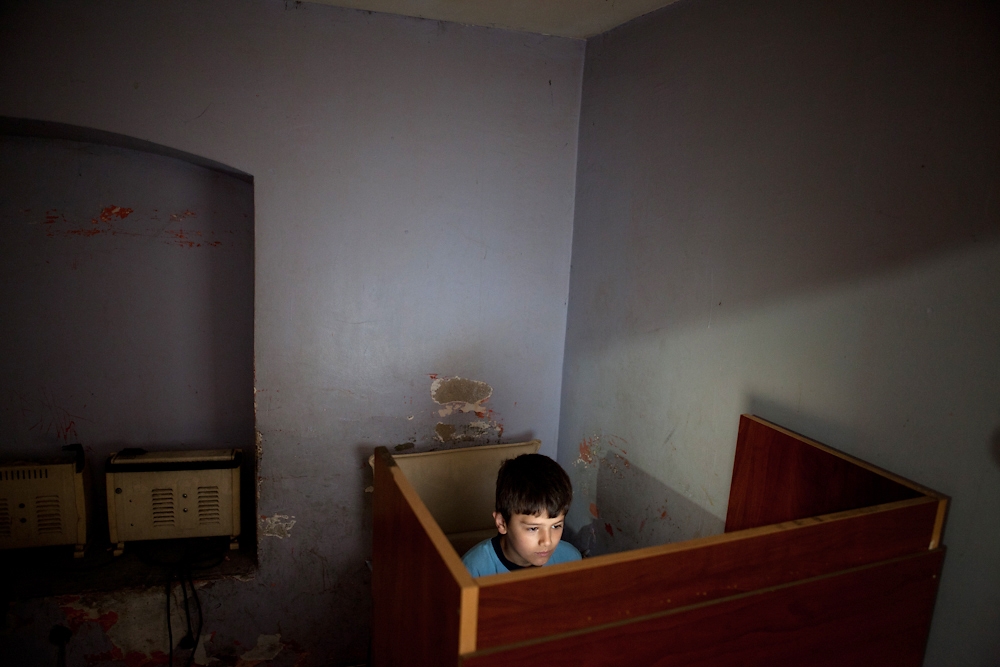 A boy is fixated on a computer screen in an internet cafe. Home internet connections are rare in Tarlabasi. 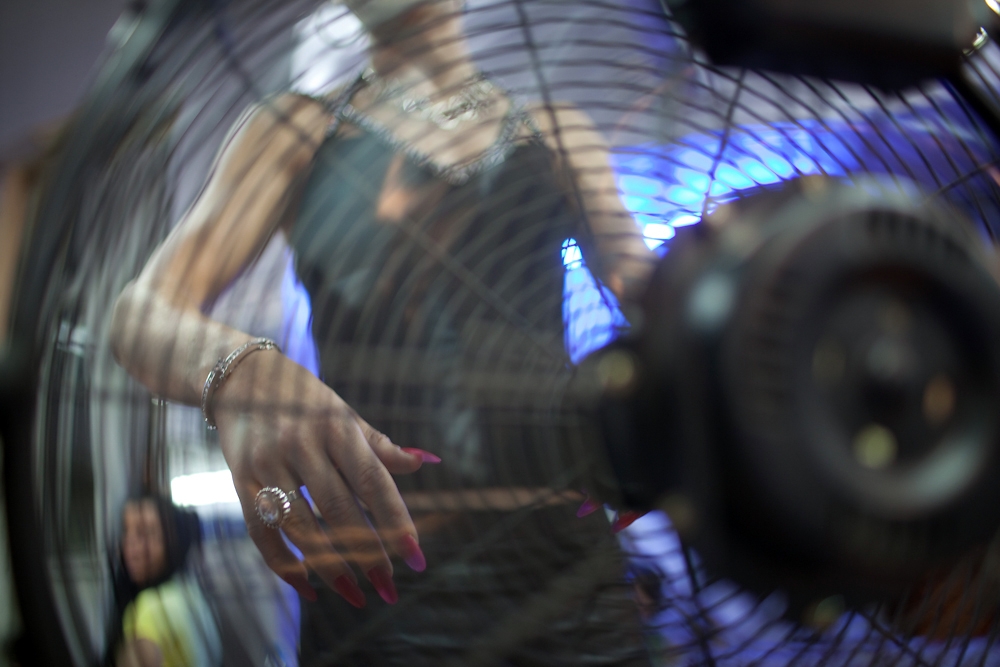 Before heading out to work for the evening, a transgender sex worker dries her nails in a Tarlabasi salon. 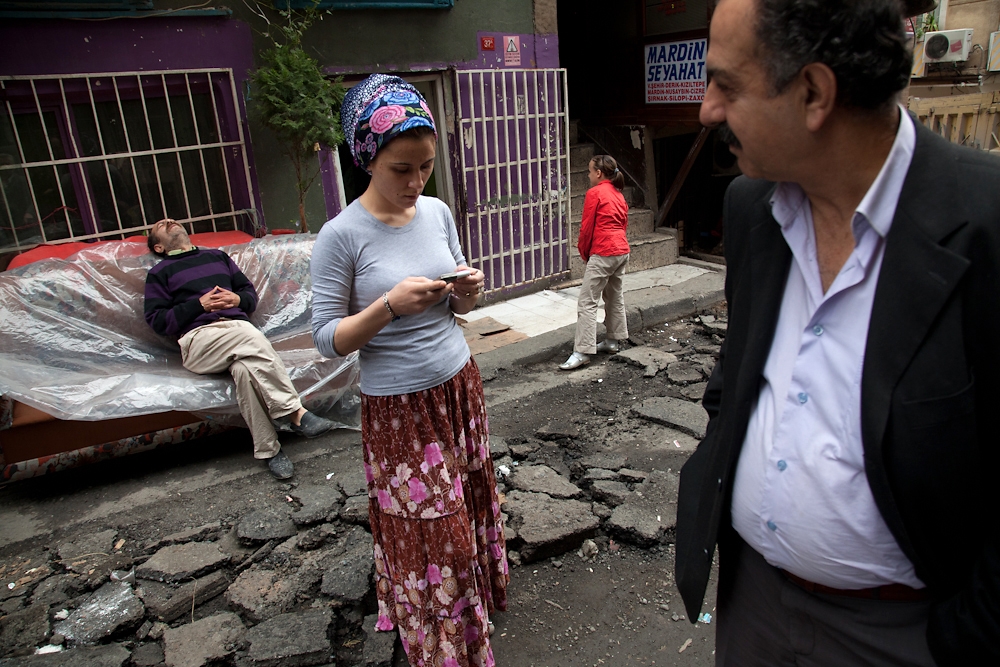 Torn up pavement hints at the resurfacing of a road that may soon help trucks access parts of the neighborhood for demolition. 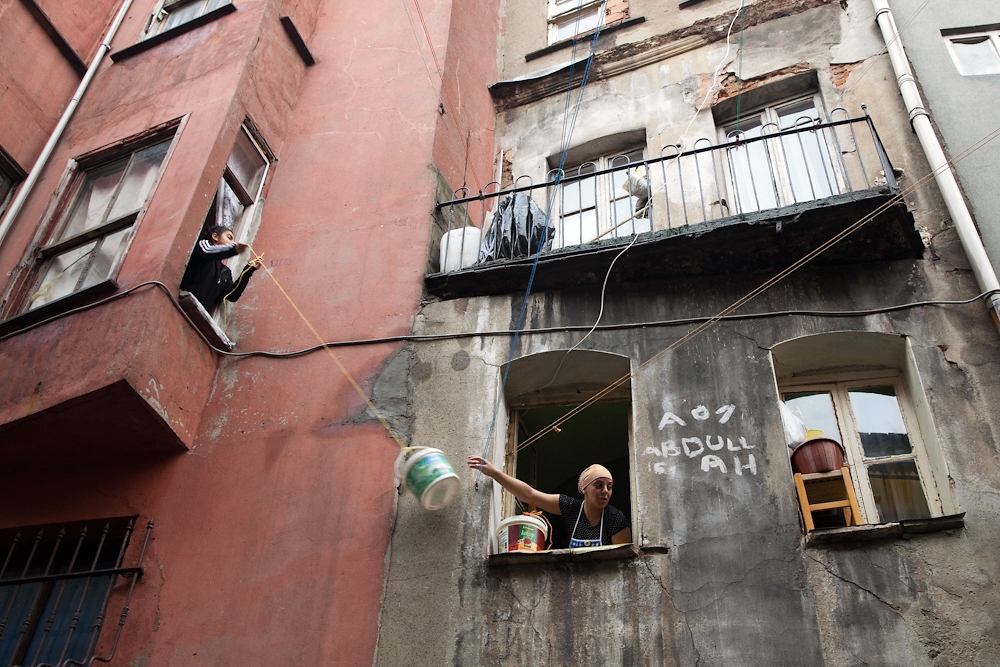 Residents use buckets and rope to pass items between neighbors. 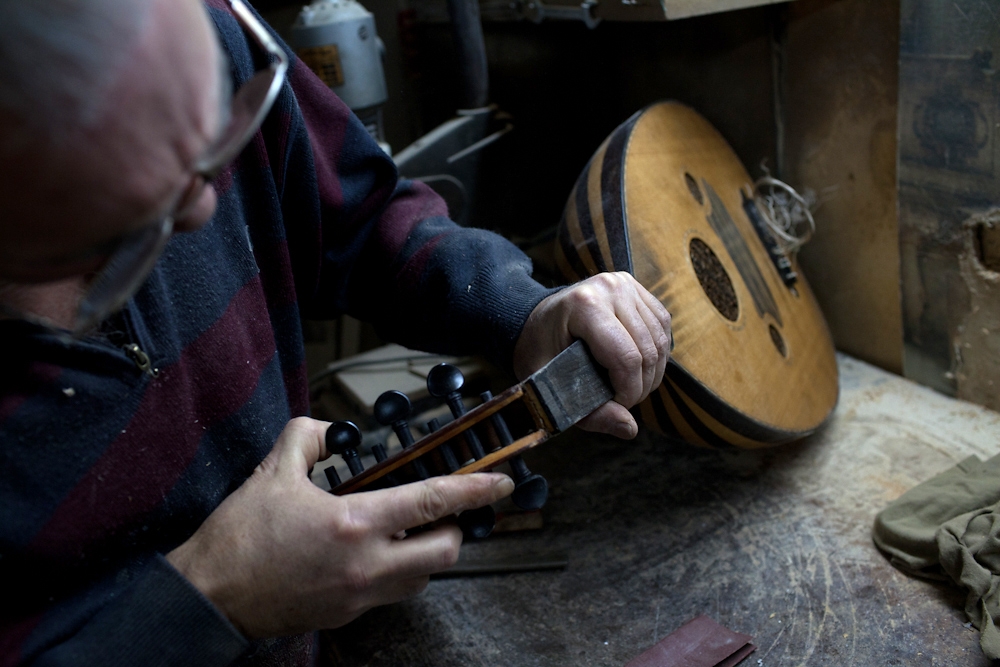 A local oud maker studies an older instrument so that he can undertake repairs. 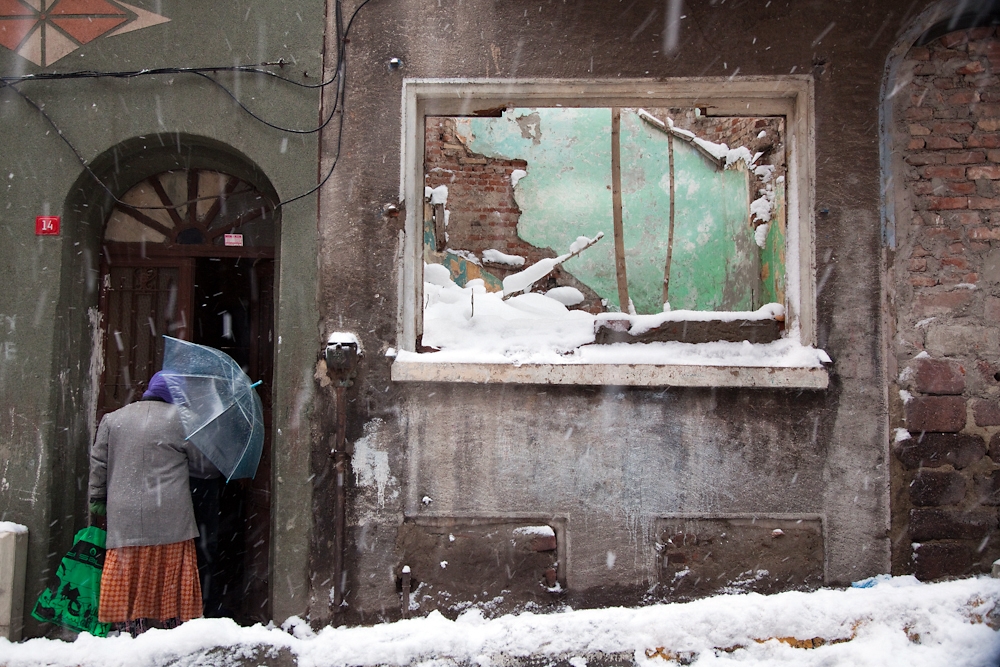 Many of the buildings have fallen into disrepair due to disputes over ownership. 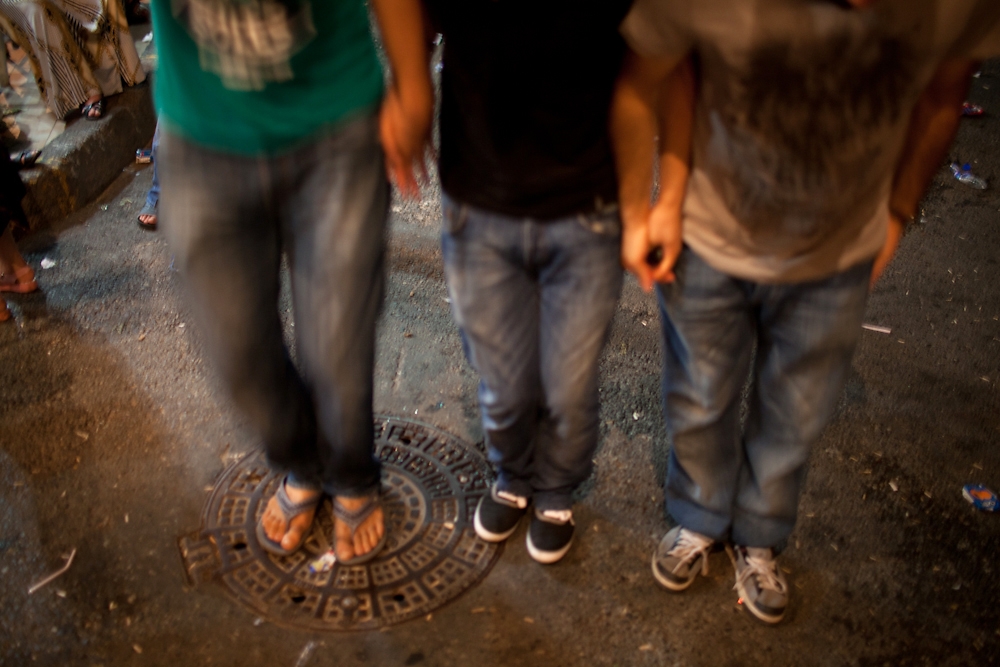 Kurdish men dance at an engagement party on a warm summer evening. 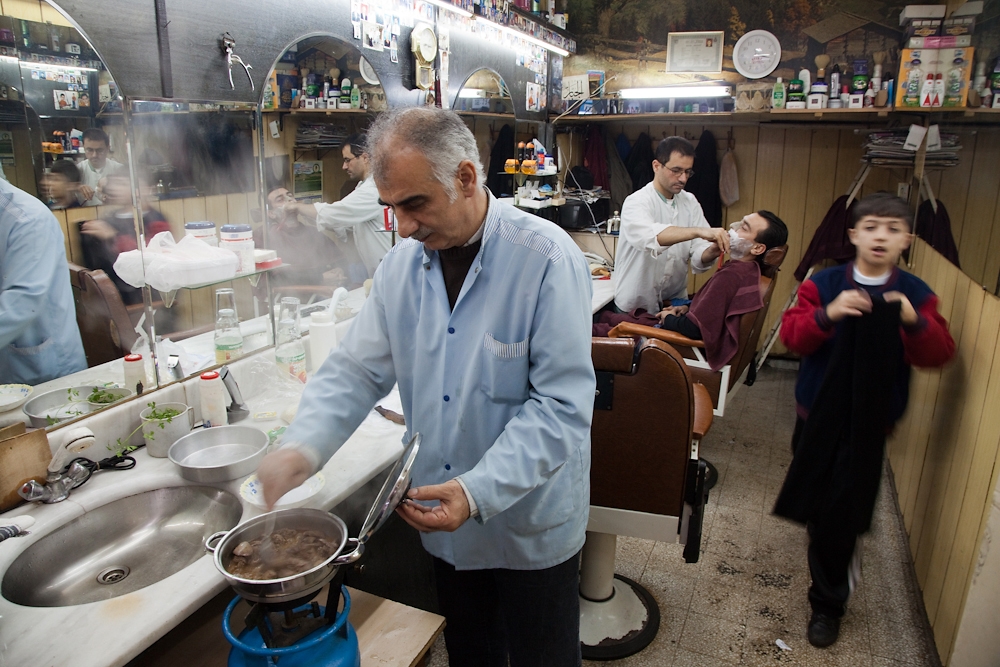 Hasan the barber prepares lunch while his colleague Ali shaves a customer. 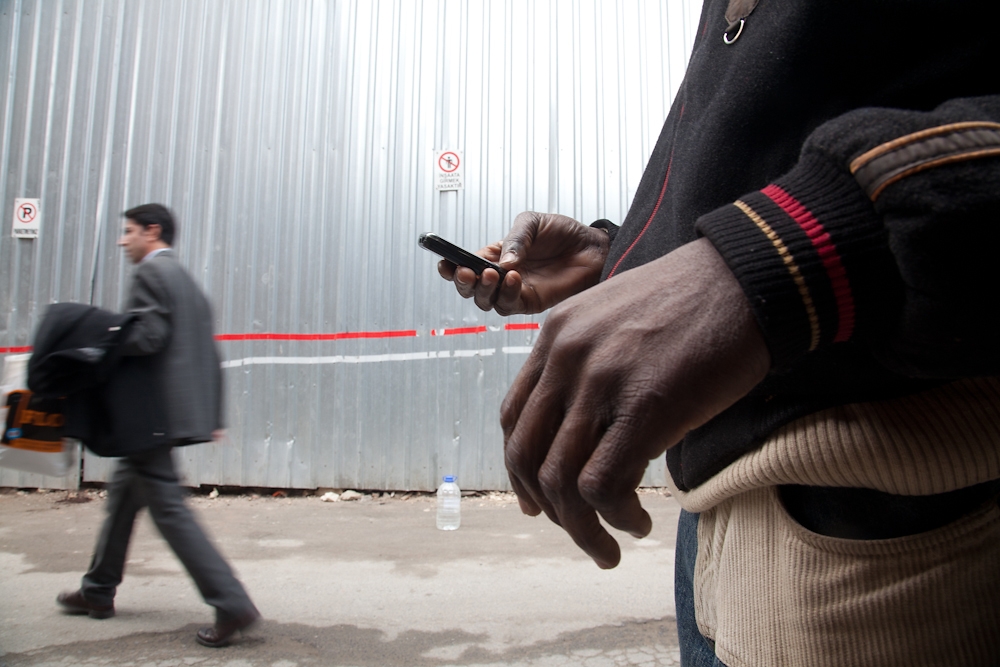 Tarlabasi is a safe haven for many of the migrants passing through Istanbul on their way to Europe. 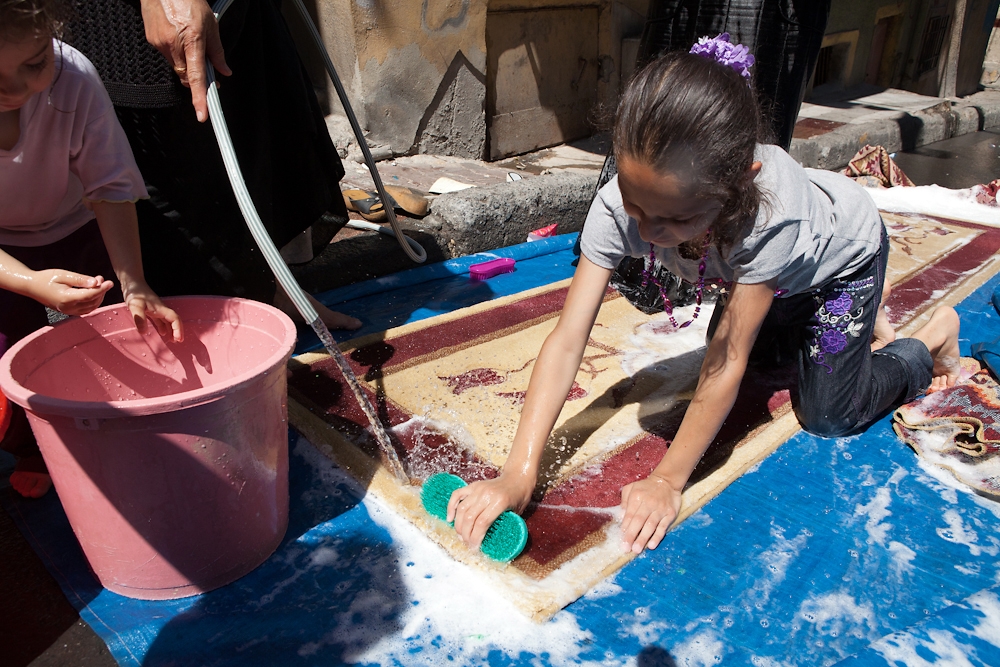 A girl helps her mother clean carpets outside their home. 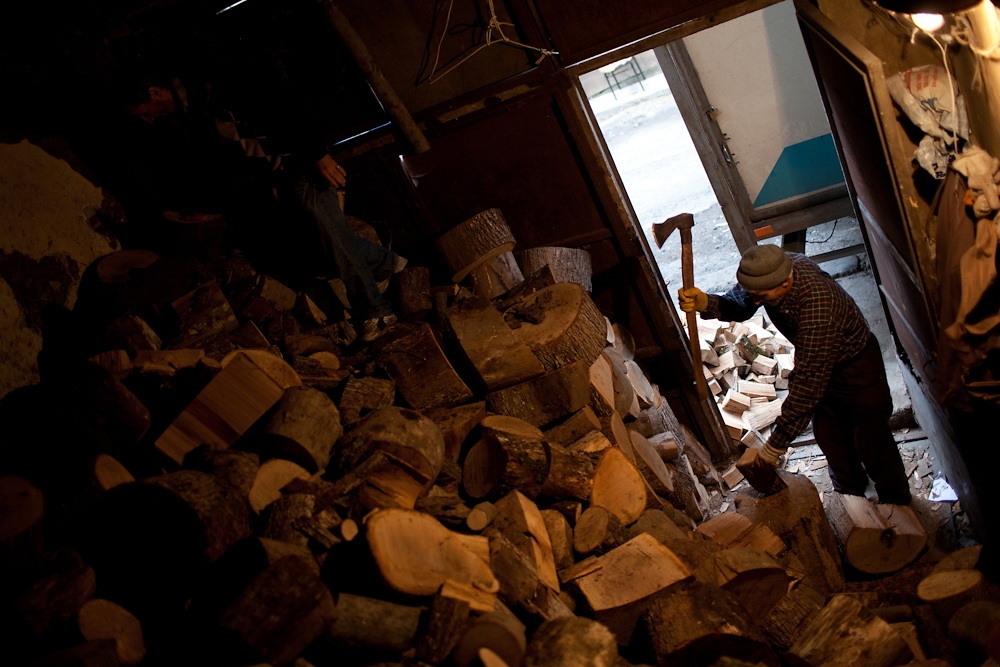 The owner of a small wood-fuel business chops logs in preparation for winter demands. 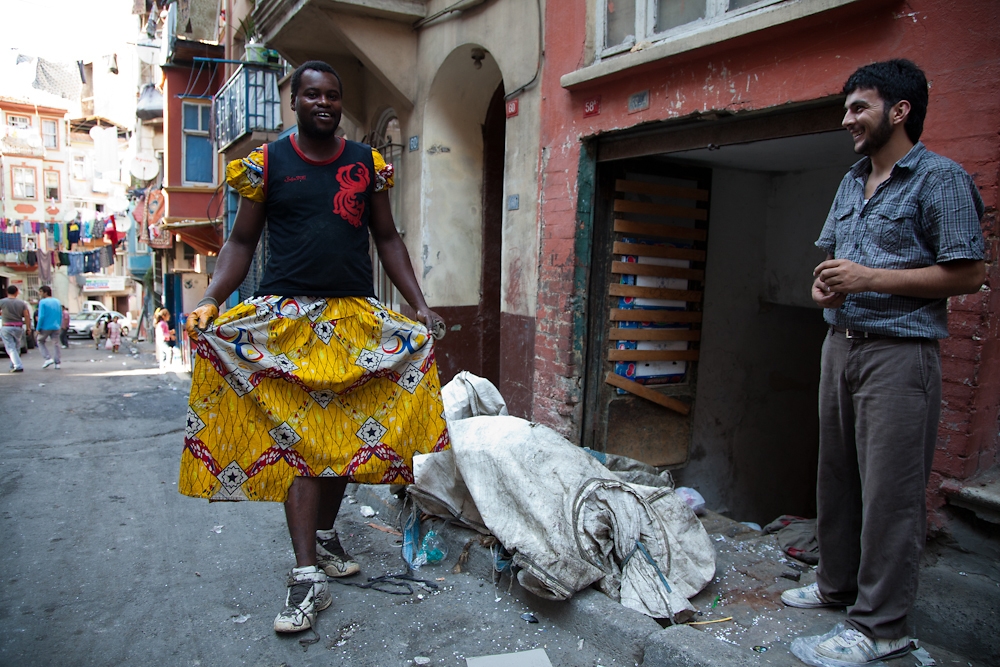 Workers in the recycling shops come across many items they can re-use in their jobs. 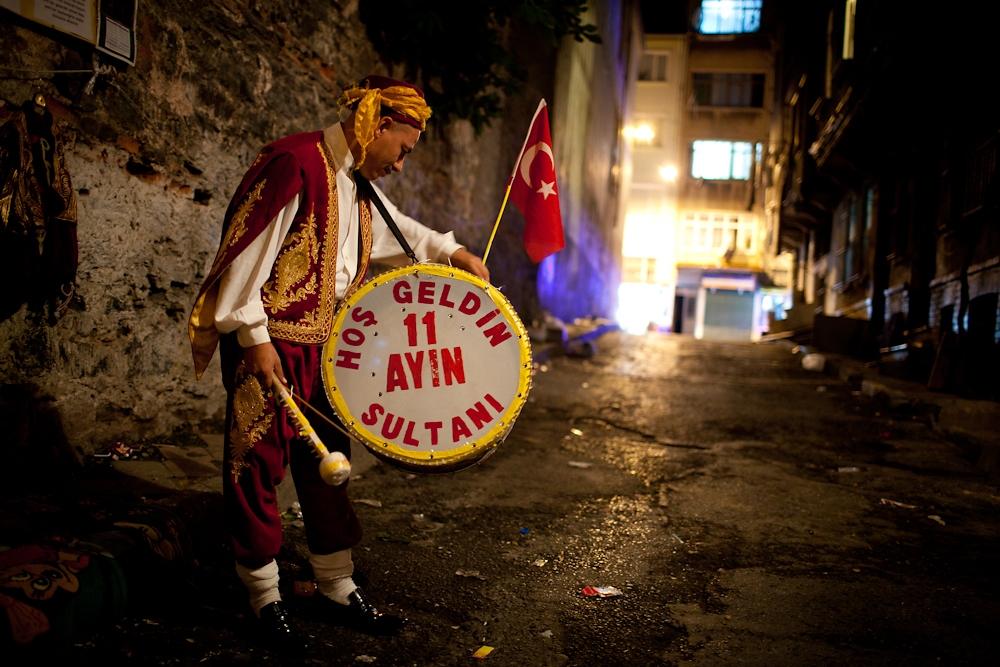 During Ramadan, a drummer dressed in traditional Ottoman clothes, wakes the faithful at night so they may eat before sunrise.
prev
next

Architects in 2009 described Istanbul’s downtown neighborhood of Tarlabaşı as an unsafe place for children -- a district whose destruction and reconstruction would be in the interest of its residents.

Few dispute that Tarlabaşı is run-down and that many of its residents live below the poverty line. But the congested neighborhood is also one of the few remaining places in the city center where there is affordable housing for the urban poor.

Despite its appearances, Tarlabaşı is a vibrant community comprising not only multiple ethnic groups -- Turks, Armenians, Greeks, Roma, Kurds and African migrants – but, also a diverse array of social groups, ranging from devout believers to transgender sex workers.

That mix of residents allows for social interactions that would be considered impossible elsewhere. For instance, an informal arrangement enables workers from a transgender brothel drink tea, play cards and have lunch at a next-door café that caters to Kurdish working men. Brothel customers, however, are unwelcome.

This reality is not something discussed in Turkish media. Instead, media outlets tend to emphasize the district’s reputation as a hotbed of crime, a place of danger for anyone who is a non-resident.

Residents themselves point out that Tarlabaşı is not a utopia where tolerance is the norm. Many say they simply have no other place they can go, and thus must form uneasy alliances with their neighbors. “We have no other option but to rent in Tarlabaşı” said one transgender sex-worker. “Normal landlords won’t rent to transsexuals and prostitutes; anywhere else and we’d be killed,” she said.

The prospect of having to relocate is something residents can not ignore any longer. Evictions have started, provoking complaints from international rights organizations. In a report issued in mid-July, Amnesty International underlined that “dozens of families in the Tarlabaşı district are facing forced eviction. … They have been subjected to intimidation and threats by the local Beyoğlu municipality and law enforcement officials.”

Amnesty demanded a halt to the evictions and an investigation into the eviction procedures. City officials rejected “Amnesty’s findings.”