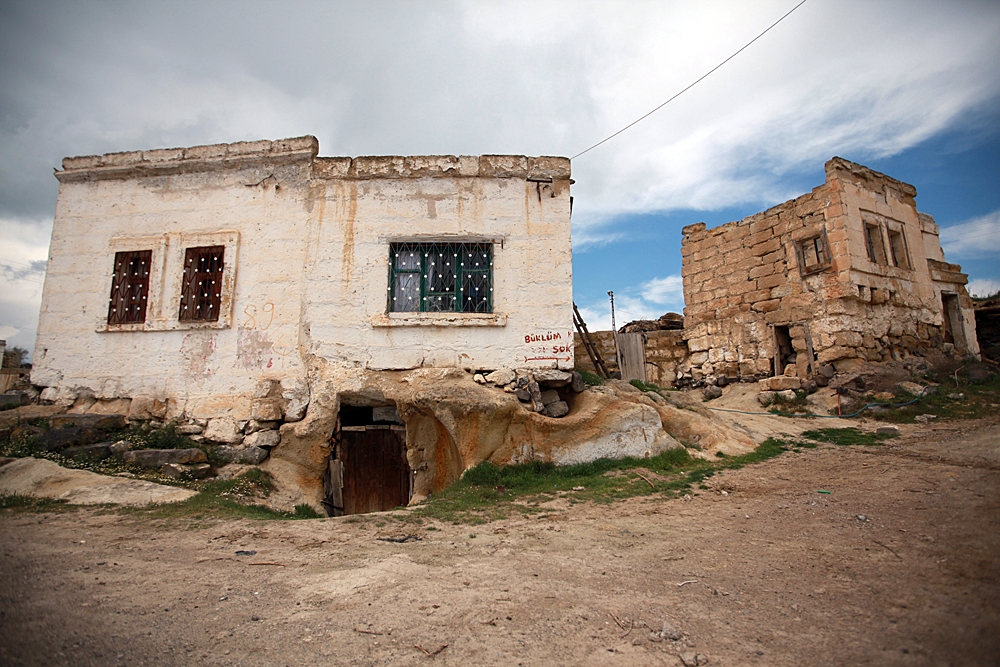 In some condemned areas of Tuzköy, a community of about 2,000 people near Nevşehir in central Turkey, families have refused to leave, saying the new houses built by the government are too small. (Photo:

Ümit Balak may be the only mayor in the world who is campaigning to bury his own village.

Tuzköy, a community of about 2,000 people near Nevşehir in central Turkey, is blighted by an epidemic of cancer and lung disease linked to erionite, a rare and highly toxic mineral present in local rocks.

"In the course of time, we hope this place will be completely covered in soil, planted with trees, and that no one will again die of cancer," Balak said.

That drastic solution is now closer to becoming reality. Last month, authorities concluded a process that allowed villagers to apply for new housing being built nearby. A tender for the construction of the houses is now beginning, and they are expected to be built within 18 months, paving the way for the burial of the old town.

It comes after three decades of government inaction, but now residents are angered that they may be forced to pay for their new homes. "Some people have money, but many don't, and it's putting many people into debt," commented Gürbüz Eryılmaz, the 50-year-old headman of Tuzköy's Yeni neighborhood.

Until its connection with erionite was discovered in the 1970s, many of Tuzköy’s residents viewed the illnesses in their midst as a curse. "Back then, we didn't know about the erionite. We knew it was cancer, but we didn't know why," said Eryılmaz. Like most residents interviewed by EurasiaNet.org, he has lost several close relatives to the disease, including his father, who died at 35.

Researchers investigating naturally occurring asbestos first came to Tuzköy, and a nearby village, Karain, in 1975. In both places they were puzzled that, although there was no asbestos, rates of mesothelioma -- a cancer associated with the material -- were many times higher than at asbestos-affected areas.

Rock samples from the villages revealed erionite, a hitherto little-known volcanic mineral composed of woolly fibers. Subsequent animal tests have revealed the mineral to be between 200 and 800 times more carcinogenic than asbestos.

While the mineral occurs in several places in the world, it is only in these villages where it comes into close contact with humans. Residents were ingesting it in their food and breathing it in from the air. "Villagers went to the local mines, cut stones and made their houses from it," elaborated Dr Salih Emri, a pulmonary specialist at Ankara’s state-run Hacettepe University, which conducted the studies. "Sometimes they put their food in the cellars cut beneath their houses, and there is erionite there, too."

The Hacettepe researchers’ studies suggested that around half of all deaths in the villages were linked to erionite. Seven years’ exposure is enough to contract mesothelioma, which is nearly always fatal, Emri noted. "No matter where you move, you can still develop it if you were exposed."

But when Tuzköy Mayor Balak was elected in 2004 on the ticket of the new Justice and Development Party government, he was able to lobby local politicians who brought the villages' plight to the attention of Prime Minister Recep Tayyip Erdoğan.

In 2006, 245 new houses were built on safe ground less than a kilometer from the old village. An additional 141 are now being built to house the remaining villagers, and a similar plan is underway in nearby Karain.

Many, however, are not happy. Those who have already moved have been forced to take out loans of 29,000 Turkish lira ($15,865) to pay for their new homes. Remaining villagers recently had to sign loan forms for an as-yet-unspecified amount.

In a statement, Turkey's Disaster and Emergency Management Directorate said the law obliges it to charge residents for the new accommodations. The loans for the houses, it added, would be "very favorable.” The loans are interest-free and can be paid back over a 20-year period.

Balak hopes to persuade the government to write off the debts. Villagers who moved out of Tuzköy six years ago told EurasiaNet.org that they still have not been asked to begin payments.

Many are happy with their new houses, which, though smaller, have spacious gardens, good views, and modern electrical systems and plumbing, which their former residences lacked.

In spite of the health risk, though, many villagers continue to use their old homes to accommodate growing families. Twenty-five-year-old Emel Açıkgöz, her husband, and their three young children, aged between three months and six years old, live in the home in which her father grew up, in a condemned part of Tuzköy.

Açıkgöz’s mother died of cancer at the age of 33, another relative died six months ago, and still another is in the hospital with little expectation to survive.
For her children, there is hope that if they leave their current home soon, the length of exposure will not be dangerous.

For Açıkgöz and others who have spent more than seven years of their lives in Tuzköy, however, the heightened risk of contracting cancer is something they will always live with.

"Of course we're worried, but there's nothing we can do,” she said.